Donald Trump is the white boomers' last gasp -- believe it or not, the future looks brighter 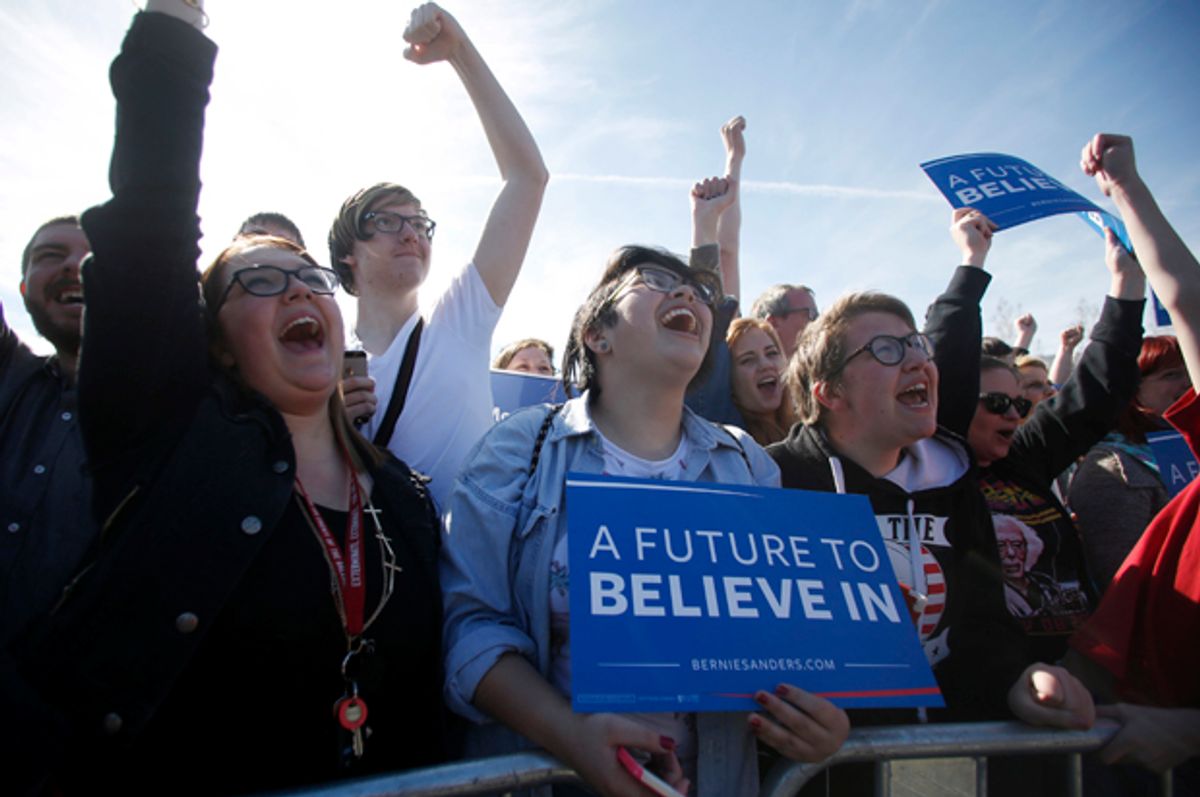 The presidential election of 2016 has not involved a public policy debate as much as it has chronicled the ongoing struggle of Donald Trump to resemble a sentient and literate human being. As he continues to fail, it becomes increasingly clear that the reality television star, and his group of goblin advisors – Rudy Giuliani, Newt Gingrich, Chris Christie, Steve Bannon – represent the last gasp of the white conservative baby boomer.

Throughout the 1970s, ’80s and ’90s, the straight white male boomer’s story enjoyed cultural hegemony. To live as one of these men was to have an all-access VIP laminate around your neck, and a lifetime permission slip in your pocket. You could view and treat women as toys for your personal amusement, denigrate gay men as freaks fit for the circus, and stratify men of other races into a category of inherent inferiority. Life was good for the white male boomer, but suddenly it all started to end. Uppity blacks started to demand liberty and inclusion. “Nasty” women began to assert themselves as equals, and LGBT people demonstrated themselves to be “normal” folks as capable of achievement and decency as anyone else. Each morning the conservative white boomer wakes up realizing that his story matters a little less than it did the day before.

Faced with the erosion of their cultural power, coinciding with their own mortality, conservative white boomers could adjust and adapt to reality, keeping an open mind to new developments, while welcoming the diversification of American institutions, still cognizant of the amazing run of prosperity and influence they enjoyed. Or they could throw a temper tantrum. Most of them, already detached from the real world, opted for the latter.

The United States currently has the highest standard of living in its history, the longest life expectancy and the most extensive and expansive level of freedom, for all its people, since its foundation as an independent country. Certainly, the persistence of poverty, the draconian “war on drugs,” the garrison quality of the federal budget, and the undue influence of corporate power over political power demand aggressive actions of correction and reform. But they do not culminate in the creation of Dante’s Inferno, especially considering that the United States once enforced Jim Crow, subjugated women into secondary roles and excluded gays from mainstream society. The victories of the left have steadily made America more livable, humane and just. Conservative white boomers, unwilling to look at the totality of progressive change, see only the distance between the authority they currently exert and the authority they once enjoyed. Delusions of grandeur and illusions of the apocalypse cloud their vision.

Barack Obama (in the conservative white boomer view) is not a moderate president who, among his flaws and failures, can claim the accomplishments of presiding over 78 months of consecutive job growth and helping 20 million people acquire health insurance for the first time. He is a black militant usurper of all that is good – a Zulu warrior committed to performing unwanted abortions on every Christian woman. The willingness to address minorities with respectful language is not an enhancement of societal decency and civility; it is “political correctness” gone mad, the suffocation of free speech that will forever end education and destroy the exchange of ideas. The growth in Latino immigrants and other foreign-born citizens is not a continuation of the American tradition of hospitality and diversity; it is an invasion of exotic saboteurs who will demolish America’s economy and cultural norms.

This paranoia is all so silly that it quickly becomes boring, but the more thoughtful citizen cannot ignore it, because it has conquered significant territory in political discourse. Donald Trump, the new god of the white conservative boomer, has based his entire campaign on a forecast of Armageddon. “America is going to hell,” he claims, comparing the United States to the “Third World.” In his acceptance speech at the Republican National Convention, he likened the entire country to a “divided crime scene.” Typically, rants such as these are only heard from a megaphone held by a maniac on a street corner. Now it is the heart of the Republican pitch to voters across the country, along with allegations that the election is “rigged,” fears that ISIS will “take over this country,” and warnings that soon America will have a “one-party government.”

One of Trump’s favorite conspiracy theories is that the entire media has collaborated to make a fool out of him, as if he weren’t already succeeding beyond anyone’s wildest dreams in that capacity. Much of the mainstream media, however, has aided and abetted his campaign by repeating the whine of the white boomer as if it were legitimate.

The most compelling evidence that the United States is a “hellhole,” according to the mainstream media, is that only one-third of voters, according to various polls, believe that the country is “on the right track.” Demographic specificity exposes the real anxiety underneath the political pessimism.

The same polls that show whites are cynical about politics, depressed about the economy and worried for the future, also show that an overwhelming majority of black and Latino citizens are hopeful about their own lives and the trajectory of the United States. The title that the University of Chicago gave its report on the emotional divide of the country offers a definitive summary: “The Public Mood: White Malaise but Optimism Among Blacks, Hispanics.”

Meanwhile, the Wall Street Journal reports that the most optimistic group of Americans, regardless of race, comprises those under the age of 35. The hope of the dreaded millennials, whom the boomers love to target with endless sanctimony, is actually helping to “power the economy,” according to the story.

When commentators repeat the cliché that Americans are “angry” and “want change” – some important policy debates aside – what they are really doing is presenting the despair of white male baby boomers as if it represented the entire country. The same enraged masses who supposedly want to flip over all the tables give President Obama a 58 percent approval rating, yet Americans are subjected to exhausting discussion of “working-class anger,” as if only white working-class people mattered, and “manufacturing jobs,” as if anyone under age 40 dreams of employment in a textile mill.

The white conservative boomer frame of the political dialogue has functioned as a strong advantage for Trump. But because he cannot escape the limitations of his generational biases, he consistently commits political suicide – blowing every chance for capitalization.

When an "Access Hollywood" tape emerged proving everyone’s worst assumptions about Donald Trump’s sexism and misogyny, he barely bothered to apologize. Instead of admitting shame, he dismissed his celebration of sexual assault as “locker-room talk.” Giuliani, Gingrich, Christie and the usual sycophants of right-wing punditry read from the same script. The cliché is mindless in its implication that the degradation of women is acceptable if the guys doing it threw a ball around for a few hours, but it also reveals the mindset of the conservative white boomers who have not grown with the years. Likewise, the widespread perception of perpetual crybaby Trump as an “alpha male” exposes the weird obsolescence of the conservative boomer mindset.

Trump attempted to deflect accusations of sexual assault by mocking the accusers’ looks, just as Gingrich defended Trump’s insults against a former beauty queen by saying, “You aren’t supposed to gain 50 pounds after winning a beauty contest.” These men actually believe their retrograde objectification of women is funny or clever, because mentally they still live in an era when many men did find such things amusing, and women were unable to retaliate. Now, one woman – Hillary Clinton – is well positioned to execute retaliation of historical proportions.

Nostalgia for the lost era of white male boomer control created the Trump candidacy. Now it's killing it.