Mad hops: The rise of farm-to-bottle brewing is a great thing for beer enthusiasts and the environment

Forward-thinking craft beer makers are adapting the farm-to-table ethos to brewing, and the results are delicious 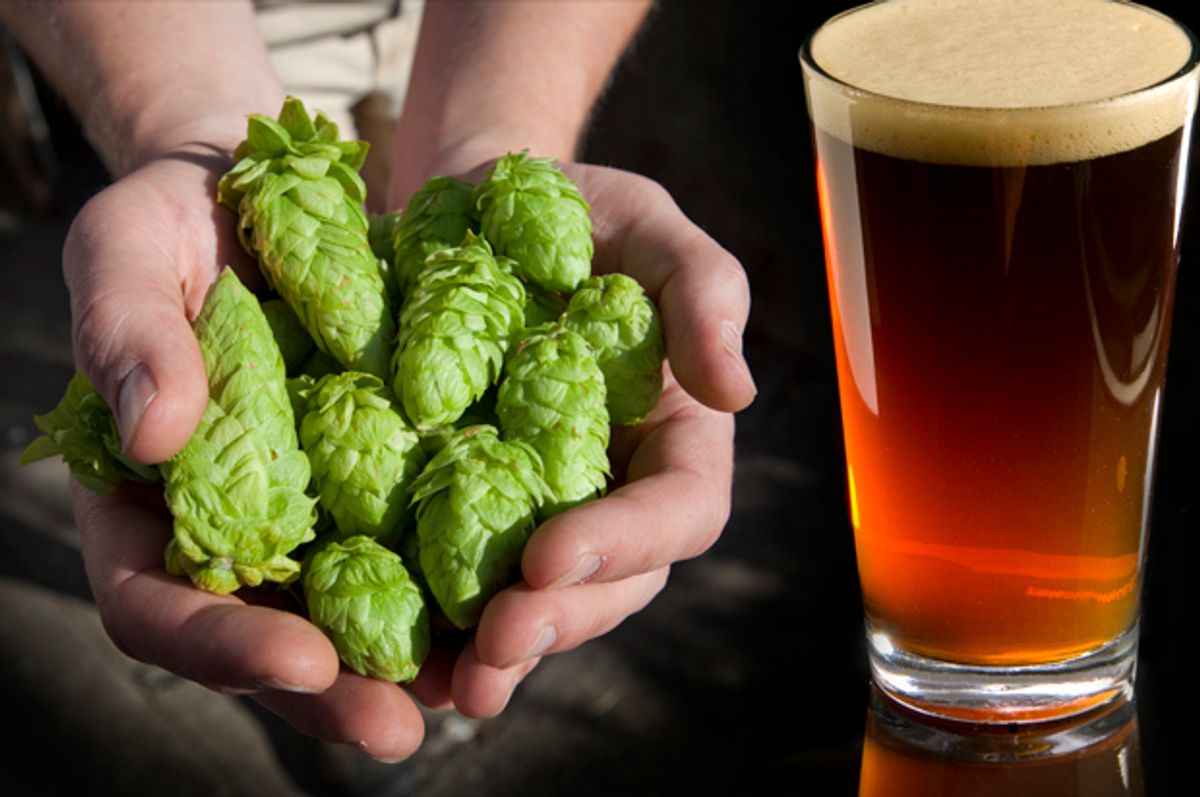 Some would say it's pretty crazy that the founders of Jester King — only six years old and already one of the most respected and revered breweries in the world — now plan to build a working farm on 58 acres of land a mere 18 miles from downtown Austin, Texas. But perhaps what's truly crazy is that they're not the only ones with such a vision. Brewers across the country have begun integrating beer production into larger, self-sufficient ecosystems on working farms, and by doing so, are taking greater control of the brewing process from start to finish. This wave of farm-to-bottle brewing isn't just great for the environment — it's great for beer connoisseurs, too.

Jester King co-founders and siblings Jeff Stuffings and Michael Steffing (the latter uses the historical spelling of his family's name) had been brewing on four acres of leased farmland for nearly five years when their rancher landlord made them an offer they couldn't refuse. They purchased 58 of his 200 acres and began thinking about beer production in a whole new light. "That gave us the dirt we needed to start breathing more life into how we define a farmhouse ale," Stuffings explains. "Which, for me, is a beer that's tied to a place and time and a people — it has a lot of unique attributes based on those factors."

While the brothers had always planned on using local materials such as raw well water and native microflora, the opportunity to grow ingredients themselves was only made possible by their acquisition. "We bought the land around us because we were afraid it would become a subdivision; we thought it would really kill the charm of the brewery," Stuffings confesses. But once the property was under their control, they quickly began taking full advantage of what it had to offer, with a one-acre peach orchard and a quarter-acre vegetable patch (their "brewer's garden," as they call it, which includes herbs and spices). Eventually, they hope to harvest additional fruits such as peaches, plums and blackberries, and raise livestock to support a farm-to-table restaurant. More immediately, they plan to grow hops in the spring of 2017, and will plant grains as soon as this winter.

With no professional farmers on staff, Jester King must rely on advice from friends and farming consultants — but some entrepreneurs are establishing farm breweries with experienced agronomists on hand to integrate agriculture from the start. Barry Labendz, for example, co-founded Kent Falls Brewing Co. on a retired 250-year-old dairy farm in Kent, Connecticut, with this concept in mind. "There was always this idea of using a farm to close loops: using the brewery to help the farm and the farm to help the brewery," explains Labendz. "It was always part of the equation."

On the same property as the brewing facility, Labendz and five partners built a brand-new infrastructure for Camps Road Farm, which now includes a hop yard, two greenhouses, an apple orchard and mobile chicken coops. The farm also provides a home for an increasing number of pasture-fed pigs, which are slaughtered and sold — like its chickens — to a CSA and in their farm store during brewery retail hours.

Simultaneously, the founders of Kent Falls built a distillery in Port Chester, New York, called Neversink Spirits (distillery laws are far more lax in New York than in Connecticut). Not only does Neversink benefit from a more direct sourcing of apples for brandy, but Camps Road benefits, too. "We don't need a massive apple storage facility: we can pick the apples and take them down there, and [Neversink] can crush, juice, ferment and distill right on the mash," says Labendz. The farm can also use spent apple and bourbon mash as compost, and the brewery can age beer in Neversink's used bourbon barrels. All three businesses will ideally help compound overall revenue.

A farm brewery is more than simply pragmatic, though: Whereas a typical mass-produced saison or "farmhouse ale" containing commercially manufactured yeast, hops and malt can be produced identically anywhere in the world, authentic farmhouse beer is unique in that indigenous ingredients create an inimitable profile that reflects the true "terroir" of the brewery — just like wine from a specific vineyard. Both Kent Falls and Jester King strive to use local ingredients, and even spontaneously ferment some of their beer during colder months. Using a coolship — a broad, open-top vessel — they permit wild "bugs" (yeast and bacteria) in the air to settle on the wort to eat and convert its sugar into alcohol and CO2. Like Stuffings, Labendz claims that this natural process gives the beers "a sense of place" when consumed.

These brewers are mimicking an older, more natural style of brewing based on seasonable availability. "People want their strawberries or blueberries year round, and the grocery stores are pressured to [provide] that," Stuffings analogizes, "but that's not the way it's supposed to work." Instead, he implores consumers to consider what's being naturally provided at each time of year. "Let's try to make something that reflects the ever changing landscape. I think it's more authentic," he says.

With that said, Stuffings is the first to admit he's no environmental purist: about 25 percent of Jester King's beer is distributed or delivered to festivals throughout the world, which requires burning plenty of fossil fuels. But Jester King is far more environmentally conscious than most breweries -- and certainly more than the vast majority of businesses. For example, the brewery buys malt from Leander, Texas, a mere 40 miles away. And it only uses two barrels of water to produce one barrel of beer, while many other breweries may go through two or three times that amount. "Engaging mixed culture fermentation, we don't have to do a 45-minute CIP (clean in place) loop on our tank," Stuffings explains. "We just basically get our equipment visibly clean, and that's good enough for us. We're embracing ambient microbes."

As Barry Labendz acknowledges, no brewery is without any carbon footprint. "There's a difference between helping the environment, and doing something in an environmentally conscious way," he clarifies. "As efficient as breweries want to be, I don't know that any brewery is really helping the environment. It's a very energy intensive process." Fortunately, farm breweries can save more energy than typical commercial outfits by harnessing the power of the sun. "We got a grant from the USDA to put solar panels on the brewery, and I can log into a website and see how much energy we've saved," says Labendz. "Energy is extremely expensive out here, so to be able to use solar means for what we're doing is a huge savings that might be tougher in the city."

And, while all breweries must deal with cumbersome amounts of spent grain (with some required to get especially creative), a farm brewery can compost its own used malt and utilize it on site, or sell it to other farms. As Labendz points out, spent grain is better off as compost than as feed for cattle, which are ruminants meant to eat grass, not barley.

Neither Stuffings nor Labendz is under any illusion that their farms will ever be fully self-sufficient, though. Both are entirely comfortable with working with other, more specialized farmers for supplemental and adjunct ingredients. "It's extremely intensive and hard to grow 300 pounds of strawberries — on top of which, we don't have that area of expertise," Labendz concedes. "I'd rather work with [strawberry] farmers to be able to learn more about the fruit, which varieties we want, and when the peak harvest time is." Despite any romantic notions most people might have of closed-circuit estate farms, historically, most have always had a limited focus, and simply brewed beer for consumption in the fields when water was less potable.

Of course, while agriculture-supported brewing has the undeniable potential to revolutionize brewery and brewpub models as we know them, it does present a wide set of challenges. "Our brewing schedule is very driven by season and the time of year," laments Stuffings. "Not just in terms of the ingredients that we use, but the microflora that's available to us and the impact temperature has on fermentation." And even beyond the initial cost of installing infrastructure, planting crops and caring for livestock can be incredibly expensive. "The financial aspect is by far the biggest drawback," Stuffings says.

Despite the difficulties that come with starting a farm brewery, the movement is catching on around the country. Fonta Flora of Morganton, North Carolina, for example, secured eight acres of a 49-acre dairy farm earlier this year in order to plant its own beer ingredients. Scratch Brewing Company in Ava, Illinois, has already been farming a smaller parcel and foraging for a few years, integrating found goods such as chanterelle mushrooms, sassafras, and vanilla into their beers. And since founding their brewery in 2013, the owners of Plan Bee, set on a 25-acre farm in in Poughkeepsie, New York, have only used products grown or manufactured in New York – including their bottle labels and cleaning supplies.

Plan Bee is one of a growing number of farm breweries to benefit from recent updates to New York legislation. In 2012, Governor Andrew Cuomo passed the Farm Brewing Law, which permits farm breweries to serve beer by the glass to customers – something that was, surprisingly, previously only possible via an additional permit. To qualify, at least 20 percent of all beer ingredients must be grown in New York State until the end of 2018; from 2019 to 2023, this number bumps up to 60 percent, and to 90 percent beyond that. The law creates a much easier path for farm brewers, and generates revenue more quickly. Within two years of the law going into effect, 43 new breweries had opened in New York, with many more launching since.

Labendz admits, "There's an argument to have been made that we're idiots for opening a farm brewery in Connecticut when there's a really nice farm brewery law in New York State, five miles west. But we were tied to this property — we wanted to do it here." With all of the trouble that comes with opening a farm brewery in the first place, Labendz is walking proof that no one invests in one to make an easy buck. As he confirms, "If you only looked at farm breweries from balance sheets, you probably wouldn't open up a farm brewery." Fortunately, the true value of farm-to-bottle brewing goes beyond dollars and cents — it's much more apparent in the ground and in the glass.