They're not for everyone. But concerts in living rooms, watch factories and odd spaces are helping artists survive 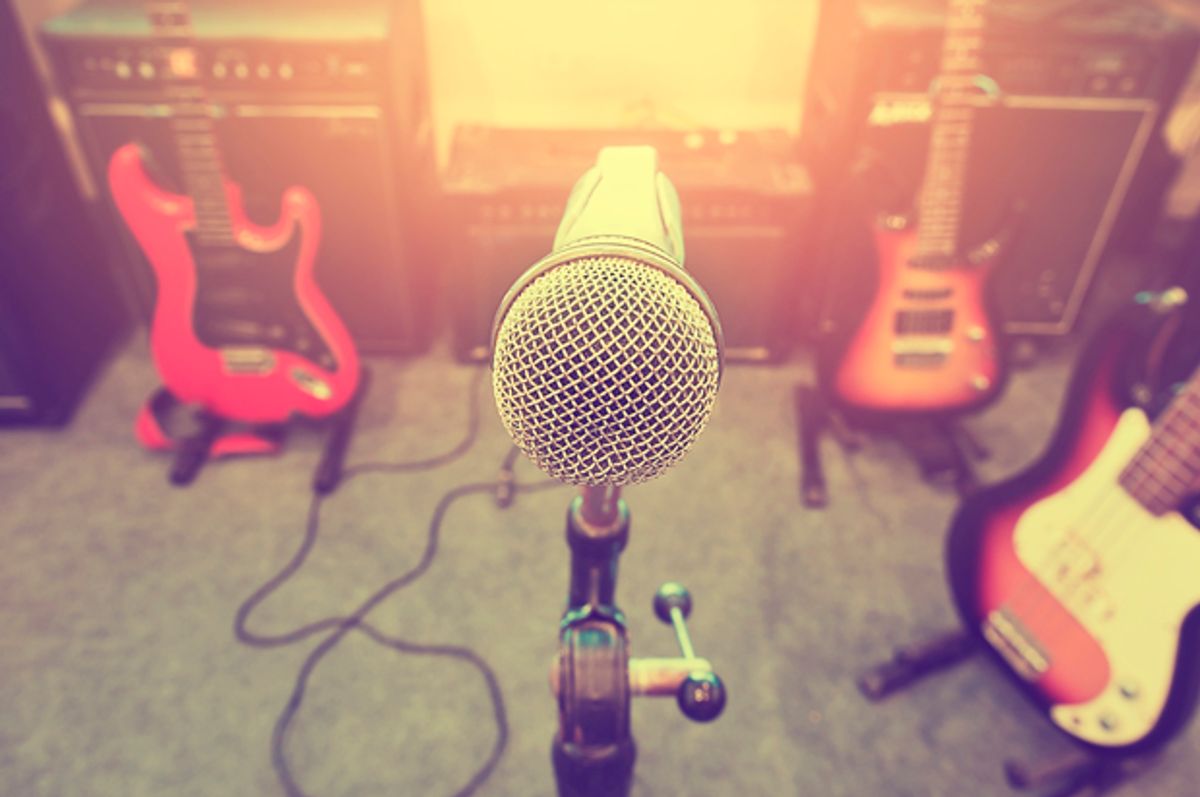 After a few years of touring through clubs, the musician Holly Muñoz had just about had it. She grew tired of not getting paid because she hadn’t drawn a large enough audience, tired of being moved through quickly in artist showcases like she and the other musicians were cattle. “Not all clubs are horrible,” she says, “but that circuit is tough. It’s not a well-curated experience for audiences: You’re not reprimanded if you don’t listen, and there can be a loud bar. You’re playing to a half-engaged audience, and you’re fighting the bar, fighting the audience.”

Muñoz began to do what an increasing number of musicians are trying: playing living-room shows, what she calls “pop-up concerts,” or what her sometime collaborator, Posies singer Ken Stringfellow, calls “off the grid” concerts, which can also take place in watch factories or Unitarian churches or recording studios. The majority of house concerts, though, take place in actual houses.

“One thing about going to a house show,” says Bob Andrews, who helped kick off the living-room revolution with his company Undertow Music, “is that the bathroom is going to be clean, and there won’t be some guy at the bar who won’t stop talking to you.” Andrews figures he’s produced about 3,500 shows since he started booking David Bazan — former leader of Pedro the Lion — in living rooms in 2009. When a musician plays a house, Andrews says, “He doesn’t have to track down the money from the coked-up bartender.”

Many of the musicians who perform house concerts are singer-songwriters or solo performers, and they’re sometimes artists who have continued making good music but whose radio play has faded and whose audiences have grayed. In an age in which musicians typically earn very little from recorded music, this sort of touring can be especially crucial to making a living.

But the range of people who play these shows regularly is wide: It goes from artists with small but intense followings to indie stalwarts Richard Buckner, Syd Straw and Archers of Loaf singer Eric Bachmann. Or even someone like Alejandro Escovedo, an acclaimed Austin-based musician with massive press support who sells out halls around the world. “People are warm and friendly — they want you there,” Escovedo says of house concerts. “You have more time to present the show in a storytelling way — you can really communicate.”

Stringfellow, who has also played with the touring versions of R.E.M. and Big Star, knows the Posies can play large clubs and decent-size theaters; they still play the 1,000-seat Neptune Theater in their hometown of Seattle. But they found themselves taken by surprise with a record release last spring. “This release date kind of snuck up on us,” he said from Spain, where the band was touring. “The lead time for booking club tours is six to nine months; there are so many bands on tour right now. By the time we came to book this tour, there was no way we could get a Friday or a Saturday night at a club we wanted to play.”

So he and his fellow Posies went on a tour of “Secret Shows,” with locations announced the day before the concerts. This fall they’re on another tour of unconventional spaces — some houses, with at least one church thrown in — on the East Coast, West Coast, and heartland. “It’s a good, adventurous feeling for this time in our lives,” Stringfellow says of hauling their own instruments and setting up their own shows. “I really don't think I’ve ever had more fun.”

Living-room concerts are hardly brand new, either in their recent digital-era form or in the history of culture: Musicians have been playing houses for as long as mankind has known private residences. Chamber music developed in the 18th and 19th centuries in the palaces of the nobility, but also in the front rooms of ordinary rich people. In 1920s Harlem, jazz musicians would host “rent parties” at which they would play in their own homes and pass a hat that allowed them to make their rent that month. Musicians have played private shows for friends and fellow musicians since time immemorial.

What’s new is the way digital technology — which has played a role in undercutting artists’ revenues and in hiking the cost of living in cities where many reside — has energized off-the-grid touring. Email lists and Facebook and ticketing apps make things smoother and more feasible than before. In chamber music, there is a service called Groupmuse that connects musicians with hosts and audiences: Wired recently called it an Uber for millennial-generation classical music fans.

The inauguration of the current wave of living-room concerts is sometimes dated to the 2009 tour Andrews, a longtime band manager who once worked for Uncle Tupelo and Wilco, put together for Bazan.

“It was partly out of desperation,” says Andrews, who runs his company out of Urbana-Champaign. “He was broke, I was broke. And he couldn’t tour [with record company support] because his record wasn’t out yet.” Andrews found a database of existing house shows, but most of the hosts had no idea who Bazan was, or could only book him on weekend nights — a hard way for a touring musician to launch a monthlong tour. “We had to scrap that because nobody knew or cared.”

But Andrews sent word out through Bazan’s own email list that he was looking for people to host shows. “By the end of three days,” he recalls, “we had something like 300 offers.” So Bazan went out on not one but two 30-day tours. He now does 150 or more shows each year, many of them in homes.

The fact that musicians need to earn more of their revenues from touring makes getting this right crucial for many non-superstar musicians. Charging $25 or $30 a head — around the median for house shows, and typically more than what the artist would ask for in a club — or the $100 ticket that the Posies offer (which includes dinner or a hangout with the band), the fees offset falling recording sales. Data from a 2012 survey by the Future of Music Coalition (FMC) found that of the rock musicians surveyed, 44 percent of their revenues came from live performances. While there is no comparable data from a decade or two earlier, the decline of record sales from their high around the turn of the century is something nearly every musician knows well. Many musicians, especially those with families, spend far more nights on the road than they want to, out of financial necessity.

“And the house concert ethic is that 100 percent of the ticket sales goes to the artists,” says Dan Navarro, a longtime songwriter and former member of Lowen and Navarro, who still tours incessantly.

“It’s the convergence of two different traditions,” says Kevin Erickson, national organizing director of the Washington, D.C.-based FMC, and who once booked house concerts as a college student in Washington state. “The folk music tradition of the house concert and the punk tradition of using whatever spaces were available, with streamlined overhead.” (The latter came to be termed DIY, for Do It Yourself.)

Recent years, Erickson says, have seen old, informal networks be firmed up, with the help of digital technology and a few entrepreneurs with the right values to make it economically feasible for musicians.

“What makes the kind of thing Bob does so great it that he has a real background in music, and he’s very artist-centered,” he says. “The best kind of tech development emerges from real communities. There’s a potential for someone to look at the concert situation and say, ‘This is ripe for disruption, I’m gonna disrupt it and make a lot of money here.’ ”

Still, he regards living-room concerts and the like as a healthy development. “The live music economy, in the absence of state funding, is dependent on alcohol sales,” Erickson says. “And big cities like D.C. are gentrifying, getting more expensive,” which drives rents up for clubs, theaters and concert halls. As a result, venues have to either sell more alcohol or sell more tickets — neither of which is a perfect fit with quiet music or a relaxed concert setting.

Similarly, he says, “When you go to a major music festival, you’re bombarded with advertising: This is kind of the opposite of that. And there’s an intimacy you don’t get from festivals.”

Muñoz loves playing living-room shows, especially ones where she can perform with musicians she’s friendly with, and often, increasingly, with chefs who prepare meals to precede the concerts.

But it’s not for everybody. “You’re vulnerable as an artist, and exposed,” says Muñoz, who spends a lot of time in Minneapolis but says she lives on the road. “You can’t hide behind a management team. If you are socially awkward or entitled or think it’s not your job to engage with your audience, house touring is not for you.”

“It’s really labor intensive,” say Stringfellow. “I’m in the van, with someone else driving, tethering my phone to my laptop, hitting up [fans] one by one. You have to work your social media like crazy.” On other tours, “We rent a car and load it up, every day. You have to be willing to do that.”

For some musicians, unconventional spaces don’t make sense, in part because under-the-radar tours don't draw press or radio attention some artists rely on. “If you’re playing at a club to more than 500 people, you’re better off doing that,” Stringfellow says. “But we’re better off playing to 90 or 100 in a living room.” He and Muñoz made $15,000 each during a 39-date tour over five weeks.

“Sometimes people cross barriers,” says Escovedo, “where it becomes a little too personal. Sometimes people want you to spend the night,” even though he’s tired after a show and just wants to retreat. Still, with some people he knows, he’ll spend the night in a guest house, have a late, wine-soaked dinner after the show, or throw a ball with their kids the next day.

And with some exceptions, these concerts are best suited to musicians who perform in a folk-rock or singer-songwriter tradition, in part because home acoustics don’t typically flatter heavily amplified or percussion-driven music, and neighbors don’t always want to hear it. (The fact that much of the circuit depends on venues without a cabaret license — which makes them technically illegal — is another reason to keep them quiet.)

If you require a complex sound mix and your primary influence is the Stooges, My Bloody Valentine, or Public Enemy, living rooms may not be your best bet.

Because his upcoming record, “Burn Something Beautiful,” is an electric-guitar-driven experience, Escovedo says it will be hard to play house concerts. “For this one, we’ll do the clubs.”

And if you are well-known for heavy drinking, drugging, or Keith Moon-style hotel-room-trashing, you may find it hard to get booked in people’s homes. You also need — and this can be the hardest part — to have an established and dedicated fanbase.

Still, for certain musicians, this new bootstrapping world is exciting. “The music industry as we know it is basically dead,” says Muñoz. “We’re rebuilding, and it’s like the Wild West right now. The whole playing field has been leveled.”

Says Navarro, who still plays clubs like Northern Virginia’s Birchmere, “The business I grew up in is one where you hid backstage, creating a sense of mystery with the stage and lighting and distance. You created a fourth wall.”

But he enjoy the new world and looks forward to visiting people in Chicago or D.C. every year or so. “It really does create connections,” he says. “The demand for connection and storytelling is what it’s all about.”