The much-loathed oil company reported a tiny profit but is foundering. Try to contain your enthusiasm 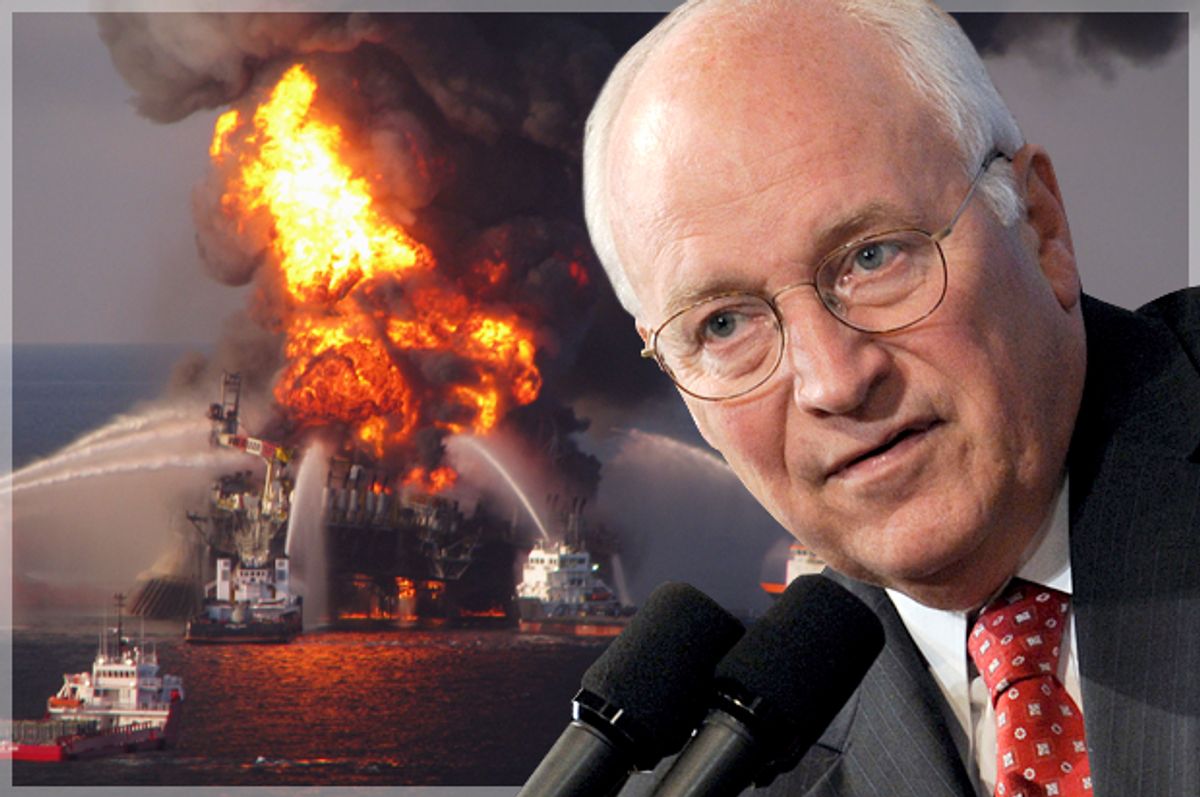 Halliburton — for many, the name invokes war profiteering and political favoritism and worse. But these days, Halliburton appears to be less a symbol of the cozy and often dubious revolving door between the federal government and defense contractors and more just a run-of-the mill energy company that’s fallen on tough times.

After more than a year of quarterly losses, the Houston-based global oil-services provider made news by eking out a slight profit of $6 million in the three months ending Sept. 30, according to its third-quarter report released last week, up from a loss of $53 million in the same period last year. But revenue fell by nearly a third, to $3.8 billion, its seventh consecutive quarterly drop. Quarterly sales have plunged nearly 60 percent since the last three months of 2014 when the company reported $905 million in profit on nearly $9 billion in revenue.

“I never thought I would be so satisfied by barely making a profit,” CEO David Lesar said in an Oct. 19 conference call with analysts. “This has been a historic down cycle for the industry and it’s had its fair share of challenges.”

Lesar has been with the company since 1995 and took over in 2000 as CEO after former U.S. Defense Secretary Dick Cheney abruptly resigned to become President George W. Bush’s running mate. The 2006 Robert Greenwald documentary “Iraq For Sale: The War Profiteers” estimates that Lesar earned $42 million in compensation during the company's salad days of the Iraq war.

Now things are different. The recent minimal third-quarter profit came from North American revenue, which grew 9 percent compared to the same period last year, to $1.7 billion. This was the first gain in nearly two years as the number of U.S. active oil rigs increased along with a rebound in oil prices from a 13-year low in February. But global revenue dropped 6 percent to $2.2 billion led by steep declines in business from Mexico, Argentina and especially OPEC member Venezuela, which is teetering on political collapse.

Like so many other energy companies, Halliburton has been pummeled by the global oil glut. Unlike its rivals, however, its bad reputation overshadows nearly everything it does. Here are some of the reasons why few are shedding tears for Halliburton’s current challenges.

Halliburton’s benefitted from its relationship with Dick Cheney

For most of its 97-year history, Halliburton has been a major go-to company for cementing onshore and offshore oil wells, and today that remains its core business. It would have remained just a big, relatively anonymous oil and gas player were it not for forging close and lucrative ties to U.S. government in the wake of the first Gulf War in the early 90s. It was after Halliburton’s work capping the hundreds of Kuwaiti wells Iraqi forces lit up in their 1991 retreat that it got cozy with Cheney.

In 1991, the Pentagon, under Cheney, awarded Halliburton subsidiary Brown & Root Services an $8.5 million contract to study how to incorporate private security forces into U.S. military operations. (Brown & Root Services would later become Kellogg Brown & Root, or KBR, which was spun off from Halliburton in 2007.) The deal to study military privatization marked a profound change in the company’s relationship with the federal government and Cheney himself, who left the Pentagon in 1993 and became Halliburton’s chairman and CEO in 1995. Later, as vice president, Cheney was accused by many of maintaining an inappropriately close relationship with Halliburton, and earned millions from vested stock options before and during his time as vice president. Though Cheney donated most of the money earned from vesting stock during his vice presidential term, conflict of interest questions surround both Cheney and Halliburton.

Halliburton’s KBR subsidiary went on to win billions of dollars of business building and running publicly known and secret military installations. KBR also won sweetheart deals in military support roles, like providing soldiers with toilets and Internet access. Pentagon officials, and Cheney himself, believed firmly that privatizing operations traditionally performed by the military was faster and cheaper. The debate over outsourcing combat-support operations continues to this day, but there has never been any conclusive evidence private contractors are more efficient and cheaper.

The most controversial aspect of Halliburton’s relationship with the federal government comes from the billions it won in contracts for the Iraq war under no-bid and cost-plus deals. In 2003 Halliburton was chosen without any competitive offers from other companies to rebuild Iraq’s oil infrastructure despite allegations it overcharged for delivering fuel to U.S. forces. The company (as well as others) also won cost-plus contracts, in which it was guaranteed a profit regardless of cost overruns.

In 2009, Halliburton paid a record $559 million penalty to the U.S. government to settle charges that KBR paid Nigerian officials for liquefied natural gas facility construction contracts over a 10-year period. Both companies pled guilty to criminal and civil counts of violating the U.S. Foreign Corrupt Practices Act. The corruption took place over a decade in Africa’s second largest and oil-rich economy. Halliburton has also been investigated by the federal government for possible corrupt practices in Iraq and Angola.

In 2007, Halliburton sold its stake in KBR, which had grown to become the largest contractor in Iraq. The move divorced Halliburton from KBR’s ongoing U.S. government contracting work. But just as Halliburton seemed to be putting distance between itself and its legacy with KBR and Cheney, the Deepwater Horizon explosion and oil spill put the company back on the front pages of national newspapers. The largest environmental disaster in U.S. history has been largely pegged on British oil giant BP, but Swiss offshore drilling contractor Transocean and Halliburton, which oversaw underwater cementing operations, were implicated as bearing responsibility for the blowout. In June, the two companies reached settlements against individual claimants worth $1.24 billion in punitive damages for their roles in the disaster.

Halliburton’s legacy as a war contractor may be largely behind it, but its continued presence as one of the world’s largest oil-services firms will keep its operations and its name in the public’s eye.