“Darrell Issa was Trump before Trump,” Obama said after the Californian campaigned on his work with White House 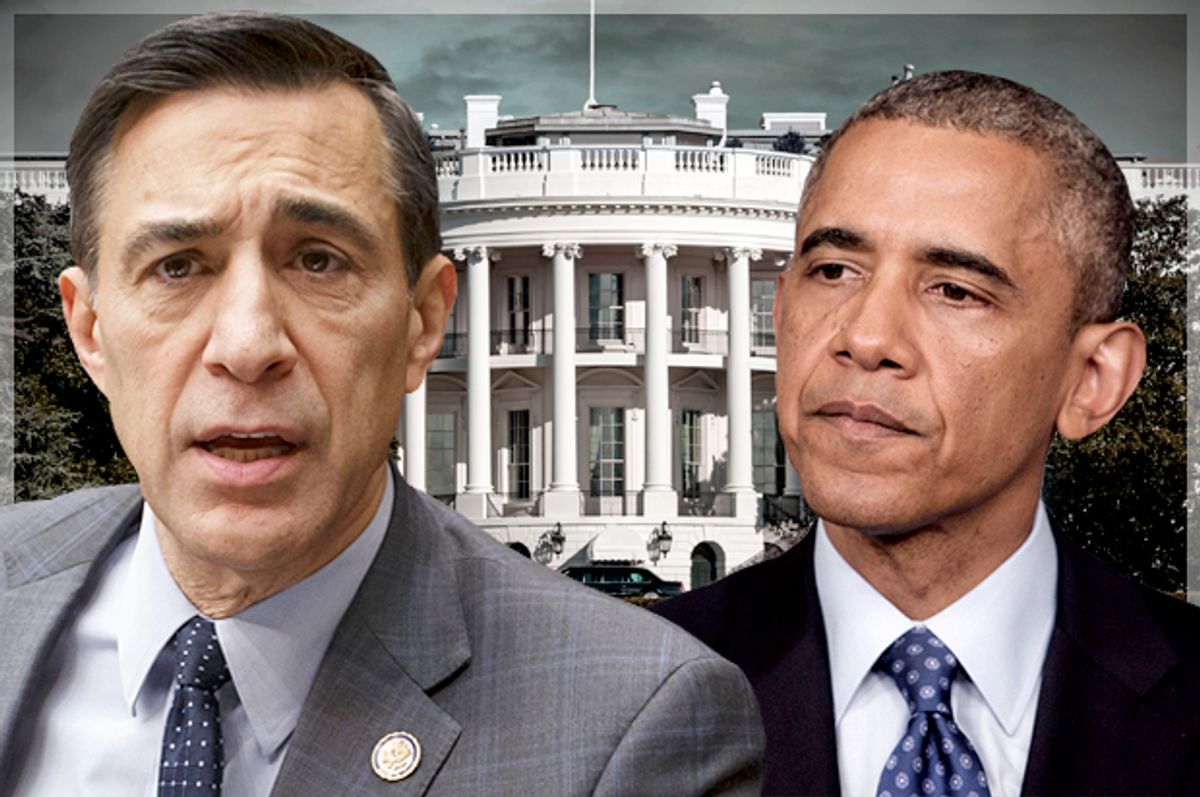 It is becoming startlingly clear that unlike in 2014, President Barack Obama is proving to be a great asset for Democrats in campaigning this year — so much so that even some Republicans are embracing the president in an effort to save their seats in the event of anti-Donald Trump wave election.

Democrats announced recently that Obama will appear in campaign ads for at least seven Senate candidates as his favorability hovers in the mid-50s in many public opinion polls.

At the same time even one of Obama’s biggest GOP foes in Congress has decided he should hug the president close as his bid for re-election surprisingly tightens.

California Rep. Darrell Issa recently released a campaign mailer touting his work on the Survivors' Bill of Rights, which was signed into law by Obama. The mailer featured Obama with a small image of Issa, saying he was “very pleased” the president signed legislation that established a bill of rights for survivors of sexual assault. On Sunday while campaigning for Issa’s Democratic challenger, retired Marine Col. Doug Applegate, the president slammed “shameless” Republicans who after years of obstructing his agenda suddenly want voters to believe that they’ve happily cooperated with the White House.

"That is is the definition of chutzpah,” Obama said of Issa’s mailer at a fundraiser in California.

"Here’s a guy who called my administration perhaps the most corrupt in history — despite the fact that actually we have not had a major scandal in my administration," Obama said, according to a transcript of his remarks provided by the White House.

“And this is now a guy who, because poll numbers are bad, has sent out brochures with my picture on them touting his cooperation on issues with me,” Obama said to laughter from the crowd in La Jolla.

Issa “is not somebody who’s serious about working on problems,” the president argued. “Let me just point out that as far as I can tell, Issa’s primary contribution to the United States Congress has been to obstruct and to waste taxpayer dollars on trumped-up investigations that have led nowhere.”

Pointing out that Issa has long been a critic of the administration on everything from including birth control in health insurance coverage to the Benghazi attack in 2012, the president called the California Republican "Trump before Trump."

Obama added, “And now he’s sending out brochures touting his cooperation with me. Now, that is shameless.”

In his response to Obama’s diss, Issa went back to his over-the-top rhetoric and faulted Obama for the death of Americans in a statement Monday. "I'm disappointed but not surprised that the president, in a political speech, continues to deny accountability for the serious scandals that happened under his watch where Americans died overseas and veterans have died here at home," Issa said.

But Obama’s message on Sunday wasn’t just limited to Issa. "It is absolutely vital we do everything we can to maximize turnout, maximize enthusiasm, reject Trump but also reject the climate that results in Donald Trump getting the nomination," he told the attendees at the fundraiser costing $10,000 a plate or more.

"Donald Trump didn't build that," he said. "He just slapped his name on it and took credit for it."

Much of the outlandish things Trump says on the campaign trail, Obama argued, could just as easily be found in many Republican floor speeches in Washington.

“The Freedom Caucus in the House of Representatives are repeatedly promoting crazy conspiracy theories and demonizing opponents,” the president said.

Issa, Obama said, is like so many Congressional Republicans who spend the year demonizing him and then show up with family members for pictures at the White House Christmas party. “Some of them say, ‘I’m praying for you,’” the president revealed. “And I don’t question the sincerity that they are praying for me: ‘Please change this man from the socialist Muslim that he is.”

Yet another Republican candidate touted his ties to the White House on Monday: Ohio Republican Senator Rob Portman released three radio ads with African-American pastors that highlight the fact that “Portman authored a bipartisan law signed by President Obama to break the grip of heroin addiction,” according to Roll Call.