Yes, feminists can laugh at themselves: "But don't be lazy with your rape joke"

Salon talks to the authors of "How to Win at Feminism" about satire, trolls and commercialized female empowerment 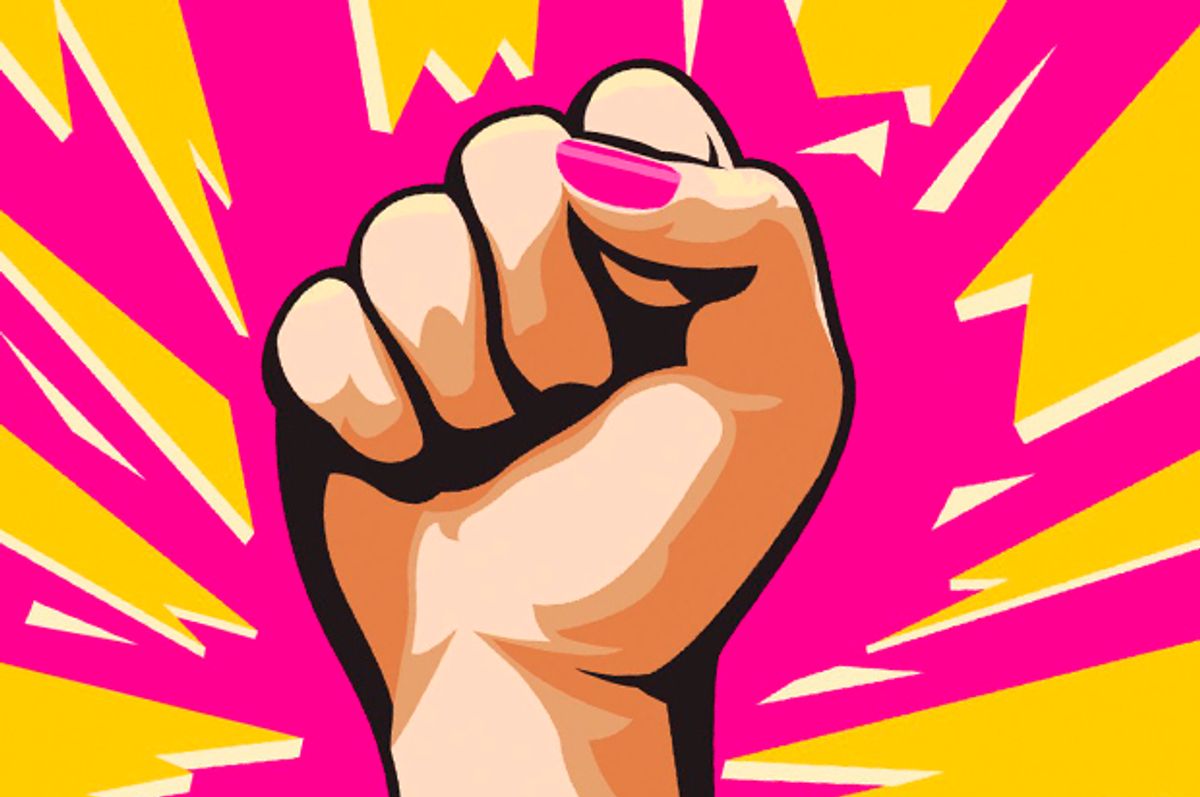 Cover detail of "How to Win at Feminism" (HarperOne)
--

The satirical women’s magazine Reductress emerged online in 2013, and since then has been at the forefront of smart feminist comedy. Sharp, hilarious and easily sharable, Reductress garnered a huge audience of millennial women eager to pore through articles with titles like “Woman Announces Completion of her PhD Thesis with “So I Wrote a Thing…” and “How To Make Sure He Isn’t Just Into You for Your Nuanced Takes on Current Events”

Salon had the opportunity to speak with Reductress founders Beth Newell and Sarah Pappalardo on their forthcoming book, “How to Win at Feminism: The Definitive Guide to Having It All — And Then Some!,” and the translation of their distinctive brand of online humor to a more traditional book format, as well as the serious, and seriously funny, matter of inspiring woman to embrace women’s rights, while pushing back against commodification.

I thought I'd start by asking about where your idea to write a full-length book came from. Is this something you've always thought about doing? Or an idea that came up after you'd been writing for the site for a while?

Beth Newell: We'd thought about doing a book for a while but the idea for a book about feminism specifically didn't come until a year or two in.

‪Sarah Pappalardo: There was a point when mainstream women's media "discovered" feminism and were interested in the way they were bringing it into the conversation sometimes in a good way, sometimes not as good.

‪Newell: And we’ve always kind of been obsessed with media that's meant to "empower" women by selling them things. And that's kind of where pop culture went with feminism.

It's interesting because that mainstreaming of feminism is seen by some as a real mark of progress, but it sounds like you see it as a little more complicated than that.

‪Pappalardo: It definitely is progress! But with anything progressive that hits the mainstream, there is a lot that can get watered down along the way.

Newell: We are happy feminism is going mainstream. We just don't always love the way it's done.

‪‪Pappalardo: And commodified. When it's packaged in order to sell things or in such a reductive way that only serves women who are relatively privileged, it waters down the message and the aims of even the most fundamental idea of feminism. This is why we addressed "white feminism" in the book, the idea that there is a certain brand of feminism that only serves white women or women with a degree of economic privilege. What advertisers might call [cynically] a "lucrative target demographic."

It sounds like you've noticed a shift in how feminism has been commodified since the start of Reductress. Has this been a gradual trend? Or do you think there was a specific trigger that led to this idea that feminism, and especially white feminism, could be a way to sell things?

‪Newell: It's hard to point to one thing. Maybe as we recycle everything from the '90s, girl power got dusted off and rebranded for the youth. Social media has done a lot for letting different groups express themselves in a good way, so conversations like #yesallwomen have had a chance to catch on.

‪Pappalardo: And a few celebrities sort of warmed up to the term more in the past couple of years: We’re looking at you,Tay Tay.

One of the things I love about Reductress is the way it satirizes sexism, as well as elements of the mainstream feminist movement.

‪Pappalardo: Yes! We have a lot of fun with that on the site.

‪Do you feel like it's ever risky to point out places where feminism might not be successful or where the commodification is sending mixed messages?

‪Newell: If it's done in the right way, I think most people get it. The hard thing with anything that's meant for women is that any movement starts setting up new standards for us to live up to, in addition to all the other existing reasons we are made to feel inadequate. So when we make jokes about how impossible that is, I think people relate.

I was thinking about Portlandia's feminist bookstore skits in preparation for our conversation today. They always cracked me up, but it seems as though there were some real tensions about who was actually the butt of the jokes. What are your thoughts on this idea about "punching up" rather than "punching down" ‪and how can comedians satirize effectively?

Newell: As feminists, we like to laugh at ourselves sometimes. It's not that certain topics should be off-limits; it's that when you talk about certain things, you better have a decent point to make and you better make that point clear.

Pappalardo: Yeah, and it helps to have been part of the thing you are tackling. You have to love the thing in order to poke fun at it.

Pappalardo: You can feel when there's a lot of distance between the subject and their target. It feels hurtful. With some comedy, you have to think of it like an homage to the thing.

‪Newell: And you have to know your audience.

‪Were there any sections of "How to Win at Feminism" where you felt you had to do outside research or go outside your wheelhouse in order to effectively joke about it?

Pappalardo: We didn't have to do a ton of research, mostly just a bit of fact-checking on a few things that we haven't read since college. These were topics we were very familiar with, right down to the breast pumps.

‪You brought up '90s "girl power" at the start of our conversation. Do you feel like feminism has changed from that era? Or that a lot of today's discussion feels like a throwback? I know for a lot of my students, they feel that feminism literally began with Beyoncé.

Pappalardo: That iconic moment, where she had the "FEMINIST" sign behind her, was a huge turning point for sure.

‪Newell: I think it has changed a lot since the '90s. The women of that era were trying to get their foot in the door in a lot of fields, and now we're commenting on what it's like to be one of two women in the room.‪ We've made strides, but now there are new challenges to deal with. And not everyone's made strides obviously.

‪Tell me a little about what it means to collaborate on a project like this. Do the three of you [including Anna Drezen] each bring different things to the table? Do you have to negotiate a lot?

‪Pappalardo: The way we wrote the book was kind of like a larger-scale version of how we put together content for the site. What we typically did was agree on the headline, the chapter title first, someone would then write that up, then we'd each punch it up from there.

Newell: And I bring the mom vibes hard.

Were there differences in writing for the site and the book?

Newell: Yeah, knowing this will live on in print for a while and hopefully stay relevant influenced what we'd write about and how we'd write it.

Could you tell me a little more about that? I always think of things online as "living forever." Is that not true? Does this feel like it will live on in a more permanent way?

Pappalardo: We hope so. We tried to tackle as many major issues of feminism happening right now that hopefully, when someone pulls it out of a time capsule in 2050, will make women say, "THIS is the shit they had to deal with in 2016?"

Newell: Well part of the challenge is that we wrote this a year ago, so we couldn't be like "Taylor Swift is dating [blank]."

Pappalardo: And we wanted to make sure we tackled all angles of a topic, like women at work, in a way that we probably wouldn't do on the site. Our pieces on the site have to stand alone and be strong ideas on their own, but we were thinking about how these chapters all tied together in a narrative.

‪As a side note, I love the art!

‪Newell: Thanks. The illustrations are mostly Steve Dressler and Carly Monardo.

‪Pappalardo: A bit from Tom Pappalardo, too.

Who do you see as your primary audience? Millennial women? Reductress followers?

‪Pappalardo: Perhaps they are one in the same! Definitely millennial women and a few woke men. Maybe a Gen X mom or two.

‪Newell: It would be nice to find out younger millennials picked up a copy and got an intro to feminism from this — the same way I might've gotten into politics through Jon Stewart or The Onion.

Pappalardo: That's what we forgot! Should have put a giant "like" button on every page.

Who are your biggest feminist inspirations?

‪Newell: Anyone who stays composed after they’ve been trolled on the internet.

‪Have either of you personally faced harassment [since] starting Reductress?

Pappalardo: Not a ton . . . but Reductress as an entity has seen its fair share of Twitter trolls.

‪Newell: Mostly around the rape culture home page takeover we did.

Pappalardo: There are some trolls that seem to treat Reductress as some kind of insolent woman they want to talk down to. And it's, like, you know, this is a faceless digital brand, right guys? She's not going to cry over this. She is an LLC.

‪I've noticed that from articles I've written, too. Why do you think there is so much vitriol?

‪Pappalardo: I think there are some men out there that need a female target for their rage because they can't do it in real life without facing real repercussions.

Pappalardo: Like, you know how The Onion will do "Local Man does X?" If we do "Woman Does Y," to some men, they seem to take it as "SEE, ALL WOMEN SUCK! THIS WOMAN IS THE WORST" as if we wrote a headline to specifically shit on women. Where if The Onion did that about the man, they'd just laugh and take it as a joke about "everyone!" And it's, like, oh, why is it when a woman is the subject, this fictional person suddenly represents all of womankind?

‪You must be very proud of the work you do at Reductress, which has really come alive during a time when we have a renaissance of feminist comedy.

‪Pappalardo: We are! Sometimes we have our heads down in the work too much to think, but we are proud. We always say whatever Oprah has done in women's media, we want to do in women's media satire.

Newell: Yeah, I think that again is the beauty of social media. Anything can find its audience. So we no longer need white male approval to laugh about being women.

Pappalardo: Although some white men do approve of us.

‪Are there any last points that you wanted to make about your book? Your process? Feminism in general?

‪Newell: We actually love capitalism and I take back everything I said earlier. Buy our book!

Pappalardo: All profits will go toward women giving themselves a big hug.