Am I raising a Donald Trump? My kid wants to Make Playtime Great Again

“I’m really rich,” my preschooler boasted after collecting $6 in Monopoly Jr. cash from my wife 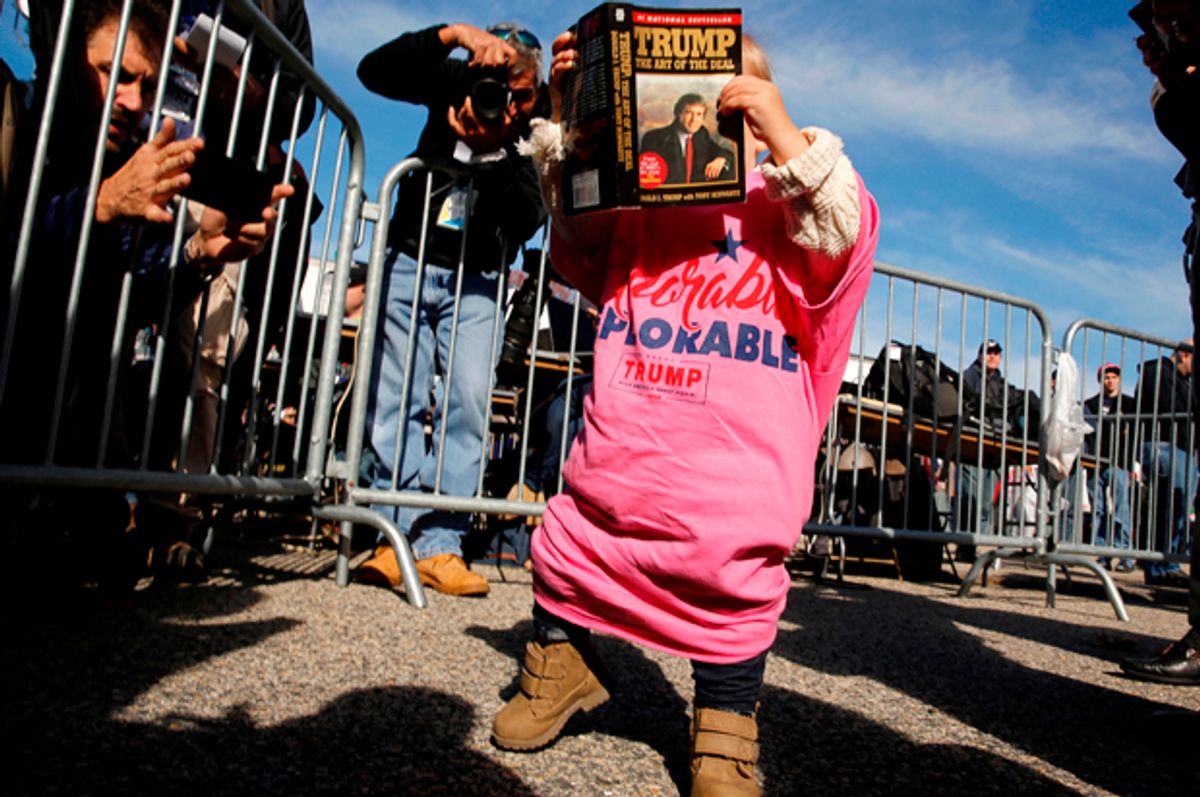 Maybe it’s the competitive side of board games.

Maybe it’s the cutthroat thrill of plastic real estate. But lately whenever we break out Monopoly Jr., my curly-haired 5-year-old son has started acting an awful lot like an orange-haired presidential candidate.

Our kid was on a one-man mission to Make Monopoly Great Again and I needed to know why.

“I’m really rich,” he said, after collecting $6 from my wife when she landed on the Cute Aliens property. (We have the "Toy Story" edition of the game.) Our boy proceeded to take a series of financial hits on the yellow and green properties but was quick to change the subject regarding those failures.

When I handed him two bucks, he doubled down like a true graduate of Trump University. “I’m really, really rich!”

Our son has never watched Donald Trump speak on television. He’s never tuned in to Samantha Bee or Trevor Noah as they poke fun at the Republican nominee. He’s never even taken a sip of Trump Ice. (Which is a shame. I’ve heard it’s the best water.) Yet, our son seems to have a supernatural ability to channel the Donald during family game time.

“This is the best way to roll,” he said dropping the dice with a thud.

He informed the nasty little woman who gave birth to him that she was doing it wrong when she suggested using a couple of three dollar bills to make six bucks. “I’m doing everything right!” he informed us, proudly making change with a fistful of ones.

As the game neared the end, our son grew increasingly aggressive. He did everything short of making a secret midnight pact with Vladimir Putin to ensure victory.

In Monopoly Jr., the game stops when one player runs out of cash. The remaining players tally up their bank accounts and whoever has the highest amount wins. It's a brutal lesson in capitalism that the real Mr. Trump would probably love. Sadly, Monopoly Jr. doesn’t let you estimate how many billions you think your “brand” is worth.

Admittedly, morphing into a Trumpian alpha male has always been well within our son’s wheelhouse: Monopoly just seems to amplify it several decibels higher. I mean, he has enough confidence to run a misguided campaign for president already. Our son is loud and constantly spewing bonkers declarative statements: “I can fly. I mean it. I really can!” Plus, he has tiny hands.

“Daddy, you’re making me want to blow up your properties,” he said after landing on another of my hotels and shelling out the rent.

Or maybe you’d just rather build a wall, I think.

My wife was down to her last dollar — near bankruptcy. Since I had acquired an equally large sum of money, it was either the White House or the poorhouse for toddler Trump. That made me nervous. If he was going to lose, he would likely take everyone down with him. We had seen this before. Games that didn’t end in a victory were subject to being flipped upside down and flung across the room.

“I am not going to lose this game,” he said. It was less of a threat and more a statement of purpose. He was sending a clear message that if he doesn’t win, it’s likely because of some sort of conspiracy. Perhaps these Chance cards are rigged?

That was about the time that I became the first man in history to suffer a Monopoly Jr.-induced existential crisis. As we continued to move around the board, the discussion shifted to the nightmare our son had last night.

He said it was about a haunted house. He crawled into bed with my wife and me around two in the morning, holding a stuffed elephant and his blankie. Like any normal human, he needed warmth, comfort and love.

How was that the same preschooler who just threatened to blow my hotels off the map?

Our kid is a bubbly little guy who enjoys bouncing on a trampoline and smashing Hot Wheels together. If he has some Trump in him, is it possible Trump has some human in him? Was the "Apprentice" mastermind once scared at night, tiptoeing through the dark to his parent’s bedroom seeking human comfort? Did he play with toy cars? Did Trump once have real hair?

Don’t get me wrong. I wouldn’t vote for the guy even if there were a lifetime supply of Trump Steaks attached to the deal. But I’m starting to realize that if the spirit of competition brings out the worst in my lovable little son, maybe he isn’t alone?

If there is some Donald in my son, is there (gulp) some nightmarish dark side in everyone?

Before I finish shivering long enough to make that judgment, Lil’ Trump lifts a page straight out of "The Art of the Deal": Misdirection 101. In a move not unlike discouraging people from worrying about your own past indiscretions because there are unread emails! our son distracts everyone from his potential Monopoly meltdown by walking away from the game and lifting a can of green wall paint that had been sitting in the corner.

He lugged up the can and waddled toward the board. We showered him with praise. "Wow, you are strong!" My wife and I had already forgotten about his questionable efforts to win the game at all costs.