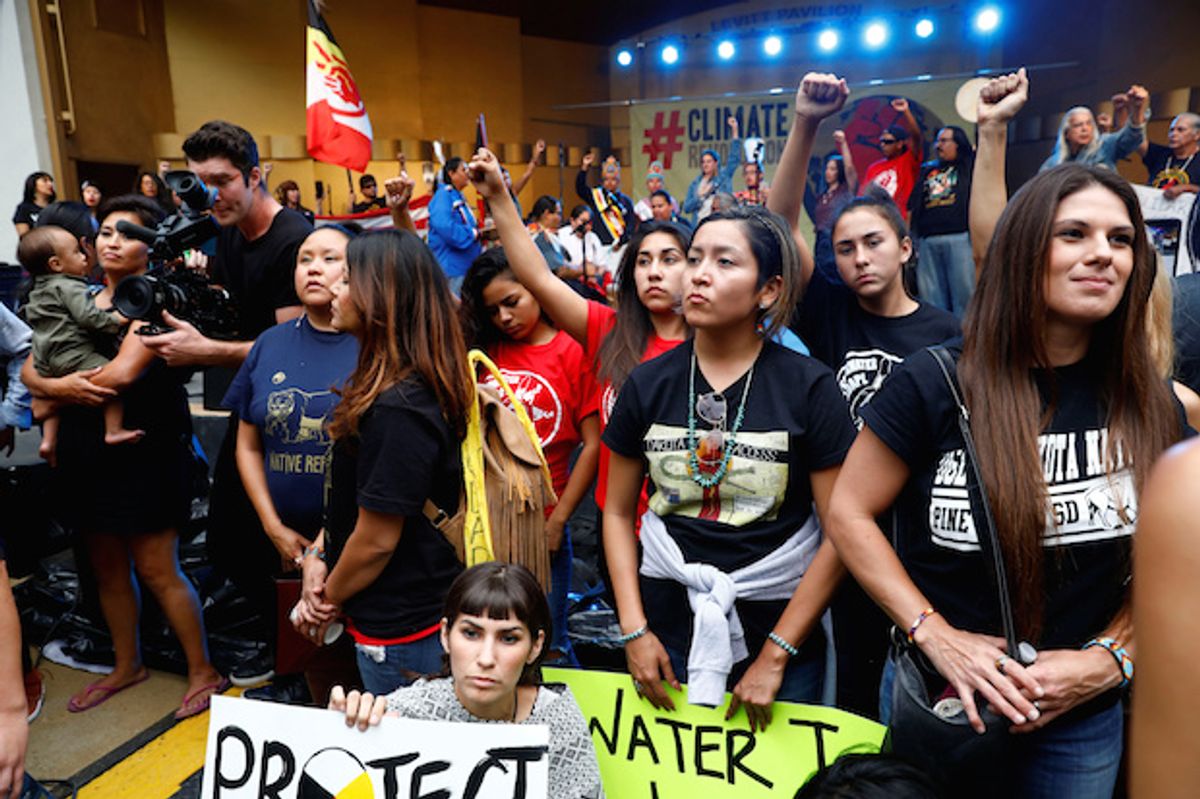 Activists at a climate change rally in solidarity with protests of against the Dakota Access pipeline, in Los Angeles, California on October 23, 2016 (Reuters/Patrick T. Fallon)
--

Protests against the $3.8 billion Dakota Access pipeline continue to grow. At least 127 activists were arrested in demonstrations over the weekend, the largest group yet.

Police detained activists on an array of serious charges, including reckless endangerment, engaging in a riot, assault on a peace officer and resisting arrest, CNN reported.

For months, indigenous groups have led protests against the enormous, nearly 1,200-mile pipeline. If constructed, it would transfer roughly 470,000 barrels of crude oil per day across several states, from North Dakota to Illinois.

Indigenous leaders warn the oil pipeline could pollute their water and land. They call themselves not protesters, but "protectors."

Local authorities in North Dakota, particularly the Morton County Sheriff's Department, have harshly clamped down on the protests. Activists said authorities sprayed them with mace and violently threw them to the ground over the weekend.

Indigenous activists also said that, when they were asked to disperse, they tried to do so but were surrounded by police. Their group, which included elders and children, was then attacked. A young woman was hit with a police baton, they said.

On Sunday, self-described water protectors reclaimed unceded territory that they said was "affirmed in the 1851 Treaty of Ft. Laramie as sovereign land under the control of the Oceti Sakowin," the indigenous name for the Sioux. This camp is on the proposed path of the Dakota Access pipeline.

Activists put up road blocks on a highway and county road on Sunday, closing them for several hours. The indigenous rights group Honor the Earth said in a statement that the blockades were set up to protect their "camp from overtly militarized law enforcement."

Mekasi Camp-Horinek, an Oceti Sakowin camp coordinator, added in the statement: "We will be occupying this land and staying here until this pipeline is permanently stopped. We need bodies and we need people who are trained in non-violent direct action. We are still staying non-violent and we are still staying peaceful."

Indigenous leaders stressed the environmental destruction the $3.8 billion oil pipeline could bring. "I'm also taking this action to protect the water and for the future generations in alliance with and an accomplice to the first people of this nation," activist Michael Bowersox said in a statement. "I hope other people will step up to stop this pipeline from being built; we can't be dependent on fossil fuels if we expect the children seven generations from now to have a healthy earth, environment, and clean water to drink."

At past protests, private security forces hired by the pipeline company have used mace and even attack dogs to intimidate peaceful protesters. One of the dogs seen in video footage captured by the independent news outlet Democracy Now had blood in its teeth and mouth.

Over the weekend, authorities also shot down a camera drone activists were using in order to document police brutality. Sheriff Kyle Kirchmeier claimed the drone was "threatening" and said it violated Federal Aviation Administration rules. Police continued to use a helicopter to surveil the activists.

In an interview with NBC on Sunday night, the Standing Rock Sioux Tribe called on the Department of Justice to intervene.

"Police are also routinely strip-searching protesters, even when they have only been charged with a misdemeanor offense. Like days of old, this is a thinly veiled attempt to dehumanize and degrade Native people," he said, CNN reported.

“It seems that there is a specific intent by the state of North Dakota and the Morton County sheriff’s office to identify journalists or others that are bringing light to the police response and the state response to the protests, which we, the ACLU, would consider heavy-handed and highly militarized,” Jennifer Cook, policy director for the group, said.

"It is absolutely concerning that private security would use such excessive force against protesters that are nonviolent," Cook added, noting that accusations of trespassing does not justify "using attack dogs and pepper spray against individuals that are expressing their dismay with the activities that are ongoing."

The Standing Rock Sioux tribe filed a lawsuit in July arguing that the Army Corps of Engineers did not follow proper procedures when authorizing the Texas-based fossil fuel company Energy Transfer Partners to build the pipeline. In September, a federal judge ruled in favor of the pipeline.

Immediately after the judge's decision, nevertheless, the Department of Justice, Army and the Department of the Interior made a surprising call for a temporary delay in pipeline construction on lands within 20 miles of Lake Oahe, which traverses the border of North and South Dakota.

Hundreds of activists from around the country have joined indigenous groups in solidarity demonstrations against the Dakota Access pipeline, including those from Black Lives Matter and the Palestinian solidarity movement.

Actress Shailene Woodley has been particularly outspoken in support of the protests. She was arrested among a group of 20 activists on Oct. 10.

Jill Stein and Ajamu Baraka, the presidential and vice presidential nominees for the Green Party, have also faced misdemeanor charges for participating in protests against the pipeline. Award-winning journalist Amy Goodman faced potential felony riot charges as well, although they were dropped due to a lack of evidence.

Morton County Sheriff Kyle Kirchmeier, whose office has overseen the clampdown, condemned the protests. He claimed they were "intentionally coordinated and planned by agitators with the specific intent to engage in illegal activities."

LaDonna Allard, a Standing Rock Sioux tribal member who founded what they call the Sacred Stone Camp, stressed in a statement that indigenous cultural and historic sites are being threatened with destruction by the pipeline.

She said authorities are breaking the law and violating the Advisory Council on Historic Preservation's Executive Order No. 13007, on Indian sacred sites. She also argued that the Dakota Access pipeline violates the American Indian Religious Freedom Act, the Native American Graves Protection and Repatriation Act, the Archaeological Resources Protection Act and the National Historic Preservation Act.

Allard told the North Dakota State Historic Preservation Office, "Just because you accepted the money from the oil company does not mean you have the right to violate our rights."