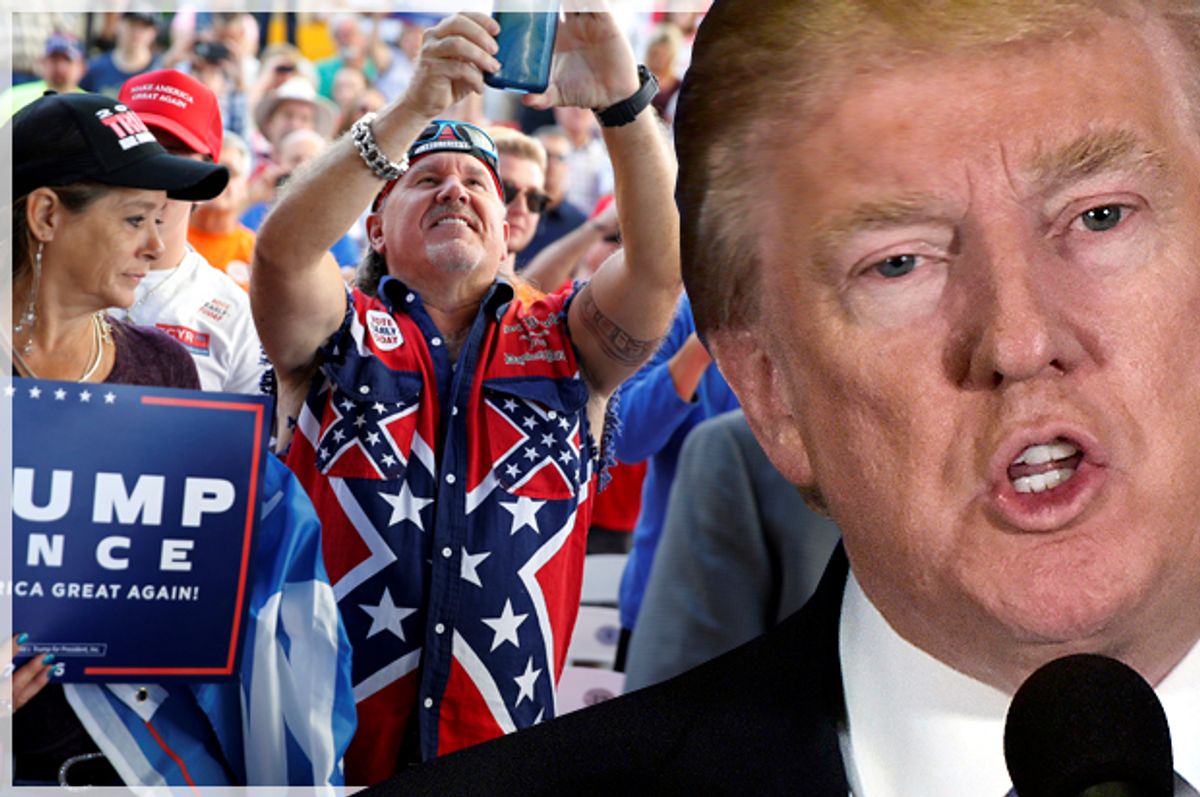 Last Saturday, Donald Trump journeyed to the battlefield in Gettysburg, Pennsylvania. This is hallowed ground where 51,000 Union and Confederate soldiers were killed, injured, captured or missing in the summer of 1863. Gettysburg is also the site where President Abraham Lincoln delivered one of the most important speeches in American history.

One of the United States’ greatest presidents, Lincoln saved the Union and helped to end the institution of chattel slavery in America. Lincoln would be martyred for his struggle. By comparison, Trump is a reality TV show star, a failed businessman, a political performance artist and wannabe professional wrestler, a fascist and alleged profligate nonconsensual grabber of women’s genitalia.

Lincoln’s Gettysburg Address is an example of soaring oratory in which a president during a time of war reflected on human freedom, dignity, democracy and the United States Constitution. Trump tried to piggyback on Lincoln’s legacy with statements such as “It is my privilege to be here in Gettysburg, hallowed ground where so many lives were given in service to freedom — amazing place” and “President Lincoln served in a time of division like we've never seen before."

Trump continued, "It is my hope that we can look at his example to heal the divisions we are living through right now. We are a very divided nation.”

His final argument for why he should be elected president on Nov. 8 also consisted of promises to punish the women who have accused him of sexual assault: “Every woman lied when they came forward to hurt my campaign. The events never happened, never. All of these liars will be sued after the election is over.”

The Clinton machine is at the center of this power structure. We’ve seen this firsthand in the WikiLeaks documents in which Hillary Clinton meets in secret with international banks to plot the destruction of U.S. sovereignty in order to enrich these global financial powers.

And likewise the emails show that the Clinton machine is so closely and irrevocably tied to media organizations that she is given the questions and answers in advance of her debates. Clinton is also given approval and veto power over quotes written about her in The New York Times. And the emails show the reporters collaborate and conspire directly with the Clinton campaign on helping her win the election.

This is a struggle for the survival of our nation. This election will determine whether we are a free nation, or whether we have only the illusion of democracy but are in fact controlled by a small handful of global special interests rigging the system. This is not just conspiracy but reality, and you and I know it.

Trump’s plans for his first 100 days in office also consist of enacting tired and tedious talking points from right-wing think tanks such as “term limits” on Congress, “hiring freeze on all federal employees” and a “requirement that for every new federal regulation, two existing regulations must be eliminated.”

It is easy to mock the arrogance and absurdity of Trump’s daring to give his own version of the Gettysburg Address. His speech last Saturday, however, is a reminder of battles and fissures along the color line in America that have still not been closed or resolved some 150 plus years later.

In the United States, the scars of race along the color line take many forms. The race and wealth gap is persistent. Segregation in housing and public education remains at unacceptably high levels. Police thuggery and violence against nonwhites is rampant and unrepentant. The criminal justice system punishes blacks, Latinos and First Nations people more severely than it does for whites who commit the same crimes.

The Republican Party is the United States’ largest de facto white identity organization. For almost 50 years it has used a coordinated strategy of overt and subtle racism against black and brown people to win white voters. The contemporary Republican Party is also a revanchist and radical organization that has passed laws to suppress the votes of African-Americans.

Republican elected officials and other leaders have routinely used 19th-century language about a new “civil war," “secession," and “nullification” in their efforts to oppose President Barack Obama. Trump, the GOP's 2016 presidential nominee, is one of the primary architects of the racist conspiracy theory known as birtherism and leads a coalition of white voters who are overwhelmingly motivated by bigotry and racial animus.

In many ways, today’s Republican Party is the Confederacy reborn: What was once the party of Lincoln is now that of Jefferson Davis and Donald Trump.

After the horrors of the Civil War, white America needed to find a way to heal its metaphorical and literal wounds. Driven by a desire for what historians have described as “reconciliation” and “redemption,” the events of the Civil War were rewritten and reimagined. The Confederacy was now to be depicted not as a group of secessionist traitors but instead as a noble “Lost Cause."

Reconstruction — one of the most successful experiments in American democracy — was framed as a failure and “proof” that African-Americans are incapable of self-governance. To that end, the horrific institution of white on black chattel slavery would be transformed into something “benign” and “benevolent.” This myth of the “happy slave” on ye olde plantation endures to the present in racist propaganda such as the movie "Gone with the Wind."

White America’s efforts at redemption and reconciliation also involved domestic policies such as support for the Ku Klux Klan and white vigilante violence against (now free) black Americans as well as continuing the campaign of genocide against First Nations peoples in the West.

Advocates of the "Lost Cause" also believed that the Confederacy would have won the Civil War if the North had not “cheated” by using its larger population and far greater industrial capacity. Other pro-Southern historians and other advocates even went so far as to argue that General Robert E. Lee was undermined and betrayed by his underlings who conspired to rob the Confederacy of its rightful victory over the Union.

Trump channels this energy. He and his supporters believe that they are fighting a noble cause and that they will only be defeated because the election is “rigged” and the news media is “unfair” and “biased” against him. In earlier speeches, Trump has told his supporters that black and brown people in the “inner cities” will cheat and conspire to “steal” the presidential election from “real Americans,” i.e., white people who support Donald Trump. The Republican nominee has even gone so far as to order his minions to go to polling places on Election Day and intimidate people of color who are voting for his Democratic rival Hillary Clinton.

In an essay for McClean’s, University of Utah historian Bob Goldberg was quoted explaining the dangers of this narrative:

In that context, Trump’s claims that the fix is in when it comes to November’s vote could prove particularly dangerous. “If the basis of American democracy is compromised, you are in a situation where the people opposed to you are not simply wrong, they have committed treason, they are betraying the country,” says Goldberg. In some ways, it reminds the historian of the period just before the Civil War.

Most importantly, it cannot be overlooked that Trump’s closest advisers are deeply connected to the white supremacist and white nationalist movements. He has also used social media such as Twitter to share posts from white nationalists and Neo-Confederates. And Trump’s son and campaign adviser Donald Trump Jr. has defended the Confederate flag — what has been correctly called the “American swastika” — against charges that such symbols are hateful and encourage violence against black Americans.

While at Gettysburg, Trump chose to stop at the site of Pickett’s Charge. In that fateful advance, 12,000 thousand Confederate soldiers futilely attacked Union lines. Thousands of them would be cut down by bullets and cannon fire. These men, like the many other hundreds of thousands who fought on the side of the Confederacy, died and suffered to defend chattel slavery and a white supremacist reign of terror over black Americans. Writing at Dissent Magazine, Joshua Zeitz noted:

After reading over 25,000 personal letters and 249 journals penned by Union and Confederate troops, [Princeton University professor and Pulitzer Prize-winning author James M.] McPherson concludes that a “large number of those men in blue and gray were intensely aware of the issues at stake and passionately concerned about them.

A lieutenant in the Mississippi Twenty-eighth declared that “[t]his country without slave labor would be completely worthless.” To another soldier, the war’s objective was equally clear: protecting “rights and property bequeathed to us by our ancestors.”

Other Confederates preferred to couch their objectives in language carefully developed over the course of the antebellum period; rather than defend bondage or slavery — terms they seemed implicitly to acknowledge were laden with negative connotations — they instead insisted that the Southern struggle was to defend “the institutions of the whole South,” or “our own social institutions,” and they fiercely resisted, as did one South Carolina planter, the designs of Northern “fanatics to interfere with our domestic affairs.”

And as Confederate Vice President Alexander Stephens explained in his 1861 Cornerstone Speech, “our new government is founded upon exactly the opposite ideas [as those of slavery foes]; its foundations are laid, its cornerstone rests, upon the great truth that the negro is not equal to the white man; that slavery, subordination to the superior race, is his natural and normal condition. This, our new government, is the first, in the history of the world, based upon this great physical, philosophical, and moral truth.”

Stephens continued by removing any doubt as to the primary cause of the Civil War with his words that slavery “was the immediate cause of the late rupture and present revolution.”

Trump claims to hate “losers." Yet he identifies with one of the greatest lost causes in American history and its white supremacist struggle to protect (and spread) the wicked institution of white on black chattel slavery. This should not be a surprise: Trump is a racist, a fascist, a bigot, a nativist and a misogynist. The Confederacy fought for an ignoble cause, and Trump and his basket of human deplorables are a perfect fit with that struggle.

Ultimately, Donald Trump is a public menace. President Lincoln was one of America’s greatest statesmen and saviors. At Gettysburg on Saturday, Trump reminded the American people how the contrast between the two men could not be any greater.