Factions and fiction: No, the fractured Republican Party will not die and it will not realign — it is incapable of change

The GOP won't change, even after a raging post-election Trump hangover — instead, it'll order more hair of the dog 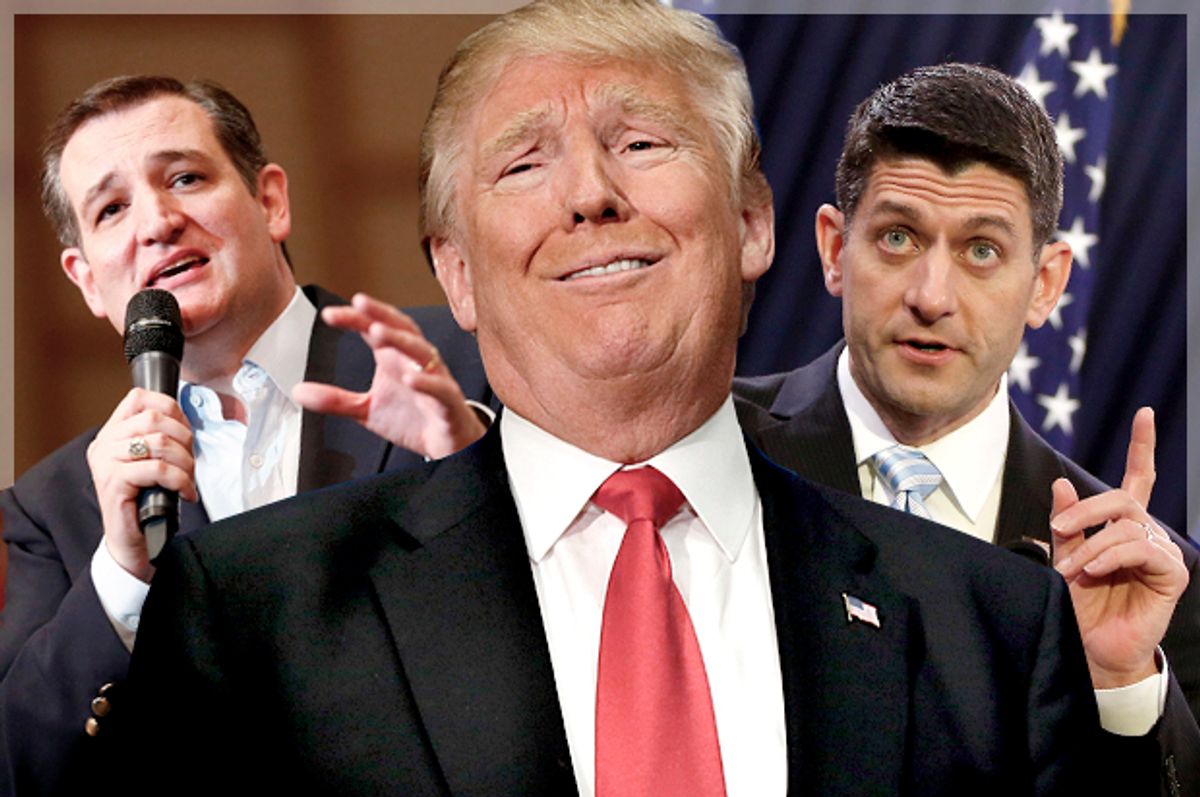 I'd like to preface all this by noting that it's still possible, though increasingly unlikely, that Republican nominee Donald Trump will win the election and become the 45th president of the United States. But as we careen toward Nov. 8, the polls appear to show his Democratic rival Hillary Clinton with as much as a 12-point lead among likely voters, with typically red, sure things like Texas emerging as improbable battleground states.

So, what follows assumes that Clinton will win the election, even though we won't know for sure until the polls close on the West Coast.

The common wisdom among cable-news pundits and political journalists is that the Republican Party will be forced into some form of realignment or, at the very least, a re-examination of how it should conduct politics in a post-Obama age. I hate to be the bearer of bad news, but there's simply no way that the party will adjust its overall posture.

Following the 2012 election, party luminaries met in private to conduct a postmortem, out of which emerged a pathetic attempt at outreach to women and minority voters, namely Latinos who are culturally religious and therefore were, at that time, still conceivably poachable by the GOP. None of it stuck — obviously.

And a few short years later, the party found itself with 17 candidates for president, and not one of them was able to seize the initiative against Donald Trump, who represents almost literally everything the GOP sought to repair during its 2012 postmortem four years ago.

The GOP will not change, even during what will surely be a raging postelection Trump hangover. Indeed, it will order more hair of the dog and continue its reluctant but unavoidable embrace of white nationalist Trump posture

Out of the 2016 election, and due to the GOP's incompetence combined with its superficial politics and dwindling core values, the Trump "alt-right" faction will emerge from the election with serious power within the party. Simply put: The GOP won't be capable of winning any elections without pandering to the Trump people whose activism will surely metastasize and expand.

This is precisely why the Republican National Committee's chairman, Reince Priebus, and House Speaker Paul Ryan have decided to not completely distance themselves from Trump. They need Trump and his band of Pepe the Frog disciples. The GOP will struggle to co-opt the alt-right, advancing the Trump venom through the bloodstream of the party, just as it did with the Tea Party in 2009 and 2010.

And contrary to the common wisdom in some circles online and off, the Republican Party won't collapse. Anyone predicting its death probably shouldn't be taken seriously. Instead, history will repeat itself and not unlike what happened with the Tea Party, the alt-right will wag the dog.

As you probably recall, after the 2008 election, the GOP ended up splitting down the middle, leaving an establishment faction and a Tea Party faction, the latter being controlled by characters like Ted Cruz, Marco Rubio, Scott Walker, Rick Scott and others who rose to power in reaction to the presidency of Barak Obama.

Eight years later, we're witnessing yet another split. This time, the Tea Party has fractured down the middle, with Cruz and his colleagues in the Freedom Caucus on one side and the Trump crowd on the other. Effectively three major subgroups have been been created within the party: the establishment GOP, which includes Paul Ryan and Mitch McConnell; the Freedom Caucus, led by Cruz, Walker and Rand Paul who emerged in 2010; and the Trump alt-right movement, led by Trump, Steve Bannon and their Breitbart minions.

The fear among normals is that the Trump faction will control the party, holding out its wild-eyed, open-carry loyalists as a threat during every election into the foreseeable future. And, to repeat, the establishment GOP will let it, emboldening Trump's power and diminishing the establishment GOP's ability to retain its grown-up stature. Knowing this and the GOP's inability to euthanize the monsters it creates, it's more important than ever for reasonable Republicans to step up and to guide the establishment faction away from its fringes.

As Trump has illustrated nearly every day, it's really easy to ignore the unwritten rules, and the damage such ignorance has wrought will be long-lasting, though limited to campaigning. It'd be far worse if Trump wins, thus infecting the presidency, too.

It may seem blasphemous to write this here, but, yes, there are many reasonable Republicans who understand and accept the rules. Consequently, they have bravely stood up against the Trump faction, and for their efforts, they've been relentlessly attacked and doxed, simply because they possess the foresight to know that Trump is bad for democracy.

These Republicans deserve to be acknowledged for finally understanding that the knee-jerk reaction to the Obama presidency has been allowed to bleed beyond the realms of merely disagreeing on policy. Instead, it's devolved into inchoate madness and childish lashing out, long-term consequences be damned.

It's entirely possible for those of us who recognize that America was built upon vigorously disagreeing on policy, but doing so with a sense of collegiality, to join forces — so that we can engage in fierce battle on the issues but grounded in a commonly accepted reality and accompanied with an acceptance that our leaders should remain firmly planted within the traditions and decorum that have held the nation together for most of its 240 years. If nothing else, this much of the Trump egg has to be shoved back into the shell.

The factionalization of the GOP is about to be locked into place for many years to come, and the opposition to Hillary Clinton's would-be presidency will get loud. But it's mandatory that the left help the reasonable Republicans to collectively reinforce the rules of politics that Trump and his cabal of nihilists have struggled to raze.