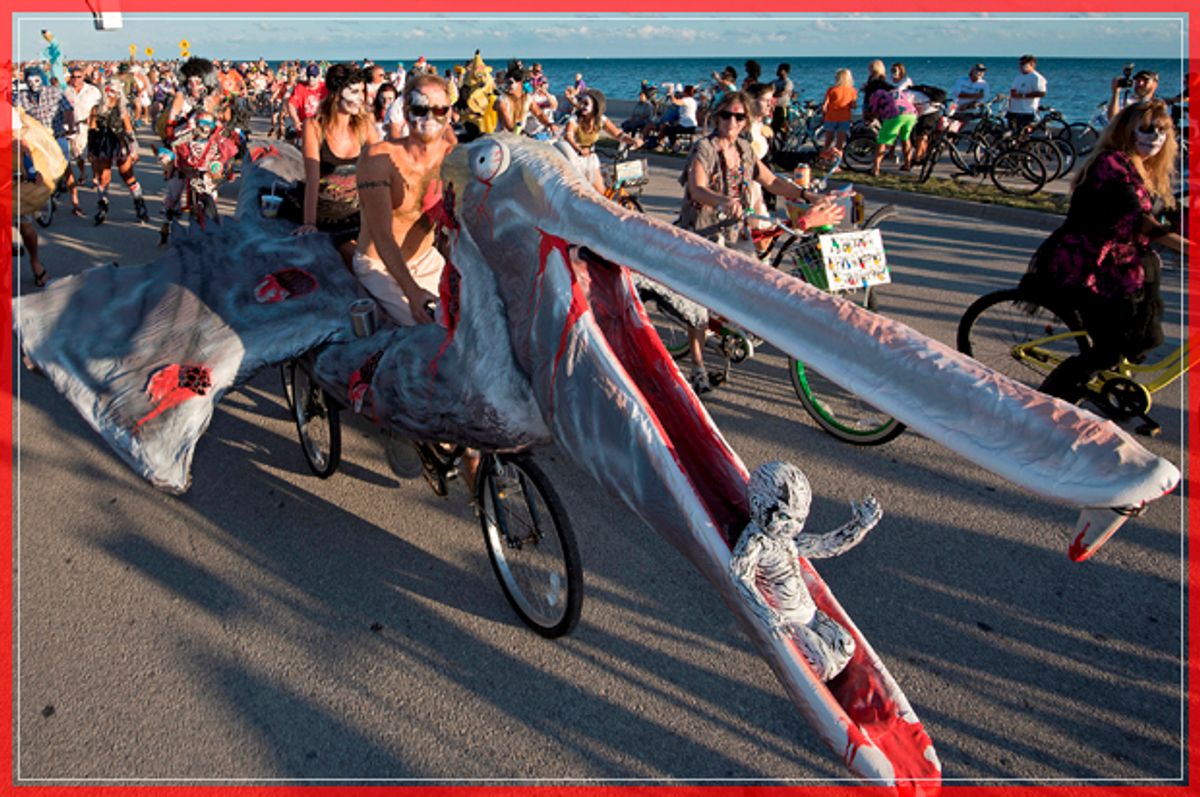 A zombie pelican bicycle is manoeuvred on South Roosevelt Boulevard during the Zombie Bike Ride as part of annual Fantasy Fest costuming and masking festival in Key West, Florida, U.S. October 23, 2016. Picture taken October 23, 2016. Rob O'Neal/Florida Keys News Bureau/Handout via REUTERS ATTENTION EDITORS - THIS IMAGE WAS PROVIDED BY A THIRD PARTY. EDITORIAL USE ONLY. THIS PICTURE WAS PROCESSED BY REUTERS TO ENHANCE QUALITY. AN UNPROCESSED VERSION HAS BEEN PROVIDED SEPARATELY. TPX IMAGES OF THE DAY - RTX2Q8WL (Reuters)
--

Star City, Russia    Ivan Sekretarev/AP
Two astronauts and one cosmonaut pose for a photo before their final preflight practical Hidden behind the rising tensions between the United States and Russia is the strange-but-true fact that our manned space program is, in effect, their manned space program. At least until NASA develops an entire new series of rockets and space vehicles -- or until Elon Musk's private-enterprise solution is ready to fly -- the only way Americans can get into space is by hitching a ride on Russian launches. If we can't make peace in Syria, maybe it can happen on Mars. This zombie pelican and demon baby were both a trick and a treat in preparation for Halloween at the Key West Fantasy Fest on Sunday,. But for Florida, a battleground swing state in the 2016 election, the scariest day of the year won't be October 31, it'll November 8. In fact, the theme for this year's festivities (Oct. 21-30) is "Political Voodoo & Ballot Box Barbarians.

New Delhi, India   Prakash Singh/Getty
A vendor puts chickens in a cage at an Indian poultry market. One month after India declared itself bird flu-free, two chickens died of the disease at the New Delhi Zoo I'm going to ignore the fact that these two chicken have bird flu, because it's too sad. Instead, I'll pretend that these chicken played a prank on some local villagers and are being put in time out. They'll only be in the cages until they learn their lesson. I feel better about the photo now. What is the best way to salute a chance swan encountered in a park? Did this woman at Bois de Boulogne in Paris on Tuesday know? Then again sometimes it's best to keep things under wraps.