John Oliver vows to stay in U.S., even if Donald Trump is elected

"I'm staying in this country like the string quartet stayed on the Titanic," Oliver cracked at a Tuesday event 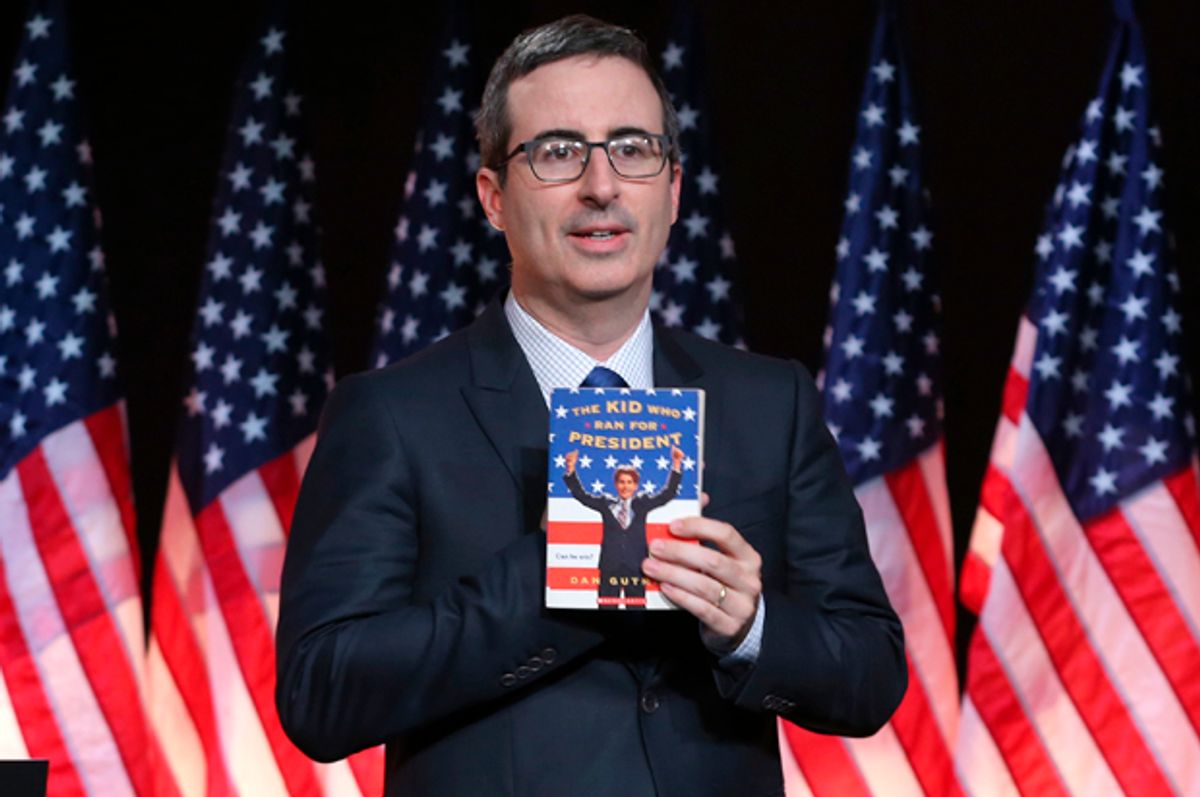 At the Center for Reproductive Rights gala on Tuesday night, the crowd was downright giddy. Stephanie Toti, a lawyer for the organization, had won in June a major Supreme Court case representing a Texas abortion clinic, Whole Women's Health v. Hellerstedt. That case set back the anti-choice movement a decade, and the crowd's good cheer was clearly fueled by more than the open bar at the event.

Despite this massive victory, women in the United States who seek to control their bodies still face major obstacles, especially in more conservative states. And John Oliver, the host of HBO's "Last Week Tonight," was on hand at the gala to crack a few jokes about exactly these challenges.

"Good evening, gentlemen — and nasty women," Oliver opened, referring to Republican nominee Donald Trump's immediately infamous swipe at his Democratic rival Hillary Clinton during this year's final presidential debate. He riffed a bit on the election before introducing honoree Dawn Porter, the documentarian behind the critically acclaimed film "Trapped," which his show drew heavily upon during a recent segment about the lack of abortion access.

"I'm not going to Canada," Oliver joked, referring to the possibility of Trump winning the presidency. "Armageddon is not enough to force me up there."

Added Oliver: "I'm staying in this country like the string quartet stayed on the Titanic. If Donald Trump swears into office, I will stay here for his inauguration, turning to the people to my left and my right and saying, 'gentlemen, it has been an honor.'"

Oliver continued: "His discussion of late-term abortions showed no real understanding of how abortions work, no clear understanding of the basic biology of women's bodies and a very poor sense of grammar as well." He added, "If you asked Donald Trump to draw a fallopian tube, I can't imagine what you'd get back, other than a child's drawing of a cobra."

After Oliver had everyone laughing, author Isabel Allende spoke more somberly about her lifelong support for feminism and reproductive rights. She told a terrifying story about a friend of hers who, having become pregnant at age 16, needed an abortion — in Chile, which still has no legal path to abortion.

"On a kitchen table, with no particular concern for hygiene, but with some anesthesia, the woman did the procedure," Allende said. "She was smoking. The radio was blasting and her kids were watching TV in the next room."

As as challenging the situation was, Allende's friend recovered.

"I didn't, however," Allende said, with a tremble in her voice. "I have never forgotten what happened in that kitchen. And it has been a recurring dream for me and a recurring theme in almost all my novels. That single event gave me a mission for life. I realized that all my theories about women's liberation were just that: theories. How can there be any freedom without control of your own body?"

While Allende and Oliver approached the issue from different points of view, the common thread was simple knowledge. To know the truth about women's lives and bodies and needs is to know that they need access to safe, legal abortion. Right-wingers who deny this are simply denying the obvious.

Later in the evening, while I spoke with Mississippi abortion provider Dr. Willie Parker, he told me a proverb: "You cannot wake those who are just pretending to be asleep." Allende's speech, as well as Oliver's, provided a vivid reminder of how true that is.