Michael Moore: People will vote for Donald Trump as a giant "F**k you" — and he’ll win 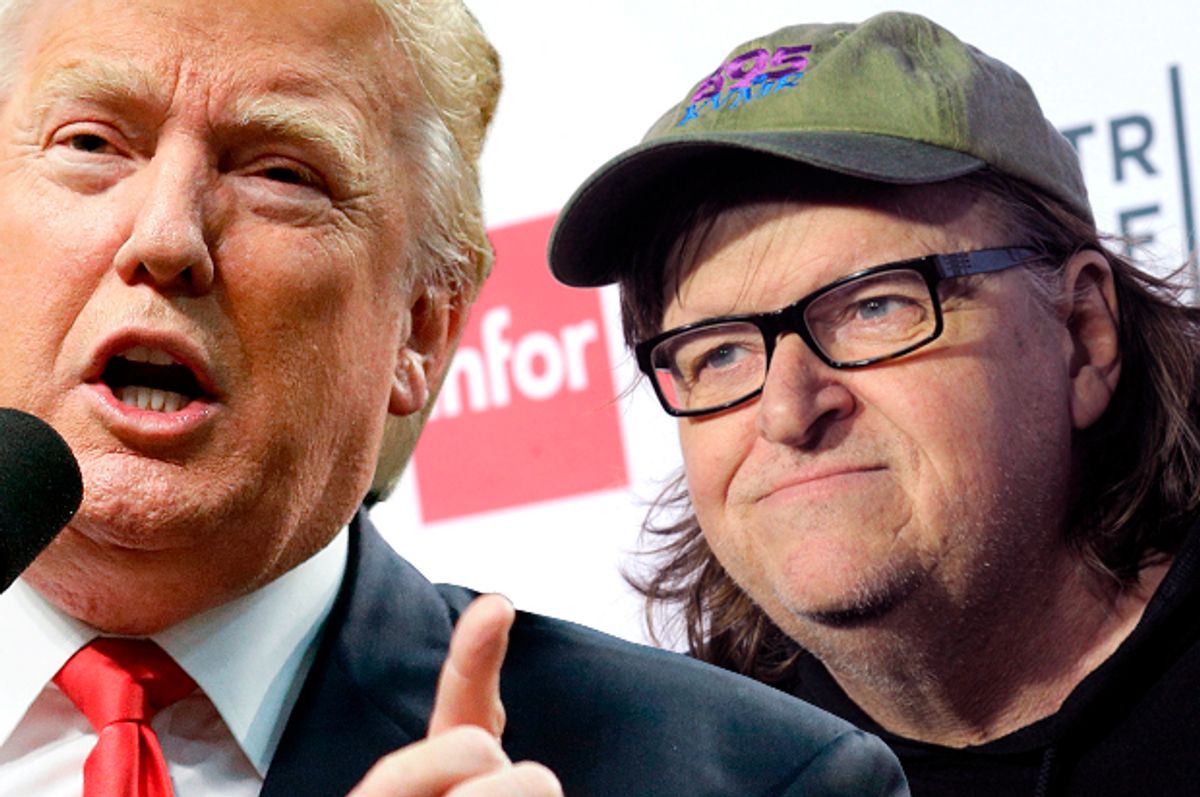 Despite most indicators showing Donald Trump well behind his Democratic rival Hillary Clinton in the key states he needs to win the Nov. 8 presidential election, populist filmmaker Michael Moore has long argued that the Republican nominee has more support than people may think.

At a recent promotional event for his new film “Michael Moore in TrumpLand,” Moore told audience members that he thinks the loudmouthed GOP nominee is going to win, largely because American elites are so cut off from regular people that they don’t realize just how much the middle class has been harmed in recent years.

“I know a lot of people in Michigan that are planning to vote for Trump, and they don't necessarily agree with him,” the left-leaning documentarian said.

Many middle- to lower-income people are going to support the former reality TV star because at least he uses language directly pertinent to issues that have affected their lives, Moore argued.

“Donald Trump came to the Detroit Economic Club and stood there in front of Ford Motor executives and said, ‘If you close these factories as you're planning to do in Detroit and build them in Mexico, I'm going to put a 35 percent tariff on those cars when you send them back and nobody's going to buy them.’ It was an amazing thing to see. No politician, Republican or Democrat, had ever said anything like that to these executives, and it was music to the ears of people in Michigan and Ohio and Pennsylvania and Wisconsin — the 'Brexit states.'”

Trump’s sincerity in wanting to stand up for the average Joe doesn’t even matter, Moore argued, because voting for him is a giant message that disaffected Americans will be happy to send to media and political elites who they see as not caring about them.

“Trump’s election is going to be the biggest ‘fuck you’ ever recorded in human history — and it will feel good,” Moore argued.

“Whether Trump means it or not is kind of irrelevant because he's saying the things to people who are hurting, and that's why every beaten-down, nameless, forgotten working stiff who used to be part of what was called the middle class loves Trump," Moore continued. "He is the human Molotov cocktail that they've been waiting for, the human hand grenade that they can legally throw into the system that stole their lives from them.”

Moore has repeatedly made clear that he does not support Trump, just that he can see why some people choose to. (He supported Sen. Bernie Sanders during the Democratic primaries and now supports Clinton.)

In an interview with Rolling Stone about "TrumpLand," the filmmaker said he thought many Trump supporters viewed voting for him as a way of being “legal terrorists." For that reason, people who oppose Trump need to be more careful in how they do so, Moore argued.

“You have to protect the population from him like you do with a pedophile," he said. "A pedophile doesn't need to be in prison; they're sick. They have to be separated from us so they don't hurt children. But you have to treat it that way.”