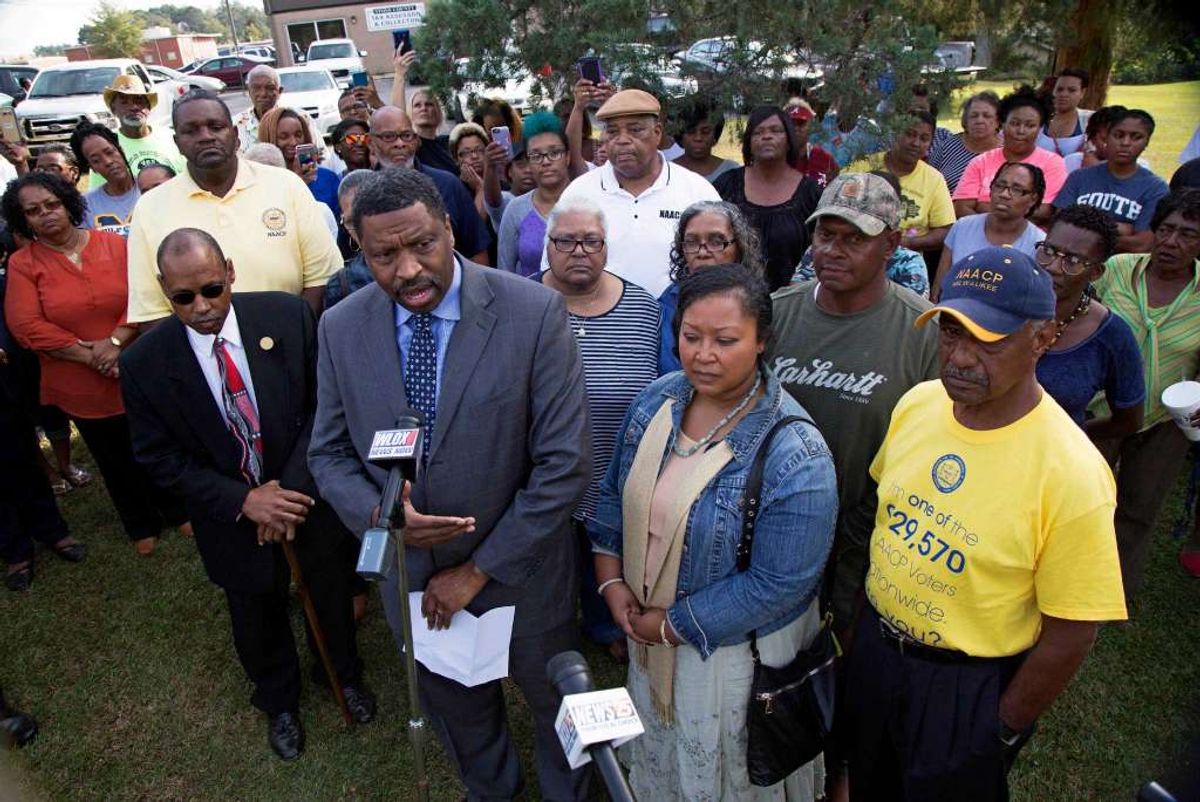 Derrick Johnson, left, president of the Mississippi NAACP, center left, talks to the media on behalf of Stacey Payton, center right, and Hollis Payton, behind his wife Stacey, in front of the Stone County Courthouse in Wiggins, Miss., Monday, Oct. 24, 2016. Johnson is demanding a federal investigation after the parents said four white students put a noose around their son's neck at school. (Max Becherer, AP)
--

The NAACP and the parents of a black high school sophomore who had a noose placed around his neck and "yanked backward" are continuing to call for a federal investigation of the incident as a racial hate crime.

After Derrick Johnson, the Mississippi NAACP president, on Monday morning called for a federal hate-crimes probe of an Oct. 13 incident inside a locker room at Stone County High School near the small town of Wiggins, a lawyer for the south Mississippi school district announced Monday afternoon that one student "was disciplined after due process in accordance with district policies."

Sean Courtney, an attorney for the Stone County school district, wrote in a Tuesday email that administrators had determined that the school's conduct code had been violated, the Associated Press reported. Courtney said he couldn't identify the student or the specific punishment, citing privacy rules.

The NAACP has alleged that the school district and local officials have mishandled the case from the beginning.

Johnson told ESPN that the black student's mother, Stacey Payton, reported the incident to the Stone County sheriff’s department but was discouraged from filing a report because one of the white students’ parents is a former law enforcement officer. Capt. Ray Boggs of the Stone County sheriff’s department has disputed that account, saying he told Payton that filing a criminal case could stir resentment among some students and bring her son trouble at school, according to the Associated Press.

The black student claimed he was accosted by as many as four white students and a noose was tied around his neck before he was eventually allowed to return to practice. For its part, the school has asserted that it disciplined only one student (not four) because only one had broken rules.

The school district also pushed back against claims that it had ignored the incident until the NAACP acted. "To suggest that the district did not follow its policies and procedures or otherwise not investigate and address this issue is patently false," Courtney wrote in a statement on Tuesday. "This matter has been one that tears at the fabric of our schools and our community and the administration does not intend for it to be swept under the rug or otherwise ignored."

At the press conference on Monday with the Paytons standing beside him, the Mississippi NAACP president called the incident a damming indictment of race relations in 2016.

“No child should be walking down the hall or in a locker room and be accosted with a noose around their neck,” Johnson said. “This is 2016, not 1916. This is America. This is a place where children should go to school and feel safe in their environment.”

The mother of a black middle school student in Wiggins who attended the NAACP press conference on Monday said that while Mississippi has long grappled with overt anti-black racism, tensions in town have recently escalated.

"I feel like it escalated from them allowing kids to bring Confederate flags" to school, Carissa Bolden told the Associated Press.

Johnson echoed Bolden's claim, claiming that some of the students involved in the noose incident had come to school earlier in the year “brandishing Confederate flags on their vehicles.”

“Allowing students to commit blatant hate crimes without severe consequences sends a message to students that their safety and well-being are not valuable enough to be protected,” he said.

According to the Mississippi Department of Education, Stone High School's 790 person student body was 72 percent white during the 2015-2016 school year.