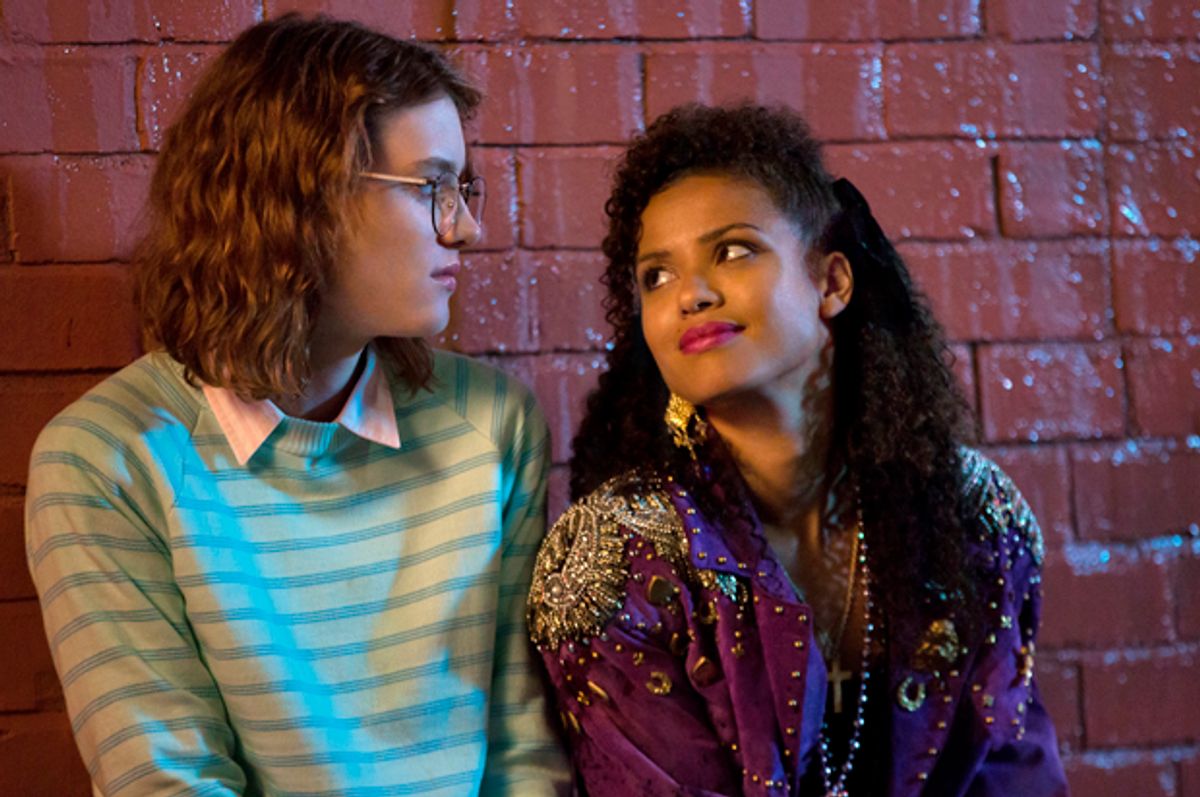 Note: Spoilers ahead for the "San Junipero" episode of "Black Mirror."

But as in the past — notably in bittersweet episodes like "Be Right Back" and "The Entire History of You" — the show also has a unique flair for romance. And the new season's standout "San Junipero," a twisty love story, is its best episode to date.

Set mostly in 1987, "San Junipero" tells the story of Yorkie (Mackenzie Davis), a shy, bespectacled newcomer to the titular "party town," and Kelly (Gugu Mbatha-Raw), the dazzling young woman who sweeps her off her feet and gives her a taste of first love.

If you haven't watched the episode, stop here and go watch. If you have, watch it again. Then come back and see if you caught the very satisfying trove of clues and clever nods along the way to the story's slowly unfolding reveal — that San Junipero is a virtual reality for the dying and dead, and that Yorkie and Kelly are two old women in their last days — on this plane anyway. Let's just say the DJ at Tucker's has a wry sense of humor. Let's go:

The opening shots of the episode establish the town of San Junipero — apparently named after the "eager for souls" Catholic missionary — with a poster of the 1987 classic "The Lost Boys," about a California town full of sexy young vampires. The poster's famous tagline? "Sleep all day. Party all night. Never grow old. Never die. It's fun to be a vampire."

Yorkie first appears exiting a car playing Belinda Carlisle's '87 hit "Heaven Is a Place on Earth" — because in the "Black Mirror" world, it is.

The camera pans to a shop featuring a wall of televisions blaring Max Headroom. Though you may be familiar with the popular '80s-era character, played by Matt Frewer, did you know the character's backstory? In the original TV movie, he's a man once named Edison Carter who, after a devastating motorcycle accident, lives on as a digital version of his former self.

It also wouldn't be a stretch to imagine that series creator Brooker, who also wrote this episode, is a fan of the famous Max Headroom "incident," one of television's first and still most fascinating hacks. It just happens to have taken place in 1987.

And Yorkie isn't catching a snippet of Headroom's TV show; it's his 1986 music video with Art of Noise, "Paranoimia." She gets to hear its opening line: "Am I dreaming? No. Where am I? In bed."

Yorkie spots Kelly and follows her into the nightclub Tucker's. The playlist at Tucker's appears to have been well-designed for a crowd that's passing through on a more ephemeral plane. Yorkie walks in to Robbie Nevil's "C'est La Vie" in time to hear Nevil sing, "Is this really what life's all about?" Throughout the episode, other songs played at or around Tucker's include "Fake," "Living in a Box," "Girlfriend in a Coma," "Ironic" and "Can't Get You Out of My Head." Sense a theme?

Yorkie beelines for the club's arcade games, takes some change out her pocket and looks at a quarter like it's a long-lost friend, and plays Bubble Bobble. A fellow clubgoer explains to her, "It's got different endings, depending on if you're one- or two-player." As she will soon learn. (Earlier this week, Vulture's Jackson McHenry persuasively argued that line can be interpreted in more than one way.)

Her new friend then tries to entice her to play Top Speed, an invitation that she — in reality, a woman who's a quadriplegic as result of a car accident that occurred more than 40 years ago — shudderingly rejects as soon as the red car in the game crashes.

Yorkie and Kelly meet when Kelly sidles next to her and enlists her in ditching her recent fling, Wes, who cryptically warns her: "Two hours, 35. There's not much time left."

"Last week was last week," she tells him. We later learn San Junipero's thrills are rationed out to visitors for just a few hours a week.

Kelly rejects Wes by saying she wants to spend time with her "friend," who only has six months to live. Yorkie replies, "Five." At first viewing of the episode, it seems like a conspiratorial lie. The second time, it sounds like an honest confession.

Kelly asks Yorkie about her glasses, which she quickly assesses are just for show. Who needs glasses in virtual reality? Kelly observes that the other people in the club "try so hard to look how they think they should look; they probably saw it in some movie," which is also logical for an alternate reality. Later, when Yorkie crosses over to permanent residency, she leaves her glasses behind on the beach.

Kelly invites Yorkie to dance, but Yorkie replies, "Dance floors aren't my thing. I can't." She then awkwardly attempts to groove — the audience doesn't yet know the real Yorkie is telling the truth when she says, "I've never been on a dance floor." She then runs outside as Alexander O'Neal sings, "You're a fake, baby," and holds her foot out in front of her — perhaps marveling at her virtual ability to do so.

Kelly comes outside after her and tells Yorkie, "Midnight's two hours away" and says, "We could be back at mine" in a finger snap. You realize later the finger snap seems a legitimate part of the offer.

A week later Yorkie gets ready to go out, in a brief montage showing her dressing like post-makeover Ally Sheedy in "The Breakfast Club" to the sounds of "Don't You Forget About Me," a video vixen to T'Pau's "Heart and Soul" and a slicked-back Robert Palmer girl to "Addicted to Love." She probably saw it in some movie.

Kelly runs into Wes, who begs to see her again, telling her, "The locals? They're like, dead people." They really are!

A guy at Tucker's tries to pick up Kelly by telling her about his kneecap surgery. Odd gambit, until you realize he's probably an old man in a bed somewhere, too. As they listen to "Living in a Box," he tells her, "I never got this song." Never, because it's from the distant past. Then he reminisces with her about how he wishes he had caught "that first wave" with computing, and looks meaningfully at his watch, knowing he's short on time.

Kelly and Yorkie have a minor car accident, which scares Yorkie until she realizes she's safe. Nobody's going to get hurt here.

When Kelly takes Yorkie back home with her, Kelly says that her abode "reminds me of where I grew up." Why wouldn't she design a virtual place that looks like home? Yorkie picks up a photograph of a smiling young woman under a banner that says "Happy birthday Alison," and asks Kelly, "Miss your mom?" Late in the episode, Kelly reveals that Alison was her daughter, who died at 39, before the advent of San Junipero. In the show's final moments, Kelly's headstone shows her name — and those of her husband Richard and daughter Alison.

When a postcoital Kelly asks Yorkie about her relationship with her fiancé, Yorkie explains, "It's complicated." Kelly, in return, explains that she had never "acted on" her attraction to women because she was in love with her husband, who "chose not to stick around." Both of their backstories will show those statements are not as simple as they initially appear. The two of them just quietly gaze at each other as the clock turns to midnight, and the screen goes black until once again it's "One week later."

The town's dark, anything-goes club, where denizens with rougher tastes wind up, is called the Quagmire — the word for a murky, difficult to get out of situation. Is the Quagmire the "Black Mirror" version of hell? (There is somebody with horns there, after all.) Purgatory? Just a cautionary warning of what happens when you linger in heaven — or listen to "Walk Like An Egyptian"— too long?

At the Quagmire, Wes offers the episode's first concrete reveal, telling Yorkie to look for Kelly in "a different time." The screen card then reads "One week later" in an early computer-era font and Tucker's has been transformed into a 1980 "Funkytown" dance club. Kelly next skips to 1996, complete with a mid-1990s "One week later" font, where the movie poster is now "Scream."

Another jump, complete with a post-Y2K "One week later" font, and it's 2002, where "The Bourne Identity" is playing. San Junipero really loves its blockbusters about people who aren't what they seem, huh? And when she finds Kelly in 2002, Yorkie exasperatedly asks her, "How the hell is this your era?"

The second half of "San Junipero" pays off all the clues, as the "Black Mirror" time present day Kelly and Yorkie play out their love story. And in the end, as "Heaven Is a Place On Earth" reprises, Yorkie is now shown in the driver's seat as Belinda Carlisle sings she's "not afraid anymore," taking off in her own red car with her loving wife Kelly beside her. In the episode's final shot, Yorkie and Kelly, dancing in eternal bliss at Tucker's in their reality, are also shown to be a small capsule being put into storage in a futuristic facility. The name of the company? TCKR. Well played, "Black Mirror." Well played.