I once embraced these diet and detox manuals with a back-to-school kind of optimism, but no more 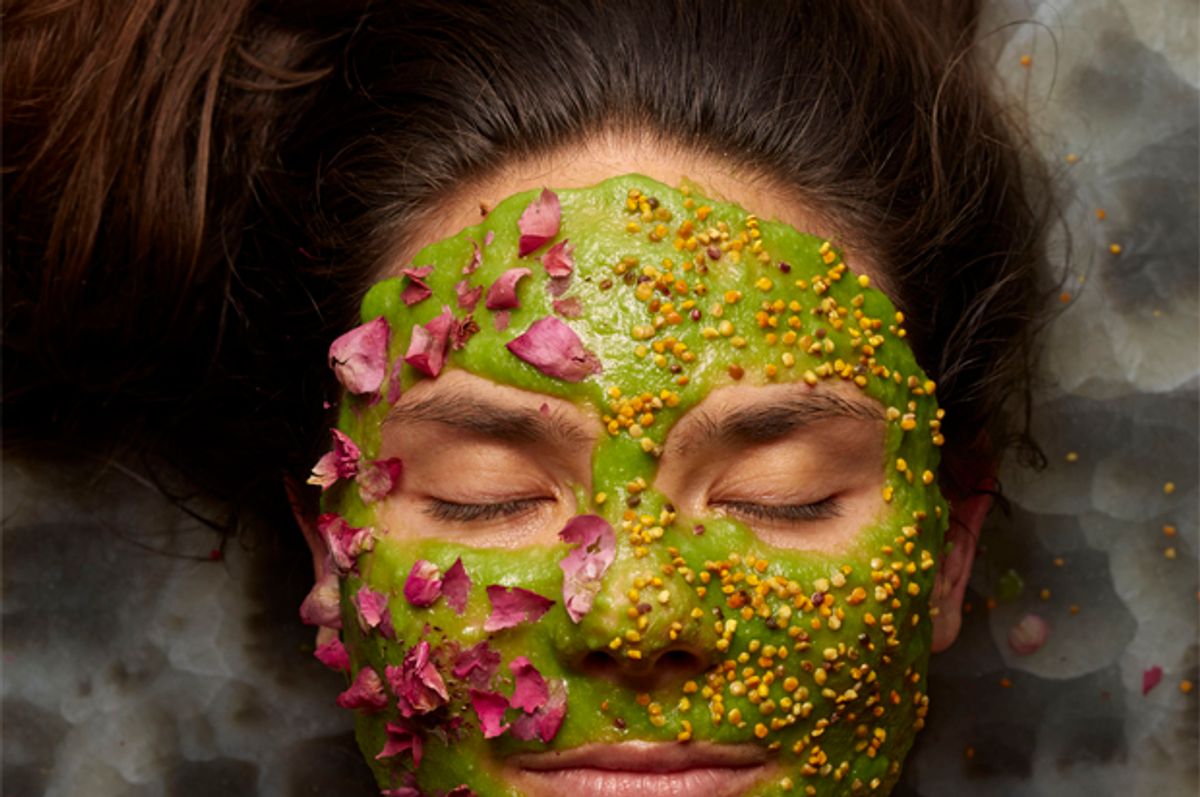 Last winter when I moved to California, I pared down my cookbooks. Gone were “Jerusalem” and “The French Laundry Cookbook,” “The Italian Country Table” and “Mexican Everyday.” The kitchen was all but nonexistent in my new space, so the sole resource I committed to was a cheery paperback, recipes I could make with my blender: “Simple Green Smoothies” by Jen Hansard and Jadah Sellner.

Admission: In the not-so-distant past, I had a weakness for “haute healthy” eating, especially when the cool girls make it look so good, so earth-princess natural, with their lustrous hair and glowing skin. The last few winters I’ve anticipated the annual Goop Detox with the kind of fervor I once felt for back-to-school shopping.

No matter that I don’t eat raw, vegan or “clean” 365 days a year: For most of my 20s, I tried to embrace the silliness of the whole cycle, to find joy in the hope, however slim, that maybe this time the cleanse or the detox would remake me. It was the same faith I used to hold that if I could just commit to writing in my assignment book every day, I would become the perfect student.

So maybe I’m changing. And counterintuitively, maybe changing means becoming more sure in myself. Because when my copy of “The Moon Juice Cookbook” arrived, complete with gratis packets of Sex Dust and Brain Dust powders, I didn’t feel that same sense of possibility that a new diet — indeed, a new lifestyle — once promised.

When I read through chapters like “Rethink Your Kitchen Practice,” wherein I might “experience profound internal changes”; when I am told “we are all born to be alchemists” on my way to reading recipes for concoctions like “Lazy Green Broth” or “Dulse & Vinegar Almonds,” I felt — well, fed up.

Do I want to reacquire all 70 garbage bags of possessions I donated in the aftermath of KonMari? To disavow minimalism? I am certainly ready to applaud its challengers.

In an essay for The New York Times, “The Oppressive Gospel of Minimalism,” Kyle Chayka wrote, “as an outgrowth of a peculiarly American (that is to say, paradoxical and self-defeating) brand of Puritanical asceticism, this new minimalist lifestyle always seems to end in enabling new modes of consumption, a veritable excess of less. It’s not really minimal at all.”

That these “new modes of consumption” are dressed up with crystals and chakras is part of what makes Bacon’s “wellness boutique” so disturbing. The mishmash ethos is visible, even in that usually most-benign section of cookbooks, the equipment section. For a fermenting jar, “German ceramic . . . is the ideal”; a broth pot should be “at least 6 gallons” because “once you’re in broth mode, you want to make sure your pot is large enough to match your intentions.”

Bacon wrote, “I still take a minimalist approach to cooking,” adding, “which is why you’ll need only a few essential tools.” Only 10 tools are listed to mimic Bacon’s “minimalist approach.” And though her catalog begins modestly — a knife, a mandoline (she didn't mention how cheaply these can be obtained if you buy the better, plastic Japanese variety) — it grows to include a whole cabinet full of kitchen supplies, not least of which are a juicer and a dehydrator, two machines integral to producing 99 percent of Moon Juice fare.

“The Moon Juice Cookbook” is the latest product by Amanda Chantal Bacon, proprietress of the Moon Juice brand. Bacon’s story is detailed in the first pages of the cookbook and beyond  widely on the web, so I’ll leave the juicy Googling to you. What you should know is that Moon Juice is both juice shop and “wellness boutique,” selling its own blends of “Moon Dusts” and “Moon Milks,” “cosmic provisions” — not to mention jars of cayenne pepper ($8 for 1.42 ounces), cordyceps powder ($35 for 3.1 ounces), herb tonics like Ho Shou Wu ($18 for 3.2 ounces), and, of course, a lifestyle.

Because the shops themselves and the author herself and the book itself are all beautiful: The book has rose-gold metallic stardust spattered across the cover, and end papers the pale lavender of an ingénue’s negligée. There is no dust jacket, as if to say, this book is a sight to behold without clothes — the way you might be, too, if you follow the lifestyle detailed in these pages.

Buried in the buzziness are two bisyllabic old bubbies of language that stand out like sore, sturdy thumbs amid their ethereal counterparts: “pantry” and “larder.” The jacket copy assures you that your pantry will be stocked, your larder filled.

The word larder comes from the Latin lardum or lāridum (bacon fat or lard) — (foodies or Francophiles will recognize lardons, those high-end bacon bits atop Salade Lyonnaise) — and pantry from panarius (bread seller) or panis (bread). Yet not a spot of pork bacon nor a slice of bread appears once in “Moon Juice.” That reflects precisely the weird culinary moment at which we have arrived.

The feminist philosopher Sandra Lee Bartky died on Oct. 18, a week before the publication of “The Moon Juice Cookbook.” “To be psychologically oppressed is to be weighed down in your mind,” Bartky wrote in her essay “On Psychological Oppression.” “It is to have a harsh dominion exercised over your self-esteem. The psychologically oppressed become their own oppressors; they come to exercise harsh dominion over their own self-esteem. Differently put, psychological oppression can be regarded as the ‘internalization of intimations of inferiority.’”

Inherent in a proposition like Bacon’s — “to [transform] your kitchen practices and [achieve] optimal wellness” — is the idea that the untransformed body is lesser, subprime, a lumbering sluggish mass of animal flesh and caffeine and gluten and sugar and booze.

The photography inside “The Moon Juice Cookbook” underscores the notion that what we talk about when we talk about “Golden Milk” is how to achieve a certain body — namely, Bacon’s body: lithe, aureate, ethereal. There’s Bacon, page after page, hands immersed in coconut oil, sumptuous hair bescarfed as she hoists a blossom-topped cake through some lush corner of California.

What would Bartky, who raged against the tyranny of slenderness, say about a chapter of dehydrated goodies called “The Unbakery?” (I might speculate: In “On Psychological Oppression,” she wrote, “It is hard enough for me to determine what sort of person I am or ought to try to become without being shadowed by an alternate self, a truncated and inferior self that I have, in some sense, been doomed to be all the time.”) The specter of cake-making haunts recipes for treats like Carrot Gingerbread Dough, suggesting that the old butter-flour-sugar bomb is, yes, gravely in need of new, better alternatives.

“Not only must we continue to produce ourselves as beautiful bodies, but the bodies we have to work with are deficient to begin with,” Bartky wrote. And today’s female bodies are not just deficient; they’re sick. “The Moon Juice Cookbook” begins with Amanda Chantal Bacon detailing the diagnoses and ailments — everything from Hashimoto’s thyroiditis to seasonal allergies — that drove her to juicing. A similar narrative opens Tess Ward’s “The Naked Cookbook.” Without broths and “moon pots,” juices and copious amounts of coconuts, how is a woman to exist?

Why do we so fervently try to police our diets? All of them — even reading diets — are varied. The National Enquirer entered my reading diet when I was a child. I had a great-aunt who kept a stack of back issues inside an end table for me to I flip through while she and my mother dished. The tabloids consumed me. I always began with the best-dressed section, where celebrities’ outfits were critiqued. It was the easiest activity for a 7-year-old to feel like she had a voice in: I, too, could judge, just like the row of comedians who were professionally tasked with the labor.

Today it remains a puerile task to lambast and lampoon the privileged, the beautiful — so, of course, we all do it. A cursory Google of “Amanda Chantal Bacon” reveals all the commentary the internet has to offer: snarky, awestruck, in other words . . . nastily two-faced. (Yes, Donald Trump almost made a complicated statement about how we — as in, all humans — construct identities.)

Rebecca Vipond Brink of The Frisky declared Bacon’s food diary (published in Elle to a shambolic chorus of reviews) was “like staring into a wound in the universe.” Others, like the women at Sakara Life, have called Bacon “one of those people you crush on from afar.” MyDomaine.com even allows you a glimpse into Bacon’s Venica, California, home, that kitchen with the “warm Calcutta gold” marble she waited months for (while it was being harvested in Italy).

Even though Bacon is obviously the mastermind behind Moon Juice, I don’t blame her for this book or the chronic inferiority it patently diagnoses in its yet-to-be-alchemized readers. What I do, however, question is the responsibility of publishing another book aimed at health-ifying, purifying and alchemizing the über-wealthy.

Because who else could afford the Moon Juice life? As The Frisky’s Brink wrote, “sure, you can buy whatever you want, but some people’s wealth baffles me, and the amount of oats, pasta, and canned milk you could purchase for a homeless shelter instead of $710 of herbal dust might actually blow Amanda Chantal Bacon’s yoga-addled mind.”

There’s a whole lot of truth in that statement, and Bacon seems to be overlooking the reality of her business — or purposefully misconstruing her mission. In an interview with OKREAL, Bacon said, “I also take [negative] comments as a sign that I’m reaching a wider audience, which is what I’ve always wanted for Moon Juice: to advocate happiness and healthiness within the mainstream. I want to speak to the 99%, not just the 1%.”

In her interview with Sakara Life, Bacon talked about her body, bigger than it might be if she didn’t go for those almond butter spoonfuls. She’s happier, though, at this weight because this weight lets her function optimally. “It's my push for everyone, the pat on the back and the hug, or whatever someone needs to hear to just go for it. Just give yourself that space to really explore and find the coziest, happiest, most loving you.”

As cosmically yummy as Bacon’s message might be, it’s discordant with the mission of a “wellness boutique.” And maybe that’s something everyone should learn, before life lets you be swept from one trend to the next, sipping green and eating naked and shaking adaptogenic powders into this drink and that.

Somehow, though, I don’t think that any of that will help destroy the psychological oppression of being a woman in a body today. In an Eater essay on 2016’s Domestic Goddesses, Emily Gould wrote about Gwyneth Paltrow, and her latest cookbook, “It’s All Easy”: “I had fun leafing through It’s All Easy, which is full of photos of G.P. in Eileen Fisher-y tunics and minimal makeup, looking pensively out of rain-streaked windows at European skylines and laughing jubilantly in quaint vegetable markets. I could will myself into this worldview, I thought.”