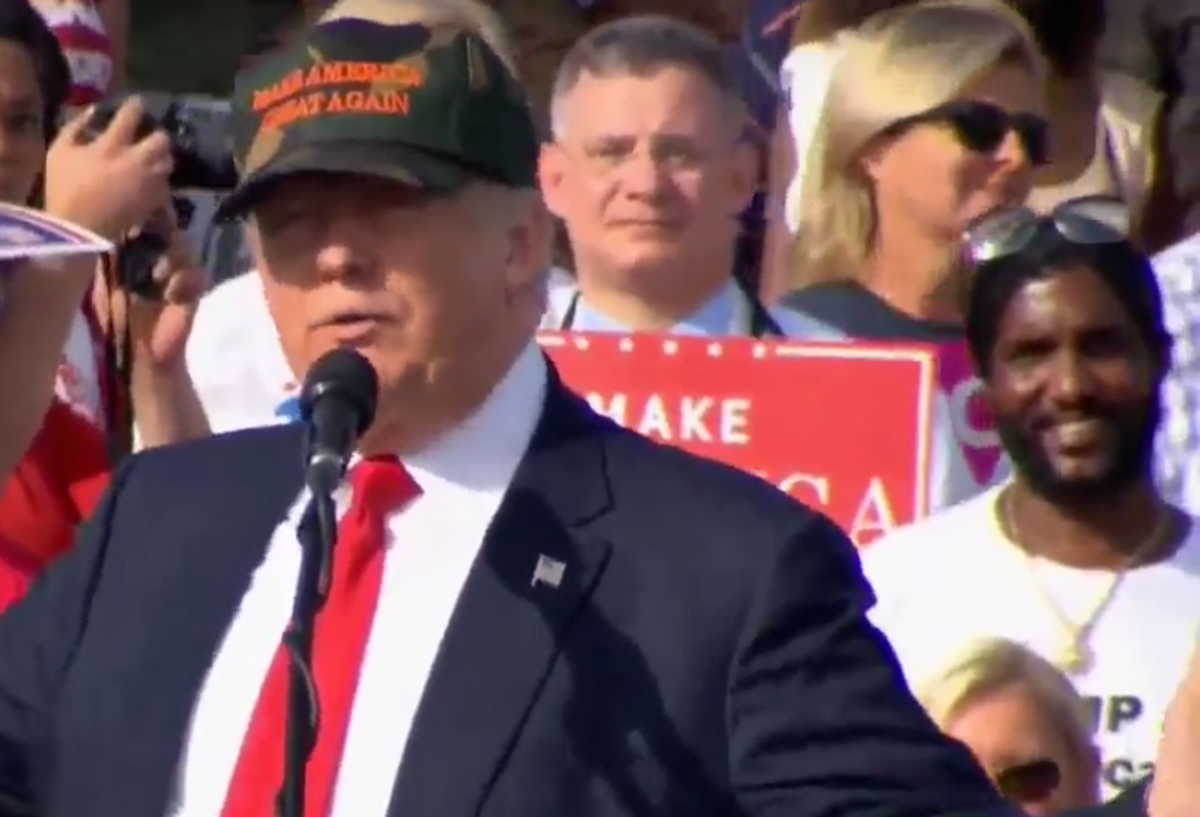 For good reason, social media was buzzing about a white woman holding a "Blacks for Trump" sign at Donald Trump's rally in Sanford, Florida, on Tuesday.

Unfortunately, the newsworthiness of the contradiction overshadowed the fact that the woman was with a multiracial group of people wearing matching shirts that read "Trump & Republicans Are Not Racist." At the bottom of the shirts was printed Gods2.com.

Gods2.com redirects to the personal website of Michael the Black Man (formerly known as Maurice Woodside and Michael Symonette), once a prominent member of the Nation of Yahweh, a violent black supremacist group prominent in Miami in the 1980s.

According to Miami New Times, Michael "was accused of two gruesome Yahweh murders in the '90s and has since been charged with — but never convicted of — four other felonies while starting his own bizarre religious enterprise."

Michael has since reinvented himself as a musician, according to the New Times, which described him as "an anti-gay, anti-liberal preacher with a golden instinct for getting on TV at GOP events."

During the 2012 Republican primary race, Rick Santorum invited Michael to open his campaign rally in Coral Springs, Florida. What started out as an unlistenable jazz set devolved into an unhinged rant in which Michael called the Democrats Nazis.

"The Democrats, they're the worst thing that ever happened to the black man," Michael told the crowd. "They're the slave masters."

The Nation of Yahweh lost momentum after its founder, Yahweh ben Yahweh (born Hulon Mitchell Jr.), was imprisoned in 1990 on 18 counts of conspiracy related to 14 murders, two attempted murders, extortion and arson. He was released in 2001 and died of prostate cancer in 2007.

Former NFL player Robert Rozier found Yahweh in 1982 after he was released by the St. Louis Cardinals. In 1985, he joined the Brotherhood, a more exclusive group within the Nation of Yahweh that allegedly required aspiring members to kill a white person as part of its initiation ceremony.

Rozier described his role in the cult as a "death angel" during Yahweh ben Yahweh's 1992 trial, in which Rozier was the star witness.

"We did everything from driving a bus to killing someone if necessary," Rozier testified. "Beating, hanging, burning, stoning, decapitation."

In recent years, a smaller number of followers have tried to breathe new life into the movement.

Michael, meanwhile, continues to post to his website — which declares devotion to Yahweh in the header — as well as his YouTube and Facebook pages. His posts include long-winded essays and video diatribes comparing Hillary Clinton to the biblical Whore of Babylon and/or explaining why she will start World War III.

He also attends his fair share of Trump's campaign events: