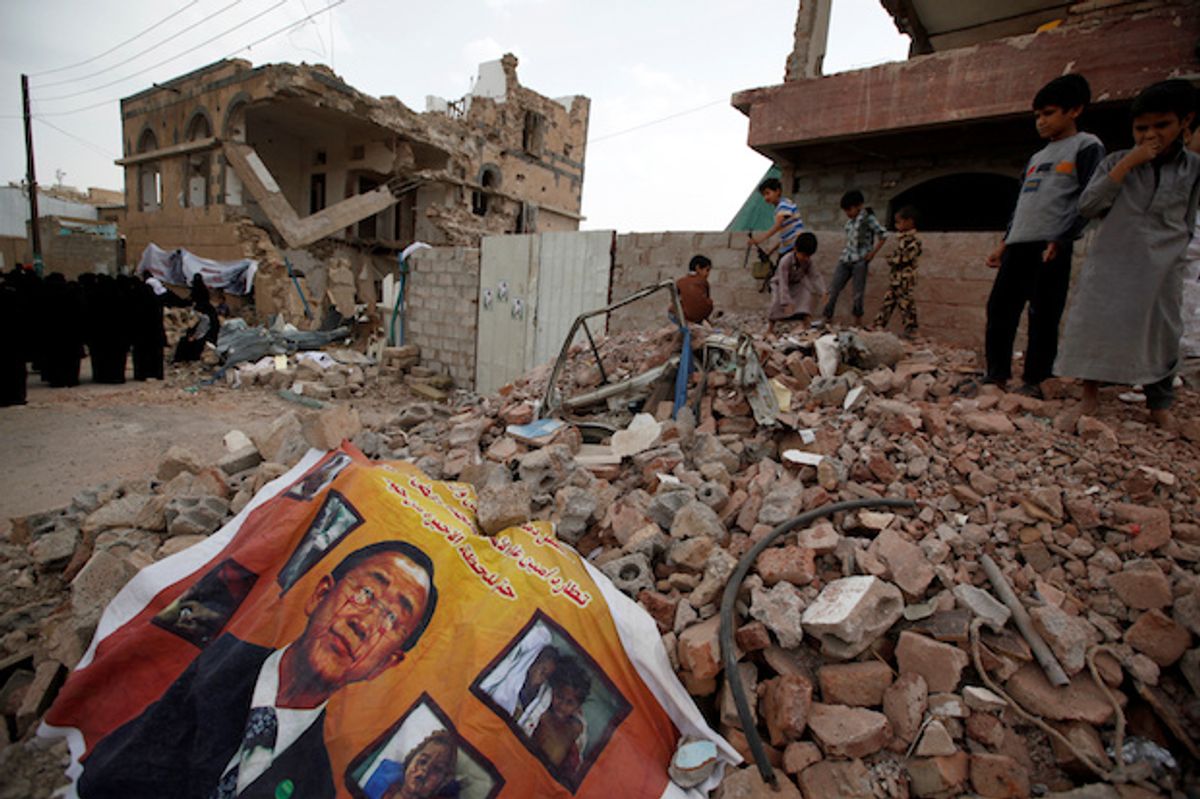 A defaced poster of the U.N. Secretary-General Ban Ki-moon on the rubble of a house during a vigil marking one year since a Saudi-led airstrike on a residential area in Yemens capital Sana'a, June 21, 2016 (Reuters/Khaled Abdullah)
--

Saudi Arabia, a theocratic absolute monarchy that carries out mass executions of dissidents, beheads drug dealers, systematically subjugates women and has supported extremist groups like al-Qaida and ISIS, was re-elected to the United Nations Human Rights Council on Friday.

Russia, however, was not. Croatia defeated it in a bid for re-election by just two votes.

The U.S. government has previously welcomed Saudi Arabia's ascension to the head of a U.N. Human Rights Council panel, noting the two are "close allies."

The oil-rich Saudi monarchy has used its position on the council to systematically cover up its own egregious rights abuses. With the help of its Western allies, Saudi Arabia has blocked independent investigations into the war crimes it has committed in its ongoing bombing campaign in Yemen.

Western human rights organizations, particularly Human Rights Watch, led a campaign to block the reelection of Russia to the council, citing atrocities committed by the Russian military and allied Syrian government forces in the ongoing war in Syria.

Other members of the U.N. Human Rights Council are responsible for their own crimes in Syria, nonetheless.

Saudi Arabia, in particular, has supported extremist Islamist rebels in Syria for years. The theocratic Saudi monarchy — which is based on a fundamentalist ideology known as Wahhabism, an ideology that is very similar to that of al-Qaida and ISIS — has spent billions of dollars helping to bankroll the CIA's program to arm and train anti-government Syrian rebels, many of whom later joined or collaborated with al-Qaida or al-Qaida-linked groups.

Classified U.S. government cables and a European Parliament report have long acknowledged that Saudi Arabia is the "critical financial support base for al-Qa’ida, the Taliban, LeT, and other terrorist groups."

Qatar, another theocratic monarchy that has likewise supported extremist groups in Syria, also remains on the U.N. Human Rights Council.

Both Saudi Arabia and Qatar, two close Western allies, have supported the genocidal fascist militia ISIS, according to U.S. intelligence sources cited in email from Hillary Clinton that was recently released by the whistle-blowing journalism organization WikiLeaks.

Some of the human rights rights organization that pushed for Russia to be removed from the council have previously also called for Saudi Arabia to be suspended — although these latter calls were quieter, and were not amplified by Western governments that support the oil-rich Saudi monarchy.

In June, Amnesty International and Human Rights Watch called for Saudi Arabia to suspended from the U.N. Human Rights Council, citing its “gross and systematic violations of human rights abroad and at home.”

“The credibility of the U.N. Human Rights Council is at stake,” Richard Bennett, head of Amnesty International’s U.N. office, said at the time. “Since joining the council, Saudi Arabia’s dire human rights record at home has continued to deteriorate and the coalition it leads has unlawfully killed and injured thousands of civilians in the conflict in Yemen.”

“To allow it to remain an active member of the council, where it has used this position to shield itself from accountability for possible war crimes, smacks of deep hypocrisy," Bennett added. "It would bring the world’s top human rights body into disrepute."

For 19 months, Saudi Arabia has led a brutal war in Yemen, the poorest country in the Middle East. Western-backed, Saudi-led forces have massacred thousands of civilians in a relentless bombing campaign that has targeted hospitals, funerals, weddings, schools, houses and refugee camps, intentionally destroying food production and exacerbating the mass hunger more than 14 million Yemenis are enduring.

The U.S. and U.K. have provided crucial support to the Saudi-led coalition in its war in Yemen, selling Saudi Arabia more than $115 billion worth of weapons, conducting thousands of refueling sorties for Saudi warplanes and giving intelligence and military support. Without Western support, Saudi Arabia would not be able to continue its war in Yemen, which has created what is likely the worst humanitarian catastrophe in the world.

Despite the war crimes committed by its Saudi ally, with its support, the British government refused to withdraw support for Saudi Arabia's membership on the U.N. Human Rights Council.

Saudi Arabia's promotion to the head of the panel came just a day before it announced that it was going to behead a peaceful activist from the Shia minority religious group who was arrested when he was just 17 years old.

Under President George W. Bush, the U.S. boycotted the U.N. Human Rights Council, accusing it of bias for highlighting crimes committed by its close ally Israel. President Barack Obama later reversed this position, seeking a seat on the council.

Both Republican and Democratic administrations, however, have claimed the council has put undue emphasis Israel's oppression of the Palestinians — while at the same time the U.S. has welcomed the participation of its ally Saudi Arabia, one of the most repressive and dictatorial countries on the planet.

China and Egypt were also re-elected to the U.N. Human Rights Council on Friday. Both countries have carried out an array of human rights abuses of their own. The latter, however, enjoys large support from the U.S. and an annual $1.5 billion in military aid.