The GOP's "Walking Dead": Utah Rep. Jason Chaffetz is the latest proof the Republicans are a zombie party

After the GOP's 2012 autopsy, its corpse has returned, shambling about in a mindless rage and spreading terror 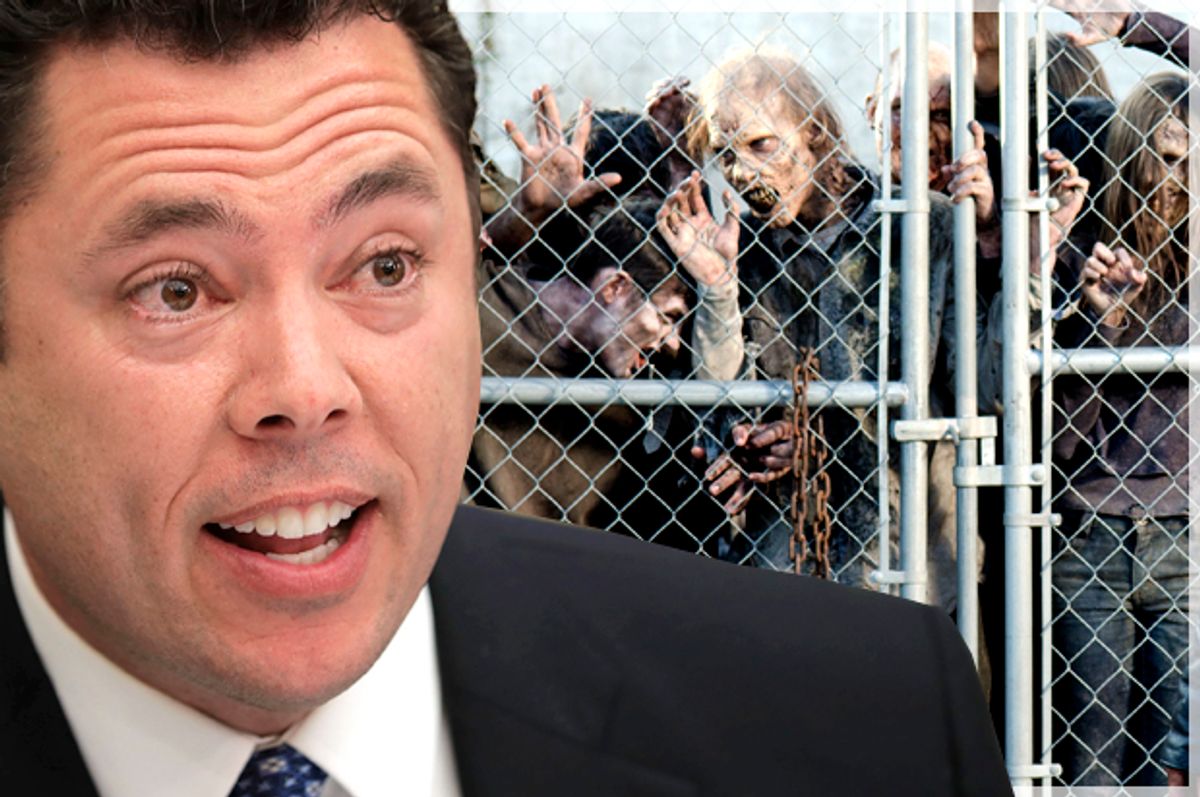 Let's congratulate Rep. Jason Chaffetz, R-Utah. He made news twice on the same day. First there was his Wednesday announcement that, as chairman of the House's government oversight committee, he or someone on his staff has pulled enough bullshit links about Democratic presidential nominee Hillary Clinton from right-wing websites to keep them busy investigating her administration for at least two years and more likely for the length of however many terms she serves as president.

Later on Wednesday, Chaffetz tweeted that even though just three weeks ago he pulled his endorsement of Donald Trump over the latter’s infamous “grab ‘em by the pussy” comments, he is still going to vote for the Republican nominee. And so Chaffetz becomes the latest member of the GOP’s “Vote for Him but Don’t Support or Endorse Him” caucus, made up of Republican lawmakers who profess horror that their party nominated for president a racist, misogynistic demagogue but will nonetheless cast their vote for him on Nov. 8 because Clinton is somehow worse.

It has become fashionable to declare the Republican Party dead or at least in a deep coma with little hope of recovery. The civil war now between Trumpism, as represented by the white ethno-nationalists behind Trump’s campaign and the #NeverTrump crowd, which includes the reformicons and the “intellectual” wing of the GOP, is at its roots a battle between two packs of hyenas over which one gets to pick the corpse’s bones clean.

Chaffetz’s actions this week, though, brought to mind another metaphor. The GOP is a zombie party, shambling across the countryside, spreading terror and devouring any living creature it comes across. There is no hope of reversing the condition. But unlike in, say, “The Walking Dead” or a George Romero movie, you can’t kill it forever by planting an ax in its head.

And unfortunately, because the GOP zombie cannot be killed, we are going to be stuck working our lives around it for the indefinite future.

Normally a major American political party functions as a coalition of disparate interests, all united under one banner for the purpose of achieving power and advancing interests. This has been true even in the Republican Party despite its growing ever more conservative over the years and driving its last liberal members out.

So under the Republican brand over the last couple of decades, there were neo-conservatives who saw the party as a vehicle for advancing an interventionist foreign policy. There were evangelicals who saw the GOP as a vehicle for fighting an ever more permissive social order, one that legalized abortion with few if any restrictions and sought to normalize same-sex marriages. There were worshippers of supply-side economics who saw it as a vehicle for cutting taxes and gutting entitlements.

The infamous GOP autopsy the party wrote after losing the 2012 presidential election recommended policy pursuits like immigration reform that could broaden its electoral appeal beyond its shrinking white base. Instead the base insisted on nominating for president a man who is now set to lose in an enormous landslide.

Meanwhile, the party has broken apart into warring factions. The Trumpist wing has access to and control over much of the party’s valuable voter data. Some of the true believers in conservatism as a political philosophy are talking about breaking away with independent candidate Evan McMullin and forming a new, true conservative party. Neo-conservatives like Bill Kristol have not yet figured out what to do.

The problem, as Chaffetz’s announcements this week show, is that despite all the divisions in the GOP, despite it being at this point not much more than a bunch of mailing lists and a scream reflex every time it hears the name “Clinton,” the party is still going to hold a significant amount of power in American politics. It will likely retain the majority in the House of Representatives and possibly also in the Senate. It will still control governor’s mansions and legislatures in a majority of states.

And what is it telling the voters it will use all that power for? Nonstop investigations of the Clinton administration; refusing to vote on a new Supreme Court justice to replace Antonin Scalia; probably some Obamacare repeal votes and new efforts to suppress the vote for minorities who overwhelmingly support Democrats.

What the GOP will not be doing is anything resembling governing. Like the zombie herds that are forever chasing humans across the landscape of “The Walking Dead,” it will amble along in a brainless rage, mindlessly attacking and attempting to devour any living creature that crosses its path. It will have no purpose beyond that. Any member of the party who has not become fully zombified will be chased down, bitten and reborn as a sentient corpse, wandering the land looking for a member of the Clinton administration to subpoena.

It is a bleak and dystopian future we face. Best to lock the doors and lay in a supply of canned goods before Election Day.