Liberals' blind faith: The silence on the misogyny in the Muslim world is deafening 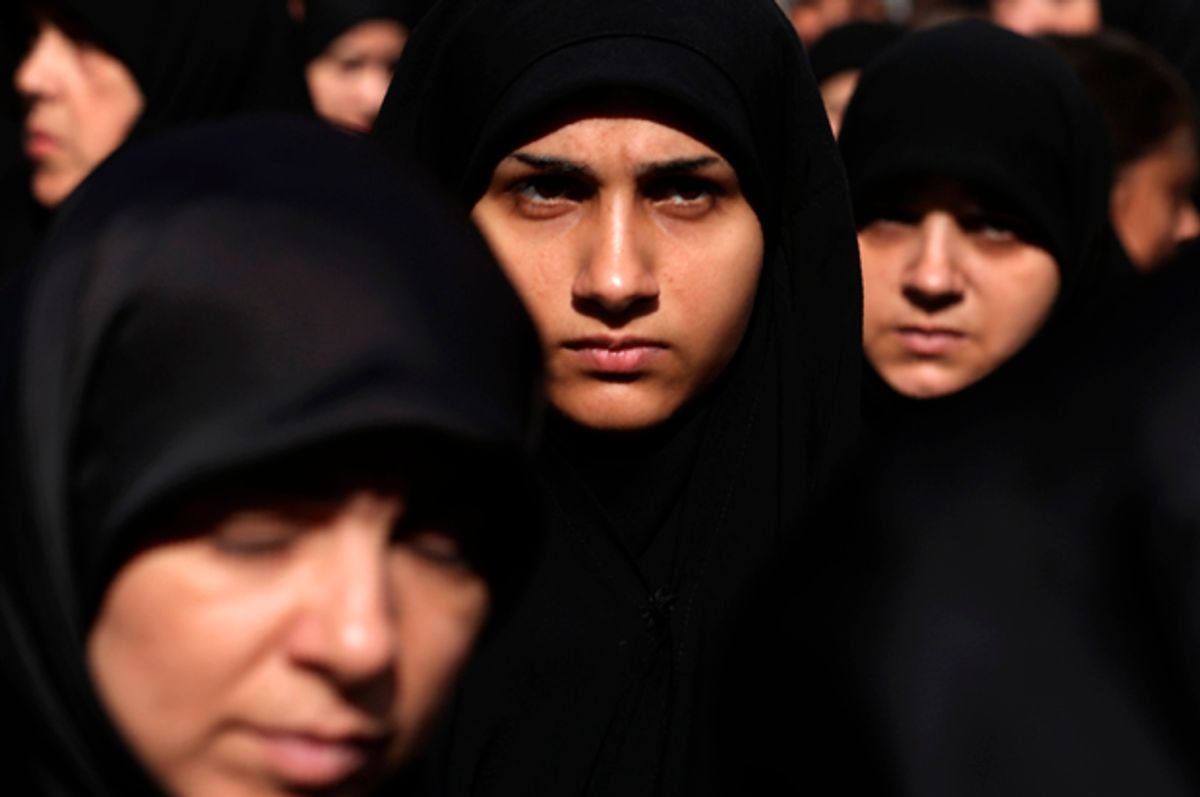 While Trump is wrong-minded as he pounds the drumbeat of "us vs. them" with the Islamic world, I also hope liberals can move beyond blind defense of the Muslim religion and assess it with greater nuance. I say this as someone who has endured considerable alienation by challenging the premises of Mormonism, my childhood faith (even after facing discrimination growing up because of my religion). While initially painful, thinking about Mormonism objectively has broadened my worldview and allowed me greater ability to analyze any institution, religious or otherwise.

I wish many Muslims and liberals would be so objective when looking at the brutally misogynistic behavior associated with some Muslims’ interpretations of sharia and reject the knee-jerk reaction that paints anyone who questions the modern Muslim world as Islamophobic. The refusal to do so is chilling those of us who unequivocally believe in women’s rights, who believe in freedom of expression, who believe in rationality and critical thinking. Last week in a #SalonTalks interview, author Amani Al-Khatahtbeh, who is otherwise incredibly talented and articulate, essentially said that the horrible French move to ban the "burkini" is essentially on par with an anti-woman acid attack; this is as false equivalency.

Bill Maher often wisely points out the hypocrisy of liberals and feminists whose calls for equality stop at the borders of Islamic thought and Muslim-majority countries. Liberals often take shots at Ayaan Hirsi Ali, a heroine who has risked more to dismantle the patriarchy than any American woman like Al-Khatahtbeh, who is lucky to be an American and not subjected to the obscenely anti-woman practices of genital mutilation, arranged marriage, acid attacks and more that many Muslim girls not living in the West are forced to endure.

Pew has done broad research on Muslims’ views of women. A disappointingly high percentage of Muslims worldwide, across all countries, believe a woman must obey her husband. Pew reports that Muslims in South Asia and Southeast Asia overwhelmingly hold this view, and that in all countries surveyed in these regions, some 90 percent or more say wives must obey their husbands. And in the countries surveyed in the Middle East and North Africa, about 75 percent or more say the same. 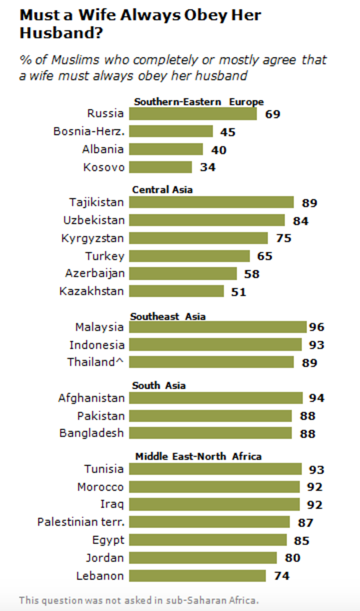 Then there is the issue of the veil. There is broad disagreement among Muslim-majority nations about whether women have the choice to remain uncovered or be forced to wear a veil, a textbook definition of patriarchy.

The sexist attitudes run deep and keep women in economic subservience. According to Pew, very few Muslim-majority countries have a majority of respondents who believe that men and women should receive equal inheritance. 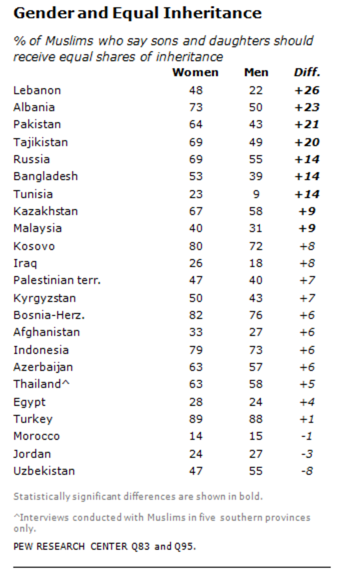 Sadly, the United Nations turns a blind eye to the abuses against women, in part emboldened by U.S. policy toward the Middle East.

“Defenders of women’s rights have been thwarted by the U.S. Administration’s disregard of reformers, and backing for the Islamist Muslim Brotherhood, despite Egypt and Tunisia deposing their Brotherhood affiliated governments. Women’s rights were also hindered in the UN when Iran was elected to the UN Commission on the Status of Women (CSW), and Islamist Sudan was nominated to join the UN Human Rights Council and the Economic and Social Council (ECOSOC), which elects members of CSW. Although the UN does important humanitarian work, it is overgrown with the weeds of a dysfunctional bureaucracy and spineless leadership, and has become a watering hole for states that are prepared to sanction sex discrimination and extremist ideology without fear of serious challenge by the world body.”

Some liberal observers have argued that global misogyny is agnostic; it can exist in any country dominated by any religion. For them, the Muslim world's misogyny is not inherently Muslim, but rather a twisted interpretation of Islamic law. And for this I am proud of liberal, rational Muslims: for being powerful voices calling for a reformed, moderated and pro-woman interpretation of Islam. Their voices must be bolstered and amplified.

Yet the truth remains that substantial majorities of Muslims in the Middle East, South Asia and Africa believe that sharia should be the basis of law in their countries. These Muslim majorities do not believe in the separation of church and state. It boggles the mind how Western liberals can hyperventilate about a harmless Christmas tree or the phrase "In God We Trust" even as Muslim countries are explicitly using sharia to defend their misogyny.

I have many Muslim friends, including women who are like sisters to me. I’ve lived and traveled extensively throughout the Middle East — I speak from a position of respect, not one of denial. There is much to admire about Muslim faith and culture. Just as I’m very proud of my Mormon friends for taking a principled moral stand against the bigotry of Donald Trump, I’m proud of many Muslims who have fought against the onslaught of hate released by Trump on Khizr and Ghazala Khan, a Gold Star, American Muslim family whose son perished fighting overseas to defend America. As a fellow religious minority, Mormons join with Muslims in understanding that Trump’s call for a ban on the followers of an entire faith is discriminatory and utterly un-American.

Even while speaking out and defending against the persecution of Muslims, non-Muslim observers should be able to point out that women receive subhuman treatment in many Muslim-majority countries without being accused of attacking Islam. We are simply saying that there are major problems in these countries and let's do something about it rather than defending Islam or attacking Islam. We are not anti-Muslim simply by being 100 percent pro-woman.