Not quite the new "Mad Men": Amazon's "Good Girls Revolt" lets us know how far we haven't come 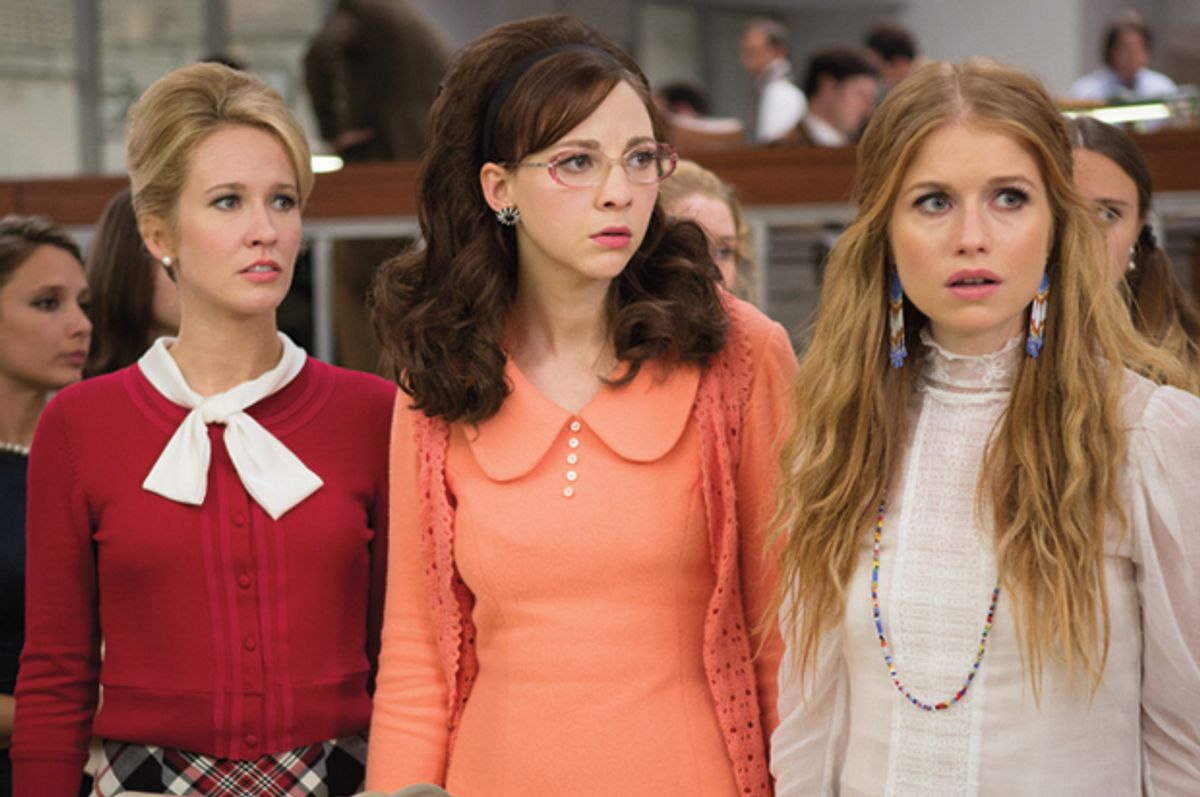 Someday in the distant future, a generation of women yet to be born will look back on 2016 and be horrified at the level of open misogyny that their ancestors contended with. That nearly 100 years after women won the right to vote, their basic worth as humans was still being questioned by politicians and Internet trolls. That a female co-host at a major news network, Gretchen Carlson, sued her boss for sexual harassment, which led to his firing and her winning a $20 million settlement.

As Lynn Povich’s book “The Good Girls Revolt” chronicled, Newsweek kept women out of writing, reporting and editing positions and paid them far less than their male co-workers. But the suit didn’t merely call attention to the vicious irony of a publication rising in prominence for covering cultural shifts in the 1960s but failing to honor the civil rights of its female employees. It also emboldened women at other media outlets to follow their example, sending shock waves across the industry.

Some 46 years after that moment, it is still considered revolutionary for a female front-runner in a presidential race  – the nation's very first — to openly align herself with feminist issues in a nationally televised debate.

“Good Girls Revolt,” currently available for streaming on Amazon Prime, includes some of the issues touted by Hillary Clinton, including equal pay and support for working mothers, as one would expect of a story told from the perspective of these particular working women. The female researchers at News of the Week, the drama’s fictional stand-in for Newsweek, exist in the liminal headspace between an era when they were expected to put the roles of wife and mother ahead of career intentions and the women’s liberation of the late 1960s and '70s.

When one alpha male manager declares to a female would-be reporter in front of the staff, “girls do not do rewrites,” it’s irritating and insulting on multiple levels.

Yet there’s the inescapable notion that “Good Girls Revolt” exists to fulfill a nostalgic hunger for the era that birthed “Mad Men” as opposed to a desire for a substantive look at the gender inequity. Side by side with that AMC series, “Good Girls Revolt” is fashion casually layered on top of an incredibly vital story. If it were more than that, the writers would get to the actual revolt a lot more quickly.

Instead, the script steeps in the character profiles of the News of the Week women for most of the first season’s 10 episodes. At least series creator and executive producer Dana Calvo displayed a modicum of awareness of the inevitable comparisons to “Mad Men”: None of the women in “Good Girls Revolt” specifically resemble Joan or anyone else in the Sterling Cooper & Partners secretarial pool.

News of the Week is portrayed as in direct competition with Time and sees an impending threat in Rolling Stone magazine, which, at the time, was just a young upstart. Even before the women in the office kicked the lawsuit into gear, a generational struggle rages between the younger and marginally enlightened editor at large, Finn Woodhouse (Chris Diamantopoulos) and the oldest of the old-school editors William “Wick” McFadden (Jim Belushi).

While the top goats lock horns over whether to include more takes on the nation’s burgeoning counterculture and the civil rights movement, the reporting staff scrambles to snag the best stories that might be cover contenders.

In the News of the Week offices, the women are relegated to a place they call the Pit. They’re the research assistants to the publication’s male reporters; in a number of cases they’re also their lovers, which makes the whole lawsuit business a little sticky.

Among the newest recruits, free-spirited researcher Patti Robinson (Genevieve Angelson) dreams of infusing youth-centric stories into the publication’s pages, a desire shared by her reporter partner and lover Doug Rhodes (Hunter Parrish). Since Sam Rosenberg (Daniel Eric Gold) pulls the meatiest assignments most often, his researcher Jane Hollander (Anna Camp), ends up with fairly interesting fact-checking tasks. Both Patti and Jane love their jobs, but Patti has faith that she’ll be able to write under her own byline someday. Her ambition isn’t truly inflamed until she crosses paths with a contemporary who refuses to accept News of the Week’s policy of denying women a byline – a no-nonsense writer by the name of Nora Ephron (Grace Gummer).

Gummer’s Ephron and Joy Bryant’s Eleanor Holmes Norton, the American Civil Liberties Union lawyer who represented the women, are based on real figures, blurring the lines between the show’s fictional elements and actual history. Both characters add weight and pragmatism to a stable of broad archetypes. Without the counterweights of Eleanor helping the women stay on track, they’d be flimsy protagonists. And minus the determined Ephron reminding Patti that she needs to actually write and publish to be a writer, Angelson’s hippie act would quickly lose its sparkle.

“Good Girls Revolt” also lacks poetic dialogue or seductive atmosphere but compensates for those shortcomings with sex scenes that are utilized to highlight strained marriages like Finn’s, whose wife is sick of his unrepentant addiction to work. A lack of sex, meanwhile, defines the stale home life of mousy researcher Cindy Reston (Erin Darke), the classic pre-feminist wife burdened with a controlling husband. Her storyline is a barely a slap and a tumble removed from a Lifetime Movie Network film.

In spite of how all of that reads, the salvation of “Good Girls” is the charisma of its performers, even if one sees shades of, say, Peggy Olson and Penny Lane of “Almost Famous”-fame in Angelson’s Patti. There’s also a lot to enjoy in the snail’s paced awakening of Camp’s Jane, a rich daddy’s girl raised to be a virgin at her wedding and maintain her waistline. Even Darke’s work evokes empathy and warmth for Cindy.

Analyzing how closely Gummer’s and Bryant’s serviceable portrayals mirror the personalities of their real-life counterparts is mostly pointless, since “Good Girls Revolt” is more a period piece revolving around sexual entanglements and personal charm than a meticulous exploration of history or civics.  Looking at the show thusly makes it embraceable as a pop culture trinket, as the network “Mad Men” clones, ABC’s “Pan Am” and NBC’s abysmal “Playboy Club,” each aspired to be in 2011.

Fortunately “Good Girls Revolt” has enough distance from the real thing to slake the residual thirsts of anyone needing more visuals of girdles, bullet bras and bouffant hairdos in her life. As rearview vistas go, this one is a pretty eyeful, designed to entertain more than inspire gratitude at how far we’ve come. Or maybe that just how its scenery looks from right here and right now.