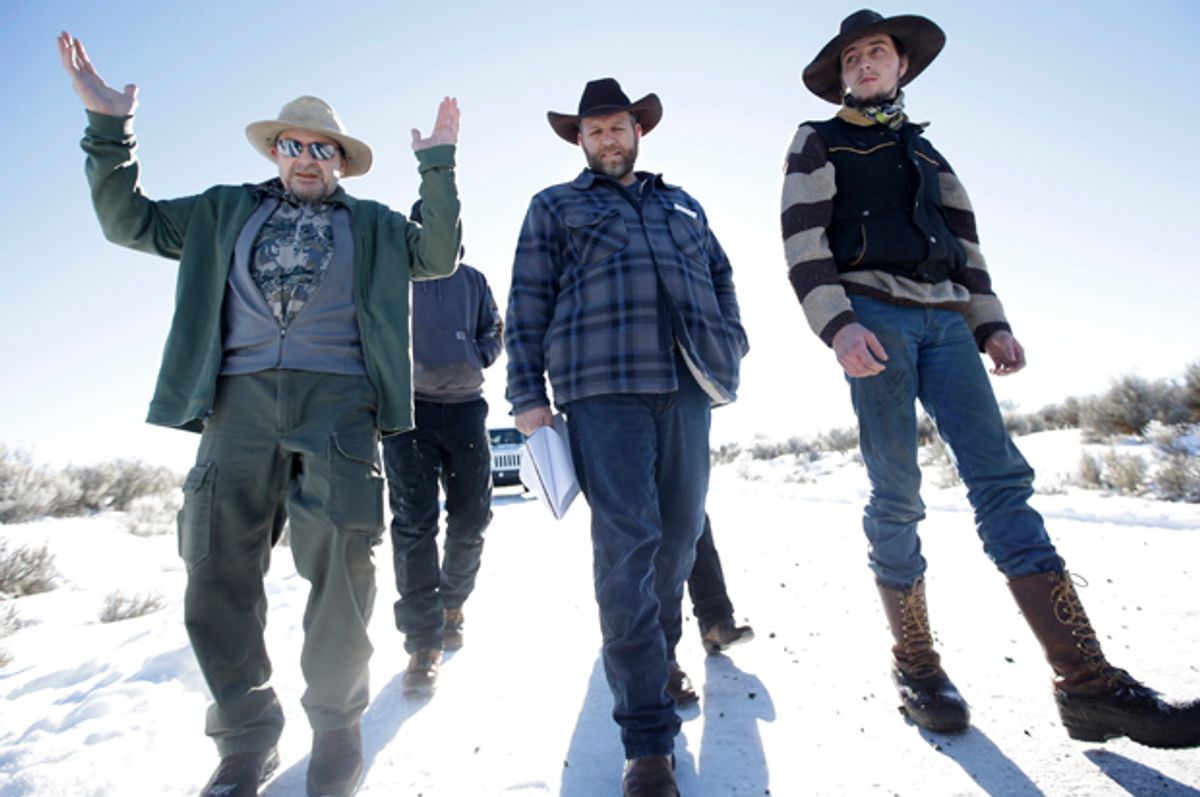 During the 2016 election season, Donald Trump’s rise and run for the White House has drowned out numerous important news events. One such neglected news story is the trial of Ammon Bundy, his brother Ryan and five other confederates who took over a federal wildlife preserve in Oregon last winter.

The group was arrested in February after a six-week-long occupation of the Malheur Wildlife Refuge during which they defiled Native American artifacts and burial grounds, broke into a federal facility and threatened police and other officials with assault rifles and other weapons. At the end of the siege, LaVoy Finicum, the spokesman for Bundy’s militants, was shot and killed by an FBI agent after pointing a gun at him.

Despite the overwhelming evidence against the Bundy militants, on Thursday a federal jury in Portland acquitted them of federal weapons and conspiracy charges. This shocked many observers. It should not have.

Black Americans and other people of color often talk about how there is one legal system for “them” and another for “us."

As the social-media hashtag #CrimingWhileWhite signals, there is a dual system of justice in the United States of America. One exists for white people — especially white conservatives and other members of the right wing — and a separate one for people of color and Muslims. This is white privilege weaponized through the law.

This fact is readily exposed by asking basic questions and through clear observations and reason.

Consider: What if Ammon and Ryan Bundy were Muslims? Would their group be described as “terrorists” or as the much more benign and folksy “militia members"? Would the jury have found a compelling defense in Ammon Bundy’s explanation that his religious beliefs inspired him to take over the federal land at Malheur Wildlife Refuge — especially in a country that is not supposed to be a theocracy?

Members of the Standing Rock Sioux tribe have been peacefully protesting against Energy Transfer Partners and its efforts to build a pipeline on their sacred land. This oil pipeline is an environmental hazard that will despoil the land and water. Police and mercenaries have beaten, maced and otherwise assaulted peaceful, unarmed protesters, in addition to dispatching dogs on them.

Black adults and children who have toy guns in their hands are routinely shot and killed by America’s police. Yet, white men (and women) who are armed with real guns can brandish them in the street and even go so far as to point their weapons at police without being killed or otherwise harmed. Again, why is this?

Ultimately, in the United States white people can point guns at police and federal authorities with relative impunity. Black and brown people who are unarmed do not have such latitude. They are dispatched with lethal force after being presumed a “threat” by police who are “in fear of their lives.” It would seem in America that melanin is death while whiteness is life.

Thursday’s acquittal of the Bundy militants, by an all-white jury, is a de facto endorsement of political violence by conservatives and other members of the American right-wing against the United States government. This decision comes at a very perilous moment in American life.

The FBI and other law enforcement agencies have categorized the so-called sovereign citizen and broader Christian right-wing militia movement (of which the Bundy militants are part of) as being a greater threat to America’s domestic security than Islamic terrorists.

The Guardian newspaper, as well as organizations such as the Southern Poverty Law Center, have also identified the right-wing militia and sovereign citizen movements as being a threat to local order and government in areas across the rural parts of the United States.

Donald Trump has told his supporters to intimidate and harass black and brown voters in America’s “inner cities” on Election Day. As reported by The Washington Post, white right-wing militia groups such as the Oath Keepers are planning to following through on his commands:

Amid growing concerns about possible violence and vote fraud on Election Day, the Oath Keepers, a national group of former military and law enforcement officers, has urged its members to “blend in” with voters and do “incognito intelligence gathering and crime spotting” at polling places across the country on Nov.

“In particular, we are calling on our retired police officers, our military intelligence veterans, and our Special Warfare veterans (who are well trained in covert observation and intelligence gathering) to take the lead,” group leader Stewart Rhodes said in a “call to action” on the group’s website and in a YouTube video urging members to “help stop voter fraud.”

The Oath Keepers are officially nonpartisan, but their concerns clearly echo Republican presidential nominee Donald Trump’s warnings about a “rigged” election and his calls for his supporters to monitor polling places for evidence of fraud by supporters of Democratic rival Hillary Clinton.

The Oath Keepers have a history of provocative and threatening action against police and other law enforcement agents. The Washington Post continued:

Heavily armed Oath Keepers have participated in several high-profile actions in the past couple of years, most notably guarding buildings in Ferguson, Mo., following the 2014 police shooting death of Michael Brown.

The group also participated in an armed confrontation with federal officials in 2014 in Nevada over rancher Cliven Bundy’s refusal to pay fees to graze his cattle on federal land. It also sent armed members to 2015 standoffs against federal authorities in Oregon and Montana in disputes over mining rights on federal land.

As I have explained in an earlier Salon piece, if there is political violence in the United States on Election Day or thereafter, such an outcome will not be the result of one singular event. A jury’s decision to acquit the right-wing domestic terrorists Ammon and Ryan Bundy and their cabal is but one more step in a long march toward the next Timothy McVeigh.

A storm is coming. Are we prepared? And will those who have summoned it — such as Trump and the right-wing media — be held properly responsible for the harm and chaos they have inspired?