Don’t get weird, OK? Let new comedy "People of Earth" take you to a better place 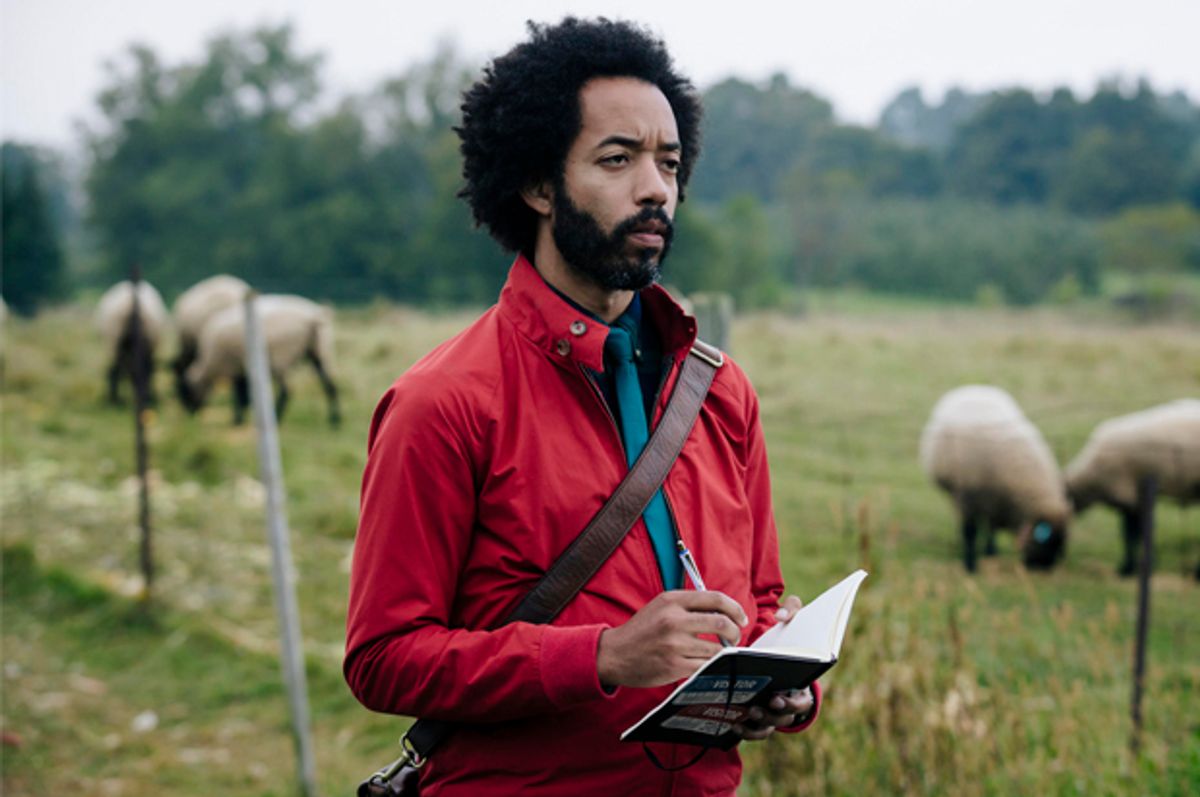 TBS’ “People of Earth,” an ensemble comedy that follows a support group of alien abductees, sounds like the kind of simplistic disposable sitcom that basic cable used to be known for — scripted half hours riddled with obvious humor that aim squarely for the middle.

The new show's concept itself is a bit of an eyebrow raiser in that it asks viewers to find laughs in the blending of a dour setting with a population that many actively dismiss. And once we get past the weirdness of the various abduction accounts, where else is there to go?

The answer is — to the stars, or at least into outer orbit.

“People of Earth” succeeds with a combination of a strong ensemble cast led by Wyatt Cenac and Ana Gasteyer, a sweet tonality throughout that blends tragedy and eccentric humor, and an endearing plot arc that very quickly extends beyond the community room of Our Lady of Sorrows Catholic Church in a small town called Beacon, where the abductees meet.

Simple as it would be for series creator David Jenkins to populate the cast with caricatures, his comedy mindfully humanizes each character, uniting members of the support group StarCrossed under the healing banner of belief as opposed to spelunking into the depths of separateness.

That seems to be the key preventing “People of Earth” from falling into the trap that killed off NBC’s “Go On,” an ensemble comedy featuring Matthew Perry that followed a grief support group. Despair is a turnoff for sitcom seekers, even if a show is well-written and anchored by a major star.

Each person in StarCrossed has burdens to bear, mind you, but “People of Earth” frames them in the context of struggling with a mystery as opposed to wrestling with sadness, creating a remarkably lighter atmosphere right off the bat.

Under the guidance of executive producer Greg Daniels, who shepherded the American version of “The Office” into greatness, Jenkins expediently establishes “People of Earth” as a true ensemble comedy. That is, each character is richly drawn and exists on his or her own individual strengths as opposed to simply orbiting the central characters. Daniels also helped Jenkins hire a top-shelf cast, including “Office” alumnus Oscar Nunez, who plays the resident priest at Our Lady of Sorrows.

Cenac is the star here, without question, and he maintains his signature arid wit and restrained affect even as he slowly builds out the bizarre side of his character the skeptical Ozzie Graham. Gasteyer, too, makes the most of the opportunity she’s afforded in this comedy, notably in an upcoming episode that shows how and why her character Gina Morrison, a former psychologist, relocated to a town known for having the highest number of alien encounters on the East Coast.

Carefully crafted performances balance the hilarity with notes of trauma lurking within, adding a winning sincerity to “People of Earth.” These are people whose lives haven’t stopped but who can’t quite move forward without knowing for certain that what happened to them was real.

As the group’s leader, Gina seems reasonable enough, as do a number of its members, save for the group’s self-proclaimed “alientologist,” pothead Gerry (Luka Jones), and a business owner, Richard (Brian Huskey), who blames the aliens for everything that’s gone wrong in his life. These “experiencers,” as they call themselves, claim to each have had an encounter that began with “Don’t get weird, OK?” and ended with an alien remarking upon his or her specialness.

“There’s dickery afoot in Beacon!” one of the abductees exclaims. “Alien dickery!”

Who would believe them? Certainly not Ozzie, a New York City reporter assigned to write an article about the Beacon-based group for Glint Enterprises. Ozzie is a serious journalist with an enthusiastic idiot of a boss, Jonathan Walsh (Michael Cassidy), who has relegated Ozzie to what the reporter derisively refers to as “the tinfoil hat beat” as he recovers from hitting a deer with his car.

Truth be told, the accident has left Ozzie with residual effects, in that he dreams about that deer quite a bit. It talks to him and appears at odd times, often out of context.

This is part of the reason that Ozzie can’t completely dismiss the bizarre similarities of the StarCrossed members’ individual accounts, although their descriptions of the aliens in question are quite different. Some claim to have been taken by green, lizard-like beings called reptilians and others by a shorter, dome-headed variety known as Greys.

Two of the women, a housewife named Chelsea (Tracee Chimo) and Kelly, a single millennial (Alice Wetterlund), claim to have been seduced by a third variety likened to a “tall, handsome Ryan Gosling.” Another woman in the group, Yvonne (Da’Vine Joy Randolph) feels cheated by her more perfunctory experience — although she’s more irritated that her encounter made her part of this weirdo circus. Rounding out the tribe is Margaret (Nancy Lenehan), somewhat of an oddball in this very strange group.

Again, no characters have tangible evidence that their abductions actually happened. The twist, revealed in numerous commercials leading up to the series, is that they really did and the perpetrators do not possess an intelligence that’s much greater than our own.

The aliens are as petty and bureaucratic as we are, in fact, as demonstrated by the impatient, sarcastic Jeff the Grey (Ken Hall), who can barely tolerate working with the handsome Don the White (Björn Gustafsson), a sensitive being who resembles a Tolkien elf, dismissed by Don and his co-workers as a useless himbo.

TBS is premiering the first two episodes of “People of Earth” back-to-back tonight beginning at 9 p.m., which, given the first episode’s incredibly funny reveal, is a smart move. The first episode feels intentionally heightened, as if to sell us on the show’s friendly weirdness, and the final scene is bound leave viewers with questions. It’s also the marker in the road where a person may choose to exit.

Dishing up a few answers right away is the smarter move; our patience for new series is a lot shorter these days, and audiences need a sound reason to stick with a show. But in a new TV season that’s thin on the adventurous and the peculiar, this is a show that deserves to be noticed — and welcomed.