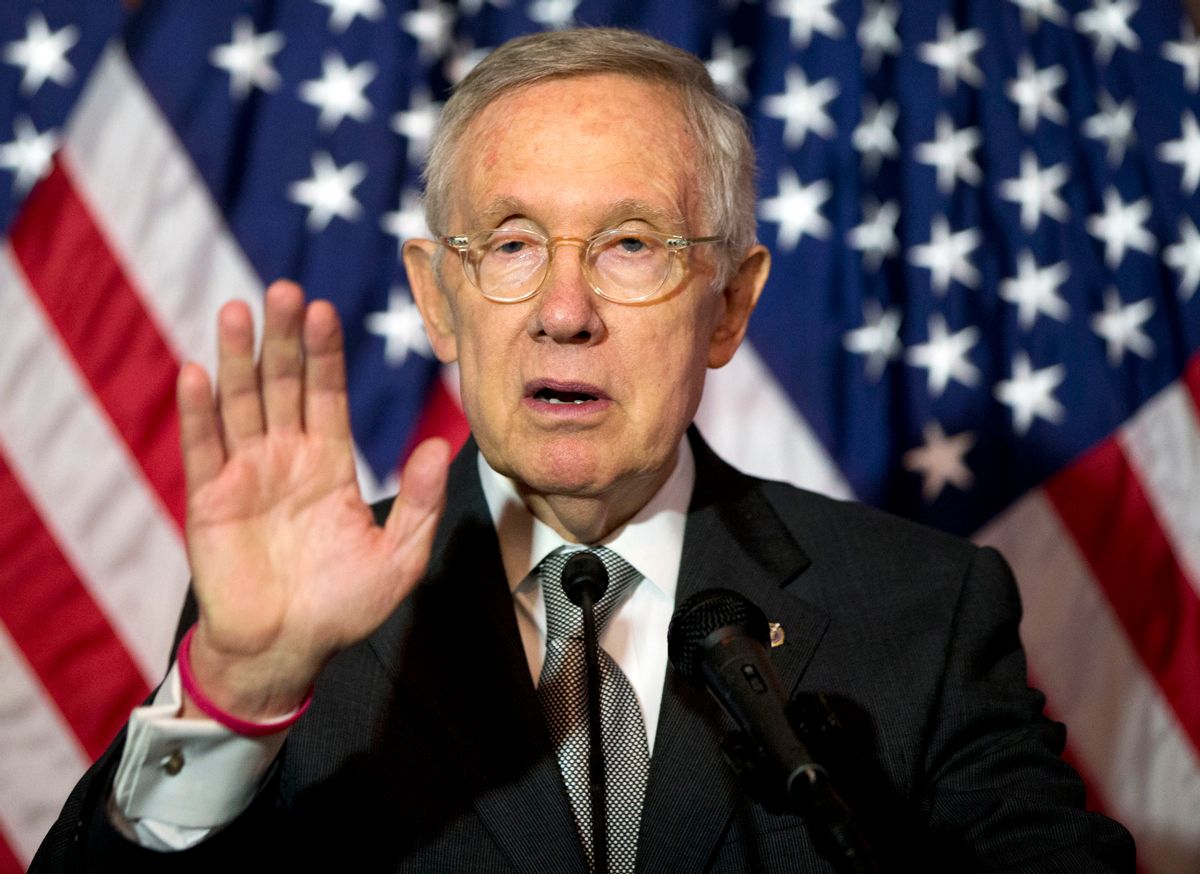 In this June 9, 2016, photo, Senate Minority Leader Harry Reid of Nev., speaks during a news conference on Capitol Hill in Washington. (AP)
--

Senate Minority Leader Harry Reid (D-Nevada) has publicly accused James Comey of breaking the law, charging in a letter sent on Sunday that the FBI director violated federal statutes that prohibit government officials from using their authority to influence an election.

"Your actions in recent months have demonstrated a disturbing double standard for the treatment of sensitive information, with what appears to be a clear intent to aid one political party over another," Reid argued. "I am writing to inform you that my office has determined that these actions may violate the Hatch Act, which bars FBI officials from using their official authority to influence an election. Through your partisan actions, you may have broken the law."

Although the FBI announced that it was investigating new Clinton emails on Friday, CNN discovered on Sunday that law enforcement officials were aware of the emails weeks earlier. This has raised questions as to why the FBI chose to wait until less than a fortnight before Election Day to disclose their existence, as opposed to revealing them right away or waiting until after election season had subsided.

The Hatch Act, which was passed in 1938, states that federal employees may not "use [their] official authority or influence for the purpose of interfering with or affecting the result of an election." The law has been upheld twice by the Supreme Court, which distinguishes between First Amendment rights to free speech and a federal official using his or her office to deliberately influence the results of an election. It has also been repeatedly amended, with the last amendment occurring in 2012.

Reid isn't alone in criticizing Comey for violating the Hatch Act. In a Sunday editorial for The New York Times, Republican lawyer Richard W. Painter, former chief White House ethics lawyer under George W. Bush, wrote that "absent extraordinary circumstances that might justify it, a public communication about a pending F.B.I. investigation involving a candidate that is made on the eve of an election is thus very likely to be a violation of the Hatch Act and a misuse of an official position."

Although Reid's accusation that Comey broke the law was the highlight of his letter, it has been criticized for containing another serious charge.

"In my communications with you and other top officials in the national security community, it has become clear that you possess explosive information about close ties and coordination between Donald Trump, his top advisors, and the Russian government — a foreign interest openly hostile to the United States, which Trump praises at every opportunity," Reid wrote. "The public has a right to know this information. I wrote to you months ago calling for this information to be released to the public. There is no danger to American interests from releasing it. And yet, you continue to resist calls to inform the public of this critical information."

Because Reid has refused to provide additional information about his allegation, The Washington Post described this latter charge as "the political equivalent of Reid lighting a match, dropping it on dry ground and walking away."