“Inferno” isn’t a box office disaster: Dan Brown’s overseas hit may be the future of movies, whether we like it or not

"Inferno" is flopping in the U.S., but overseas is another story — one that leads to increasingly generic movies 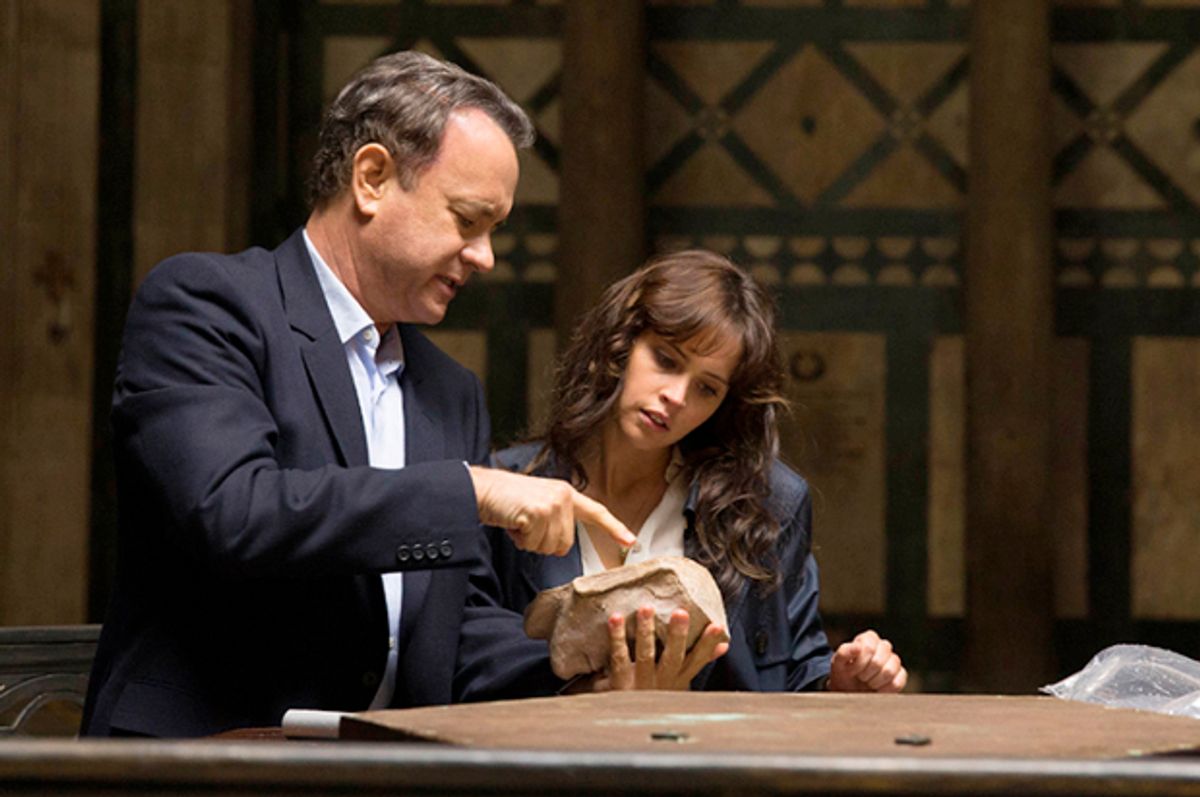 “Inferno” went up in flames during its first weekend in release. Starring Tom Hanks and Felicity Jones, the third adaptation of Dan Brown’s Robert Langdon series bowed to an anemic $15 million in theaters. Projections show it on track to tap out with about $48 million domestically — a far cry from the blockbuster $217.5 million that “The Da Vinci Code” grossed in U.S. theaters in 2006.

This has been an extremely slow fall at the box office. “Inferno” is just one of a string of domestic underperformers —including “The Girl on the Train,” “Jack Reacher: Never Go Back,” “Storks” and “Deepwater Horizon.”

The latter, a disaster flick about the 2010 BP oil spill in the Gulf of Mexico, had blockbuster written all over it. “Deepwater Horizon” stars Mark Wahlberg, one of the most reliable draws in Hollywood. Earning surprisingly strong reviews, the film also reunites him with his “Lone Survivor” director, Peter Berg. Their previous collaboration was a surprise smash — its $125 million gross boosting January 2013 to record numbers. “Deepwater Horizon,” though, has made just $58 million to date.

“Inferno” might seem to be just another certified flop in a year that has been burdened by so many, but Columbia Pictures has an ace up its sleeve: Ron Howard’s movie is cleaning up abroad. It has, thus far, made $132 million outside the U.S., the biggest international launch of the season to date. “Inferno,” which posits that Dante Alighieri's vision of hell was a prophecy not fiction has been open overseas for weeks. Given the film’s modest $75 million price tag, what could have been a financial disaster will make back its money in a matter of days. (Note: Most projects have to earn twice their production budget to recoup costs.)

This year could be the biggest ever for the international box office, not in earnings but in weight. While “Star Wars: The Force Awakens” carried the global box office to an earth-shattering $40 billion last year, overseas markets have never had more impact on a film’s overall fortunes. In 1990, just half of the year’s 20 highest-grossing movies made a majority of their box office earnings abroad.

This year, all of them did. Increasing foreign revenue speaks to a future in which the U.S. film market holds diminished importance — which could have a huge impact not only on how movies are marketed but also on what kinds of movies are made. It’s great news if you hate talky comedies and love big-budget blockbusters with white people in them — but potentially bad news for the state of moviegoing as we know it.

If “Inferno” didn’t need American audiences to become a hit, neither did “Perfume: Story of a Murderer.” Tom Tykwer’s critically divisive 2006 adaptation of an 1985 novel about a serial killer with a heightened sense of smell decided to forego the U.S. market, receiving an extremely modest release domestically. Despite shelling out one of the largest budgets in history for a European film ($65 million), Paramount sensed that there wasn’t a demand for it in the U.S. Whether that was true, the film made $135 million anyway.

That might have seemed like a huge gamble for Paramount ten years ago, when flopping in the U.S. could make or break film franchises. But today the domestic market is a drop in the bucket. In 2015 studios earned 73 percent of their profits abroad, and that figure is expected to only increase this year, one in which foreign grosses have proved to be a crucial lifeline for ailing franchises.

September’s “Bridget Jones’s Baby” maxed out with $24 million in the U.S. That’s by far the lowest total in the series. The Sharon Maguire-directed film, however, earned $149 million abroad, which included $56 million in the U.K. “Now You See Me 2” and “Warcraft,” both viewed as major duds in the U.S., earned 81 percent and 89 percent of their grosses overseas, respectively.

While the U.S. has suffered through one of the biggest box-office lulls in recent memory, countries like China and Russia are experiencing record returns.

This has been a breakout year for Chinese film — with homegrown blockbusters like “The Mermaid” and “Monster Hunt” grossing nearly a billion dollars combined. That’s largely due to increased investment from the country’s government. So far in 2016 the number of movie screens shot up 40 percent, increasing to 32,000. By 2018, China’s box office revenue is expected to overtake the U.S. for the first time.

Because of the erosion of DVD sales in the U.S., Hollywood studios have had no choice but to continue pumping money into foreign markets to further that development. Most recently, that has included countries like Argentina, Colombia and Brazil, as chains like Cinemark have expanded to South America. Currently, the film company operates 173 theaters on the continent and is expected to roll out more.

It’s a good bet, as rising incomes in Latin American nations have increased consumer spending. In 2008, just nine movies grossed more than $10 million dollars in Brazil. So far this year, 17 hit that mark. Eight years ago, just four movies made more than $5 million in Argentina. In 2016, 11 have done so, and four movies even topped $10 million.

American comedies rarely translate in Russia, although the Ruskies love Jason Statham, and a particularly bloody shoot-'em-up flick is likely to get slapped with the equivalent of an NC-17 in France. While Nicolas Winding Refn’s hyper-violent “Drive” earned the country’s harshest rating, “Shame,” which features full-frontal nudity, was a PG-13 movie.

Catering to those peccadillos often leads to an overabundance of caution, as well as playing to the middle. That means that studios are more likely to green-light projects viewed as “universal,” ones that deal with subjects and themes familiar to foreign viewers. When the Oscar-winning “12 Years a Slave” opened in Italy, its star, Chiwetel Ejiofor, was eclipsed on the film’s posters by his white co-stars — Brad Pitt, Michael Fassbender and Benedict Cumberbatch. The film’s European distributors thought that they would connect better with potential ticket buyers. When the civil rights dramedy “The Help” played in Sweden and Denmark, it was rebranded as “Niceville” to play down its racial subject matter.

These decisions are also based in an old Hollywood myth that black actors don’t sell to foreign audiences. That, of course, isn’t true. “Furious 7,” whose ensemble cast features Vin Diesel, Chris “Ludacris” Bridges and Tyrese Gibson, made $1.5 billion worldwide. Seventy-seven percent of those grosses came from countries like Germany, South Korea, Russia and Thailand, where its predominantly black and brown cast might be considered to be a liability. In China, the film grossed $390 million, even more than it did in the U.S. Nonetheless, movies like “Ride Along” and “The Best Man Holiday” are rarely distributed abroad.

Some have argued that factoring in these myriad tastes is a boon to cinema. “You have to start taking in other cultures and things that they value and how they view the world and incorporate that into your storytelling,” Caleb Pinkett, who was a producer on “After Earth,” told the BBC in 2014.

But rather than increasing the complexity of Hollywood product, thinking globally has led to paying shallow lip service to major markets. “Independence Day: Resurgence” appealed to China by casting Angelababy, a popular actress and singer, as one of the fighter pilots trying to prevent aliens destroying the earth. “Transformers: Age of Extinction” went even further with its setting part of the film in the Asian country, even though this made little sense for the narrative.

Worse yet, the emphasis on foreign markets often prizes noise and spectacle over narrative. Although the “Transformers” films have experienced diminishing returns in the U.S., the series has stayed extremely popular around the world precisely because watching robots fight doesn’t require much in the way of translation, unlike your latest Judd Apatow comedy.

The billion-dollar grosser, which earned 78 percent of its final sum outside the States, exemplifies all the worst trends of globalized filmmaking: It's a film that’s so culturally nonspecific that it amounts to almost nothing. It might as well be extremely expensive background noise.

“Inferno” will likely be viewed as a disaster in a year where every month witnesses its own box office Hindenburg go up in flames. Dan Brown’s latest tale of white people saving the world from biblical menace is receiving brutal reviews, and its poor reception may spell doom for the decade-old franchise. It might be the end for Robert Langdon, but unfortunately for Hollywood, it’s just the beginning.