The Clinton BS Files: Hillary is not building a New World Order out to destroy the white man

Behind the myth of the New World Order, the right wing's ur-conspiracy theory from which a thousand flowers bloom 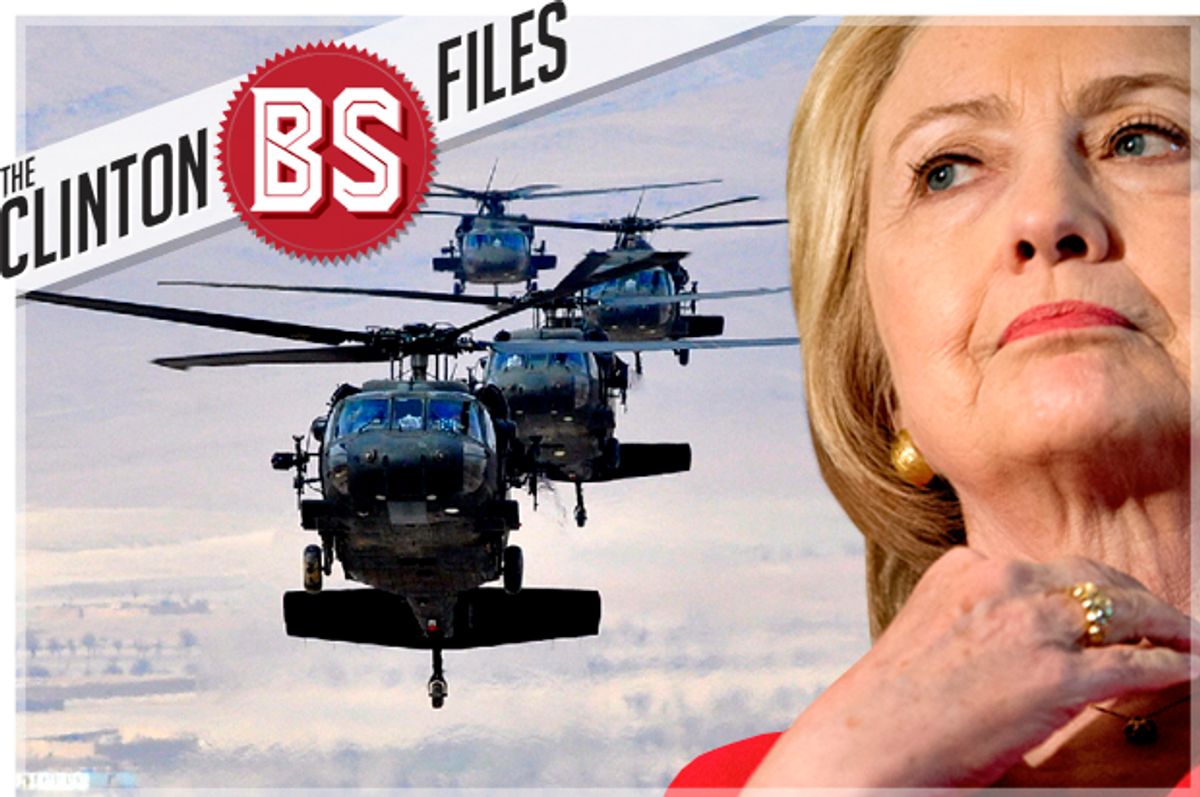 Back in August, Hillary Clinton went on Jimmy Kimmel's show and opened a pickle jar. The whole bit was meant to send up the conspiracy theorists — including Donald Trump, her Republican opponent — who were spreading rumors that she's hiding some serious illness.

But conspiracy theorists are a notoriously humorless lot. Alex Jones, the radio host who has been at the forefront of pushing ugly rumors about Clinton's health, didn't seem to get it was a comedy bit. So he floated another conspiracy theory, accusing the Kimmel staff of faking the results of what he mistook for a valid medical test.

Kimmel did what late-night hosts do, and responded by making fun of Jones: "If you're ever feeling bad about about your job, just remember there's a grown man who spent a full seven minutes yelling about me and a pickle jar on television."

Jones, in turn, responded by alleging that Kimmel is part of a worldwide conspiracy that has designs to murder Jones.

"To have Kimmel and others sit there and wave a gun around on TV and say this is a threat from the New World Order to you, Alex Jones," Jones ranted on his radio show, "they know it's seen as comic relief by their viewers, but it's not comic relief, because it's being directed by the Clintons."

It always comes back to the New World Order.

Nearly every wealthy person and world leader, as well as most Hollywood stars and basically anyone who scoffs at conspiracy theorists, is assumed to be in on the conspiracy, though exceptions are made for both Trump and Russian president Vladimir Putin, who are seen as victims of the conspiracy and not as conspirators themselves. But in the eyes of the conspiracy theorists, Bill and Hillary Clinton are clearly in the top echelon of those who secretly control the world, using levers of power that are much greater than, say, simply holding an office like the presidency or the secretary of state.

Variations of the New World Order conspiracy theory have been around for ages, but during the '90s, under Bill Clinton, there was a dramatic ramp-up of paranoia in right wing circles. Conspiracy theorists and talk radio hosts started pushing this notion that Clinton was gearing up for some dramatic government takeover of people's lives, one where jackbooted thugs kicked in your door, gathered up all your guns and ... well, it was never quite clear what happened next, but the part where your guns were taken away was clearly supposed to be terrifying.

One of the dominant pieces of "evidence" for this supposedly impending doom was the existence of black helicopters. Paranoid conservatives across the country reported seeing these black helicopters everywhere, and the assumption was that they were gathering intel for the impending government takeover.

The beauty of this particular conspiracy theory is that most of us do see black helicopters flying around some of the time, due to black being a standard color for helicopters. These helicopters, like other vehicles such as planes and cars, are mainly used to move people around, but their very ubiquity made them the perfect prop for stoking a constant sense of fear and paranoia.

During Clinton's first term, a series of paramilitary groups that styled themselves as militias training to resist the New World Order takeover started up around the country, and they quickly ingratiated themselves with some of the nuttier Republicans in Congress, who saw a clear political advantage in stoking conspiracy theories about President Clinton.

The Oklahoma City bombing in 1995 drew attention to these unsavory associations. Timothy McVeigh, the man who blew up the Alfred P. Murrah Federal Building, had immersed himself in the New World Order conspiracy theories, the same ones that were fueling the rise of the militia movement.

Timothy Egan of the New York Times reported on the link between these militias, which frequently had white supremacist leanings, and some members of Congress, like Rep. Helen Chenoweth:

The fall 1994 catalogue of the Militia of Montana sells manuals on how to make bombs, tapes explaining a conspiracy of one-world government and a video of a speech by Helen Chenoweth, delivered before she became Idaho's newest member of Congress.

The tape is advertised as one in which "newly elected Congresswoman Helen Chenoweth" explains how more than 50 percent of the United States is now under "the control of the New World Order."

After McVeigh was motivated by language like Chenoweth's to murder 168 people, the congresswoman did some backpedaling, claiming that the video was being used without permission. But it's clear that she was in deep with the militias and their conspiracy theories. After militiamen kept pushing urban legends about black helicopters, Chenoweth pandered hard, putting out a press release in 1995 criticizing the federal government for "unwarranted invasion of private land" with black helicopters.

Chenoweth wasn't the only one. Multiple congressmen and two senators, Larry Craig of Idaho and Lauch Faircloth of North Carolina, sent letters to the Justice Department demanding answers to questions about black helicopters -- questions that were being faxed to them from militia groups.

Over time, the term "black helicopters" drifted into a being a shorthand joke used by non-paranoid people to mock the right-wingers who live in terror of the New World Order's ever-impending-but-never-arriving jackbooted takeover. Because of this, the conspiracy-theory right often pretends like they were never really that worried about helicopters, even going so far as to imply that liberals made up that whole "black helicopter" thing to make conservatives look bad.

"Then, on October 7 she tried to use sarcasm and innuendo to disarm one of the greatest obstacles she’ll face in enacting such controls -- namely, the five million member strong NRA," sneers the writer Awr Hawkins. The reader is clearly meant to believe Clinton is just making shit up to make right-wingers look bad.

The problem is that Hawkins invokes the New World Order conspiracy theory in the very same piece.

"Ironically, it was less than a week ago that 'the president' suggested it may be time to step beyond mere gun control and consider gun confiscation," he writes.

(By 'the president', Hawkins means President Obama, but as a conspiracy theorist, he doesn't buy that Obama is the legally elected head of state.)

Of course, simply excising the chatter about "black helicopters" does not offer the protection against being seen as nutty conspiracy theorists that Hawkins and his compatriots clearly hope it does. The body of the New World Order conspiracy theory remains intact, even if the ancillary details are adjusted: the belief that our democratic leaders are installed by shadowy elites instead of duly elected, the fear of gun confiscation, the belief that impending doom is right around the corner. Switching the language from "black helicopters" to "Jade Helm" does not make this any less of a nutjob conspiracy theory.

This is far from the only language tweak designed to throw people off. The idea that Hillary Clinton has been empowered by the New World Order to manipulate events to her liking has gone completely mainstream this election cycle. Most conspiracy theorists know well enough to avoid the term "New World Order" these days. But that's certainly what people like Trump are implying when they argue that the election is somehow being "rigged" by a conspiracy that incorporates the media, the government, the Democratic Party and probably a bunch of house elves as well.

Still, the old language creeps into the discourse from time to time, often from surprising sources. In September, when conspiracy theories about Clinton's health were at top volume — due to her bout with walking pneumonia — Adam Carolla, a notoriously unfunny comedian who loves Trump and hates Clinton, rolled out the phrase "New World Order" on his podcast.

"I tried to get -- all this Hillary Clinton and all the pneumonia and all this stuff, I thought lets get Drew [Pinsky] to call in and just tell us how pneumonia works, what we should be looking out for," Carolla ranted. "Here's the New World Order -- it may exist, it may not exist -- but whether it actually exists or doesn't exist, in Drew's mind he cannot come on this podcast and speak about Hillary Clinton even in a hypothetical way."

Carolla went on to suggest that Pinsky, a TV doctor he has worked with on and off for years, is worried that Clinton will personally arrange to destroy his career if he speculates about her health.

Of course, Pinsky did speculate about Clinton's health publicly in August and was fired from his job hosting a call-in show on HLN for it. That probably did not happen because Hillary Clinton and the New World Order engineered it, but because it's unethical and unprofessional for a physician to speculate about the health of a patient he hasn't examined, especially when he's clearly doing it for political reasons and not because of an authentic concern.

It's not hard to analyze the roots of this belief in the New World Order. It's shared mostly by people who are far from disempowered, but instead — like Chenoweth, Carolla, Pinsky and Jones — have quite a bit of power in the world, by virtue of race and class privilege. Their resentment is fueled by the perception that white men are no longer ruling America with the death grip that they used to, and that they have to share power with women and people of color.

But it's deeply unpleasant to think of oneself as a tyrant who is tantruming at the thought of having to treat others more fairly. What the New World Order conspiracy theory does is recast the oppressors in the role of the oppressed, letting them imagine that while it may appear that white men hold most of the power, in reality the world is run by an invisible conspiracy that is actually serving to capture and control white conservatives, especially the men.

The race-and-gender paranoia that underpins this conspiracy theory can sometimes be deeply buried, but it does surface on occasion.

"It's the white, Anglo-Saxon male that's endangered today," Chenoweth told journalists during her 1994 run for Congress. Egan, in reporting this comment, noted drily that her district "has a population that is about 95 percent white."