What will happen when Mosul falls?

The Islamic State may be doomed, but that hardly means peace for Iraq 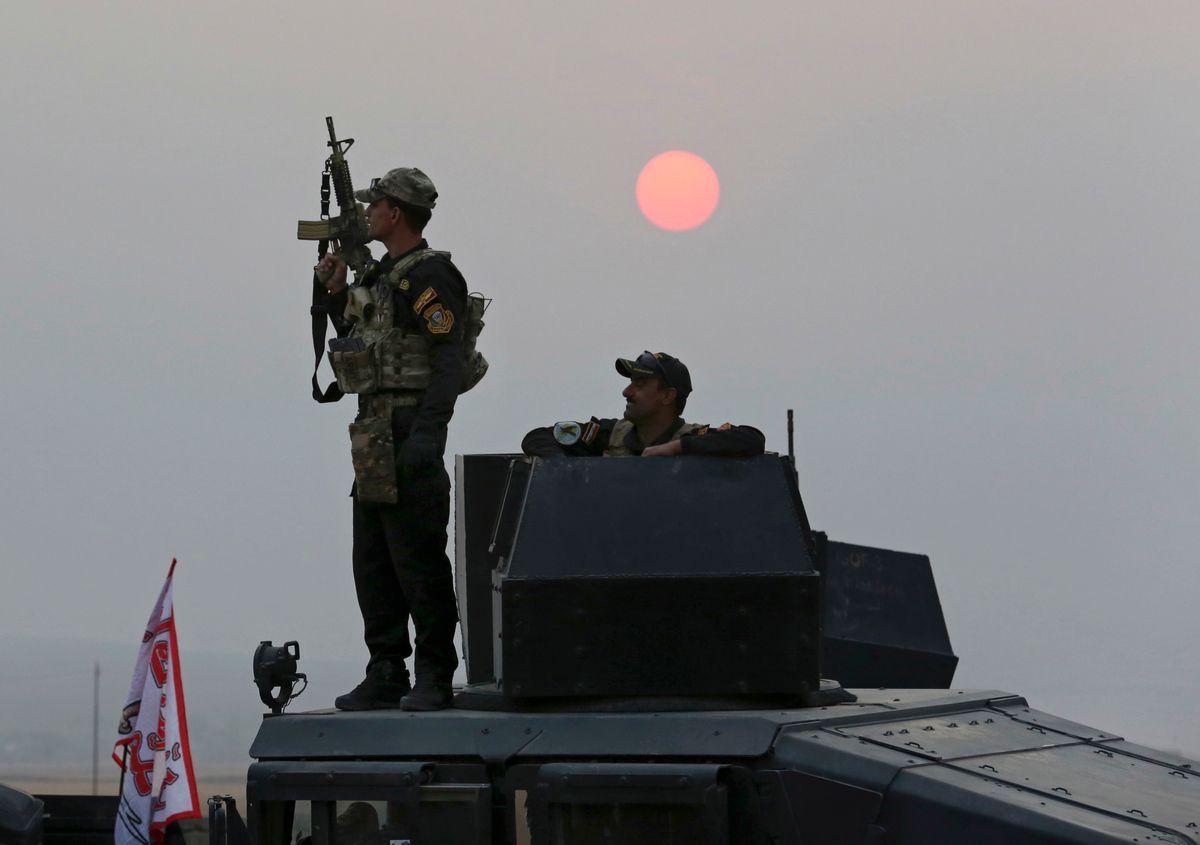 Iraq's elite counterterrorism forces advance toward Islamic State positions as fighting to retake the extremist-held city of Mosul enters its second week, in the village of Tob Zawa, outside Mosul, Monday, Oct. 24, 2016. A convoy of special forces advanced toward the village of Tob Zawa, Monday, encountering roadside bombs and trading heavy fire with the militants.(AP Photo/Khalid Mohammed) (AP)
--

There are some 100,000 troops involved in the conquest (or reconquest, depending on your perspective) of Mosul.  On the surface, the battle is meant to restore the Iraqi government to its full writ; a Baghdad-united Shi’a and Sunni realm, a nation-state on the way to functionality.  In other words, a normal country.

Careful observation reveals a more wretched future.  The Islamic State may be doomed, but that hardly means peace for Iraq.  There are too many who want a piece of this particular pie.

Many players there are.  Let’s start with the greatest of powers, who define the broadest outlines of geopolitics in the Middle East.

The Americans: the wary sponsor

The United States has focused much of its geopolitical energy on Iraq for over 25 years now, starting with sending half a million troops to fight the first Gulf War and continuing up to the war against the Islamic State today.  Under Saddam Hussein, Iraq was the most developed and powerful Arab state in the 1970s and 80s, and so it made a lot of sense for the Americans to focus a great deal of energy on it.  When Iraq stopped being useful and began to act like a regional imperial power, the United States shifted from winning over Iraq to containing and eventually overwhelming it.

Once the U.S. invaded in 2003, American policy hoped, rather naively, to remake Iraq into a 21st century post-Nazi Germany.  When it became clear that was never going to happen, the U.S. decided to retrench, keeping Iraqi democracy on life support and Iraq intact, while reserving the ability to rush back into Iraq should a rival power try to take advantage.  The Obama administration seemed to believe that Iraq could slowly reorder itself on its own while U.S. power kept Iranian and Russian influence to a minimum.

That didn’t take into account the reality that Shi’a Iraq was busy getting revenge on Sunni Iraq for decades of brutalization.  Led by Nouri al-Maliki, Shi’a Iraq gutted Iraqi institutions to try to turn them into reliable Shi’a bastions. Years of American training went out of the window; faith in the state collapsed.

Then the Syrian civil war opened geopolitical space for some kind of Sunni supremacist force to organize and attack from Syria.  Which is precisely what the Islamic State did, conquering Mosul was nary a shot and banging on the gates of Baghdad.

But after 8 years of expensive, largely pointless occupation, the United States did not want to deploy legions back to Mesopotamia.  When the Islamic State conquered Mosul in June 2014, Russia had already annexed Crimea and begun its invasion of Ukraine; America simply couldn’t afford to throw tens of thousands of troops back into the fray.  Instead, America funneled enough arms, money, and advisers to keep the Baghdad government alive, demanding in exchange that Nouri al-Maliki slink off to the sectarian shadow.

This remains the calculation today.  Believing that Iraq as a whole can be controlled by no one but Iraqis, the Americans continue their light touch approach.  They do not try to shut down Iranian influence, nor to prevent the emergence of a Russian penetration, because they believe that both will fail as completely to control Iraq as they have.  They see Iraq as a job of damage control.

As the most powerful of states with force in Iraq, this matters.  So long as the Americans were committed to trying to control the country, no one else could gain much traction; even the Iranian-sponsored Shi’a militias were corralled to neighborhoods rather than cities.  But now that the U.S. believes it should only hold Iraq’s borders together, opportunities for others have arisen.

The Iranians vs. the Saudis: the Islamic Cold Warriors

The battle of Mosul should also be seen in the context of the cold war between Iran and Saudi Arabia.  Saudi Arabia prefers a Baghdad government that is less sectarian and protects the Sunnis; Iran prefers it to be more heavily Shi’a.  Saudi Arabia fears stepping on America’s toes in Iraq, so its touch is very light: it gives quiet support to Sunni political parties.  Ironically, for such an anti-democratic kingdom, Saudi Arabia’s best way forward is through a strong Iraqi democracy.

For the best results from Saudi Arabia’s view, professional Iraqi forces should do the heavy lifting.  These forces are less sectarian and are more likely to protect the fledging democracy, which protects Sunnis and thereby keeps Saudi Arabia in the game.

The Iranians, conversely, want the complete opposite: the sectarian regular forces and Shi’a militias leading the reconquest would be ideal.  Iran doesn’t benefit from more Iraqi democracy; they want a warped, Lebanese-style system, that holds down the violence but is ultra-manipulable.  Iran doesn’t particularly want to be sucked into trying to pacify Iraq’s many Sunnis; it simply wants them politically neutered through an inept, crony-ridden democracy.  The more the professional troops win battles, the less powerful the Iranians become, since those troops are American creatures suited best to protecting what remains of Iraqi democracy.

The Turks vs. the Kurds: the hateful neighbors

Once Turkey was the center of a grand empire that stretched across the Arab world.  That’s because Turkey, Iran, and Egypt are all the natural geopolitical great powers; left alone, one of them can rise to dominate the others.  Of course, since World War I, they haven’t been left alone, with British, American, and Russian power long meddling in their affairs.

Turkey sees the chaos in both Syria and Iraq as huge threats and potential opportunities.  The collapse of both southern neighbors are, of course, a massive security threat, but not merely because chaos on the border is often bad.  The last great Middle Eastern ethnic group without a state, the Kurds, long held under various empires, are using the chaos as an opportunity to dash for statehood and security.

And millions of them live inside Turkey.

Turkey does not want to lose that swath of territory and population; that would be a geopolitical shock as big as the collapse of the Ottoman Empire, setting Turkish power back decades.  Holding Turkish Kurdistan has long been a tough job: a murderous civil war since the 1980s has claimed tens of thousands of lives.  But at the very least, Ankara could always argue it wasn’t treating its Kurds any differently than its neighbors.

But with the collapse of Iraqi state power, Iraqi Kurdistan has emerged as the most formidable of the Iraqi factions; though still dysfunctional, it runs much better than Baghdad’s central government.  Iraqi Kurds are on the frontline to capture Mosul; should they prove themselves combat capable even more than they already have, their stock amongst Western powers seeking a ground force to wipe out the Islamic State will rise.  This would be a disaster in Turkey’s eyes; if they become seen as the only competent force on the ground, the West might allow Iraqi Kurdistan to secede from Iraq.

And that would begin the dominoes.  In Syria’s smoldering civil war, Syrian Kurds could then repeat the success of their brethren in Iraq; this is a huge reason why Turkey has invaded Syria.  Rather than overthrow Assad or the Islamic State, Turkey seeks to check Syrian Kurds.

Hence the reason why the Turkish army has actually long been in Iraq as well,though not quite in the style of an invasion.  These forces arrived shortly after the collapse of Mosul to the Islamic State.  Turkish interests in northern Iraq vary, but they are centered around remaining a potent player in the struggle for Iraq.  Iran, though it too has Kurds, has been happy to stoke anti-Turkish sentiment amongst the Kurds as a way to throw the Turks off balance.

Thus the Turks seek boots on the ground that let them have a say in the day after.  The Iraqi government is still too dysfunctional to oust them; as a NATO ally, the U.S. can’t either.  And so long as Turkish goals are merely to slow down Kurdish secessionism, something the U.S. on paper still doesn’t support, the Turks may well get what they want.

Finally, the wildcard: the Russians.

Though the Russians are not directly involved in the battle for Mosul, Moscow is keen to show it is a viable alternative for the Iraqis.  The Americans believe the Russians already are developing contacts in Baghdad itself, functioning as a shadow sponsor the way the British have shadow governments.  Much like a UK shadow cabinet, such a cell would act as replacement for the main Iraqi sponsor, the United States, allowing Russian influence to rapidly take advantage of American mistakes or disinterest.

This is one reason the Americans have been willing, despite Obama’s campaign pledges, to send soldiers back to Iraq.

This is key to Putin’s continuing geopolitical strategy: take advantage of American mistakes and replace U.S. influence with Moscow’s.  This he has done with much success in Syria; each failure of the Obama administration to appear to solve the Syrian civil war strengthens Russia’s soft power.  You can see that readily enough with the swelling ranks of Putin fanboys who adore his usage of cluster bombs on Aleppo.

So, what about that day after tomorrow?

It seems likely that the reconquest of Mosul will reveal all of Iraq’s fault lines yet again.  Iraq itself won’t suddenly transform into a normal country, nor does anyone besides the U.S. want it to.  Instead, Baghdad will have to fend off Turkish, Iranian, and Saudi influence, while getting minimal help from the Americans.  While the Iraqi flag will fly in Mosul, who’s will go right below it?  That, time will tell.