Different rules for the Donald: An unfair set of standards apply only to Hillary Clinton, the #TBT (TimeBeforeTrump) candidate 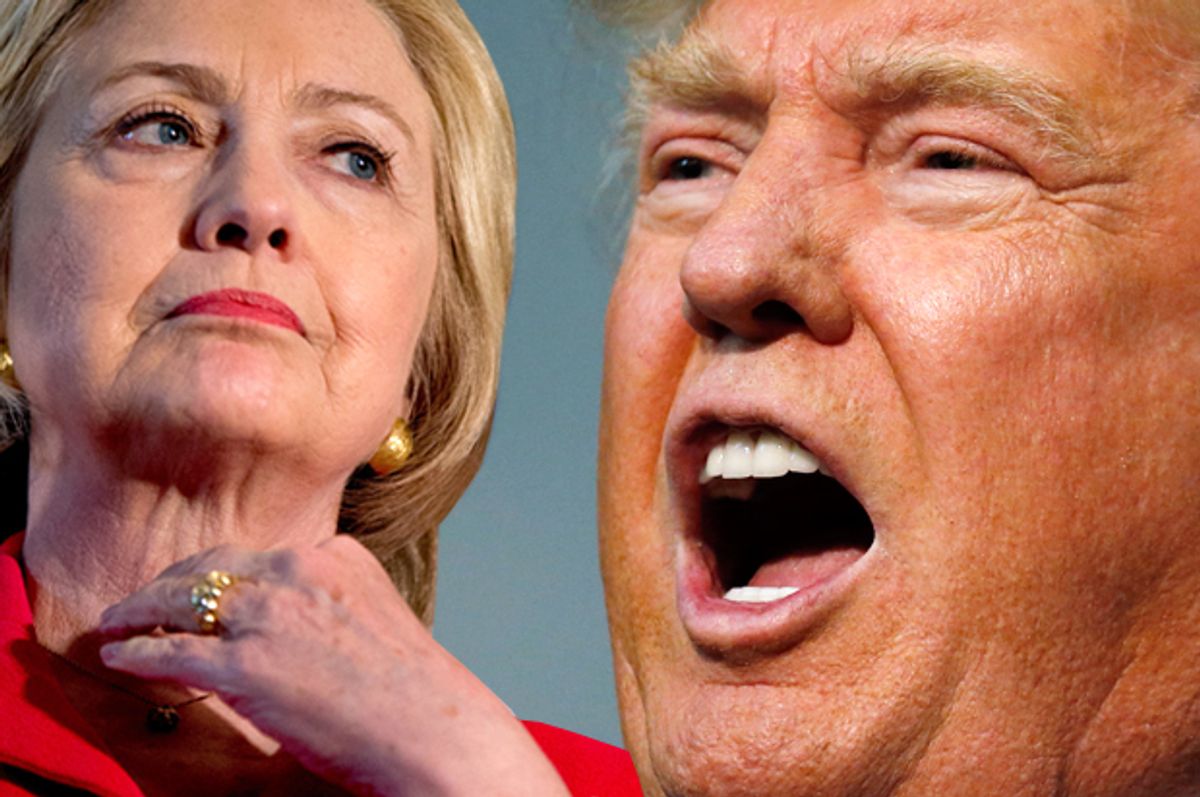 It's happening again. Last month I discussed how Democratic presidential nominee Hillary Clinton is being unfairly evaluated based on pre-2016 rules for presidential politics, while her rival Donald Trump has been allowed to reject the old rules in favor of his own.

Even worse, due to his war of attrition against decency and presidential decorum, too many American voters have accepted Trump's parameters. In other words, Trump has been given significantly wider latitude than anyone else who's ever run for president, and there's still a chance he could win because of it.

Yet Clinton is, more than ever, the #TBT (or TimeBeforeTrump) candidate, a throwback to an era of campaigning when a modicum accountability was expected. Meanwhile, there is no such expectation for Trump.

The letter of  James Comey, the FBI director, regarding the discovery of additional emails related to Clinton's term as secretary of state illustrates the point. Trump has been allowed to get away with practically hundreds of grievous trespasses that would have doomed all other presidential campaigns. Yet this letter, which contained almost no specifics and which might turn up exactly nothing, appears to be precipitously shrinking Clinton's lead in early tracking polls. And it doesn't make any sense whatsoever.

Even before Comey's letter dropped, and in the absence of any major Trump bombshells, his numbers were improving, just as they did in the weeks before the first debate. You might recall how the polling margins widened due to Trump's unforgivable remarks about the Khan family, followed by a slow narrowing to a point when Trump nearly took the lead.

And then he attacked Alicia Machado for a week, widening the margins again. New York magazine reported on Monday that former campaign chairman Paul Manafort had recommended to Trump that he maintain a low profile following the conventions because Manafort had forecasted, as long as Trump is the focus, he loses.

As we all observed, this exact phenomenon came to pass. When there aren't any negative Trump stories, he eventually climbs to within a point or two of Clinton in the polls, if not taking the lead. But when he blurts out horrendous things, his numbers drop.

The question is, Why?

One conclusion could be that in this election in which the Democrat is a woman, American voters are wired to lean Republican unless there's something, an event or remark, to wave them off. But even those negative stories tend to be only temporarily damaging, chiefly because voters seem to be suffering from a warped sense of right and wrong — a sickness that pollutes their judgment

According to a new Morning Consult and Politico poll, voters said that the ongoing sexual assault allegations against Trump, as well as his series of racially insensitive remarks, are only 3 points more egregious than Clinton's email imbroglio.

So, it's inexplicably a wash. American voters seriously believe that Clinton's emails, a story that many can't even explain, is just as horrendous as 1) Trump bragging on video about grabbing the genitals of numerous women and counting, 2) Trump fat shaming and slut shaming a beauty pageant contestant on Twitter, 3) Trump admitting on video that he likes to invade the dressing room area of the Miss Teen USA pageants in order to ogle naked 14-year-old girls, 4) Trump, on two occasions, telling girls as young as 10, that he'd be dating them in a few years, and all of this has come to light just in the past month alone.

Fold into the mix the fact that Trump is facing a civil trial on accusations that he raped a 13-year-old girl, and his poll numbers somehow just 3 points worse than Clinton's damn emails? And by the way, the latest story has nothing to do with her "home brew" server, since the computer in question doesn't belong to her. Nor did Comey imply there was any wrongdoing. Nor did Comey reveal how many emails are copies of what the bureau already possesses. Nor did Comey say that any emails were sent by Clinton herself. Nothing. The extent of the story was we have emails. That's it.

Meanwhile, in the face of all of Trump's formerly disqualifying negatives, voters see Clinton has more unfavorable than Trump, according to the new ABC News and Washington Post poll. I'd wager that most of the voters who think Clinton is worse than Trump can't even fully explain why. Actually, strike that; they probably could explain, but it's likely they don't want to tell pollsters they hate Clinton because she's a strong, smart woman who plays politics better than most men.

The fact that she's a powerful woman could be the smoking gun here. Trump's most horrendous scandals have, for the most part, involved subjugating and assaulting women, which too many Americans see as merely "locker-room talk." Voters clearly see this as less damning than a woman who . . . what? Had her own email server in her house, even though Rep. Trey Gowdy's GOP-led Benghazi committee, the FBI itself, as well as probes by the Senate Homeland Security Committee, the Senate Judiciary Committee and the inspector general of the intelligence community found nothing illegal?

Put another way, in this election American voters see a sexual molester of women as a bit more favorable than an actual woman. The sexual predator is being exonerated by the same people who think Clinton is guilty, even though Clinton has been exonerated for both her email usage and Benghazi, for that matter, by numerous Republican investigations.

Again, just one of the bombshell revelations about Trump would have destroyed the campaigns of almost literally any other candidate, Republican or Democrat. And yet Trump will still manage to sashay through Election Day with victories in roughly 24 states or more. This might be logistically possible for a consummately skilled politician who knows how to navigate the news media, while also running an airtight ground game with a robust get-out-the-vote strategy similar to surgical precinct targeting of President Barack Obama's 2012 effort. But he's not.

In addition to his scandals, Trump's campaign is FUBAR and he routinely acts out like a whiny, entitled dilettante, blurting statements that fall well outside the realm of acceptably intelligent discourse, not to mention outside the strictures of what we consider to be presidential decorum. But Clinton had a thing with her emails, so voters are beginning to once again lean toward the diapered circus peanut.

Indeed, and to repeat, the race was tightening even before Comey rammed his note into the proceedings. That's what's happening in the polls right now and it's absolutely confounding.

The race shouldn't be this close. Based on the old pre-2016 rules, Clinton would be leading by electoral vote margins closer to her husband's 1996 map, knowing that Trump might be the most damaging, least qualified berzerker-in-chief character to step onto the presidential stage.

The fact that he's perfectly acceptable to 40 percent of us shows that too many Americans have lost their minds. Maybe it's the disinformation campaigns bombarding AM talk radio, Fox News and the alt-right internet.

Or maybe it's the social media bubbles we're each cultivating whereby we're able to aggregate versions of the facts that conform to both our biases and personal branding. It's difficult to know for sure, and it's not exclusively a Trump thing. There are more than a few leftists who steadfastly refuse to vote for Clinton, perhaps in order to save face against pro-Hillary followers. Regardless, we've careened headfirst into a era in which traditionally agreed-upon facts and rules are mostly irrelevant, and it could give us President Trump.