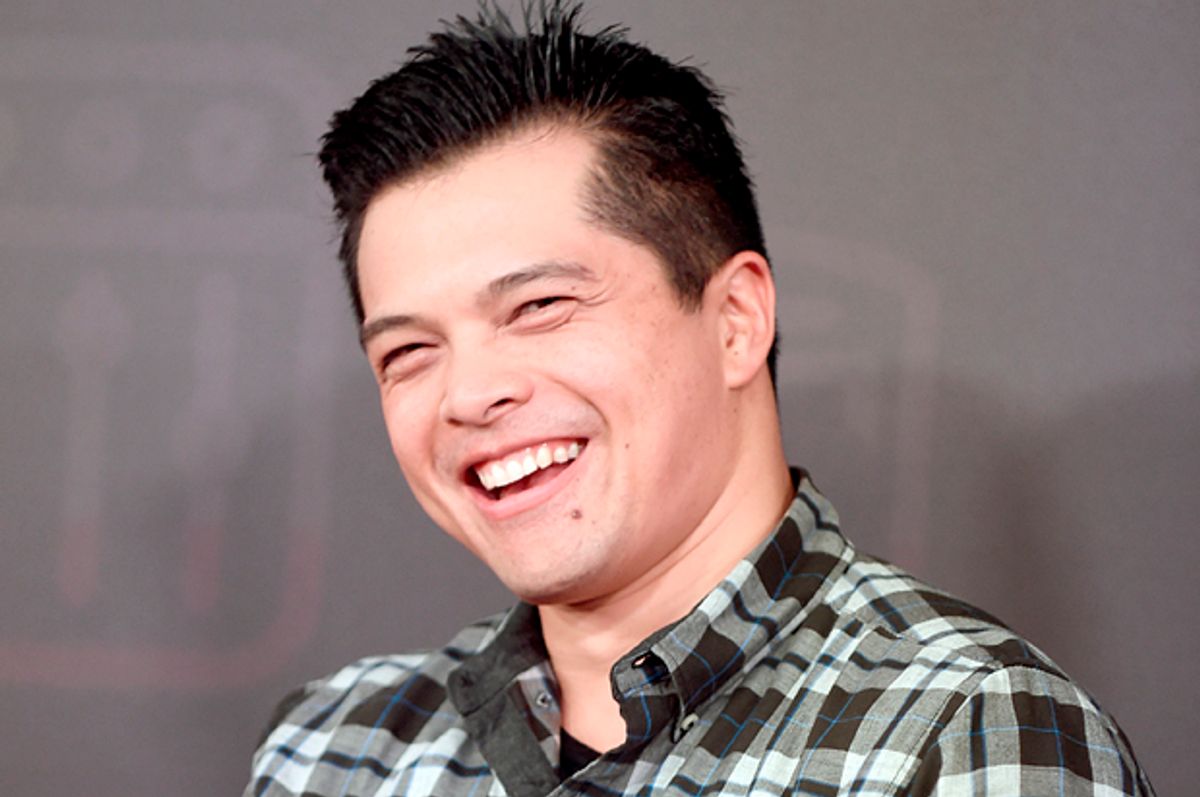 There was a big present for fans of the CW’s “Crazy Ex-Girlfriend” in yesterday’s Out 100 list. Every year, the gay publication puts out a yearly guide to “who’s who” in the LGBT community, and this installment included Vincent Rodriguez III, who plays Josh Chan on the critically acclaimed musical comedy. Rodriguez is married to Gregory Wright, an aspiring voiceover artist. In August the couple celebrated their one-year anniversary at Disneyland, generating some blink-and-you’ll-miss-it headlines in gay blogs.

The revelation that Josh Chan is played by an out gay man will likely be news to viewers of the show. (Hey, it was for this viewer.) On “Crazy Ex-Girlfriend,” Rodriguez’s character is straight. Josh is the simple but sweet “Asian bro” who loves hanging with his dudes, drinking and going to the beach, which is just four short hours by car away. More important, though, he’s also the show’s romantic lead.

Rebecca Bunch (Rachel Bloom) runs into Josh, her old boyfriend from summer camp, during a depressive spell. She has a great job at a New York law firm, where she’s about to be promoted to partner, but Josh represents the one thing she doesn’t have: happiness. Their chance meeting inspires her to move to West Covina, California, which just happens to be where Josh lives, as she repeatedly reminds everyone around her.

“Crazy Ex-Girlfriend” has been applauded for upending stereotypes about Asian men, who are rarely allowed to be heartthrobs or love interests. As a Filipino man, Josh is more likely to be portrayed like Long Duk Dong in John Hughes’ “Sixteen Candles,” a wacky object of amusement, than the hot guy next door. Dong speaks in an affected Chinese accent and doesn’t know what quiche is. Every time his name is spoken, a gong is heard over the soundtrack (à la horses whinnying in protest of Frau Blücher in “Young Frankenstein”).

It’s just as rare, however, for a gay or bisexual man to play a romantic lead on television. While Portia de Rossi and Neil Patrick Harris have portrayed heterosexual characters on “Arrested Development” and “How I Met Your Mother,” there’s an element of camp in their performances. The fact that the audience knows that the actors are both out and married to members of the same sex is part of the joke, especially given the aggressive metrosexual masculinity of Harris’ Barney Stinson.

For lack of a better term, “Crazy Ex-Girlfriend” plays it straight — asking us to truly believe that Rebecca could fall for this man without even the faintest hint of irony. Given the hugely positive response to Rodriguez’s Jake Ryan-esque heartthrob, the gambit appears to have worked.

His groundbreaking casting is a stunning rebuke to the long-standing belief that queer actors simply cannot play straight — because the audience won’t take them seriously. After “Will and Grace” actor Sean Hayes was cast opposite Kristin Chenoweth in the Broadway revival of “Promises, Promises,” Newsweek’s Ramin Setoodeh infamously wrote that the openly gay star was too “queeny” for the part. “Hayes is among Hollywood’s best verbal slapstickers,” Setoodeh commented, “but his sexual orientation is part of who he is, and also part of his charm.”

While the backlash to his comments singled out Setoodeh as representing a backward way of thinking that is dying out in Hollywood, the truth is he’s not alone. During a 2014 interview with the U.K.’s The Daily Telegraph, “My Best Friend’s Wedding” actor Rupert Everett urged gay actors to stay in the closet, arguing that coming out would destroy their career.

“There’s only a certain amount of mileage you can make, as a young pretender, as a leading man, as a homosexual,” Everett said. “There just isn’t very far you can go.” Matt Damon agreed. In 2015, Mr. Jason Bourne himself told The Guardian that “your sexuality [is] one of the mysteries that you should be able to play” as an actor.

When straight actors do play gay, the audience is asked to suspend its disbelief. Charlize Theron won an Oscar for portraying lesbian serial killer Aileen Wuornos in 2003's “Monster,” the actress’ magazine-perfect face hidden under “ugly” prosthetics to make the audience believe she could be a homely queer murderess.

Actor Eddie Redmayne received a great deal of criticism for playing transgender painter Lili Elbe in “The Danish Girl,” and he argued that transformation, the act of becoming another person, is merely part of the process. “Look, I’ve just played a man in his 50s with motor neuron disease,” he claimed. “I’m acting.”

It’s not that queer actors can’t do heterosexual roles justice; it’s that they are too rarely allowed to do so. Hollywood is an extremely risk-averse place, where any decision that's not based on a tried-and-true model of success is likely to be nixed. Because gay actors have not traditionally played James Bond or Superman, it means they’re less likely to be considered for those parts in the future.

That forces LGBT talent into a bind: You’re too gay to play a straight person and losing the handful of gay roles available to straight actors like Sean Penn or James Franco. What do you have left?

This year may prove a groundbreaking one in helping to break down the door for gay actors. In addition to Vincent Rodriguez’s success on “Crazy Ex-Girlfriend,” actress Sarah Paulson won her first Emmy. Paulson absolutely slayed the competition as Marcia Clark, the prosecutor assigned to the O.J. Simpson case in “American Crime Story.” Playing a complicated woman brought down by hubris, Paulson delivered a performance that was layered and fascinating, a career best for an extremely accomplished and versatile performer.

Although Clark is straight, Paulson is not. In real life, she’s dating Holland Taylor, whom you likely know from her roles in “Two and a Half Men” and “Legally Blonde.” Prior to Taylor, Paulson was married to Cherry Jones of “24.”

The list of queer actors excelling in straight roles is formidable. Earlier this year, Lily Tomlin earned her second Emmy nomination for Netflix’s “Grace and Frankie,” in which she plays a recent divorcee whose husband left her for another man. Kristen Stewart, who is currently dating singer St. Vincent (aka Annie Clark), gave her finest performance yet as Maureen, a medium seeking to contact her dead brother in Olivier Assayas’ “Personal Shopper.” Ellen Page was likewise superb in the Sundance hit “Tallulah,” playing a drifter who kidnaps a baby.

Having openness about their personal life has only made these actors better instead of it being a handicap for them. It always felt like Kristen Stewart was hiding something in her role in "Twilight," as if a part of her being was not fully present in the performance. “Personal Shopper,” however, allows the actress — who addressed longtime speculation about her sexuality for the first time last year — to play off the androgynous aspects of her persona. Slouching her way through the film in men’s polo shirts, she’s reminiscent of a young Brando. While Everett might have claimed that coming out ruined his career, Page has said that being in the closet ruined hers. “I suffered for years because I was scared to be out,” she said in a 2014 speech. “My spirit suffered, my mental health suffered and my relationships suffered.”

One of the best shows on TV, “Crazy Ex-Girlfriend” has already proved itself a trailblazer, dealing adeptly with subjects ranging from body positivity and mental illness to biphobia. Darryl (Pete Gardner), Rachel’s boss at her new law firm, comes out to his co-workers in a Huey Lewis-inspired number where he dismantles stereotypes about male bisexuals. “It’s not a phase,” Darryl sings. “I’m not confused, not indecisive. I don’t have the gotta-choose blues.”

But in asking audiences to challenge their notions about who can play straight and why, the CW show might have quietly pulled its most groundbreaking move yet.