Why "London Calling" matters: "It’s incredibly in touch and ahead of its time for British punk" 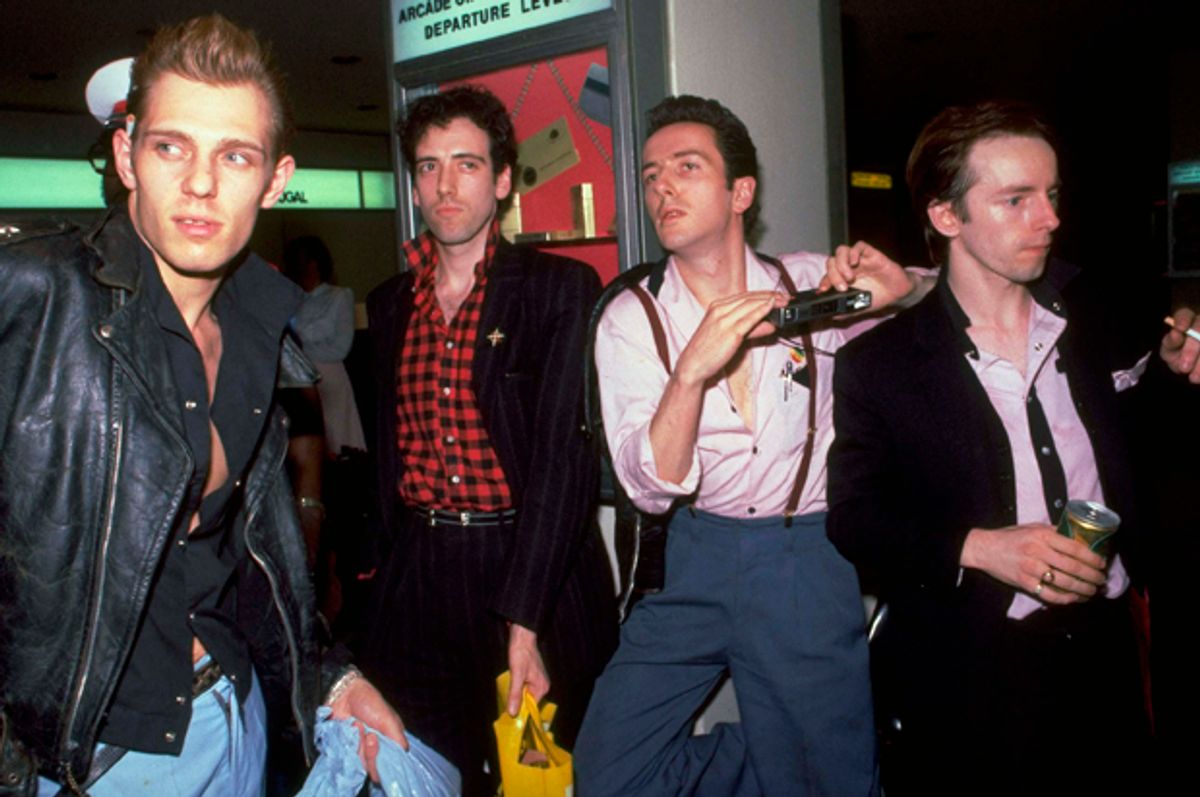 What goes into making a timeless popular song? That’s what longtime music journalist Marc Myers went looking for in 2011 when he began a Wall Street Journal column called “Anatomy of a Song.” The column has now become a book, released today and subtitled “The Oral History of 45 Iconic Hits That Changed Rock, R&B and Pop.”

The book begins by discussing Lloyd Price’s “Lawdy Miss Clawdy,” from 1952 and after working its way through songs by The Kinks, Otis Redding, Blondie and others, concludes with R.E.M.’s 1991 hit “Losing My Religion.”

The Clash song “London Calling,” the title (and leadoff) track to one of the greatest albums in rock history, appears at No. 40, near the book’s end. To understand how the 1979 song came together, Myers tracked down the band’s guitarist and songwriter Mick Jones, its bassist Paul Simonon and Clash drummer Topper Headon. (Singer and co-writer Joe Strummer and producer Guy Stevens are both deceased.)

Salon spoke to Myers, who is the author of the book “Why Jazz Happened” and the blogger behind JazzWax.com, who was at his home in New York. The interview has been lightly edited for clarity.

You’re covering a half century of musical history, with thousands of songs to draw from. Why does “London Calling” become one of your book’s crucial songs?

When it comes to the British punk movement, it’s really the national anthem. It’s the big song for a variety of reasons. Its political context, its anger, its tapestry, this ["Rule!] Britannia" feeling. But it also sounds like they’re herding cattle; there’s also a lot of energy to it. It’s incredibly in touch and ahead of its time for British punk.

So I hope I’m not the only idiot who thought this, but I always assumed that this song — from what may’ve been my favorite record in high school — was about an impending nuclear war or some related Cold War nightmare. But it was actually — when they were writing and recording the song, at least — about something very different.

So they were really ahead of the curve on global warming.

And it wasn’t just a bad winter where everything melted. There’s something going on that’s causing an imbalance, and this song is about that.

And it was also inspired by something quite literal and specific: I think their rehearsal space and maybe one of their flats was right up against the Thames.

Yeah, Joe Strummer’s apartment was right on the Thames, and he had this fear that he’d be washed away.

What’s interesting about this song as well is that this song starts with that premise, but it weaves into all this other stuff.

Was I alone in thinking the song was about nuclear war or something? Was I the only one who assumed it was about a breakdown of order and this call from the capital to the desperate citizen of the nation?

With the election of Margaret Thatcher in 1979 as the Conservative candidate, I think, you hear enormous rage at what had been and what was coming — “phony Beatlemania,” things they’re angry about. They're tired of this Britishness that keeps them from breaking free and doing something different. They’re trying to shatter the patterns of Britannia in a lot of ways.

So what did you find out about the song’s music itself that surprised or interested you? It’s a distinctive song sonically.

That was really fascinating. They capture the sounds of the BBC, “London calling, here’s the BBC; it’s 3 o’clock and here’s the news.” You get this alarmist, beeping, come-to-listen-to-what’s-going on sound.

This other aspect, which is experimentation: Mick Jones says his solo in the middle of the song is backward. I never knew that. He says after he recorded it, he turned the tape over and overdubbed it into the mix that way. It starts with this whoosh — I never could figure that out.

I didn’t know that either, but it does have a Beatles ’68, “Magical Mystery Tour” sound to it.

Yes, there’s a “Blue Jay Way”-ish start to it. Is it an instrument? A machine?

The other thing that’s important is the madness of Guy Stevens, the producer. He was a real catalyst to get these guys going, to put them on the edge. He knew the best music came from them when they were almost biting their nails with anxiety.

He used to say, “In this world there are two Phil Spectors, and I’m one of them.” He was also physical: He’d smash chairs or pour wine over their hands on the keyboard: This guy was about disrupting as much as possible. He knew the song would have a more “Wuthering Heights” quality if he was tormenting them.

Speaking of smashing things, one of the most famous parts of the “London Calling” LP is the cover, which is based on an early Elvis Presley record jacket. I think you talked to Paul Simonon, the Clash’s bassist, about the photo. Where is that classic photograph of him smashing his bass taken?

They’re at the New York Palladium on 14th Street. And Simonon had anger issues. The ticking bomb went off one night. He’s looking out at the audience, and nobody’s dancing. And he doesn’t know if they’re not dancing because they think they suck or because of the security guards. So the fuse goes off. He wants to shake things up and he smashes his bass. And just at that moment, a photographer, Pennie Smith, took the photo of him doing it. The downside, of course, is that Simonon wrecks his best bass.

The best part [of the interview] is where he said that his anger is just creative frustration. I asked him, “Are you getting that under control?” And he said, “Well, I’m getting there but things do happen.”

That’s kind of built into the punk idiom, isn’t it?

Sure. It’s a great cover, and I can’t imagine the album without it. But ironically if you were going to make a list of the five angriest punk-rock records, that would not be on there. Or rather, the anger is mostly pretty intellectual and poetic: It’s not a record by the Damned; it’s not a Sex Pistols records. It’s not even the first Clash record.

That’s the thing about The Clash: They’re really in a class by themselves. They had a certain sophistication, a British sophistication: Even though they were trying to wriggle free from it, they were still who they were. The song is incredibly well layered, the message is enigmatic. And in general these guys are not just slamming things around. They’re frustrated about the fact that things aren’t happening fast enough. Their message is wake up or you're gonna get flooded.

That’s the other interesting thing about the song: The flood is a metaphor. While they’re literally worried about water filling up the Thames and flooding the city, they’re also worried about being flooded by banality, flooded by conservatism, flooded by brutal cops . . . and the only way you can get free of it is to get angry and get to high ground.

Yeah that’s interesting. In the West we’ve been using floods as metaphors at least as far back as the Old Testament . . . and maybe back to old Egypt, where the Nile flooded.

Or as recently as Sandy, in New York.

You begin with a Lloyd Price song from 1952, and end with an R.E.M. song from 1991. You had room for only 45 songs in this book: What made a song iconic and worthy of inclusion here?

Well, it’s twofold. I wanted to do cool songs. I didn’t want to do obvious songs. “Midnight Train to Georgia” is just a great, great song; it’s got Gladys Knight. It’s got everything in it. [The Rolling Stones’] “Moonlight Mile” is not a song most people know.

That’s not an obvious one but a wonderful song.

Even “Street Fighting Man” — that never did well on the charts. But it has such an energy. And I didn’t realize it until I talked to Keith, but that’s all acoustic except the electric bass.

“Magic Carpet Ride” not “Born to Be Wild.” They're the cool cousins of all the major songs.

The other answer to the question is I stop in 1991 because if this is going to be a column or a book about iconic songs, what does “iconic” mean? It means a song has to stand time’s test a bit. Maybe in 25 years nobody knows who Britney Spears is but everyone knows Adele? You just don’t know. Twenty-five years is enough time for a song to pass before it’s a classic — where people can say, “This song means something to me now; I can relate to it today.”

And with Lloyd Price — one can argue that that’s the first real rock ’n’ roll song. “Rocket 88” still has a boogie-woogie beat. [Price’s drummer] Earl Palmer found a real dry backbeat; it sort of is a first. He didn’t hear it; he came up with it. So the book is about placeholders over time.

This book was a passion of love. These people talked about these songs like they were talking about their kids. The songwriters I spoke to — whether it was Stevie Wonder or Mick Jagger or Joni [Mitchell] — they were so deep and passionate. I really felt the poetry of who they are and why they're special.