Clinton White House plus GOP Senate? It's a recipe for total disaster

Republicans' last-ditch strategy goes beyond SCOTUS shutdown to total government paralysis. And they might do it 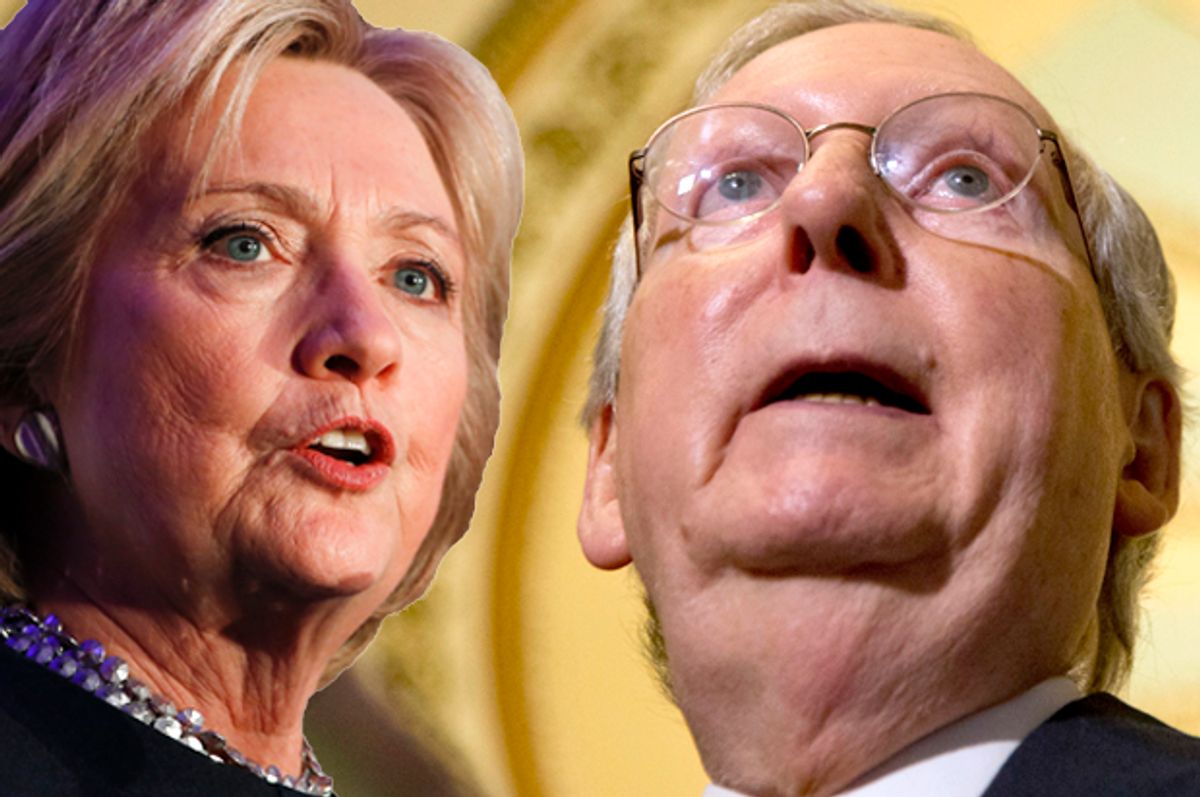 FILE - In this July 12, 2016, file photo, Senate Majority Leader Mitch McConnell of Ky. speaks during a news conference on Capitol Hill in Washington. As the Zika virus escalates into a public health crisis, members of Congress remain entrenched politically, with Republicans and Democrats pointing fingers over the failure to act as the number of mosquito-transmitted cases in the U.S. grows. (AP Photo/Manuel Balce Ceneta, File) (AP/Matt Rourke/Manuel Balce Ceneta)
--

When Justice Antonin Scalia died in his sleep at age 80 several months ago, I don't think anyone thought it would be easy to replace him before the election. President Barack Obama's appointing a justice to his seat would change the balance of the court, and that would be a fraught proposition regardless of the timing.

But it did come as a surprise when the Republicans didn't simply delay hearings or drag their feet. Instead, they openly declared that a president in his seventh year had no right to name a Supreme Court justice at all. As it has done repeatedly in recent times, the anarchistic GOP is simply making up new rules to serve its interests and daring the Democrats to do something about it.

Despite numerous sanctimonious speeches and interviews by Republicans explaining that they simply wanted to ensure that members of the public could "weigh in" on the Supreme Court choice through their presidential selection (as if they hadn't done that already by electing Obama twice) it now appears that at least a few Republicans are prepared to continue the blockade as long as a Democrat is in the White House. As Salon's Sophia Tesfaye reported yesterday, GOP Sens. Richard Burr, Ted Cruz and John McCain have all made statements to that effect.

Cruz, as usual, made the most fatuous comments, claiming that there's "historical precedent" for leaving the court short of a full nine justices for extended lengths of time. Historical is the right word. What he failed to mention was that it hasn't happened since 1844 when the court only had eight justices for two years. Burr, on the other hand, just blurted out that he thinks the seat should be left empty for four years if Democrat Hillary Clinton wins.

This is all assuming the Republicans are able to maintain their Senate majority. In the past they might have been able to achieve this epic obstruction even if they were in the minority with the use of the filibuster.

But outgoing Senate Minority Leader Harry Reid, who clearly has gotten wind of this plan, explained that he has prepared the blueprint for a Democratic majority to nuke the filibuster for Supreme Court justices if they have to: "I’ve told 'em how and I’ve done it, not just talking about it. I did it in changing the rules of the Senate. It’ll have to be done again." Added Reid: "They mess with the Supreme Court, it'll be changed just like that in my opinion."

But if the GOP fails to win the White House and maintains its Senate majority, there's a good possibility that the Republicans won't confirm any new justices appointed by Clinton, ever. Indeed, one can imagine if other justices retire or die, the court dwindling down in number for years. Keeping the Democrats from nominating Supreme Court justices is now a GOP litmus test.

And let's face it, this is a foreshadowing of something even more disruptive and dangerous. Ever since the presidency of Ronald Reagan, Republicans have increasingly seen Democratic presidents as illegitimate. They said Bill Clinton wasn't "their president" because he won with a plurality rather than a majority (which may well happen this year as well). The GOP-led Congress spent years trying to drive him from office on trumped-up charges.

Many in the Republican rank and file believed that Barack Obama was ineligible for the White House because he was a secret Muslim who had lied about being born in America. Republicans' decades-long "voter fraud" myth has created an underlying sense among their voters that our election systems are always tilted against them by Democrats' attempts to steal elections.

But this election has taken it to an entirely different level. We've never seen a presidential candidate state in advance that he believes the vote is rigged and declare that he will only accept he outcome if he wins. Even if Republican presidential nominee Donald Trump ends up conceding in some technical sense, his voters will never truly accept his loss and he will be a martyr for their cause. In that sense, Trump has already won regardless of the actual vote count.

We've also never had a presidential candidate delegitimized before the election even occurs. Trump routinely claims that Clinton should "not have been allowed" to run because  she is "guilty as hell" of unnamed crimes and has promised to imprison her if he wins the office. His followers are convinced this is true and chant "Lock her up!" and "Hang the bitch!" at his rallies. (The outrageous actions of the FBI director last Friday have made such people only more certain in that belief.)

On Tuesday night in Wisconsin, Trump declared that if Clinton wins the election "it would create an unprecedented crisis and the work of government would grind to an unbelievably inglorious halt." In fact, he and the Republicans are now making that an explicit promise. Some, like Wisconsin Sen. Ron Johnson (who faces likely defeat in his re-election battle), are actually running on that agenda. He told a local newspaper this week that he believed Clinton will be impeached should she win the office.

I would say yes, high crime or misdemeanor, I believe she is in violation of both laws [related to gathering, transmission or destruction of defense information or official government record]. She purposefully circumvented it. This was willful concealment and destruction.

Unfortunately, Johnson is not the only one already talking about impeachment:

America was a p. fun idea for awhile pic.twitter.com/0V3lyUjKQC

To hold on to their congressional majorities, Republicans should promise voters they'll impeach Hillary by 2018.

It's always possible that this is an election season bluff designed to make some people vote for Trump out of fear that the Republicans will completely shut down the government if Clinton is president. It's the kind of thuggish hostage-taking gambit in which they've come to specialize. ("Nice little country you have here. Be a shame if anything happened to it.") But it's also possible they will follow through on these threats simply because it's all they have. As Brian Beutler wrote in the New Republic:

[W]hat they’re seeking is to hold together their broken party for long enough to make another run at complete control of government in 2020. Republicans are no longer seeking any substantive ends in the interim — just the power to obstruct and the power to manufacture scandal.

The crippling of the Supreme Court is just a first step. If Republicans fail to win the White House, the destruction of Clinton will be their common purpose, the only goal that can bring them all back together.