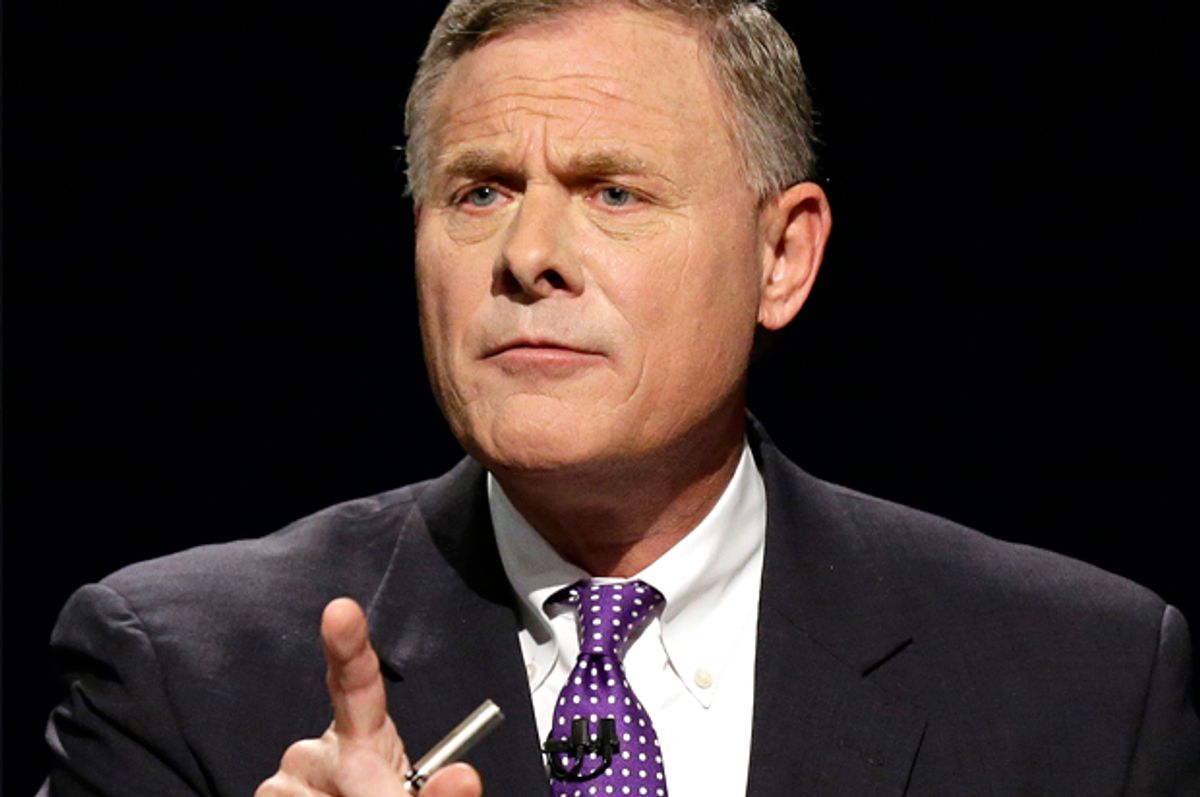 Over the weekend North Carolina Sen. Richard Burr became the latest Republican to indicate that the Senate will continue its policy of what amounts to judicial nullification by blocking any justices nominated for the Supreme Court by a Democratic president.

Speaking to a bunch of GOP volunteers at a private event, Burr promised that Merrick Garland, nominated by President Barack Obama to fill the late Antonin Scalia’s seat, will not get a confirmation vote even in the lame-duck congressional session after next week’s election. Concerning Hillary Clinton's nomination of a Scalia replacement after taking office in January, Burr said the following:

And if Hillary Clinton becomes president, I am going to do everything I can do to make sure four years from now, we still got an opening on the Supreme Court.

On Tuesday New York Times columnist and erstwhile GOP “reformicon” Ross Douthat gave perhaps the dumbest possible take on Burr’s comments. Responding to a couple of left-leaning pundits’ observation that the GOP’s position of maximalist obstruction on this issue is another way of delegitimizing any Democratic president and thus the votes of the majority of the electorate that sends him or her to the White House, Douthat suggested that Burr was merely stating that “current liberal judicial theory is inherently illegitimate.”

Ha ha ha, right. I’m sure that Burr, a conservative partisan who, prior to being elected to Congress in 1994, spent all 17 years of his adult life working as a sales manager for a distributor of lawn equipment and home heating products and doesn’t even serve on the Judiciary Committee, is genuinely concerned with the intellectual bankruptcy of current liberal judicial theory. I’m sure it has been his lifelong bête noir — well, that and defective lawn-mower fuel nozzles.

Here are a few reasons why Douthat’s comment is so insultingly silly. One, Burr is not the first Republican senator to state that the party will not allow a vote on any Supreme Court nominee to come from a Democratic president. Sens. John McCain and Ted Cruz both beat him to it days ago, without using “concern for the legitimacy of liberal judicial theory” as a reason.

Meanwhile Chuck Grassley, chairman of the Senate Judiciary Committee, has dug deep into his barrel of excuses to explain why he won’t hold confirmation hearings for Garland, and he doesn’t sound as if he’s on the same page as Douthat.

Two, Republicans have said since the day Scalia died that the American people should have a say in picking the next Supreme Court justice through the vehicle of electing the president whom they want to nominate him or her. The GOP’s own presidential nominee has made the picking of Supreme Court justices a campaign issue, particularly by taking the unprecedented step of releasing a list of conservative judges (vetted by the Heritage Foundation) from which he would pick nominees.

But now that it looks as if that next president will be a Democrat who will not submit justices preapproved by the Heritage Foundation, suddenly the GOP has decided to find another, more arcane reason to block the next nominee? Please.

Three, if “liberal judicial theory is inherently illegitimate,” I have good news for Douthat: The nominee who has been waiting 223 days for a confirmation hearing is not a liberal. Garland is in fact a moderate jurist, a former prosecutor with a bias towards the law-and-order positions beloved by conservatives. The last time a seat opened on the Supreme Court, in 2010, Republicans indicated that Garland would be a perfectly acceptable nominee. If anything, confirming him now closes the door on the possibility that Clinton might nominate a more liberal jurist during next term.

That the GOP is still refusing to do so and is talking about holding the seat open indefinitely to keep a Democratic president from filling it is pure politics.

More broadly, Burr’s comments and the reaction from Douthat, one of the more well-known GOP intellectuals working today, indicate just how deeply the partisan rot has infected the Republican Party. Douthat is part of the “reformicons,” a loose-knit group of conservatives who have spent years trying to push the GOP to change or even abandon some of its long-held positions in order to appeal to a broader range of voters. The movement has not gained a lot of traction within the party, which is drifting ever further into a politics marked mostly by spittle-flecked incoherence. But it was something that the GOP could point to in order to say that the party still had an interest in legitimate republican governance.

The problem is that when the veneer of intellectualism drops, Douthat and other reformicons are revealed as the same type of partisans they decry: obstructionist and illiberal factionalists who see nothing wrong with the delegitimization of the opposition party, no matter the results of a fair and open election. If there is no group within the GOP that has the willingness or the moral authority to drag the party away from the nihilistic stance it has adopted, then the GOP will never be capable of governing ever again.

This is a serious problem in a country more or less evenly split between two major parties. This is the sort of problem that makes the nation ungovernable and can easily lead to a constitutional crisis, if it hasn’t already.