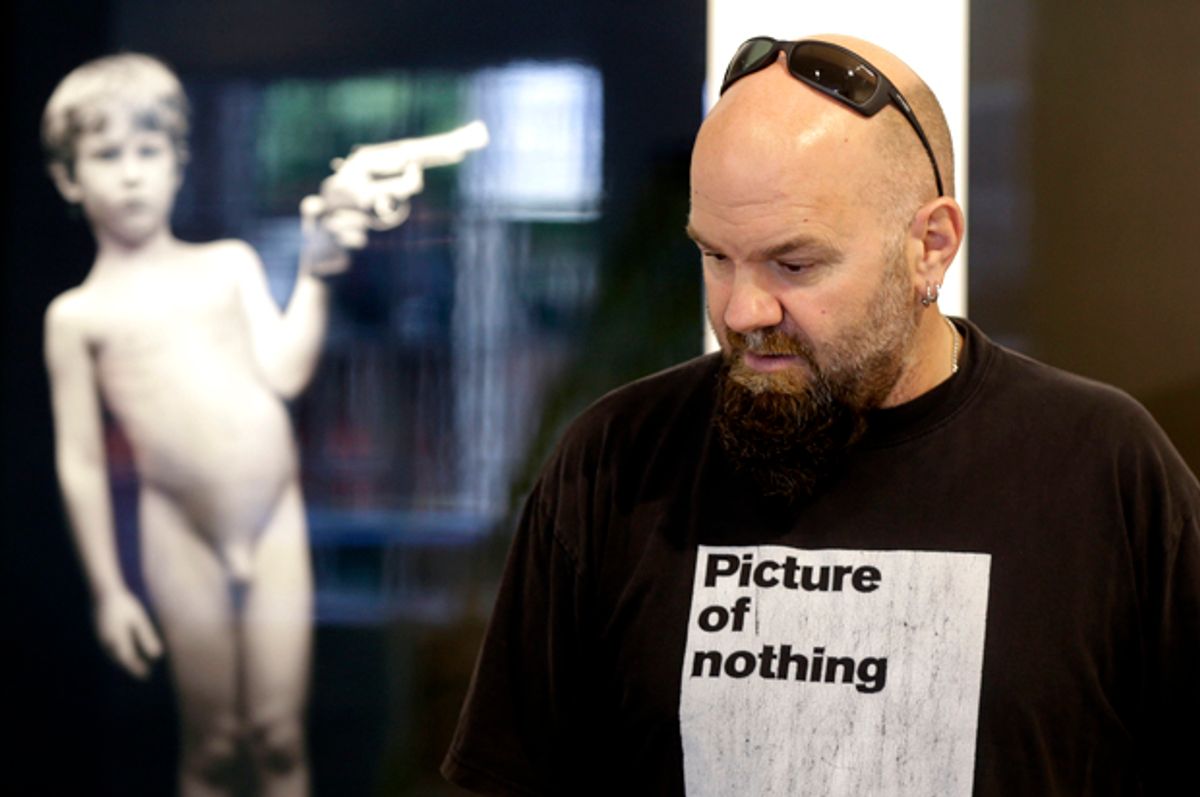 New Orleans gallery owner and exhibitor Jonathan Ferrara organized a clever art exhibit in 2014: Take decommissioned guns, give them to artists to remake into art and use the whole thing to kick-start a discussion about gun violence in America. The exhibit has now been turned into a book, "Guns in the Hands of Artists," with written contributions from a variety of people, including Democratic vice presidential nominee Tim Kaine, former congresswoman Gabby Giffords and rapper Lupe Fiasco.

I spoke with Ferrara over the phone about this project. This interview has been edited for length and clarity.

Let's start with the premise of this exhibit, which you've turned into a book. What's the idea behind "Guns in the Hands of Artists?"

So, the idea behind "Guns in the Hands of Artists" the project, the exhibition and the book is to bring the conversation into the realm of art — and art as a means for dialogue and possibly new ideas, new avenues.

This issue is so often clouded by and consumed by the vitriol that surrounds it from the polarized politicized aspects of the issue of guns and gun violence in America. So the object and the idea behind this project is to bring it into the realm of art and have artists offer their ideas.

So really the premise is to take the conversation [out of] a highly politicized and polarized context and bring it into the realm of art as a means for dialogue and possibly change. "Girl With Gun" by Marcus Kenney[/caption]

A lot of the artists that you hired or drafted to do this are working largely with guns as their medium. So, tell me about that choice.

The exhibition was conceived of in the mid-1990s by the artist named Brian Borello. In the mid-1990s, the murder rate in New Orleans was really high. Borello conceived of the idea of giving artists guns to work with, and so the premise has continued. So that was in 1996. That exhibition was on "Good Morning America," [in] Time magazine, The New York Times, and then it kind of disappeared.

In 2012, after Sandy Hook and Columbine and the other mass shootings that you read about seemingly on a daily basis, I asked, What can I do?

I started working with the City of New Orleans, the mayor's office, the police department, the city council, and I was able to secure 186 decommissioned guns taken off the streets of New Orleans from a gun buyback program. Then I gave the actual decommissioned guns to artists that I chose from across the country. Those artists were working in a variety of different media: painters, sculptors, glassblowers, photographers, you name it.

Most of these artists had never worked with guns. That was really the challenge to these artists, to take these foreign and somewhat treacherous materials, to weigh in with your perspective and to use the guns to address the issue of gun violence.

There are over 30 artists in the exhibition and none of those 30 artists tackled the same issues from the same perspective in the same way.

This is not for the faint of heart. These works are beautiful, but they're also made from guns. Guns have their own loaded perceptions with everyone across America, whether you've been exposed to gun violence, you own a gun, or you have no exposure to gun violence.

Mass shootings get a lot of headlines, but there's killings that happen on an everyday basis in urban America that seemingly get overlooked as well. It's a multilayered conversation and what these artworks do is talk about that specifically.

It's unrealistic for the exhibition to be able to travel to every urban and rural community across America, but this book is an extension of the project. It features not only the artworks and the artists' statements but also essays by national thought leaders on the issue of guns and gun violence.

The book has the ability to go into classrooms, across policymakers' desks and into the living rooms of America, and that's truly where this conversation needs to go and hopefully the book will enable this to happen.

There's nothing more personal than reading a book and being impacted by what you see in front of you and having to make a decision as to how you feel about this issue that is dividing our country. Your book contributors are a pretty diverse group of people, that would include Lupe Fiasco and Tim Kaine. Tell me about their contributions.

So, Lupe Fiasco I've met at the Aspen Institute when we were both participating in the Aspen Action Forum. We started talking, and he told me how much he loves New Orleans. He's in Chicago. I said, Hey, man, I'm working on this project and maybe you could do something for it.

He wrote this piece which I think is exceptionally interesting, but to be honest with you I have a hard time understanding the full breadth of what he's actually saying because it's poetic and it's — maybe I'm not the most poetically inclined, if you will.

In challenging the artists, I never told them what to create, and he decided to write this poem for this piece.

I reached out to Tim Kaine and said, "Senator, I'm putting together this book, would you write something for this book," and he responded, "Yes, I will. It's a very important issue to me."

His essay was more about the firsthand [experience] of being an elected official in the context of city council[or] in Richmond, mayor of Richmond and governor of Virginia when the Virginia Tech shooting happened.

My role was the curator and assembler of these people and disparate voices because the gun issue affects everybody across the spectrum. It's a multi-perspective, sensible conversation about guns and gun violence.