Increasingly authoritarian U.S.-allied Turkish President Erdogan is exploiting the failed coup to carry out his own 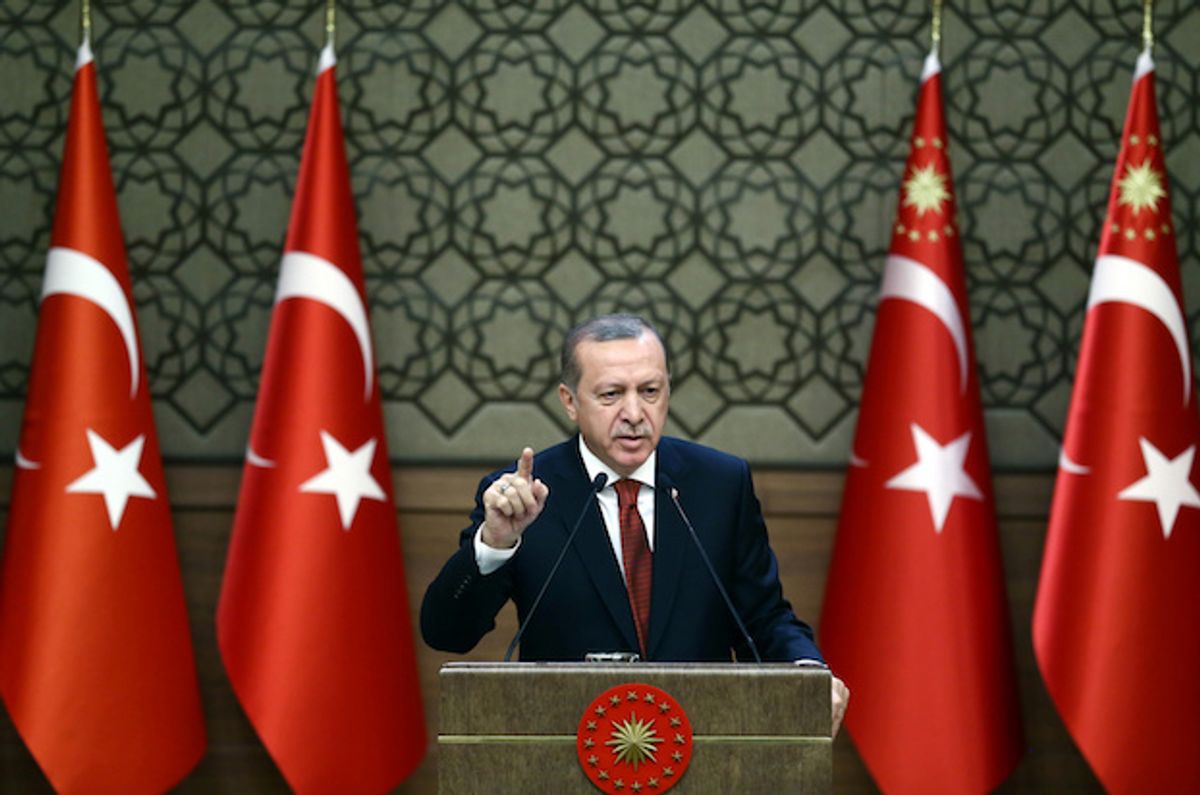 Turkish President Recep Tayyip Erdogan has taken advantage of the failed coup attempt in July to carry out a coup of his own.

In the past three months, more than 110,000 people have been purged and nearly 40,000 have been imprisoned in Turkey, a NATO member and close Western ally. The increasingly authoritarian President Erdogan is implementing a slow-motion coup, restructuring the government and civil society through a mass purge of the political opposition.

People from all sectors of society have been targeted — those working in the government, military, courts, media and academia. Over the weekend, more than 10,000 civil servants were fired en masse. Among the purged were health workers and at least 1,200 academics. New government decrees granted Erdogan the power to appoint university officials, while simultaneously stripping lawyer-client confidentiality rights from those detained.

Opposition figures like Sezgin Tanrikulu, a member of parliament from the left-leaning, secular Republican People's Party, are alarmed. "What the government and Erdogan are doing right now is a direct coup against the rule of law and democracy," Tanrikulu warned on a Periscope broadcast.

Independent, critical journalism is on the verge of extinction. Outlets that oppose Erdogan's right-wing, Islamist and neoliberal Justice and Development Party, known by the acronym AKP, have faced raids and arrests.

More than 160 media outlets have been shut down since the failed coup. On Saturday alone, the Turkish government closed 15 newspapers, news agencies and magazines that report from the largely Kurdish southeast, Reuters reported.

Some of Turkey's largest newspapers have even come under attack. On Monday, Turkish police detained Murat Sabuncu, the editor-in-chief of Cumhuriyet, a prominent daily newspaper with a left-leaning, secular editorial stance. Throughout the rest of the day, authorities rounded up 11 more journalists and executives at the publication. Arrest warrants were issued for at least three more people linked to the newspaper.

Human Rights Watch released a report on Monday about "the deepening crackdown in Turkey." Emma Sinclair-Webb, Turkey director at the rights group, condemned the "ludicrous charges" levied against detained journalists.

Democracy is not even on the agenda. Elected officials have been simply removed from their offices. Kurdish officials have been primary targets. Turkey's Kurdish minority, which makes up roughly 20 percent of the population of nearly 80 million, has borne the brunt of the crackdown.

Elected mayors and local councils have been fired and replaced with unelected administrators in 27 municipalities in the largely Kurdish southeast, according to Human Rights Watch.

At least 30 elected Turkish mayors are being held in pretrial detention, Human Rights Watch reported. Even more are under criminal investigation on suspicion of supposed terrorism offenses.

On Sunday, the government detained the two elected co-mayors of the predominately Kurdish city of Diyarbakir. Human Rights Watch said they were jailed on "trumped up terrorism charges."

In the month of October , the Turkish government jailed 98 officials from the leftist Democratic Regions' Party, an allied organization of the Peoples' Democratic Party, a leftist, feminist, pro-Kurdish party that has become the third largest faction in parliament.

After the failed July coup, the Turkish government declared a state of emergency, which it extended for another three months in October. Under the state of emergency, opposition figures are frequently dubbed "terrorists" and detained without due process.

Human Rights Watch said it "has repeatedly demonstrated that investigation and prosecutions for terrorism-related offenses in Turkey are routinely conducted in an arbitrary manner, lacking concrete evidence and an adherence to due process."

The rights group added, "The application of these laws without evidence to democratically-elected local government officials disenfranchises thousands of voters as well as unjustly penalizing the elected officials concerned."

Two dozen nongovernmental organizations, including Amnesty International and Human Rights Watch, released a statement last month calling on Turkey to revoke the state of emergency. They said "Turkish authorities have abused emergency provisions to stifle dissent, through the detention of large numbers of individuals" and the "removal of fair trial protections and crucial safeguards against torture and other ill treatment exceed permissible."

The Turkish government typically accuses opposition figures of secretly working in a large conspiracy for one of two designated "terrorist" groups: the movement led by exiled cleric Fethullah Gülen or the Kurdistan Workers’ Party, an armed revolutionary socialist organization.

Gülen, who lives in rural Pennsylvania in the U.S., has developed an international moderate Islamist movement, which is influential inside Turkey. He was previously an ally of Erdogan but has become one of his biggest enemies.

The Kurdistan Workers’ Party, known by the acronym PKK, has played a leading role in a 30-year armed struggle for autonomy and self-determination for the Kurdish minority. More than 40,000 people have been killed in the conflict, most of whom have been Kurds.

Erdogan has vowed to "dry the swamp" and crush the Kurdish insurgency. For months the Turkish government has waged a brutal, violent crackdown on predominately Kurdish areas in the south.

Human Rights Watch said Turkey's "actions do not reflect any good faith effort to respect its human rights obligations. On the contrary, the actions clearly violate many guarantees, including the rights to freedom of expression, liberty, and security, and access to justice."

The jailing of the two co-mayors of the largely Kurdish city Diyarbakir "without credible evidence of criminal wrongdoing is the most dramatic evidence to date of the government’s willingness to deny the people of southeastern Turkey the right to democratically-elected political representatives,” said Sinclair-Webb.

“Jailing elected mayors and the assault on independent media seriously call into question whether Turkey’s political leaders have any regard for basic democratic principles,” she added.

The U.S. and Turkey's European allies have criticized the Turkish government's creeping authoritarianism but have not backed up their rhetoric with action. Western allies continue to support Turkey in its intervention in Syria and have not pursued any punitive measures to halt its behavior.

After police detained the editor and top staff of the newspaper Cumhuriyet on Monday, Turkey's American and European allies voiced concern. Martin Schulz, the president of the European Parliament, tweeted that Turkey had crossed "yet another red-line" against press freedoms.

Turkish Prime Minister Binali Yildirim shot back in a speech in parliament, "Brother, we don't care about your red line." The Turkish government has made it clear that its coup will go on, and Western governments have done little to stop their ally from continuing its course. In fact, the U.S. applauded Turkey's military intervention in Syria, facilitating the incursion.