"They talk about us, not really to us": Muslim Americans cringe at how presidential nominees portray them

Instead of voters, they're seen as topics to be talked about 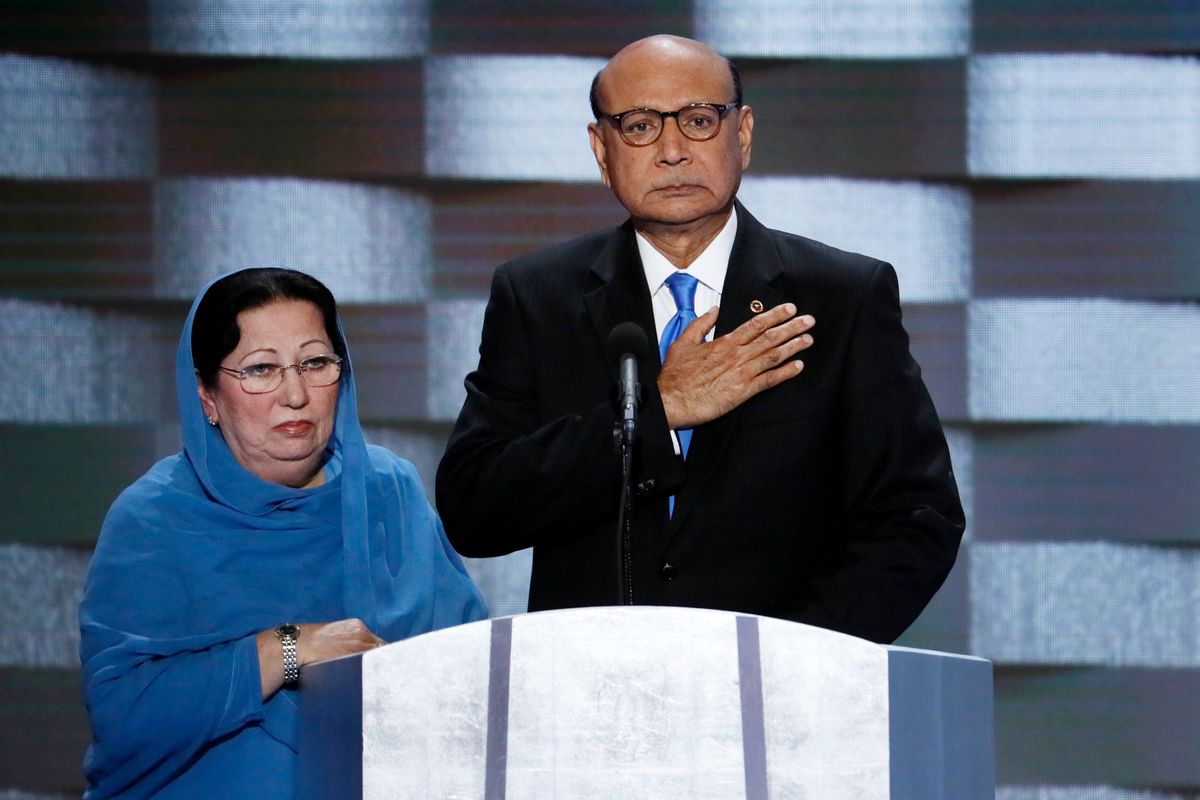 FILE - In this July 28, 2016, file photo, Khizr Khan, father of fallen Army Capt. Humayun Khan and his wife Ghazala speak during the final day of the Democratic National Convention in Philadelphia. Many Muslim Americans cringe at the way they have been portrayed by candidates during the presidential campaign, either as potential terrorists or as eyes and ears who can help counterterrorism efforts. Those descriptions have been offered by Donald Trump and Hillary Clinton, respectively. And they trouble Muslims who complain they are being pigeonholed and their concerns on other issues ignored. (AP Photo/J. Scott Applewhite, File) (AP)
--

NEW YORK — Many Muslim Americans cringe at the way they have been portrayed by candidates during the presidential campaign — either as potential terrorists or as eyes and ears who can help the government's counterterrorism efforts.

Those descriptions, offered by Donald Trump and Hillary Clinton, respectively, are troubling to Muslims who complain they are being pigeonholed and their concerns on other issues ignored.

"I think that there is some level of dismissiveness about Arab-Americans and American Muslims that allows candidates to talk about us, not really to us," said Omar Baddar, a political analyst and media producer based in Washington.

Chaumtoli Huq, a lawyer from the New York City suburb of Yonkers, agreed.

"We're not able to talk about issues that impact us as citizens — education, jobs, things that any other voter would care about," she said. "It's a really demoralizing way to be seen to be part of this country."

One of the campaign's more memorable moments for Muslim Americans unfolded at the Democratic National Convention in July, when a grieving Khizr Khan addressed delegates about his son, Humayun, an American soldier who was killed in Iraq. The GOP candidate soon pushed back against Khan's anti-Trump comments, setting up an almost unprecedented episode in which a presidential nominee criticized a military family that lost a loved one in a war zone.

Huq and others said Trump's campaign has clearly been the more negative one, starting with his call to ban foreign Muslims from entering the United States as an anti-terrorism measure.

In the second presidential debate in St. Louis, Trump answered a question about how to stop Islamophobia in America by saying American Muslims must report other Muslims who are engaging in dangerous behavior. He also repeated the false claim that neighbors of the San Bernardino, California, shooters saw bombs all over the floor in the shooters' home last year but did not report it.

That led to a widely retweeted comment from Brooklyn College professor Moustafa Bayoumi, who posted, "I'm a Muslim, and I would like to report a crazy man threatening a woman on a stage in Missouri." By the time the debate ended, his retort had been retweeted more than 32,000 times and "liked" more than 43,000 times.

Speaking to The Associated Press, Bayoumi said Muslim Americans "get exceptionalized to such a degree that their average Americanness disappears in the wind."

But Hillary Clinton did not escape censure from Muslim Americans, who said that the Democratic nominee's public remarks have primarily revolved around recognizing them for what they could do to support counterterrorism efforts.

At that second debate, in answering the same question as Trump, Clinton said: "We need American Muslims to be part of our eyes and ears on our front lines. I've worked with a lot of different Muslim groups around America. I've met with a lot of them, and I've heard how important it is for them to feel that they are wanted and included and part of our country, part of our homeland security, and that's what I want to see."

Nour Eidy, a freshman at the University of Michigan, grew up in the Detroit suburb of Dearborn, which is heavily Arab and Muslim. She was troubled by the call to root out radicals, mainly because she has not come across any.

"I don't know anything about terrorism. I don't know their game plans, their strategies," she said. "We're just as victimized by them as anybody else."

Hussien Kazwini does not object to calls for Muslims to identify dangerous extremists. The college student in Toledo, Ohio, whose parents were born in Lebanon, said it's what every U.S. citizen should do.

"We, at the end of the day, are around more Muslims at a mosque or an event," Kazwini said. "Maybe we do have an ability to more easily see if someone is going over to the extreme side."

Frustration with the race is enough to make Ramah Kudaimi want to skip voting altogether.

"People are so shocked by what Trump is saying, that he's — and he's so openly racist — that they are giving Hillary Clinton a pass," the Washington, D.C., organizer said. "The Democrats, frankly, have not necessarily done what is needed to also earn my vote as a Muslim American."

In New York, Ahsia Badi said the campaign rhetoric had also affected how non-Muslims interact with Muslims. "This sort of dialogue ... is forcing people to sit there and see their friends who happen to be Muslim, to be their 'Muslim friends.'"

The 44-year-old health professional has two children, ages 10 and 8.

Because of the constant linkage between Muslims and terrorism issues, she said, "I'm worried about how my children see their own opportunities and what their role is" as Americans.

From The Wires Video