What a Kroc: How McDonald's avoids responsibility for its franchises' mistreatment of workers

Locked in a legal case that could have changed the franchising business forever, McDonald's dodged a bullet 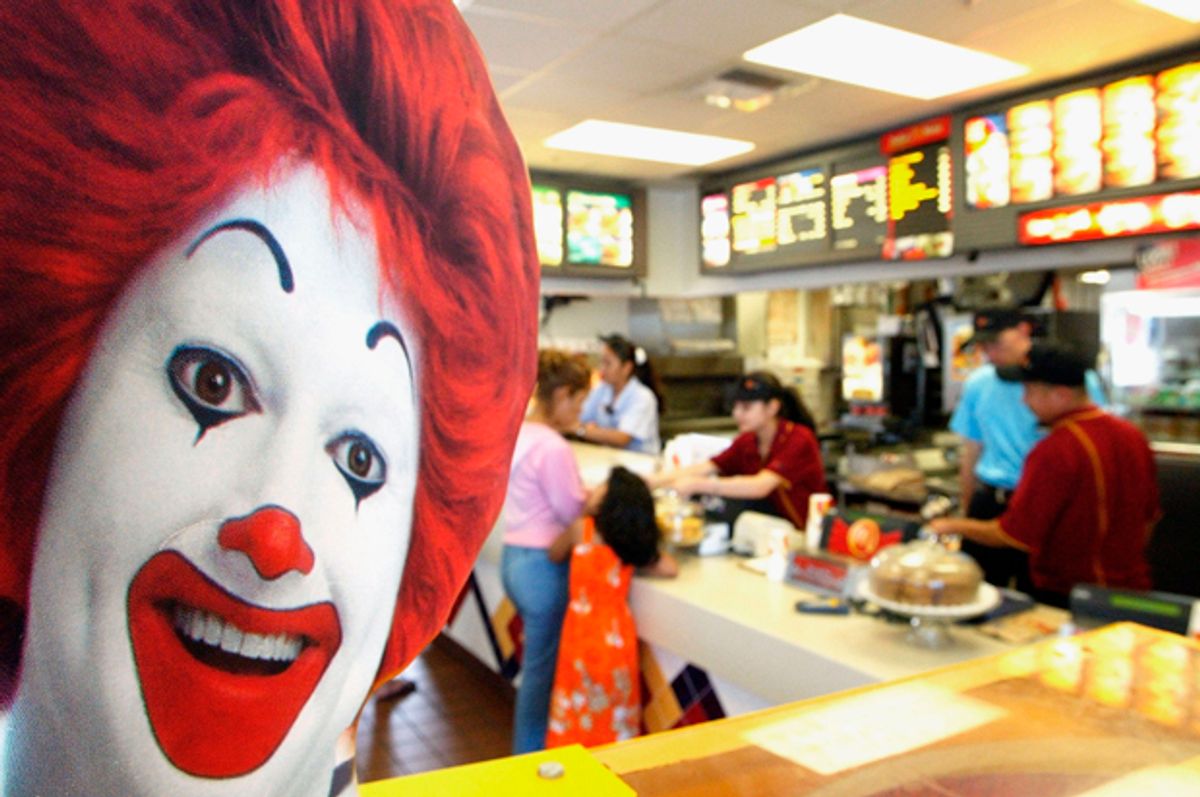 Is McDonald’s a $96 billion behemoth instantly recognized virtually anywhere in the world or is it just a group of humble, locally owned businesses just trying to make a buck? To most customers, it doesn’t matter. With few exceptions, the restaurant chain reliably offers the same dining experience whether its venue is located in New York City or off the highway in rural Texas.

This consistency can be deceptive, however. Most McDonald’s outlets — about 80 percent of them — are part of a massive franchise network of roughly 13,000 stores in the U.S. that employ most of the 420,000 workers. These licensed restaurants are tightly managed from the company’s headquarters in Oak Brook, Illinois, but when it comes to the tens of thousands of franchise line cooks, cashiers and managers, McDonald’s wants no responsibility for their treatment.

But now, in an unprecedented move, McDonald’s recently decided to fork out millions to settle a wage-theft class action brought by hundreds of San Francisco area McDonald’s employees. While the $3.75 million payment is a victory for the workers involved, it stops short of helping labor activists in their effort to hold McDonald’s responsible for the treatment of franchise employees — and that’s a relief to managers at big companies who have nervously watched the debate over where responsibility for mistreatment of franchise employees falls.

A court ruling against McDonald's would have set precedent and could have set off a domino effect among fast food restaurants and other franchise businesses. By settling instead of fighting, McDonald’s wins to fight another day — perhaps under a future administration that installs less labor-friendly regulators than those appointed by President Barack Obama.

“They didn’t want to risk it, that they would be responsible for the employees of a franchisee; that would be enormous,” César F. Rosado Marzán, an associate law professor at the Illinois Institute of Technology’s Chicago-Kent College of Law, told Salon. “It’s not that different to what’s happened with Uber litigation, where Uber has been trying in a similar way to settle the cases with Uber drivers so they don’t get a ruling that says they are employees of Uber.”

The workers in California allege in the lawsuit filed in 2014 that a local owner of five restaurants denied them earned wages, overtime pay for overnight shifts, required meal periods and other breaks. Crucially, the suit named the McDonald’s Corp. as a defendant in the suit. On Friday McDonald’s agreed to settle, it said, in order to avoid further litigation costs. Yet the company “reconfirms that it is not the employer of or responsible for employees of its independent franchisees,” according to a statement from McDonald's spokeswoman Terri Hickey. McDonald’s faces similar lawsuits in other states, including Michigan and New York.

Labor rights activists content that McDonald’s has such immense sway over how franchisees operate, that it should share liability for civil violations like wage theft, civil rights violations and foreign guest worker abuses committed by its franchise operators.

The suit arose after the National Labor Relations Board broadened its interpretation of what qualifies as a “joint employer” when it comes to union organizing activity — a move that comes closer to making large corporations responsible for the treatment of workers down the labor supply chain.

The ruling stems from an August 2015 decision by the NLRB involving Browning-Ferris Industries, a New Jersey-based waste management company and a temporary labor-placement agency that the company used while employees were trying to form a union, but the decision applies to all company subcontractors and franchisees.

The Department of Labor appears to be in agreement with the NLRB’s stance that companies should do more to protect the rights of their franchise workers. In August Doctor’s Associates, which owns the Subway restaurant chain, entered into an agreement with the Department of Labor to do more to ensure its franchise operators aren’t committing wage violations.

The franchise industry and its allies in Congress are fighting this expanded definition of what constitutes an employee of a company that uses a franchise model.

For now, the franchise industry has dodged a bullet. But it’s seems as if it's only a matter of time before another case will crop up somewhere that will settle the question of whether a person wearing the uniform of a multibillion-dollar operation is in fact an employee of that company.