Death threats have been coming in from alt-righters believing Chobani yogurt wants to “drown the U.S. in Muslims" 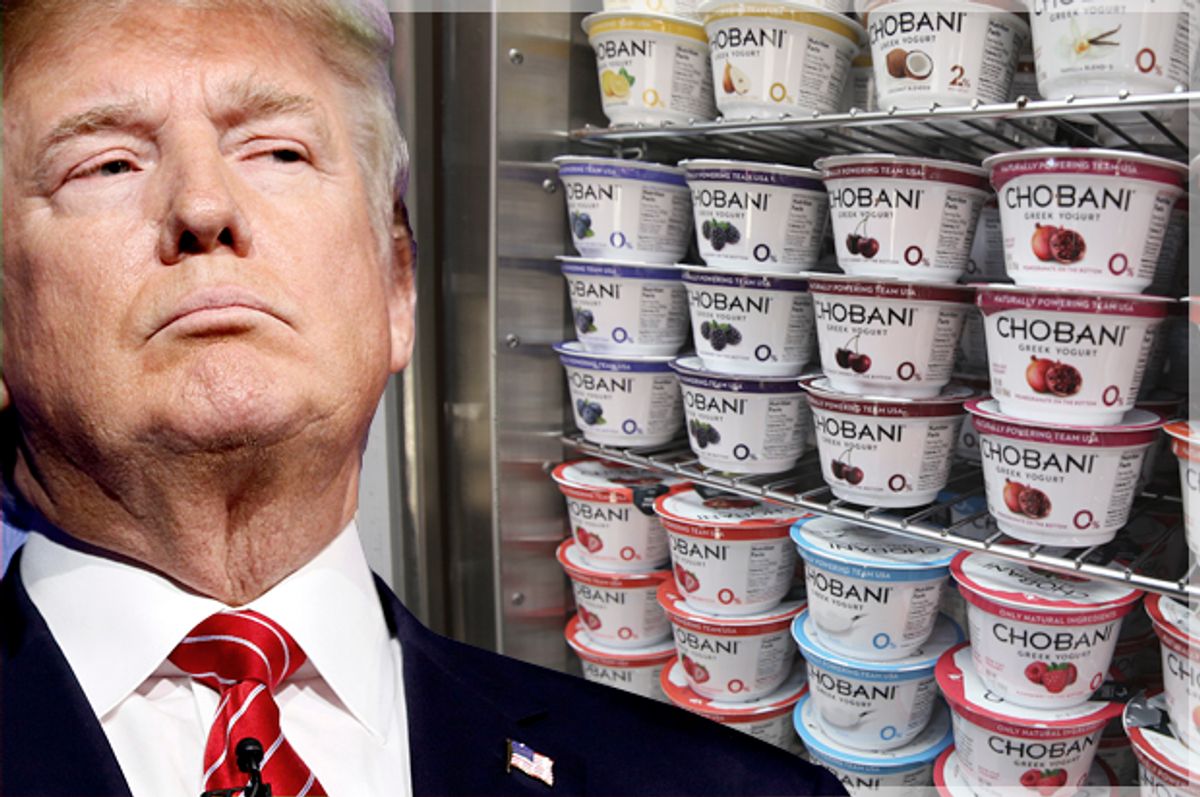 The yogurt company Chobani has in the past made news for really great reasons: Six weeks of paid parental leave for every employee, as well as shares worth up to 10 percent of the company for full-timers if and when the company goes public. But in recent months, the New York-based company has come under much more negative scrutiny from right-wing media outlets — leading to death threats for the company’s founder.

Mobilized by the anti-immigration rhetoric that has propelled the presidential campaign of Republican nominee Donald Trump, alt-right trolls have targeted Chobani for daring to hire resettled refugees in the midst of what the United Nations has called the largest refugee crisis since World War II.

In a January opinion piece for CNN Money, Ulukaya wrote about his advocacy efforts like creating the Tent foundation, an organization that aims to help the more than 65 million people who have fled armed conflict or persecution and now are displaced around the world, to motivate the private sector to help end the refugee crisis:

The Tent Pledge asks companies all over the world to step up and do more. We're asking them to provide refugees with job training, employment opportunities, and the kind of direct assistance that experts have identified as a priority — everything from blankets and water, to debit cards and Internet access.

Shortly after the op-ed was published, the far-right website World Net Daily published a story titled, “American Yogurt Tycoon Vows to Choke U.S. With Muslims." (The title has since been changed.)

Ulukaya’s profile amongst right-wing hatemongers only exploded after he followed-up his column with an appearance at the Davos economic forum in January where he called on multinational corporations to hire more refugees.

"The minute a refugee has a job, that's the minute they stop being a refugee," he told the global business leaders.

And after the world’s largest yogurt factory announced plans to expand with a $100 million research and development center in the center of a small Idaho town earlier this year, the company attracted the attention of Breitbart, the right-wing website whose former executive chairman Stephen K. Bannon is now running Trump’s presidential campaign.

Idaho happens to be one of the five highest refugee-absorbing states per capita, due to its low cost of living and 3.9 percent unemployment rate, according to the Daily Beast. The state has welcomed about 30,000 refugees from more than 50 countries since the 1970s. And like he did with his New York factory, Ulukaya relied on a local refugee resettlement center to find new hires for his Idaho plant.

The coverage from Breitbart attempted to smear the company with annual yogurt sales of about $1.5 billion as a menace to society and scourge on the local community.

One Breitbart story suggested that Chobani’s hiring of refugees caused Idaho’s rise in tuberculosis with the headline, "TB spiked 500 percent in Twin Falls during 2012, as Chobani Yogurt Opened Plant." Another titled “Twin Falls refugee rape special report: why are the refugees moving in,” attempted to link the company’s hiring of refugees with two sexual assault cases in the Idaho town. And a third article claimed Chobani has "deep ties" to a pro-Clinton advocacy group that imposed the refugee crisis in Twin Falls.

In August, a white nationalist organization that endorsed Trump for president issued robocalls across Idaho claiming that the “nonwhite invasion of their state and all white areas constitutes white genocide.”

As a result of Breitbart's fearmongering, Shawn Barigar– the mayor of Twin Falls– and Ulukaya found themselves on the receiving end of racist epithets and death threats, the Times reported.

“It got woven into a narrative that it’s all a cover-up, that we’re all trying to keep the refugees safe so that Chobani has its work force, that I personally am getting money from the Obama administration to help Chobani hire whoever they want, that it’s part of this Islamification of the United States,” Barigar told the Times. “It’s crazy.”

According to Business Insider's analysis of the hashtag "boycott Chobani" on Twitter, many of the threats are coming from supporters of Trump:

“Mr. Ulukaya hasn’t merely involved himself in this issue, he’s been one of the leaders in expanding refugee resettlement in the United States. Breitbart’s explosive growth is due in large measure to the mainstream media’s refusal to cover vital topics like this one,” Marlow said in a statement.

Despite Trump’s army of alt-right trolls, however, Ulukaya stands as a perfect rebuke to those who want to scare the United States into shutting its doors to immigrants.