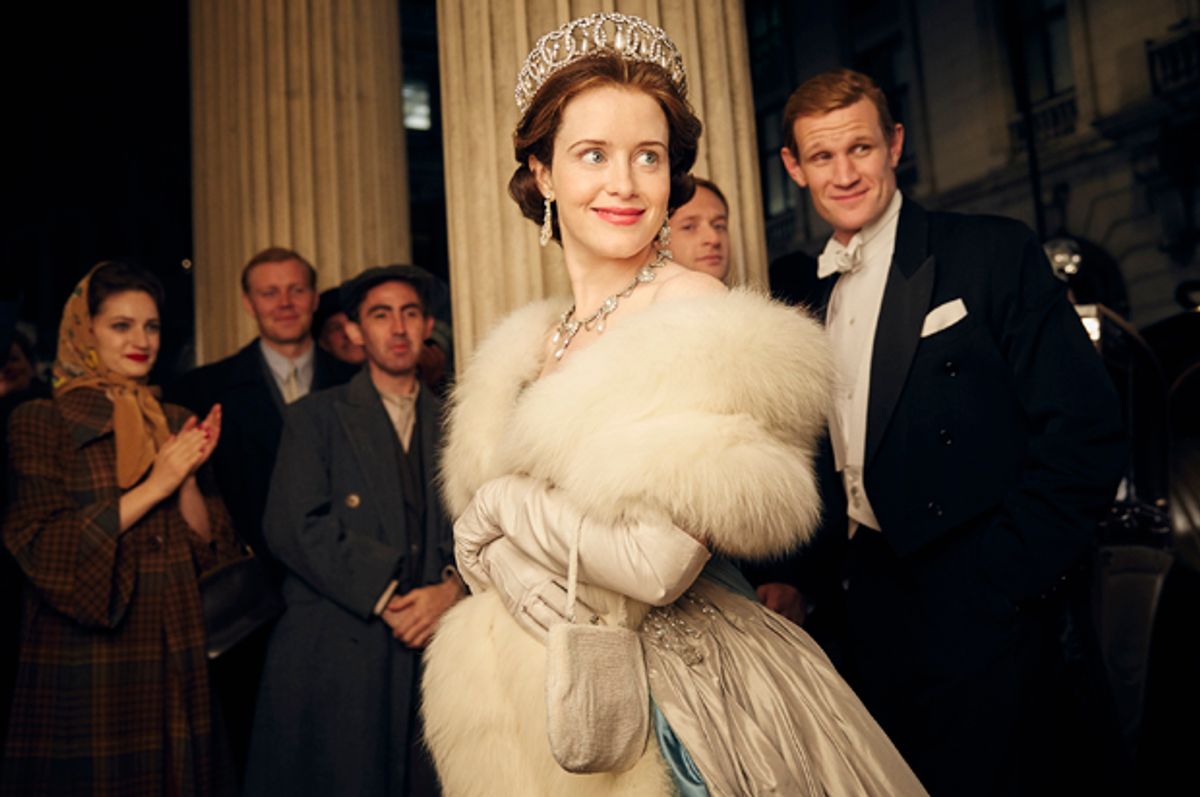 After viewing all 10 first season episodes of “The Crown” in two days, most of them in one sitting, I can honestly report that it’s the least bingeable new Netflix series in recent memory. That’s not a slight, mind you, because it's also one of the streaming service’s most thoughtful offerings yet, making it worthy of slower digestion.

Even the most ravenous viewing appetites can benefit from a meatier, complex chew now and then. And season 1 of “The Crown,” which debuts on Friday, is certainly that. Researched for two and a half years before creator Peter Morgan began writing its scripts, this drama is executed with care that's evident in every scene.

Morgan has no fear when it comes to constructing dialogue that alternately caresses the ear and shreds the heart. As he demonstrated in his script for the Oscar-winning film “The Queen," Morgan is skilled at making Queen Elizabeth II live and breathe for the audience, though it’s Claire Foy’s graceful, nuanced performance that grants her warmth and humanity.

Foy has delivered captivating performances in critically acclaimed titles such as 2015’s “Wolf Hall” and “Little Dorrit” in 2008. But at the center of “The Crown,” the actress does some of her finest work to date by quietly conveying the burden of being an object to the public while attempting to remain a person in her private moments. Living with this sense of duality is the task the real Queen Elizabeth II has undertaken for more than six decades. But the average person can at last understand the weight of that challenge thanks to Foy’s portrayal, amply supported by equally vibrant performances from rest of this drama's extraordinary cast.

In "The Crown" both Elizabeth’s grandmother, Queen Mary (Dame Eileen Atkins) and the Queen Mother (Victoria Hamilton) blame the weight of the monarchy for shortening the life of Elizabeth’s father King George VI (Jared Harris, at his soul-stirring best).

In 1947, when the story begins, King George is in poor health but still on the throne, and Elizabeth is on the verge of marrying Philip Mountbatten (Matt Smith), a noble whose lower social station makes him a questionable match. Elizabeth has several years to enjoy the relatively luxurious role of new wife, mother, daughter and sister before her father's death in 1952, marking her ascension to the throne at age 25.

From that moment onward, Foy’s queen, Elizabeth Regina, must be the paragon of dignity and stoicism, even as the era of television and the explosion of celebrity come of age around her and her family. Foy captures the innocence and optimism of Elizabeth Mountbatten — daughter, sister and wife — only to sublimate those qualities whenever she presides over state matters or appears in public as Queen Elizabeth II. Employing the slightest shift in emotional affect, sometimes within the space of a sentence or two, the actress robustly defines the difference between the private woman and the queen, never letting viewers forget the young ruler’s discomfort with the divide between the two identities.

Young Queen Elizabeth is constantly reminded that her subjects only want the monarch, an object. To reveal any sense of individuality is to shatter the spell that gives the title its sway over commoners; thus, she learns to transform herself into an enigma. And she also receives a crash course in navigating a Parliament that doubts her, led by Prime Minister Winston Churchill (John Lithgow) at a time when his health and his political influence are in decline. The lessons she learns about what's entailed with being part of the ruling family and its restrictions are palpably brutal — not only for her but for her sister Princess Margaret (Vanessa Kirby).

There are many ways that “The Crown” could have misfired. Britain’s royals are at once among the most famous people in the world and, by design, the least known. Like all celebrities, they invite an insatiable curiosity about the real-life beings shuddering and sweating beneath layers of the finery and tradition, especially since every public statement they make is filtered through a lifetime of etiquette training and protocol.

That factor only amplifies Morgan's achievement in making these historical figures, whether still living or deceased, more than moving statues or luxuriously accessorized parodies. His Windsors are flawed and fragile; they strive to do their best but make terrible mistakes, some of them driven by ego. Through Morgan's writing and thoughtful directing by Stephen Daldry, Philip Martin and Julian Jarrold, "The Crown" bares their emotional frailties and resilience instead of merely wringing drama out of the darker scandals and cracks in the royal facade.

Re-creating events as viewed outwardly from Buckingham Palace is a necessary aspect of “The Crown,” imbuing the series dramatic import as well as a sense of the Windsor family’s continued impact upon our times, although the first season ends in the year 1955. An episode that covers the Great Smog of 1952 is particularly remarkable for its writing and fascinating cinematography, giving Lithgow the space to travel to the edges of his dramatic range. Churchill ultimately chose political advantage over scientific warnings about coal emissions resulting in the suffocation of at least 4 thousand Britons.

But the strength of “The Crown” is its examination of the aspects of royal tradition and manners that stifle, even strangle those who assume the mantle of royalty. Revealed, too, is the sense of frustration that must accompany being the embodiment of divine grace and rule while possessing limited power, if any, to ensure the happiness of one's family. And the machinations of Edward Windsor, shown as a scheming uncle and made especially unctuous by Alex Jennings, seek to emotionally separate Elizabeth from her family even further.

The strained evolution of Philip and Elizabeth’s relationship is not treated shyly, but Smith and Foy have carefully toed the line between melodrama and solemnity. Smith proved skillful at juggling various emotional facades in “Doctor Who,” and has employed the same energy to make Philip playful and, at various points, mildly repugnant. Never is there a time when Smith or the drama’s various directors have molded him into a villain. Instead, Smith's Philip is a fully realized man with the kind of doubts and envies that someone in his position would understandably have.

Though Morgan gives the cast a bounty of incisive dialogue to work with, the actors do their most effective work in the silences. Those quiet moments enable every member in the cast to stand out, with Hamilton and Kirby earning the greatest measure of empathy as they come to understand how difficult life can be for the family of a monarch. Harris' tender portrayal of George looms large even after the king passes away; Morgan made the sagacious choice to incorporate the king throughout the first season via flashbacks, which provides historical background and, just as important, keeps Elizabeth, the woman, grounded.

“The Crown” is as superb and heavy as, well, the actual crown. While the encumbrance of rule hasn’t shortened the real Queen Elizabeth II’s life — she turned 90 this year and has ruled for longer than any monarch in British history – viewers may more keenly appreciate the fortitude it takes to hold that scepter after watching this richly wrought drama. Slowly.