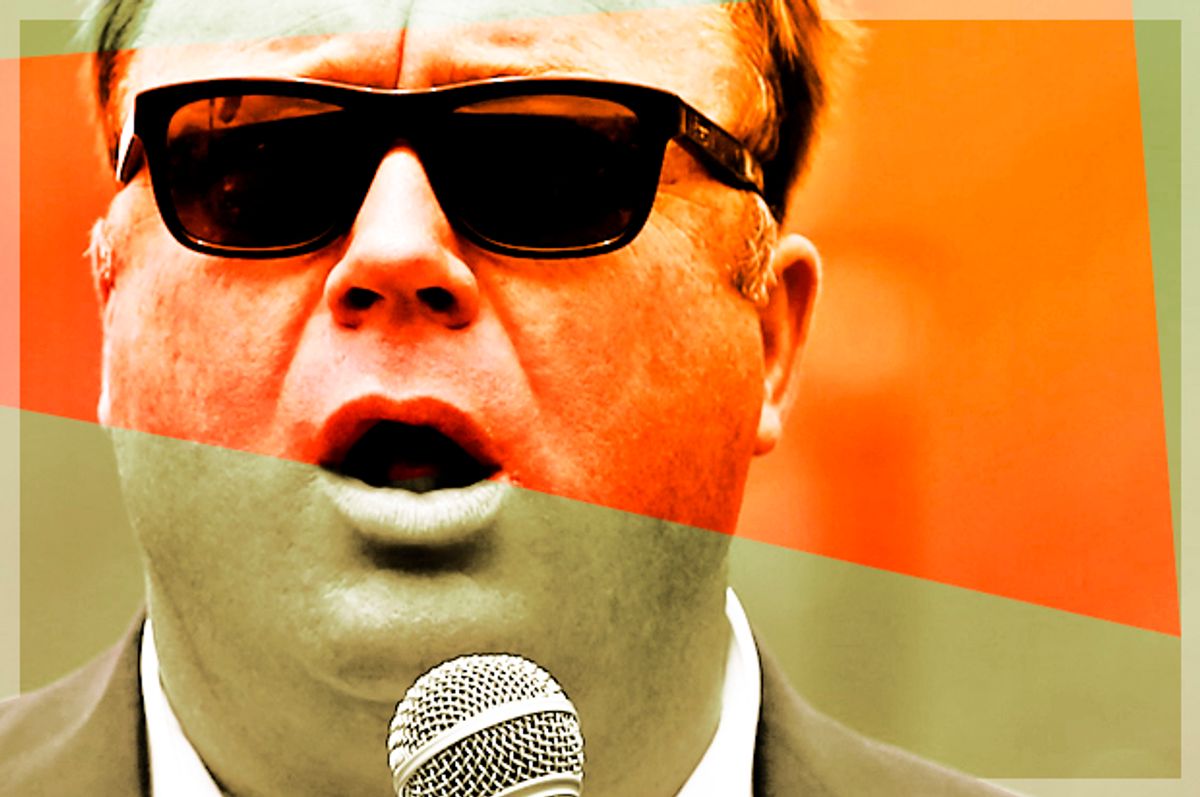 During my college years in the mid-to-late '90s, Austin's public access TV shows provided my friends and me with a frequent source of low-cost entertainment. We gathered to watch and to mock. One young host, barely older than us, ran a political talk show that became a frequent source of amusement. He was hard not to watch, with his paranoid, unhinged affect and elaborate conspiracy theories. He was fun to laugh at. How could anybody buy what this kook was selling?

Flash forward nearly two decades to the 2016 Republican National Convention, where that man, Alex Jones, reigned like a king.

Not officially, of course. The convention was supposed to be about the presumptive nominee, Donald Trump. But as a journalist on the ground, I couldn't help but notice that a T-shirt reading "Hillary For Prison 2016" was everywhere. On the back was the unmistakable logo for Infowars, Jones's multimedia company that pumps out an endless stream of videos, articles and radio shows geared toward spreading every political conspiracy theory you can imagine, from Hillary Clinton's supposed brain damage to President Barack Obama's "faked" birth certificate.

At times, it seemed like a quarter of the men at the convention were wearing this shirt, something that many other journalists noticed as well. Inside the convention, chants of "lock her up" kept on erupting, demanding that the Democratic candidate Hillary Clinton be arrested for crimes that exist only in the minds of conspiracy theorists like Jones and his audience.

Jones and his conspiracy theories had conquered the Republican Party.

"Harmless, a crank with a loud voice"

"Alex Jones is not ignorant of what people are saying about him," Lee Nichols of the Austin Chronicle wrote about him in 1998. "They're whispering behind his back — well, no, actually they're saying it right to his face — that he's nuts."

As Nichols noted, Jones was the "leading light" of what was then called the "black helicopter" crowd, for its members' belief that the government was monitoring citizens with mysterious black helicopters. They were libertarian-leaning conspiracy theorists who were less ideological in their orientation than they were paranoid.

To understand Jones's place in Austin at the time, it's important to understand that it's a city, especially back then, with a broad tolerance for eccentricity and an abiding enthusiasm for marijuana.

"My fellow college kids and I saw him as amusing and sort of fascinating," my friend and longtime Austinite Chris Lippincott recalled in a text message to me about watching Jones' public access show and listening to his late 1990s KJFK radio show. (The radio show got good ratings, but didn't last long, as few advertisers were willing to be associated with Jones' conspiracy theories.)

"He was seen as harmless, a crank with a loud voice," Lowell Mick White, who drove a cab in Austin in the '90s, shared via email. "Basically, he was seen as a joke, a representative of Austin's dark side."

"Jones occupied a space outside of conservative circles," Bre Bader, who graduated from high school in Austin in the '90s, said via email. Bader, who grew up in a "conservative, fundamentalist, evangelical Christian environment," said that the conservatives she knew in the '90s thought Jones was "bonkers."

He's "someone they're now taking seriously," she added ruefully.

"He was effective in getting a lot of vaguely, political-lefty hipster types on board," said Adam Seehaver, an Austin community organizer who was focused on police accountability and anti-globalization efforts in the '90s and early 2000s.

"He played a lot of his racism, xenophobia and homophobia a lot closer to the vest in those days," Seehaver shared with me by email, saying that Jones would often show up at police accountability actions, trying to recruit lefty activists to his cause with his "'anti-authoritarian' aesthetic."

I spoke with a number of people who lived in Austin at the time and they all agreed that Jones was regarded as a harmless crank for most of his career. Many compared him to Art Bell, the host of a popular late-night show that pushed stories about UFOs and ghosts.

Linklater told The Washington Times in 2006 he doesn't agree with Jones' views but said it "says a lot about a culture" that conspiracy theorists proliferate.

The darker side of Alex Jones

But even in the '90s, there were signs that what Jones was doing was more political — and more dangerous — than Art Bell's work.

Matt Osborne, who served as an Army linguist at Fort Hood in Texas in the '90s, told me he was "mostly entertained by Jones's ridiculous obsessions" until an incident in 1997, when multiple people were arrested for a plot to invade the Army base and shoot the place up. They believed that the United Nations was using Fort Hood as a base of operations for the "New World Order." Fort Hood is near Austin and therefore is a frequent target of Jones' unhinged rantings about that brand of international conspiracy.

For my part, my unease with Jones was pricked by his obsession with the Branch Davidians in Waco, Texas. In 1993, the Bureau of Alcohol, Tobacco and Firearms approached a compound run by this religious cult in order to arrest its leader, David Koresh, on illegal weapons charges. Rather than complying with the warrant, the cult members unleashed a hail of gunfire on the ATF agents, injuring 16 and killing four. This resulted in a 51-day standoff with the organization that ended only when members set fire to their own building in a suicide-murder attempt that resulted in the death of more than 80 people.

Jones was, to put it bluntly, an apologist for Koresh, and to this day he promotes conspiracy theories accusing the government, under orders of then president Bill Clinton and attorney general Janet Reno, of killing the cult members on purpose. In 1999, Jones led an effort to build a church in Waco for the remaining cult members, accusing the government of committing murder as a "cover-up of its violation of the First Amendment."

The lionization of Koresh hinted at Jones's paleo-conservative agenda. Koresh had propped himself up as the ultimate patriarchal authority in his followers' lives, amassing multiple wives, some reportedly as young as 11. Even in death, Koresh treated other people, especially women and children, as property, condemning them to be burned alive rather than submit to the government's authority. Koresh is the ultimate example of the evils that can flourish in a libertarian system where the government has abandoned its duties to protect civil rights and public safety, but Jones was treating the guy as if he were some kind of hero.

(Jones may ardently defend Koresh's illegal behavior under the banner of "liberty," but he bashes San Francisco 49ers quarterback Colin Kaepernick for the victimless noncrime of failing to stand during the pre-game national anthem.)

Jones maintained his reputation of being a nonpartisan conspiracy theorist during the first decade of the 21st century by being the country's pre-eminent 9/11 truther. On the day that the Twin Towers fell, Jones took to his microphone and declared that there was a "98 percent chance this was a government-orchestrated controlled bombing."

The concept of "false flags" — that terrorist attacks, mass shootings and other horrific events are staged by the government in order to move public opinion — has been the backbone of Jones' operation for most of his career. He was an early proponent of the theory that the Oklahoma City Alfred P. Murrah Federal Building bombing of 1995 was an "inside job" and that Timothy McVeigh acted under the direction of federal agents. In recent years, Infowars has heavily pushed claims that the Sandy Hook school shooting didn't happen.

Now, Jones is a full-fledged creature of the right. Even the 9/11 conspiracy theories, which used to be more popular with Democrats, have morphed into a right-wing phenomenon among Jones' followers. At the Infowars-hosted rally at the Republican National Convention, 9/11 trutherism was popular with the right-leaning crowd. Jones even alluded to the conspiracy theory from the stage.

It makes a certain amount of sense: For those who supported the Iraq invasion, believing you were tricked into it by the George W. Bush administration makes it easier to forgive yourself.

From in-joke to political player

"I don't care if it's Bill Clinton or Governor Bush, they're all elitist filth if you ask me," Jones told The Austin Chronicle in 1998.

That was then. Today, Jones has thrown his full weight behind Republican nominee Donald Trump, even though Trump, as a wealthy businessman, is the ultimate elitist.

Trump loves Jones right back. In an interview with Infowars, Trump told Jones, "Your reputation is amazing. I will not let you down."

In 1999, author Jon Ronson — who is very much not a conspiracy theorist — had a remarkable outing with Jones.

"Back in 1999 I had the idea, for my book Them: Adventures with Extremists, to try and sneak into the private summer camp Bohemian Grove where members of the ruling elite — Dick Cheney, George Bush, Henry Kissinger, et cetera — were long rumored by conspiracy theorists to undertake a ritual that culminated in a human effigy being thrown into the fiery belly of a giant stone owl," Jones recalled in a July story for the Cleveland Scene.

Believing that this was unlikely, Ronson "decided to try and sneak in and see for myself," he said. To make the whole thing more fun for the readers, he brought Jones along because Jones was a strong proponent of Bohemian Grove conspiracy theories.

Ronson and Jones both released their versions of the story afterward. Ronson wrote an entertaining and skeptical account in his book. Jones released a video called "Dark Secrets Inside Bohemian Grove."

"What we actually saw were a bunch of rich old Republicans dress in robes and hoods — like posh Klansmen — and solemnly undertake a very stupid pageant," Ronson wrote. "In Alex’s rendering, however, we might have seen actual human sacrifice."

In "Dark Secrets," Jones breathlessly narrated, "Now I personally am a Christian, but even an atheist should be concerned." Wealthy businessmen and politicians, in his estimation, "travel there to engage in bizarre ancient Canaanite, Luciferian, Babylon mystery religion ceremonies."

In his July piece Ronson lamented, "This week — and I could never have predicted this — Alex’s extreme conspiratorial rhetoric is seriously influencing the RNC."

Back in 2004 when I still lived in Austin I went to a screening of Michael Moore's documentary "Fahrenheit 911" at the Alamo Drafthouse, a beloved restaurant and movie theater that frequently produces screenings with guests, panelists or even musical acts to go with the movies. For Moore's film, it brought in Jones to introduce the movie and do a meet and greet afterwards. Moore's movie is not a conspiracy theory film so much as an indictment of George W. Bush based on publicly accessible, verifiable facts, but it seemed to me that Jones was hoping to draw audience members towards his more unhinged offerings.

But I don't believe that's why he was invited to host the screening. Instead, I got the distinct impression that the organizers invited him as a joke, a way to inject a little bit of Austin eccentricity into the proceedings. (The Drafthouse management is known for having a sense of humor, to say the least.) Certainly, I was laughing about it because that's how most Austinites in those days dealt with Alex Jones: We laughed at him.

But we're not laughing any longer.

Salon reached out to Alex Jones for comment on this story, but got no response.