Could it be that pudgy pops are actually in better health than their single, slimmer counterparts? 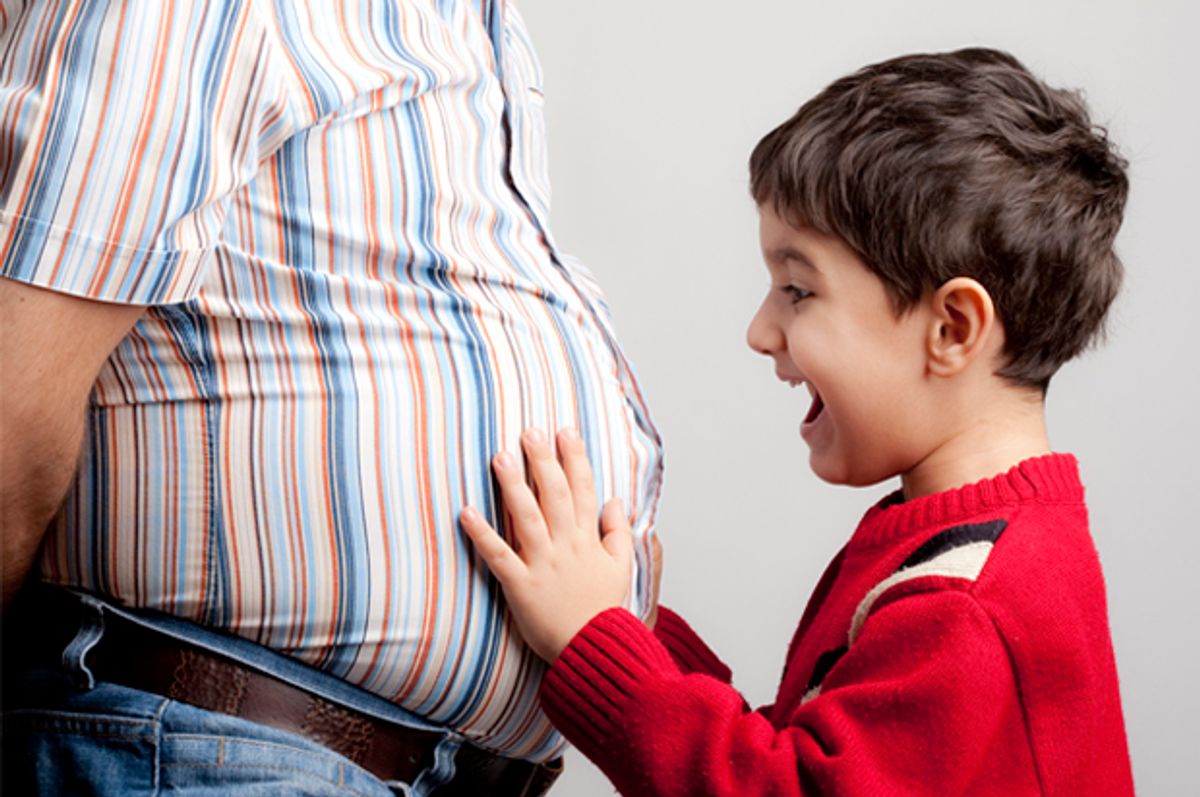 The "dad bod," it seems, is in vogue. And now a new book claims that gaining weight after fatherhood makes men healthier, more attractive and more likely to live longer than their “skinny” counterparts.

The author, Richard Bribiescas, professor of anthropology and deputy provost at Yale University, claims that this is likely due in part to the decreasing testosterone levels seen in older men. He writes:

[One] effect of lower testosterone levels is loss of muscle mass and increases in fat mass. This change in body composition not only causes men to shop for more comfortable trousers but also facilitates increased survivorship and, hypothetically, a hormonal milieu that would more effectively promote and support paternal investment.

But is there actually any solid science behind the idea that lower levels of testosterone – and a bit of a tummy – can make men healthier?

There exists a complex relationship between our body composition, the relative amounts of fat and muscle that we have, and how we age. While accurately measuring biological ageing is actually quite difficult, studies have nevertheless shown that having too much body fat can prematurely age us and that maintaining our levels of muscle mass could have the opposite effect. It is certainly true that frailty, a syndrome in which older adults carry an increased risk of poor health outcomes is increased in people who carry too much body fat.

But what about testosterone? Testosterone is a steroid hormone that in men is produced by the testes. Alongside governing male sexual characteristics, it also controls body composition, with lower levels – which naturally occur as we age –being associated with less muscle and more fat. It is this very change in body composition that these new claims of vitality are based upon.

Beyond this, there is actually some evidence that testosterone is involved in the aging process. The most profound evidence that testosterone can affect how we age comes from studies of people who have none: eunuchs or castrati. These men, who have had their testicles removed, outlive their non-castrated counterparts by as much as 20 years, suggesting that the levels of this hormone may have a profound effect on the aging process.

The precise reasons for this impressive effect are not very clear, but suggested mechanisms have included an increased ability to fight off infection and a reduced risk of developing prostate cancer, although the latter is a controversial link. It is unlikely the effect is related to cardiovascular health as low testosterone levels are also associated with cardiovascular risk factors and testosterone replacement therapy (TrT) has been shown to improve angina pectoris

How low can you go?

While having low testosterone levels might aid eunuchs in living longer, in the rest of the male population low testosterone is associated with a range of symptoms including poor cognitive function, decreased mobility, reduced sexual function, and lower energy levels, not a list of qualities that many potential partners would find attractive.

But can replacing testosterone levels that have diminished with age improve these issues? Certainly, TrT has been shown to have beneficial effects on bone health, body composition and memory and testosterone has even been called “the best anti-aging drug." Taken collectively, this evidence suggests that although an absence of testosterone over the lifespan may be beneficial, the reduced levels seen in middle-aged and older men might not be such a great thing.

One area of interest that this new book has highlighted is the observation that being overweight might be good for you, at least in terms of how long you live. Traditional opinion is that those of us who are overweight – that is, have a BMI of 25 - 29.9 – are unhealthy. But recent evidence suggests that people in this category might actually live longer than people who have a healthy, underweight or obese BMI, although conflicting evidence does exist.

This controversial finding suggests that there may be a benefit in being slightly overweight. So while this might not support the book’s claim that middle-aged men with “dad bods” are more attractive, it is possible that pudgy dads might live a little bit longer than their more slender counterparts. Just don’t give up on that healthy lifestyle.