Sean Hannity has the same journalistic ethics as 17-year-old Macedonian trolls. Can you tell the difference? (Quiz)

Small towns in Macedonia are producing fake news, but it sounds a lot like Sean Hannity's broadcasts! 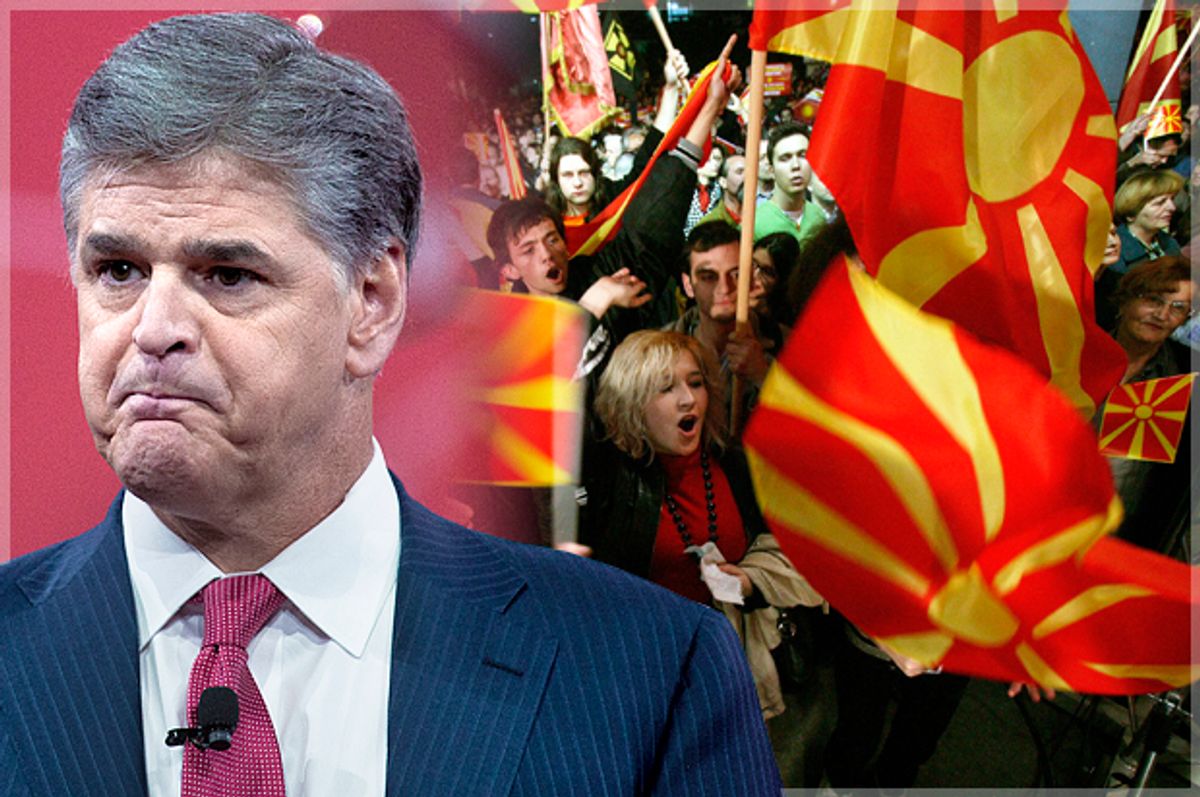 In the past year, more than 100 U.S. political news websites have launched in an obscure town in Macedonia, as part of a teenager's scheme to profit off the contentious U.S. presidential election. BuzzFeed News identified 140 websites with "American-sounding" domain names – WorldPoliticus.com, TrumpVision365.com, USConservativeToday.com, DonaldTrumpNews.co, USADailyPolitics.com, etc. – that were registered by people in Veles, Macedonia.

The websites, some of which have hundreds of thousands of followers on Facebook, frequently report fake news stories that indulge the fantasies of the alt-right. "Pope Francis forbids catholics from voting for Hillary," reads one headline. "Democrats caught faking thousands of votes," reads another.

Although these websites have a pro-Donald Trump tilt, the young Macedonians who run them – some just 16 and 17 years old – say they don't care for the GOP nominee, but they quickly realized the best way to generate traffic on these websites was to cater to Trump supporters, which required writing sensationalist headlines that parroted far-right talking points.

"Yes, the info in the blogs is bad, false, and misleading but the rationale is that ‘if it gets the people to click on it and engage, then use it,'" said a university student in Veles who agreed to speak with BuzzFeed News.

In other words, these teenage Macedonians are just as effective as Fox News' Sean Hannity at disseminating the news.

Which raises the question: How do these trolls stack up to the nation's No.2 conservative radio host? Guess who said it!

On Tuesday, Hannity came under fire for propagating a fake news story on his radio program. Hannity reported that President Obama, the first lady, and Senator Elizabeth Warren were deleting tweets that were supportive of Democratic nominee Hillary Clinton. After the show, Hannity issued a tweet that acknowledged the story was false.

It was the second time in a week that Hannity promoted a fake news story. In late October, Hannity reported a satirical news story about Obama saying he’d leave the country if Trump were elected president. The story was patently false — a joke conceived by Canada’s version of The Onion. Yet that didn't stop Hannity from treating the joke as a credible rumor.

An isolated mistake can be forgiven, but Hannity has proven time and time again that he has the same journalistic standards as teenage Macedonians running rumor mills.