Martha Stewart and Snoop Dogg join forces to fry chicken and mesmerize viewers, and it's a good thing. Sort of. 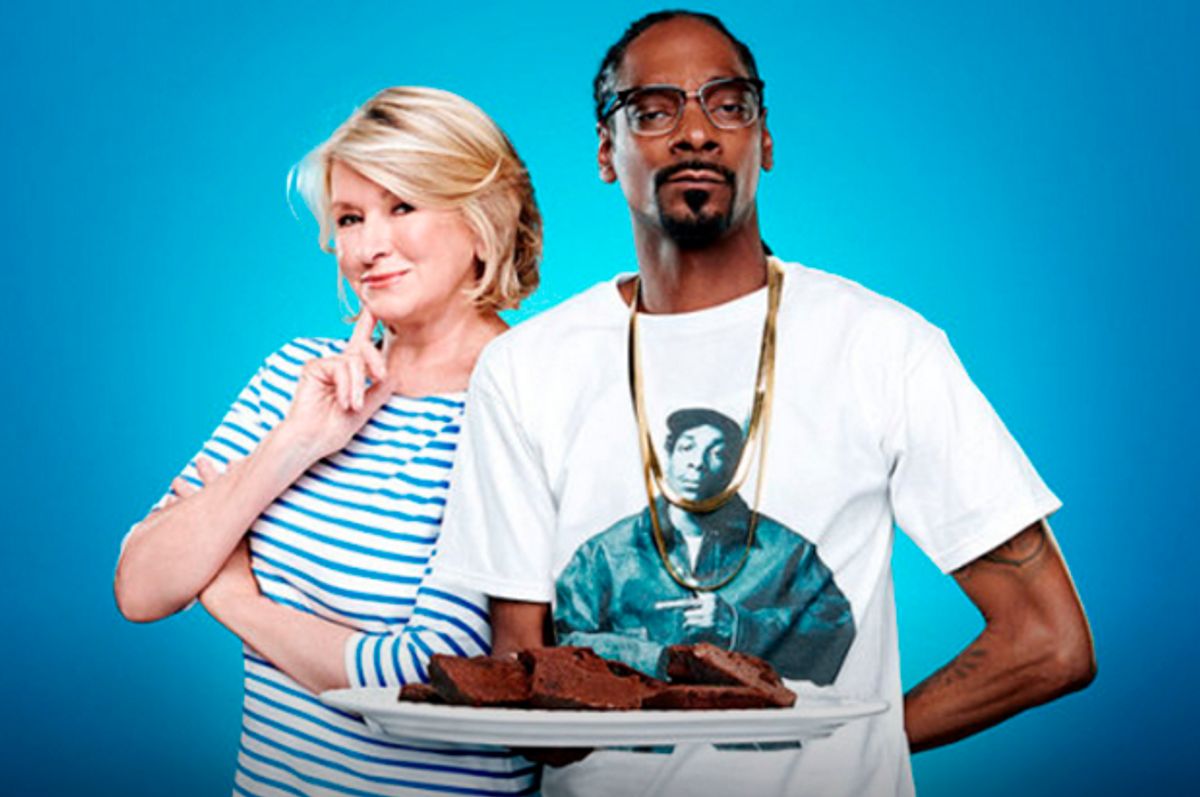 Sometimes show business creates unpredictable magic that simply will not be denied. A type of enchantment that defies reason and logic, yet is so ferociously genuine that the audience doesn’t only want to be seduced by it; it craves its thrall.

The nature of the spell that conjured the unlikely friendship between domestic diva Martha Stewart and hip-hop legend Snoop Dogg remains a mystery. What we do know is that their affectionate bond was forged backstage at “The Late Show with David Letterman” way back in 2008 and has held strong to this very day, culminating in a VH1’s “Martha & Snoop’s Potluck Dinner Party.” There is no reason for this show to exist and yet, to our eternal delight, it does.

Premiering it on Monday night at 10 p.m. is an act of public service on the part of VH1. At the end of our spending several months in a cruel, nerve-wracking limbo of wondering what else could possibly go wrong, here at long last is something that feels oh so right. Don't you dream of savoring Seth Rogen’s utter confusion at taking part in something that, on the face of it, makes exactly zero sense? Don’t you want to watch America’s straitlaced auntie stiffly flirt with Wiz Khalifa? We’ll just answer that for you: Yes, you do.

“Martha & Snoop’s Potluck Dinner Party” isn’t brilliant television by any definition. Without the allure of its hosts — not to mention fearless riffing from Rogen and later Ice Cube — we might not even call it watchable.

It is, however, an admirable act of strange and uncomfortable TV sorcery, an example what would happen if some wizard’s apprentice mixed two disparate ingredients together and, instead of their exploding in a blaze of green fire, accidentally created a fragile test tube hippogriff. Said creature doesn’t possess the fortitude to make a long flight, but for a thrilling joyride to the drive-through, it'll do.

The premiere opens with a fried chicken cook-off, which not only allows Stewart to show off her superior fry skills but gives her an opportunity to crisply enunciate while saying the word “cockfight.”

Stewart wouldn’t sign on to a show like this without actually presenting viewers with useful information, and it is possible to learn valuable cooking tips and a little food history while watching its opening hour. But — call this a crazy guess — I suspect the percentage of viewers tuning in to learn the benefits of brining or realizing a perfect golden crisp on their drumsticks is probably close to . . . hmm, nobody.

But if you’re hoping “Martha & Snoop’s Potluck Dinner Party” includes a shot of the King of Kush and the Queen of Cuisine passing the pipe and giggling as Stewart recalls fond memories of her farm, Turkey Hill, forget it.

Stewart still has an image to maintain, and while marijuana culture is mainstreaming quickly, she still depends on the uptight Burberry set to buy some of the 87 cookbooks she’s published. Too bad; I was really hoping we’d be treated to a step-by-step guide to making a bong out of a depression glass vase. As for special brownie-baking tips, the duo covered that years ago.

Anyway that’s not really why a show like this exists — for “Martha & Snoop’s Potluck Dinner Party” is as much as an odd couple culinary vaudeville act at as it is an image makeover for both the rap mogul and the domesticity empress.

The mostly open secret about Tha Doggfather is that he’s actually quite the connoisseur of all things luxurious and graceful, which he and Stewart proved in nailing a lightning round in an episode of “$100,000 Pyramid.” This has nothing to do with their new VH1 show but we’re including it nevertheless because you deserve a moment of Zen.

So it should not shock anyone that Snoop is as familiar with the kitchen as he is with the mysteries of linens and things.

For her part, Stewart has entered something of a “grand dame” phase in her career. Though she launched an empire and inspired an entire genre of food and craft-centric television, her appeal has been waning. Stewart’s publicly traded company Martha Stewart Living Ominimedia suffered declining sales from 2007 onward before being bought out by Sequential Brands Group in June 2015.

In contrast, Snoop — something of a hip-hop statesman himself these days — has only begun to expand his cannabis lifestyle brand Merry Jane (which co-produces this show alongside Sequential). Partnering with Stewart enables Snoop to add cachet to Merry Jane. And for Stewart to join forces with Snoop helps her introduces a fresh version of herself — the woman who stopped giving an artisanal fudge years ago — to a new customer base.

And this Martha Stewart is secure enough in her authoritarian image that she invites Snoop and his guests to skewer her adherence to etiquette and perceived snobbery. Following the announcement that Rogen and Khalifa would be the taste testers for the fry contest, Martha leans over to Rogen and says, “I have to win. I can’t lose to the 'hood.”

“Give the 'hood a break, Martha!” Rogen replies.

The King of Kush and the Queen of Cuisine, as they refer to themselves, are engaging in a sort of temporary insanity that television sets loose upon the world from time to time. The pair has a tremendous chemistry once they move beyond reading stilted dialogue off the teleprompter, a type of peanut oil and Perrier concoction that leads to some humorous exchanges that flirt with offensiveness.

Stewart gamely interacts with Snoop as if she were playing around with a mischievous nephew, while Snoop and their guests openly ridicule Stewart’s most fastidious practices — like always having a bowl of chicken marinating in saltwater standing by  in her refrigerator. You know, just in case she and one of her fellow billionaire pals are struck by a case of the munchies.

Feel free to read into the awkward race and class dynamics present in “Martha & Snoop’s Potluck Dinner Party.” They’re there to goad us, clearly. Stewart and Snoop brazenly throw them in our faces, to the extent that at some points they seem to be all but baiting the audience. But the hosts also quickly defuse any flashpoint they ignite: Following an explanation of a buttermilk bath in which she marinates her chicken, Martha matter-of-factly remarks to Snoop, “If you took a buttermilk bath, you’d be whiter.”

To which Rogen quickly replies, “If one person knows how to make shit whiter, it’s Martha Stewart,” taking a sharp, “oh-no-she-didn’t” inhale of a moment and releasing it with tension-melting laughter.

People who have never seen these two in action before may end up more bothered or bewildered by “Martha & Snoop’s Potluck Dinner Party.” Even those who welcome the show’s absurdity would be right to question its sustainability. But as a temporary charm, it’s kind of a good thing.