Does the GOP need chemotherapy for its Trump tumor? Sometimes that's worse than the disease

As an oncologist, I took George Will's "chemotherapy" metaphor literally — and the effects can be devastating 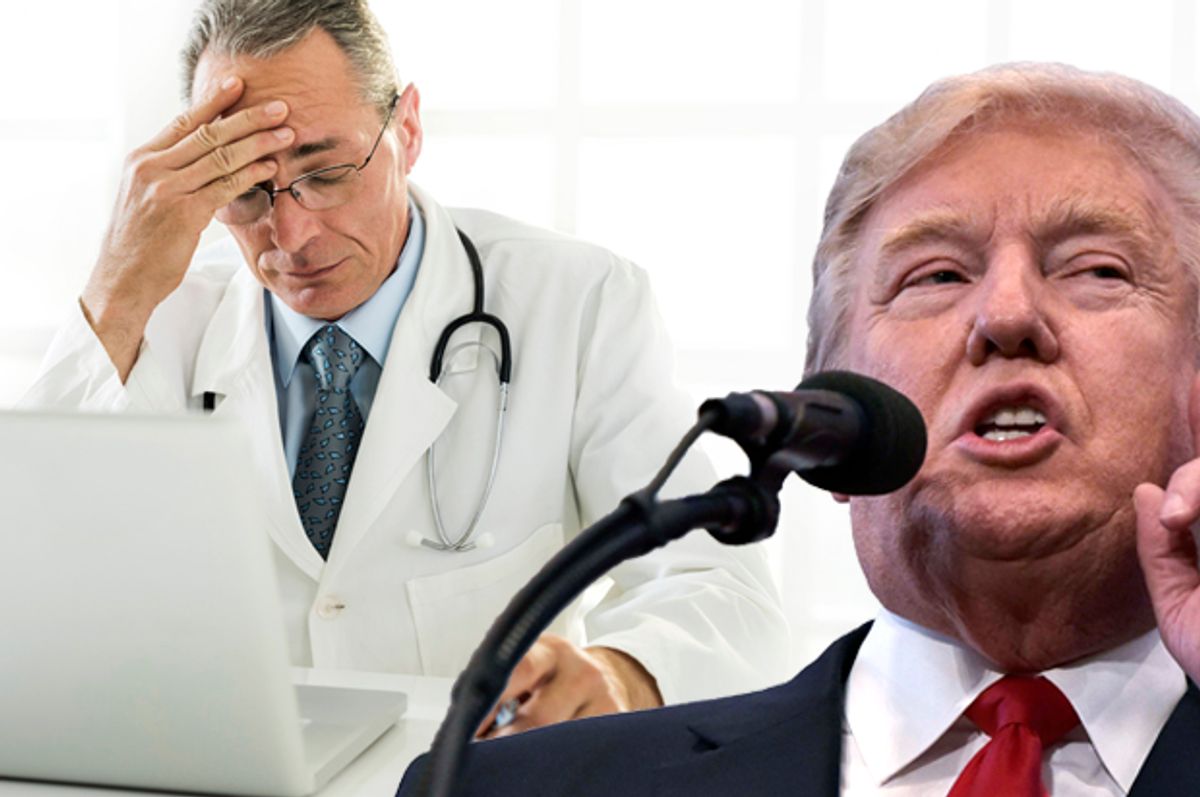 A lot has happened since Donald Trump first announced his desire to become America’s 45th president. He walked into our lives as a mostly benign, personal-brand-peddling reality TV star with an orange hue and hairstyle that seemed more likely to inspire Halloween costumes than votes. Trump’s campaign to become the Leader of the Free World began as a farce that generated spectacular ratings and elicited chuckles as he went rogue and sent the Republican brass into a tailspin.

Early portents of trouble were dismissed in favor of the entertainment on display as Trump mocked and jeered his Republican opponents. He was good for the media’s bottom line and lots of fun on social media. Little else seemed to matter.

At best it was all a guilty pleasure, and at worst it seemed a fleeting nuisance.

But somewhere along the way, Trump’s presidential prospects became real and he redoubled his lifelines: hate and fear. The spectacle truly became malignant as few groups or individuals were spared from his rage, petulance, vindictiveness and conspiracies. And Donald Trump was, in the words of the New Yorker’s Adam Gopnik, finally exposed for what he always was: “a bad man."

Regardless of the result on Election Day, we know Trump has emboldened racists, bigots and fascists of all shapes and sizes. This is the reprehensible gift that will undoubtedly keep on giving. Any doubts should have been removed when the KKK’s newspaper officially endorsed him.

If Trump loses, the Republicans must decide on what to do with those he has incited. Do they continue to serve his patented form of putrid swill to keep the white supremacists and nativists interested, or will they expunge these elements from their ranks by practicing a form of enlightened politics that is undergirded by greater intellectualism, tolerance and understanding?

In an effort to probe the question above, conservative commentator George Will recently argued that “Trump is the GOP’s chemotherapy, a nauseating but, if carried through to completion, perhaps a curative experience.” According to Will, Trump’s failed candidacy is valuable because it may teach the GOP, during its "post-campaign autopsy," that “it is imprudent to nominate a venomous charlatan." Seen through this lens, abhorrent individuals like Trump and his ilk would never find oxygen again in the Republican Party after this calamitous election cycle.

But Will is mistaken.

As an oncologist who administers chemotherapy daily to my patients for various cancers, I can say with certitude that the drug is often indiscriminately destructive. The poison ravages the human body and leaves toxic side effects, even if it sometimes combats cancer cells successfully. People are rarely the same after they have received the drug, and sometimes they are rendered unrecognizable.

If chemotherapy is given to someone already frail and vulnerable, as the Republican Party surely was after immersing its hands in the murky waters of racism, bigotry, anti-intellectualism and obstructionism long before Trump came along, it can be deadly.

Most pundits foresee a Marvel Comics-style civil war for the GOP’s soul on the horizon. Some Republicans (Paul Ryan, Marco Rubio and Ted Cruz) who are expected to be at the vanguard of this movement to expel the darkness from their party, however, have displayed a craven indifference in their efforts to accommodate Trump’s acolytes. These are voters they need, after all, in their perpetual struggle to realize a small government that reduces taxes and dismantles social programs. This, in their eyes, is how to make the Republican Party great again.

As Jonathan Chait writes for New York magazine, the Republican Party is "more unified than one might imagine, as well as more dangerous. The accommodations its leaders have made to their erratic and delirious nominee underscore a capacity to go further and lower to maintain their grip on power than anybody understood.”

This dangerous accommodation has been achieved through endorsements of the demagogue and a refusal to categorically repudiate him. Trump has been the beneficiary of all this, despite ridiculing Cruz and Rubio in the primaries and repeatedly berating Ryan as a weakling.

The embrace is unsurprising to Harvard economist and former Treasury Secretary Lawrence Summers, who argues that the problem is with Donald Trump as the messenger, and not with his message. According to Summers, the ideas will endure.

If you look at past demagogues who strike a chord, the normal experience is that the chord once struck continues to resonate even as the striker of the chord fades into the dust. I think it’s a serious mistake to think of this as a passing aberration that will leave the scene with Trump. The most likely thing to happen is that he’s going to lose this election by seven or eight per cent, and it’s going to be easy for people to convince themselves that his personality cost him ten points. So, they’re going to say that his ideas were basically winners.

Evan Osnos rightly notes that Donald Trump’s platform, to the extent he has one, “will remain on the field of battle for the next generation of political figures to recover, refashion, and redeploy in a subtler, more palatable form.” Trump has pushed the GOP further into the abyss with his racism, xenophobia, Islamophobia and misogyny. The voters he has lured will only be welcomed by future candidates who aspire for office. He has all but destroyed the Republican Party by promoting intolerance, jingoism and exclusion in our increasingly cosmopolitan world. Sometimes, as George Will may soon learn, chemotherapy carried to completion can be crippling, or even fatal. He should hope that Donald Trump isn't that kind.