Inside the "Twitter for racists": Gab — the site where Milo Yiannopoulos goes to troll now 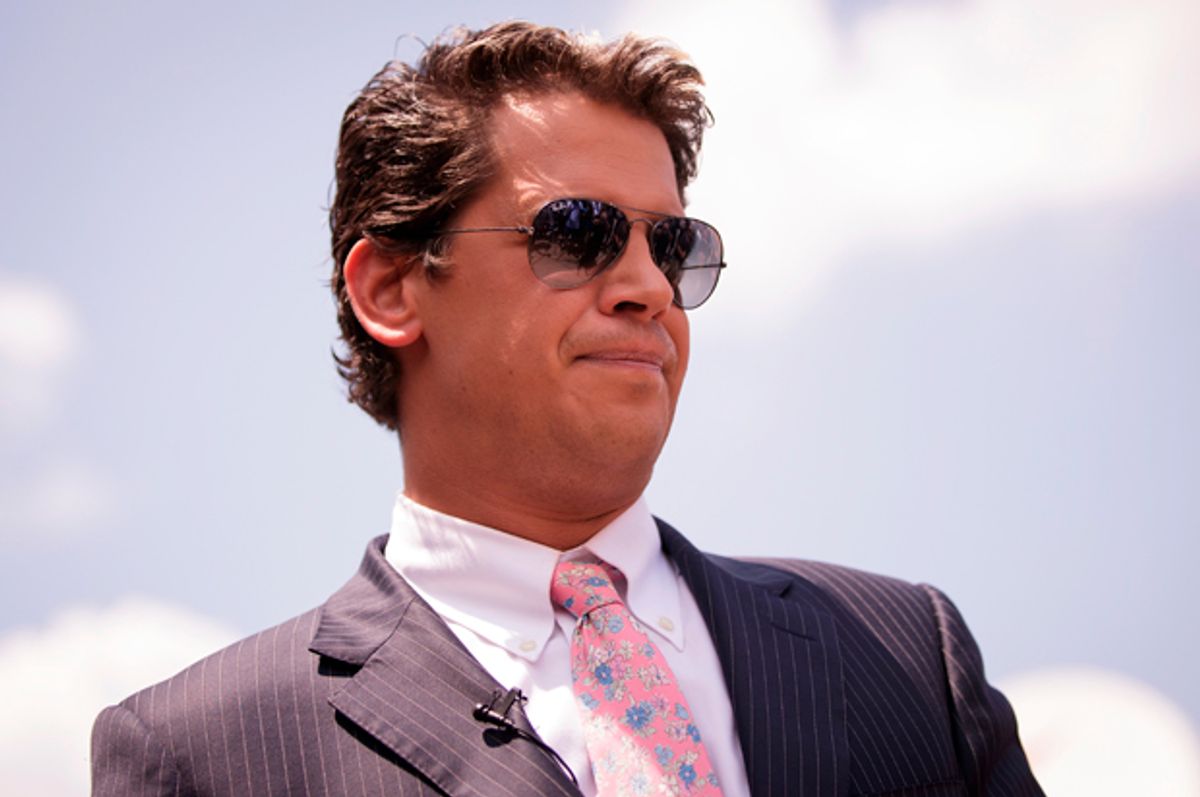 When I heard about Gab, what some are calling “Twitter for racists,” I knew I had to go take a look. Not because I'm racist, but because I'm always curious what ideas lurk in the darker corners of the Internet — and because I heard that Milo Yiannopoulos, who was permanently banned from Twitter for his racist abuse, had resurfaced on Gab.

Go to Gab.ai (the domain ".ai" signifies it's hosted in Anguilla) and you'll find a social media platform where users are encouraged to “speak freely.” The idea is that many Twitter users have been kicked off the platform for harassing people or writing unsavory things, so those kinds of people wanted a place where anything goes. As you can imagine, Yiannopoulos, the famed troll, already has a profile and thousands of followers on this site. He was up to his usual offensive ways.

I signed up for Gab last week, and I've been exploring it since. In order to get the most genuine experience, I didn't give my full name, and I didn't let anyone know I'm a left-leaning journalist. I know exactly how Trump supporters treat me on Twitter, so I didn't need to go replicate that on another platform.

My initial experiences were actually quite pleasant. Users welcomed me to the site, and though I was seeing conspiracy theories about Hillary Clinton everywhere, I wasn't seeing much sexism or racism being expressed.

Gab has a trending section, which is filled with trending terms like #MAGA, #Trump and #CrookedHillary. I surfed these trends and came across some mild sexism, but it wasn't anything I haven't seen on Twitter. That said, Hillary Clinton is regularly called a "cunt" on the site. For better or worse, I feel as if I began to understand some parts of Trump's following by interacting with them under the veil of anonymity. Instead of accosting them like I might on Twitter, I would simply politely ask them to explain why they felt a certain way about Clinton or Trump, and I would usually get a somewhat reasonable response. The response was often dripping with political ignorance, but you could see how they came to their conclusion. I wasn't seeing the "Mad Max"-style dystopia I had been promised this website would provide.

It wasn't until I started surfing some of the more controversial hashtags and started watching how certain users speak to each other that I found the beasts hiding in plain sight. Tags like #WhiteGenocide, #AltRight and #AltWhite were filled with racist vitriol.

When I questioned a user who was posting on the racist hashtags frequently on why something like diversity is a bad thing, another user chimed in to enlighten me.

“Diversity is bad for nobody - except for Whites. Africa for Africans, Asia for Asian, Europe for.. everbody? [sic] Never have we witnessed more rapes and injustice done by brown against whites. Europe is suffering from mental illness (lefties) and diversity,” the user wrote.

I also came across a post where someone said that if you “let in even ONE breeding pair of Muslims or black Africans, you'll be outnumbered over night.” Alright then. It is undeniable that Gab is a breeding ground for this kind of thinking, and who would expect anything different. When you start a social media website based on the idea too many people are being censored by other social media sites for being offensive, you're going to get a lot of offensive people. I'm a free speech advocate, so I say let them have their place there.

After exploring the site for days and noticing how saturated it was with pro-Trump statements, I started to wonder if the founder had intended on it being a Trump wonderland. I found Gab founder and CEO Andrew Torba's profile on the site and asked if he supports Trump. I also asked why the Gab logo was a frog, because I suspected it was a reference to Pepe the frog.

“Yes I am a Trump supporter,” Torba wrote me. “The logo is a frog for these reasons: 1. Exodus 8:1-12 2. Psalms 78:45 3. Frogs have many symbolic meanings including cleansing, healing, renewal, rebirth, fertility, abundance and metamorphosis.” Those passages from the Bible reference frogs being sent by God to punish people, so there you have it.

Upon doing some research, I learned that Torba is a conservative who was sick of seeing social media censoring conservative news sources and user accounts. He claims Gab has tens of thousands of users, and the only restrictions on speech are: “no illegal pornography, a zero tolerance policy for promoting terrorism or violence, and users are not allowed to post other’s confidential information without their consent,” he told Breitbart earlier this year. Gab was launched in beta in August, and it has caused little controversy so far but has surely inspired many catchy headlines.

Gab is certainly a place you can have a genuine conversation that is completely free of sexism and racism, but it is also a place where you're more likely to stumble upon sexism and racism. The people running the site seem to have good intentions, and many of the users are actually quite interesting. It seems likely the site will fade into obscurity if Trump loses, but we'll have to wait and see — it could be that a Trump loss makes Gab more vital. Trump may be a disaster when it comes to supporting the First Amendment, but it seems many of his followers are determined to protect at least some free speech.