"Screw You, Taxpayer!": A close read of the most conspicuously Canadian "Kids in the Hall" sketch ever

Everyone's a winner in "The Kids in the Hall" drinking game, but this sketch is the key to nailing every drink 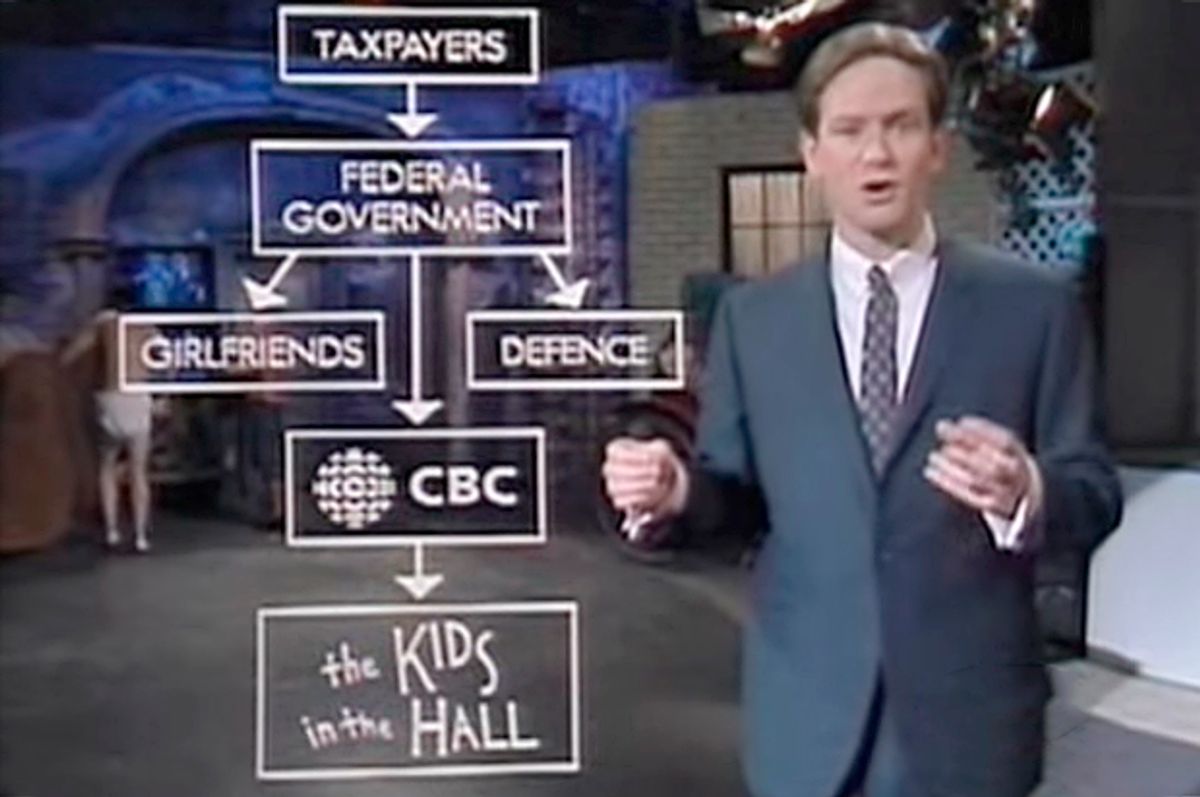 Here is how you play "The Kids in the Hall" drinking game:

This drinking game was first introduced to me by my friend Phil. Phil is an American by birth, though his diehard appreciation for the Kids in the Hall makes him, to my mind, something of an honorary Canadian.

When Phil and I would sit around drinking, watching "The Kids in the Hall," and playing this game, the rule we’d most quibble over was number five, the “conspicuously Canadian” one. As it turns out, what constitutes “Canadian,” let alone “conspicuously Canadian,” is wide open to interpretation. These are the sorts of lively debates that are encouraged while watching an old sketch comedy program and crushing beers in a friend’s apartment.

See, for Phil, “conspicuously Canadian” meant, like, someone wearing a Toronto Blue Jays sweatshirt or a mention of Winnipeg or a stubby bottle of Molson Canadian. For me, it also trickled into the jokes of the show itself. I always thought the first-season sketch about construction workers scamming the welfare system, “daydreaming about a disabling but noncrippling injury,” worked as “conspicuously Canadian” in its function as a cynical send-up of the social welfare state. Likewise, something like the late-second season sketch “Screw You, Taxpayer!” which assaults the public funding structure of the CBC, is totally Canadian, albeit in a way that may not make much sense to an American.

If there’s one sketch I’d point to and say, “This is the definitive 'Kids in the Hall' sketch,” it’d probably be “Screw You, Taxpayer!” It starts like any other comedy sketch, to the point that it immediately seems like a dopey send-up of the Idea of a Comedy Sketch. A buttoned-down couple (Thompson and Foley) are sitting at a supper table, drinking coffee. The doorbell rings. It’s a well-dressed suitor (McKinney) arriving to take the couple’s daughter, Karen, on a date. The problem? He’s late. Very late. Karen has been dead for two years.

McKinney begins making apologies for his tardiness, blaming “rickshaw trouble,” at which point the camera cuts to McCulloch, dressed as a crass embodiment of East Asian stereotypes, right down to the Fu Manchu moustache. “Don’t blame me,” McCulloch pleads, in a mawkish, racist “Engrish” accent. “I stubbed my toooooooooe!” Undaunted, McKinney takes the girl out on a date anyway, cheerily carrying her urn out of the house. “Karen!” he exclaims, eyeing the jar. “Hubba hubba!” Then, for no real discernible reason, the camera cuts again to Kevin McDonald, sitting in a high chair, wearing a diaper, making baby noises while smashing a spoon into a bowl of cereal.

Then things change. McKinney steps out of the sketch, dropping his character and assuming the role of himself—or a version of himself; you know the deal. “Wow,” he says. “What a bad sketch. And in such poor taste, too. You know, we’re gonna get a lot of telephone calls and letters about this one. And why not? Every Canadian has a right to complain about that sketch because every Canadian owns a piece of that sketch!”

McKinney then proceeds to show a flow chart explaining how the CBC’s government subsidy works and how Canadians pay into the public broadcaster responsible for showing such a bad, tasteless, racist — but most of all stupid — piece of sketch comedy. “You see,” he continues, “your tax dollars feed into the government, which in turn mandates the CBC, which in turn provides funding both whole or in part to shows such as ours. So like a cup full of water poured into the ocean, the atomic parts of your tax dollars mix with the whole and wind up providing for the budget of this show, for the budget of that sketch, and for this piece I’m doing now, which we like to call—”

And then the studio audience joins him in an enthusiastic cry of: “SCREW YOU, TAXPAYER!”

“That was controversial on both sides of the border,” McKinney tells me. “One: at the CBC, I think it made them nervous. And we had to fight with HBO to get them to show it. They thought people wouldn’t understand that in America.”

The sketch’s inimitability, the way it knowingly plays to a given audience segment (i.e., Canadian viewers watching "The Kids in the Hall" on CBC) while so uncaringly excluding another (i.e., American audiences watching the show on HBO or, later, on CBS) sort of sums up the Kids’ whole approach to comedy. They play to the people who get it, and to hell with the rest. They’re undeniably, unabashedly cult. McCulloch likes to say of the troupe, “Everything we touched turned to cult.” It may be true. But it seems just as true that pretty much everything the "Kids in the Hall" did was cult by design — built to appeal to a core base while willingly alienating anyone else. But most of all, it always seemed like the Kids were willing (maybe too willing) to alienate, annoy, or straight-up piss off the people holding the purse strings: the dopey suits at the Canadian Broadcasting Corporation who dared to meddle with their refined idea of comedy.

Thompson says that the troupe was constantly getting anxious notes from the CBC, fretful about one or another sketch or character or idea. But with the veteran Lorne Michaels in their corner, the Kids were able to push a lot of their ideas — including ideas like “Screw You, Taxpayer!” which undermined the legitimacy of both the network itself and (in a way) the entire nation of Canada — onto the air.

“We had an American hammer to smash them with,” he remembers. “You needed an American hammer. It’s such a sad statement about Canada. It’s such a colonial way to behave. We were formidable when we were together . . . We were constantly being monitored. Constantly being censored. Constantly being advised not to do things. But a lot of the time, we’d just pretend [to agree], and we’d just do it [anyway]. The truth is, a lot of those fights were fun. I like a fight. We knew we were doing something different. We had a real punk sensibility.”

That sensibility infected everyone working on the show. Kelly Makin,5 who was brought in to direct the show’s short film segments for the third season of "The Kids in the Hall" (and who later directed the Kids’ feature film), remembers the period fondly. “It was an amazing production to work on,” he says. “Being under the umbrella of Broadway Video, and [with] Lorne Michaels involved, CBC was always supportive. They wanted to do something different. We weren’t necessarily protected. We certainly had to fight to get stuff on that they thought was too far. But they were excited and supportive of the show. And the Kids themselves were a pretty powerful, strong-willed unit together. I wouldn’t say we had carte blanche, but it was a very exciting playground for comedy. We were doing so much stuff at that time.”