Trainspotting, an inside job

Director Adam Irving explores the life of the New York City subway's Frank Abagnale Jr. in “Off the Rails" 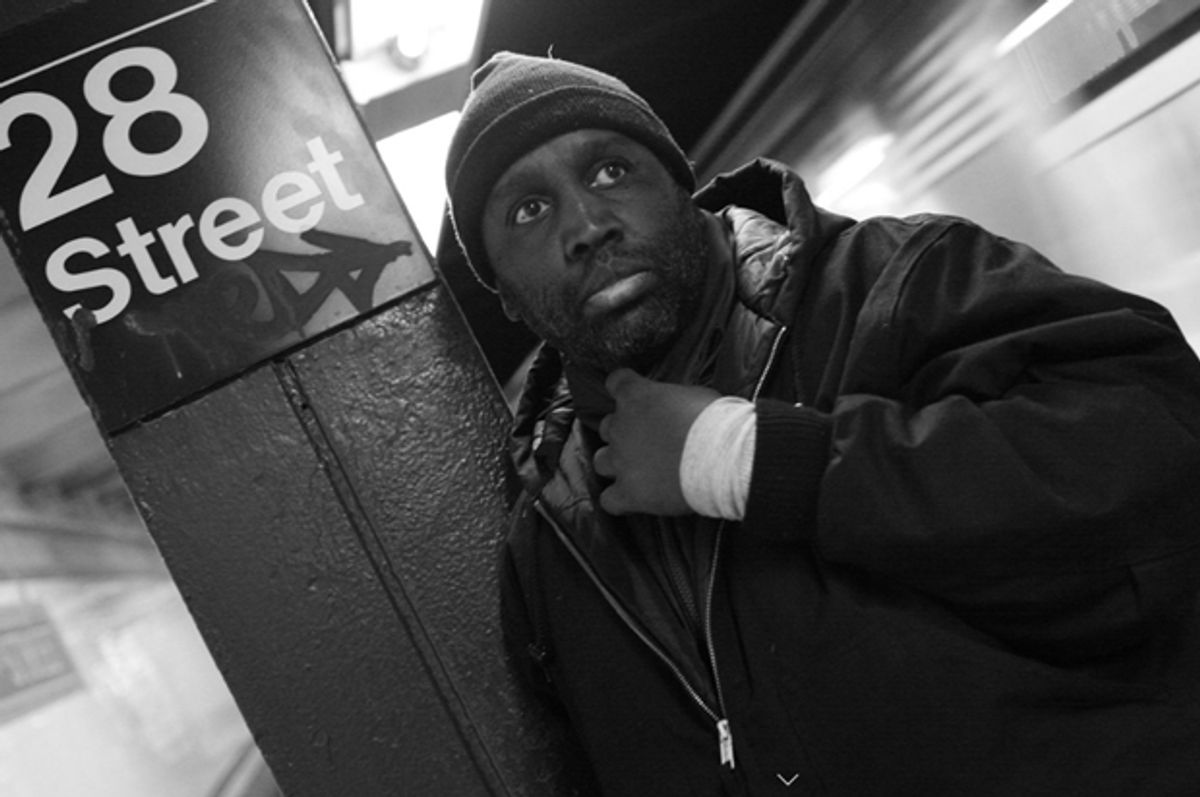 As a teenager, Darius McCollum, the subject of Adam Irving’s fascinating documentary, “Off the Rails,” felt the New York City subways provided him with a safe space. And since age 15, McCollum has been impersonating MTA subway conductors, ticket booth staff, bus drivers and station personnel.

He knows the lingo, has the uniforms and has collected 140 keys to various MTA towers and facilities. While he may be more knowledgeable than most transit workers, Darius McCollum is not an MTA employee. As such, for more than 20 of his 50 years, he has been in jail for hijacking trains and buses. The notorious “transit bandit” has his picture hanging in every station as a warning to employees and the police.

Irving’s poignant, sobering film does not portray McCollum’s antics as amusing or dangerous but more like the story of an addict who can’t help himself. What “Off the Rails” does show is how someone like McCollum, who has Asperger's syndrome, has been failed by the system and society.

In the film when he is released from jail, he struggles because has no real job skills and no routine. Despite his encyclopedic knowledge of the transit system, the MTA refuses to hire him. He repeats his offenses and receives longer jail sentences as dictated by criminal guidelines. He may be his own worst enemy — he seems to enjoy the media attention at each arrest — but maintains he is happiest riding the rails (even as a passenger). He also has a deep love for his long-suffering mother, who writes him letters in jail and hopes for the best for her son.

Irving chatted with Salon about McCollum and what prompted him to tell his unusual story.

How did you learn about Darius, and what made you think there was a film in his story?

I read his Wikipedia page when I was looking up something else on rail buffs. So I came upon his page, and it read like a log line for a movie:

"Darius McCollum (born 1965) is a New York City resident with a lengthy arrest record for crimes related to the transit system operated by the New York City Metropolitan Transportation Authority (MTA). He has been fascinated with trains since his childhood, and has been diagnosed with Asperger syndrome."

He wasn’t a terrorist. He didn’t take anyone’s money. I love crime stories, stories about imposters and stories about New York. It reminded me of “Catch Me If You Can.”

How long did you work with Darius to tell his story?
The actual filming was about two years with him being in and out of jail. I was actively working on it for three years, but I’d filmed him for only 25 days. I’d get him for three days, then he’d get arrested, or I’d get him for a day while he was in jail.

Darius says he’s “good with trains but not with people.” How did you get him to trust you to tell his story?

He’s very big on attention and doesn’t need trust to stimulate his ego. He’s on board with anyone who wants to do an article or play or film about him. That makes him feel good and gives him value. To get him to open up deep — that’s harder. He is logical and he gives answers with numbers. But when you ask him, "How did you feel when you were put in solitary?” he’d say, “Feel . . . I don’t think about that.”

That’s hard for people who don’t have Asperger’s, so I had to train Darius to tell his story in a neurotypical [or non-Asperger’s] way. We exchanged hundreds of letters from the fall of 2012 to the spring of 2013 when I started filming him. I’d write a letter from Los Angeles and it would take a week to get to him in New York jail. Then he’d take a week to write back. So it would take two weeks for me to get an answer from him for a question like “What’s your favorite ice cream flavor?”

There are many home movies of young Darius riding the rails as well as re-enactments of his driving trains as well as animation and interviews plus observational footage. This is a story about family, crime, Asperger’s and the legal system. Can you talk about how you constructed the film and its various elements?

For me the layers are what makes “Off the Rails” go from a small, character-driven film to an advocacy film without it being an issue-oriented film that hits you over the head about a broken system. You learn about the [broken] system through a person. I wanted that approach to be mirrored visually, with small and big details.

I used archival news footage and animation — which had to be constructed from scratch based on Darius’s stories — because it’s the only way to get inside his head. His words are literal and unemotional, so the visuals need to capture the fantasy world, his sanctuary. That’s what those visual achieve.

Your approach jumbled the chronology, jumping back and forth between childhood and adulthood, and in and out of prison. Was that also part of the narrative strategy?

The film’s timeline is confusing, but in Darius’s head it’s all the same. He needs a routine whether he is on the trains or when he’s in jail. In jail, he can depend on routine even though he doesn’t have freedom. He’s unhappy when he’s a free man not on a train. That’s a world that is unfamiliar to him; it has no guaranteed schedule or structure. One of the things I struggled with my editor [about] was do we want to tell the story in order, where it’s clear?

In the end we thought it would be interesting to go back and forth to see him like an adult and that he’s in prison now. There’s a backstory how he got there. But for most of the story he tells, it is from a jail cell. I wanted it to feel like a live case, and in the end you find out what happened.

Darius has a very special relationship with his mother. What can you say about it? Their letters back and forth in prison in the 1990s are heartbreaking.

In the film you see so many systems that fail Darius, the schools, the courts and other systems. But the only one that didn’t is his family. I wanted audiences to feel the longing. You feel for Darius and want him to be reunited. She’s his rock and that keeps him going.

How would a mom react to a son being arrested 32 times? She still loves him. She wrote him letters for many years. She wrote, “I’m done with you” and then two weeks later, she wrote him, ”I’ll always be here for you.” Those letters were so emotional.

He wrote the same thing, “I miss you; I love you; I’m scared” when he was a teenager and when he was 50. To me, that was heartbreaking.

Why do you — and by extension, viewers — have sympathy for Darius? He is a lawbreaker, but watching your film we just want him to break the cycle.

No one has a problem with there being a law against driving trains illegally, but the sentences are too harsh. The punishment is five, 10, 15 years in maximum-security prisons. But Darius has more experience than some professionally trained [MTA] union guys because he’s been doing it for 35 years, even though his work is patchy [between jail stints] and he is not officially trained.

He’s not breaking the law to be evil. He’s more an addict we feel for — that junkie who means well and sees that opportunity, and is having a bad day. He had no role models. He is a well-meaning addict who hasn’t gotten the help he needs to break the cycle. He can control it in some way, but we’re disappointed when he doesn’t. But we don’t hate him. The state should provide him with therapy and treatment and they have not done that.

There are several concerns expressed in the film that Darius is not getting appropriate therapy for his behavior. Yet the film also insists his punishments don’t fit his crimes. Can you discuss this aspect of his case?

Something I learned is that the judge, the district attorney and the parole board do want to help Darius. He is one more $60,000 a year bill for New York taxpayers. They’d love to find a solution, but when a judge sentences him, they have a guideline [for transit crimes]. The next sentence has to be four to six years if the last one was two-and-half to five years. The prosecutor wants to come up with a deal. The state of New York doesn’t have the money to give Darius the therapy he needs.

Most criminals can go once a week [to therapy] to work on depression, but Darius needs 24-hour care. He thinks he can get on the train, so there has to be someone with him to make sure he doesn’t fall into that temptation, and the state doesn’t have the money to do that. They want criminals to be punished.

He knows what he’s doing is wrong. He’s just going to go out and do this again. It’s the biggest injustice. No one is willing or able to follow the guidebook that would solve his problems. It’s a Band-Aid solution [to jail him].

There are observations in the film that Darius enjoys the media attention he received since he was 15 and was first apprehended. Do you think that “Off the Rails” is going to bring him back into the media spotlight and encourage his behavior, even though the film is advocating for him?

In making the film, the positive attention brought to Darius and the case and permanently changing his life [for the better] outweighs the negatives [of his recidivism]. It’s better to show this than have no one talking about him because then he’d be unknown, with no advocates and stuck with his public defender with no one knowing or caring about him.

Why do you think the MTA refuses to hire Darius? Do they fear looking foolish if they “legitimize” him?

It’s too risky — not in the real sense that he will cause a problem. It would be hard for them to get insurance. It would look good in the media for PR, but folks in New York will still see Darius as an off-the-rails kook who must be contained — not rewarded — for breaking the law and getting a cushy job.

And the MTA doesn’t want to reward someone who humiliated them. A bank robber, who repeatedly robbed a branch wouldn’t get hired as a teller there. I couldn’t get the MTA folks to talk to me on camera. But I know that Darius doesn’t follow the rules, and he has had multiple felonies. He would be fine doing one job for 20 minutes. Then he would want to drive a bus. Then he would want to do track repair then security.

He is a systems buff not a train buff. It’s not the thrill of the boy behind the engine. He wants to be “the captain of transportation” under Obama. He even sent a letter listing all the folks who would work under him to the president saying, “Here’s a job that doesn’t exist, and you should hire me!”