What are they thinking? Talking to Trump voters without judgment (and while black)

I used my "black girl magic" to talk to Trump supporters without judgment. Now I'm back on blood-pressure meds 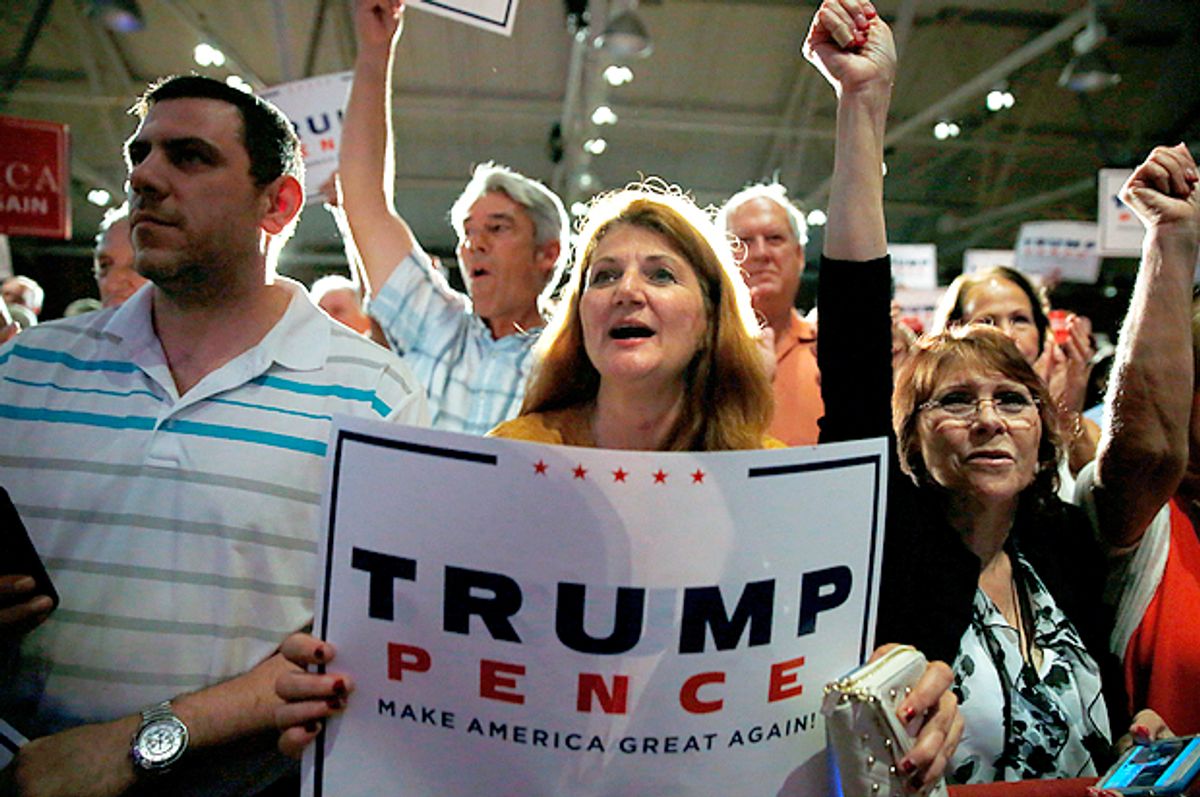 In the 2016 presidential campaign, I have not done well at all. For me it has been a real-life “Rocky Horror Show” that doesn’t seem to end. In listening to what feels to me like irrational rhetoric, my fears have me back on blood-pressure meds. My fears are less about a Donald Trump presidency and more about the people who see him as the Great White (Orange) Hope.

As a woman and a person of color, I have never suffered fools lightly. The things that have me frightened about Trump supporters are my own biases and my ignorance about who they are. It is too easy to peg 40 percent of Americans as crazy, hateful racists and sexists. That is a cheap shot. So I set out to find and talk to Trump supporters in an open and respectful way. I put out the call through social media. The ground rules were simple: I wasn’t trying to prove a point, and I wasn’t going to debate. I was just going to listen.

I interviewed 12 diehard Trump supporters from around the country. I even found a few black supporters. A few asked not to be identified because they feared repercussions from their jobs, their communities and even their families. This is what they wanted me to know:

Donald Trump Was Not Their First Choice

Every person I interviewed went into this campaign with his or her sights set on another candidate, or was undecided among other candidates. Several were as shocked as I was that Trump’s candidacy made it this far against a roster of Republican establishment players.

A 26-year-old male voter says, “Donald Trump was not the groomed choice for the Republican Party. He acquired the nomination through a hostile takeover.” He adds, “It is a system that I think most people would agree is not only broken, but is being raped, and the losers are the American people.”

They Really are Afraid, Mad as Hell or Both

For one reason or another, Trump supporters come across as so damn mad. Their guy’s vitriol and tantrums seem to give them permission to voice their own anger about how things are going in America. They long for the good old days of Aunt Bea, Andy and Opie, whistling down the streets of Mayberry.

Lost jobs, programs that they see as handouts, a black president, open borders (or at least borders perceived that way), the victims of the new heroin epidemic (yes, now they are victims), challenges to their right to have guns -- all those things have Trump supporters on edge.

Several told me that they haven’t felt like their opinions have been heard in a long time. “People keep writing us off as crazy, racist and sexist people,” one woman in her mid-40s who works in public health told me. “That is not what’s happening here. Everybody wants to be heard and understood.”

I get it, partly. I don’t say to her, “I want to be safe, I want jobs that pay a living wage, I want my grandkids to have an excellent education and I don’t like the idea that women out doing their jobs have to worry about being grabbed by their vaginas.”

They Hate Obamacare Almost as Much as They Dislike Obama

The Affordable Care Act has been a thorn in the side of Republicans since it was signed into law in 2010. Many Trump supporters feel that Obamacare is primed to kill off small business, and destroy the healthcare system more generally. And the truth is that it has cost consumers more than was anticipated.

They want to see Trump live up to his promise to repeal it on Day One. While many I talked to have health care through their employers, some are actually covered under the Obamacare exchanges. Some are getting health care through expanded Medicaid. Just saying.

And yes, they really dislike President Obama, and feel that he will go down in history as the worst president in history. He was the wrong man for the job, and he was definitely the wrong black man, if there had to be one. Several said they liked Ben Carson.

“America needs its good jobs that allow people to feed their families back,” one supporter said. ”Trump will bring them home.” Nobody addresses the fact that Trump’s businesses send their manufacturing operations overseas. And because I am not trying to educate anybody, I just listen.

Trump Lives by a Different Code of Conduct, and That’s OK

Donald Trump is a rich old white guy -- and that’s what they do. That’s essentially how Trump supporters seem to understand his numerous acts of alleged sexual misconduct, and the other hateful things he has done. While many Trump supporters see themselves as social and religious conservatives with strong family values, both men and women I spoke to gave him a bad-boy pass. It was like when Paula Deen got caught calling black folks “n***ers,” her supporters wrote it off as an artifact of the time and place that she comes from. In Michigan, where I live, one state legislator said that Trump comes off “a little raw,” and that’s what people love about him.

“I’m not saying that what he said is OK,” she added. “What I’m saying is that the outcry is more a pretense than true protest. The release of the [‘Access Hollywood’] tape was obviously well planned: It didn’t just ‘happen’ to crop up two days before the debate. It was meant to distract voters from real issues and that is what concerns me.”

They Are Not Racists

This was a big one for me. Sometimes I worry that I am going to end up working on a plantation, or behind a wall or in a camp, the way things are going. I have to ask about race. “People try to make us out as crazy rednecks or hood-wearing Klansmen,” a man from rural Ohio told me.

Of course there are some supporters who loudly and vocally declare their racism, or at least their belief in white nationalism. At any rate, it can be said that they enjoy white privilege and aren’t eager to let go of it for any reason. But for the most part nobody wants to be considered a racist. Yet there is real fear about the changing balance of power and privilege in this country.

One person told me he liked the fact that the Trump campaign was working so hard to build a bridge with black voters. “Look at the meetings he is having with the blacks. That’s impressive,” he said.

All of Trump’s speeches around race were given in front of largely white audiences. "You're living in poverty, your schools are no good, you have no jobs, 58 percent of your youth is unemployed -- what the hell do you have to lose?" Trump asked African-Americans, as he stood before an overwhelmingly white audience in Michigan recently.

One black Republican male from Dallas that I interviewed suggested that there were many more black and brown supporters who were embracing Trump than the biased media was covering. He referred me to the Twitter page Blacks for Trump, which is populated with profile pictures and stories from white people.

Hillary Really Is a Nasty Woman

If you follow Nate Silver’s FiveThirtyEight site, you already know that statistics suggest that if only women voted for president, Hillary Clinton would win in a landslide. Yet Trump’s female supporters are some of the most ardent folks on his side. He seems to appeal to women supporters as a candidate who will keep them safe and protect the borders from the bad hombres.

They don’t trust Clinton. And the endless stories about her emails don’t help build confidence with supporters of either gender. Yet when I ask for examples of what bothers people most about the emails, the answers seem to come directly from the Trump playbook. According to Trump supporters, the emails prove that Clinton is funding ISIS, ordered the massacre in Benghazi, is plotting to steal the election and is actually a pimp who procures women for her husband. “It just proves just how nasty she is,” one male voter told me.

When asked about the notion of breaking the glass ceiling by electing a woman to the White House, they all resoundingly said, “Not that woman.” Several women suggested that Sarah Palin, John McCain’s running mate in 2008, would make a great first woman candidate. “She is so much more prepared to serve than Hillary Clinton,” a stay-at-home mom from California said.

They See Themselves as Bootstrappers, and the Rest of You as Freeloaders

“Whatever happened to working hard for what you want?” asked a retired man who had owned and run a family business. He is upset by the level of handouts that he believes are holding America back from being great again. He talked about how hard he worked to support his family. “Why do people think that we owe them anything?” He and several others talked about the disconnects they perceive around higher education and student loans.

“Nobody ever gave me anything,” a man in his 40s said. He talked about how angry it makes him to see people who don’t make it because they don’t want to get a job. “Anybody can get a job if they want one,” he said. Trump supporters believe that those who are unemployed, especially minorities, don’t want to work and need so many services because they are not willing to work to lift themselves up. They talked about the numbers of minorities who receive some sort of public assistance. I don’t think the time is right to say that the largest number of families receiving assistance are white. They wouldn’t believe me. I keep it moving.

Trump Will Keep Us Safe

Like most Americans, the Trump supporters I talked to worry about their personal safety and that of the country. They don’t believe Hillary Clinton can or will protect them. “She wants to take away our guns and repeal the Second Amendment,” said a Michigan man who has several guns, including hunting rifles.

This week my interviews are done. I am exhausted and still anxious. My social experiment of understanding didn’t work. After the election is over, I have to go to the dentist to deal with the molars I cracked from stress-grinding and keeping my mouth shut. I thought I would get them fixed the week after the election, when things settle down. I’m going to wait a bit longer, because I have a feeling things are just getting started.