#NoDAPL is #NativeLivesMatter: The protests at Standing Rock are not only about environmentalism, they're about racism 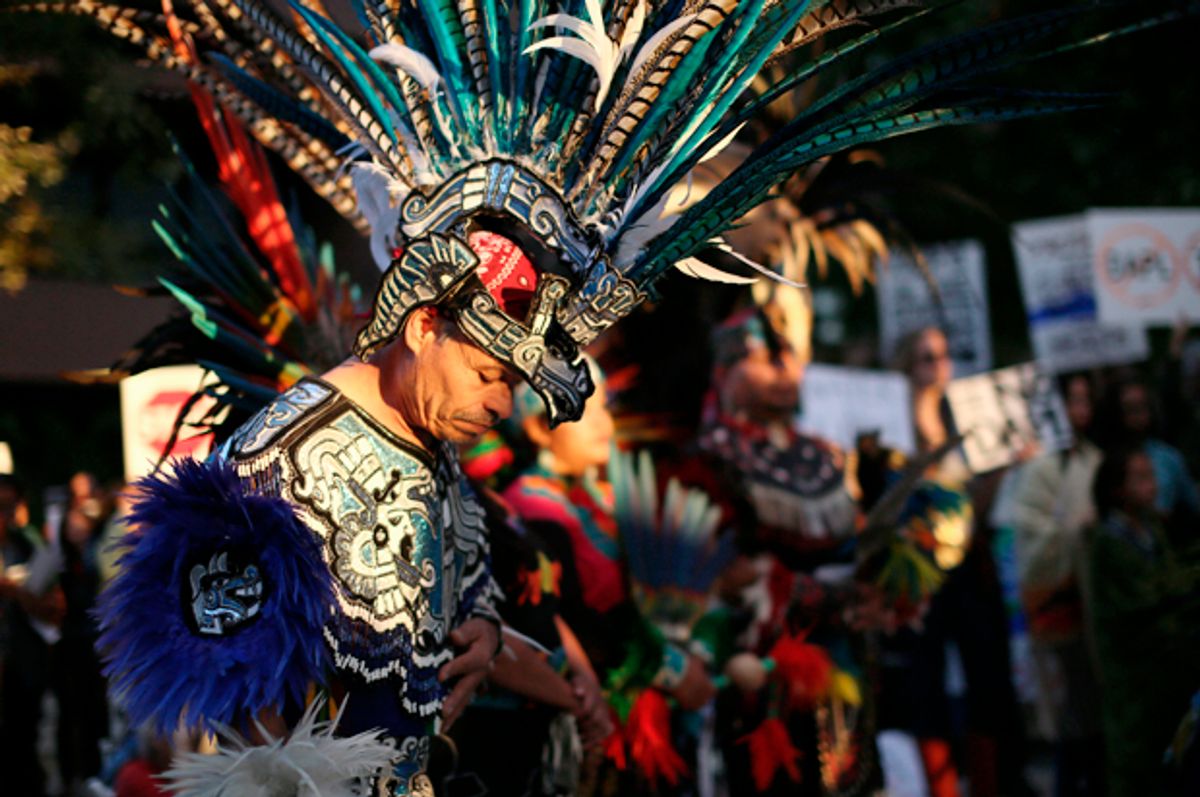 Juan Flores, a traditional Aztec dancer, at a rally in support for the protestors at Standing Rock, North Dakota (Getty/Sandy Huffaker)
--

At around the same time that the Lakota Nation set up the camp of the Sacred Stones to defend their territory from the Dakota Access Pipeline, Republican candidate Donald Trump decided to attack Senator Elizabeth Warren by calling her “Pocahontas.” During a news conference in North Dakota back in May of this year, Trump launched into the first of many “Pocahontas” rants, each of which was designed to mock Warren by comparing her to a cartoon-character-like Native American figure. While Warren countered by calling Trump a “thin-skinned, racist bully,” coverage of the exchange focused mostly on the ways it revealed Trump’s bombastic and bigoted temperament.

But there was something different in the Pocahontas rants, and it’s part of the reason why we have to link the #NativeLivesMatter movement to the events taking place at the Dakota Access Pipeline. The violence surrounding the protests is not only a sign of a militarized police state protecting profit over people, it is a reminder of a long legacy of systemic racism toward the first peoples of this nation.

While Trump has gone after Latinos, immigrants, women, Muslims, veterans, African-Americans, disabled people and “the” gays, he certainly didn’t call up a historical figure from any one of those communities as a way to insult a critic. That Trump could stand in the same state as protests were developing and nonchalantly mock a U.S. senator by calling her “Pocahontas” reveals the ways that the real struggles of the Native American community are ignored while their history is offered up for mocking entertainment.

All of Trump’s bigotry is horrible, but the Pocahontas rants, just like the persistence of a professional football team called the “Redskins,” reminds us that the Native American community suffers a uniquely intense form of everyday racism in this nation.

Trump doesn’t just use the Native American community as a source of mockery.  He is also poised to make money by exploiting it. The Guardian recently reported that Trump has close financial ties to Energy Transfer Partners, operators of the Dakota Access Pipeline, writing “Trump is therefore indirectly linked to Dakota Access, a $3.8 billion pipeline development that will funnel oil from North Dakota to Illinois.” Not only has he invested between $500,000 and $1 million in Energy Transfer Partners, his campaign has received donations from them as well.

The pipeline will send 570,000 barrels of crude oil per day through North Dakota, South Dakota, Illinois and Iowa. The 1,168-mile long pipeline is set to pass through the Missouri River, just upstream of the Standing Rock Sioux Tribe reservation.

The Standing Rock Sioux tribe began fighting the pipeline this spring, arguing that the project was a “death sentence” since it would harm sacred lands and pollute the tribe’s only water supply.  The protests have become increasingly violent. We have reports of water protectors who have faced tanks, militarized police forces, mace, and attack dogs as they've stood their ground in protest of the tar sands pipeline.

While Trump has been busy investing in the pipeline and making fun of Native Americans, Hillary Clinton has largely avoided engaging with the stories coming out of the protests. Despite the fact that the new Democratic party platform states “We have a profound moral and legal responsibility to the Indian tribes — throughout our history we have failed to live up to that trust,” Clinton has preferred to duck the issue.

Environmental activist Bill McKibben pulled no punches when he went after the reasons for her silence: “The people who’ve built Clinton’s campaign war chest and her personal fortune are the same people who paid for the dogs that bit young native Americans last week.”

In classic Clinton fashion, she has refused to openly address the reality of the situation, issuing empty political rhetoric instead of meaningful support. On the same day that there were reports of militarized police forcibly clearing hundreds of “water protectors” from their protest site, the Clinton campaign finally released a statement on the matter that said “literally nothing.” In response to protests staged by indigenous youths outside her campaign headquarters in Brooklyn, the campaign responded with this:

“From the beginning of this campaign, Secretary Clinton has been clear that she thinks all voices should be heard and all views considered in federal infrastructure projects. Now, all of the parties involved — including the federal government, the pipeline company and contractors, the state of North Dakota, and the tribes — need to find a path forward that serves the broadest public interest. As that happens, it's important that on the ground in North Dakota, everyone respects demonstrators' rights to protest peacefully, and workers' rights to do their jobs safely.”

McKibben responded to the statement by tweeting: "Hillary Clinton managed to make a statement about the Dakota Pipeline that literally says nothing. Literally." Others, though, like anonymous Twitter commentator @ActualFlatticus, were outraged at the way that Clinton seemed to suggest that it was the workers who were at risk for their safety and not the protesters.

Between Trump and Clinton we have the trifecta of ways that the Native American community tends to be treated: mockery, dismissal and exploitation. And that is why the Dakota Access Pipeline protests have to be read within the larger context of #NativeLivesMatter.

The increasing violence at the site of the protests is not only a sign of corporate greed; it’s a visible manifestation of the various ways that this nation has attempted to exploit and ignore and repress the indigenous community since the colonial era.

As Lydia Millet explained it in The New York Times, the racism goes far beyond epithets: “American Indians are more likely than any other racial group to be killed by the police, according to the Center on Juvenile and Criminal Justice, which studied police killings from 1999 to 2011… But apart from media outlets like Indian Country Today, almost no attention is paid to this pattern of violence against already devastated peoples.”

A report issued by the Lakota People’s Law Project revealed that:

While we ignore these violent truths, we go on entertaining ourselves with Native American imagery. It’s a disconnect that befalls many marginalized populations, but that affects our nation’s first peoples in uniquely extreme ways. Because America suffers from what Millet calls a “willful blindness” to the realities facing the Native American community, we rarely even make the link between “Indian” sports mascots and the actual community of people that originated those images.

But, as the National Congress of American Indians explains, mascots as well as other stereotypes have very real consequences for these communities: they “perpetuate negative stereotypes of America’s first peoples, and contribute to a disregard for the personhood of Native peoples.” In fact, it is just those same attitudes that contribute to the ease with which the concerns of these communities can be dismissed and violently repressed.

McKibben explains that the way that the Dakota Access Pipeline is being shoved down the throats of the Native American community is just “the next chapter in a very old story — 500 years of broken promises.”

While the images emerging from the protests of water protectors hounded by ferocious dogs, of people corralled in cages, of mass arrests and riot gear, remind us of a long legacy of civil rights struggles in this nation, there is a deeper wound taking place here. One that takes us back to the founding violence of this nation.

Scholars have debated whether or not to describe the reduction of the indigenous population as a genocide, but the fact remains that between 90 and 95 percent of the population and possibly as many as 18 million people died. And while some dismiss those high numbers as the unfortunate consequences of disease brought by the Europeans to the Americas, there were no less than 40 wars waged against Native Americans prior to 1894 and there is significant evidence that disease was used as a weapon of war.

This is why we can’t understand what is happening in North Dakota if we erase the truth of the past.

After 1830, Native Americans were confined to reservations — a mode of segregation that rivals South African apartheid in cruelty and hardship. But all of that history is forgotten as we ponder this new pipeline, which is set to dissect the exact land that the Sioux were told to confine themselves to. As they fight to protect their lands and their water, they are dismissed as a nuisance and disappeared to make way for the sort of “economic progress” that both candidates tout.

McKibben explains that the Great Sioux Reservation was formed in the 1860s and over time shrunk again and again. Then in the 1950s and '60s, the Army Corps of Engineers — the same Army Corps now approving the pipeline — built five large dams along the Missouri, forcing indigenous villages to relocate. More than 200,000 acres disappeared beneath the water. In 1980, a federal court said, of the whole sad story, “a more ripe and rank case of dishonorable dealings will never, in all probability, be found in our history.” That, of course, was before the Dakota Access Pipeline came on the scene.

The outpouring of solidarity and support, from across the nation and the world, is a sign of the potential to take this outrage and turn it into possibility. The #NoDAPL movement has brought together environmental activists and those struggling for a #NativeLivesMatter movement. And while we can hope and struggle to make sure that these efforts have a positive outcome, we can’t lose sight of the larger picture that links the systemic racism, the corporate greed and the American exceptionalism that have all combined to make the situation at Standing Rock so dire.

The painful reality is that the existence of Native Americans has always been a thorn in the narrative of the founding of this nation. We want our story to be the one about “the city on a hill” not the “trail of tears.” Now the #NoDAPL protests and the violent response to them is making that historical myopia impossible to sustain.

So as we gear up to feast over Thanksgiving we have a choice: We can take seriously the idea that #NativeLivesMatter or we can continue to consider the indigenous community as an object that we can alternately consume, ignore, mock and exploit.