View from Canada: Your elections are too damn long!

All of Canada complained aboot the endless 2015 election campaign -- which lasted 78 days. Ha! 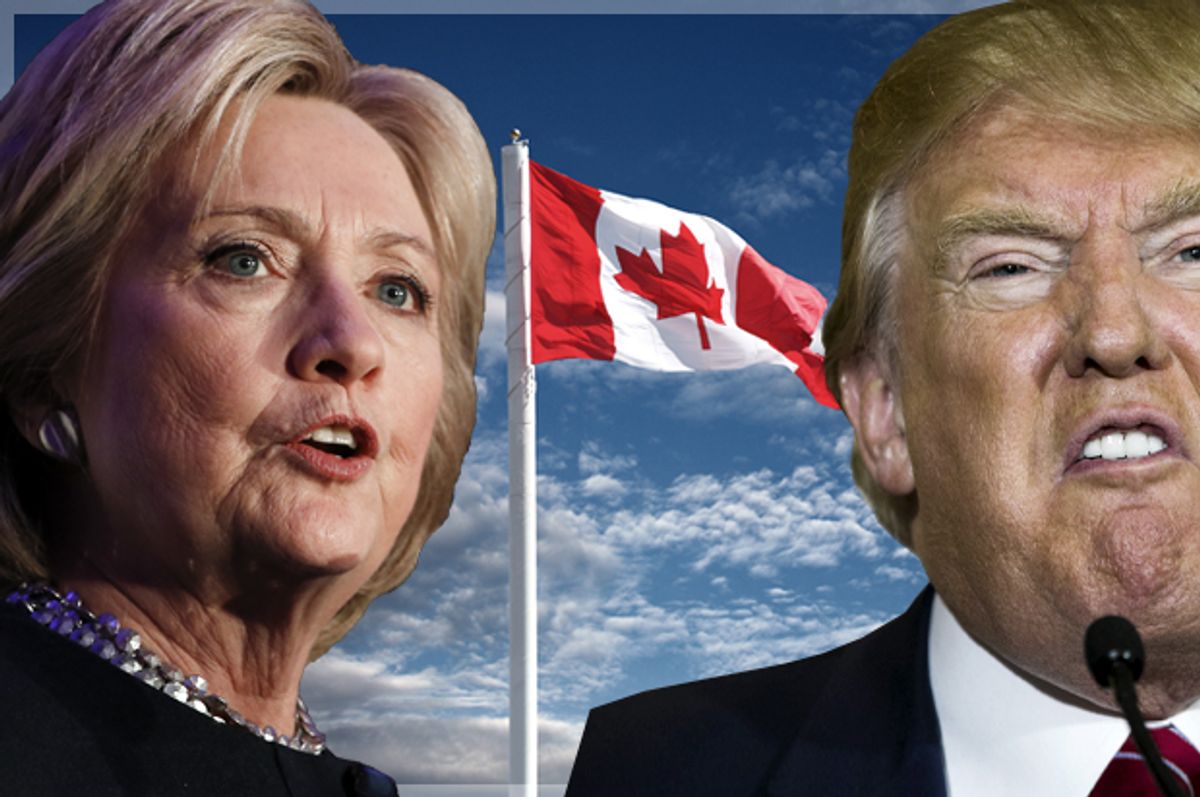 Sometimes I think I’ve adapted successfully to the American way of life. I can tell the temperature in Fahrenheit and without complaint. I have eliminated "shreddies," "smarties" and "ketchup chips" from my diet. I don’t even visibly cringe anymore when a complete stranger stops me mid-sentence to ask, “Did you just say aboot?”

But as a Canadian living in New York through my first presidential election cycle, I have to admit the process has me boggled, and not because of the small-handed, spray-tanned man in the extended red tie. It’s about the excruciatingly long period of time the United States devotes to its presidential election campaign, one of the longest election seasons in the world.

For Canadians, the longest campaign in our history was 89 days -- and that was in 1872. A two-year campaign, which has become the U.S. norm, is nearly incomprehensible. The average length of a Canadian election is 50 days. Last year, when Canada’s election season lasted a full 78 days, concerned headlines wondered whether “Lengthy election could be recipe for Canadian chaos.” The thought of the costs and voter fatigue such a prolonged campaign invokes is enough to send any Canadian’s heart into a cool winter flurry.

Hillary Clinton declared her bid for presidency on April 12, 2015; that was 576 days before Americans would head into the voting booths for the 2016 presidential election. Since Clinton began her campaign, former prime minister Stephen Harper dissolved Canada's parliament, called an election, lost to current Prime Minister Justin Trudeau, and retired from party leadership. While Harper celebrates the one-year anniversary of his ouster from politics, Clinton keeps on delivering her stump speech in an evolving palette of power suits.

Maybe the early preparation and campaigning is a direct consequence of the consistent, predetermined four-year presidential election schedule. Both parties know the election is coming. In Canada, there is no such warning. Elections can be called at any time. And because elections can happen at any point, Anna Esselment, a political science professor at the University of Waterloo, explained, “Nobody wants them going on for a really long time.”

This level of uncertainty makes a long election campaign not only undesirable, but also financially impossible. Said Esselment, “Parties don’t want to go that much longer, because they run out of money. We have far more strict limits on money.”

Yes, much to the bemusement of many Americans, Canadians are limited on spending their brightly colored Monopoly money during election seasons. Citizens and permanent residents can spend a maximum of $1,500 per calendar year on political parties or candidates. Elections Canada also states that corporations and unions are prohibited from making any financial contributions to elections whatever.

There is also direct connection between the funds available and how long a campaign can last. Not only are Canadian voters limited to how much they can donate to candidates and political parties, but law caps how much the parties can spend during a given election cycle. In the 2015 election, for example, the three major political parties could spend a maximum of $54,936,320 each. In total, the 2015 federal election cost $443 million.

Compare that to the cost of the American presidential campaign of 2012: Political parties and political action committees, or PACs, spent almost $7 billion, making it the most expensive election in U.S. history, until now. Financial analysts predict the current race will far surpass the $7 billion mark, if and when it finally ends.

Esselment said the astronomical costs significantly affect the topics brought forth for debate in American elections. “Because money in campaigns is equated to free speech, the person with the most money gets to yell the loudest,” she said. “In the Canadian system, with the spending limit, it’s about creating a level playing field.”

The last two years could indeed be labeled a yelling match. (If you want to transition to a Canadianism, you could call it a kerfuffle.) First with the widely distributed advertisements, then the primaries and caucuses, and finally the presidential debates, the 2016 presidential election is a relentless overload of information and controversy. John Fousek of New York University’s international relations department said, “Each year, it becomes bigger. It expands a little every cycle,” referring to the costs and lengths of the election. “It is that four-year carnival.”

But when I think of a four-year carnival, I think of an endless supply of syrup-soaked beavertails (relax, it’s a pastry) or enjoying fair rides after splitting a two-four of beer bottles with some pals -- not 1,460 days of pageantry-filled politics. And according to the Pew Research Center, most Americans don’t revel in the entertainment that comes with a presidential election either. In a recent study, Pew found that by July 59 percent of Americans already felt exhausted with the election.

“The public doesn’t have a ton of appetite,” Esselment said. “I mean, most people are not that interested in politics.” Fousek said the length of time only serves to add to a wide sense of disillusionment with the political process. The phenomenon the professors described is nothing new. In fact, it has a name: campaign fatigue. Maybe we’re not so different, eh?

In the past few months, my American colleagues searched for reprieves from the ongoing reports of election scandals. During our interview, Fousek, the NYU professor, even highlighted the announcement of Bob Dylan’s Nobel Prize that day. “It helped distract some of us from the election stuff,” Fousek said. "It's always nice to have a reprieve.”

The latest trailer for the movie "Keeping Up with the Joneses" even begins with a voiceover asking: “Election coverage stressing you out? Then treat yourself to the perfect date movie.” This isn’t just an off-the-cuff, playful tagline. The American Psychological Association recently reported that 52 percent of Americans believe the 2016 election is a “very or somewhat significant source of stress in their lives.”

Presidential elections haven’t always taken so long. Although conventions have long been held in the summer leading up to the election, primaries and caucuses only gradually assumed a dominant role in the process. Before the early 1970s, presidential candidates were selected at party conventions; Hubert Humphrey, the 1968 Democratic nominee, had not even been a candidate during the primaries. As Fousek explains, a series of reforms introduced in 1972 led to the "modern primary season," and also to the nomination of Sen. George McGovern, who would lose to Richard Nixon in spectacular fashion.

In Canada, candidates are selected by their respective parties before the election is even called. Because we don’t always know when that next election might be, long primaries and caucuses are simply not feasible.

When a Canadian election is called, Esselment said, “It’s a contest between the parties. Their platforms are released, and then basically the election is a debate about the party platform.”

Esselment admits that there are some advantages to a longer campaign season. She said, “A 36- or 37-day campaign period is a short time for you to sort of show what you do -- to get your message across and get enough attention on yourself.” At the beginning of the 2015 Canadian campaign, Trudeau was polling in third place. Said Esselment, “It was actually helpful for the Liberals to have a 78-day campaign for 2015, because Trudeau was really able to grow in that role.”

In the case of the aforementioned orange-haired, controversy-steeped current Republican candidate, a long election period has exposed more of his disastrous mistakes. Most notably, the recent release of the "Access Hollywood" tape from 2005 revealed Trump’s sexually abusive comments and possible actions. In a shorter election period, that recording might never have reached American voters.

But does a longer campaign mean that American voters are more politically informed than their northern neighbors? Are this country’s citizens more likely to vote than their “hoser” counterparts? (I'm allowed to use that term of loving derision.)

Unfortunately not. The U.S. has an average voter turnout rate of 53 percent, one of the lowest among major democracies worldwide.