Comey's lasting blunder: Why the FBI director's bumbling will live on past Election Day 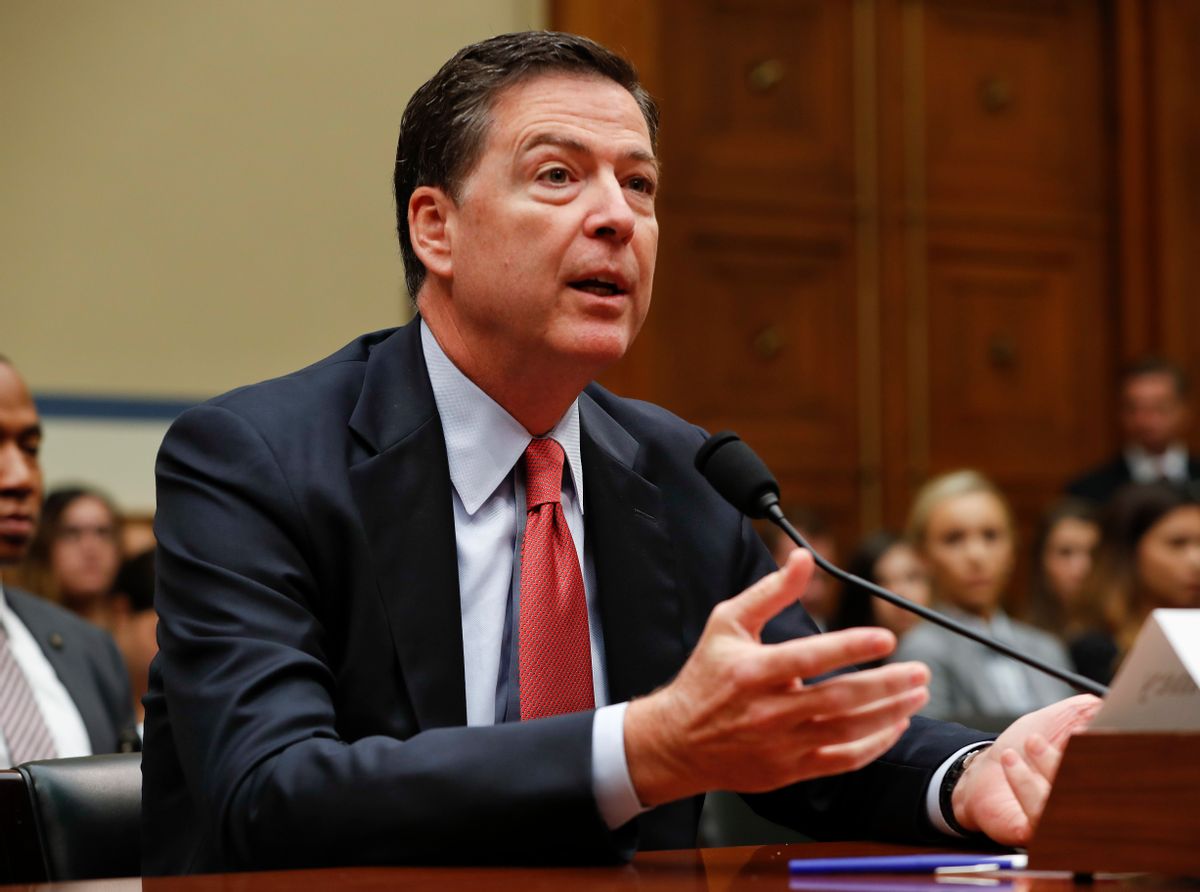 I would love to say good-bye, good riddance and rot in hell to Comeygate. I really would. James Comey, the FBI's director, kicked up a political maelstrom a little more than a week ago with a vague letter to Congress explaining that his agency was reviewing some newly discovered emails pertinent to the investigation of former secretary of state Hillary Clinton’s private email server.

Then this past weekend, he sent another letter to Congress explaining that the emails had been reviewed and nothing important or dramatic had been found. I encourage you to read Gary Legum's post on the various twists and turns that attended this farce.

But as dead as this absurd “scandal” should be, we still can’t bury it under 7 feet of topsoil. Comeygate will persist for a couple of reasons. The first is that Democratic presidential nominee Hillary Clinton is a central character in the plotline, and as 25 years of Travelgate, Vince Foster, cattle futures, Benghazi and Whitewater investigations have taught us, Clinton “scandals” are never granted the privilege of death. The second is that Comey’s bumbling seemed like it was designed to feed into the campaign push by Republican presidential nominee Donald Trump to delegitimize the 2016 presidential election.

I can’t speak to Comey’s motivations in doing what he did, but the overall impact of his late-stage letter-writing campaign has been to leave pretty much everyone across the ideological spectrum disgusted with the FBI in general and its director specifically. For pro-Trump forces, Comey’s behavior will stand out as “proof” that shadowy forces are working within the government to shield Hillary Clinton from a candidacy-ending indictment.

Consider, for a moment, the political environment into which Comey injected himself. His agency recommended in July that Clinton not face criminal charges for the way she handled potentially sensitive information on her private email server. In the months that followed, Trump and his minions pointed to Comey’s refusal to pursue the case any further as evidence that the system is rigged.

“Everybody thought based on what was being said she was guilty. She was guilty. And it turned out that we're not going to press charges. It's really amazing,” Trump said at a July rally. “We have a rigged system, folks.”

Then out of the blue and at a politically auspicious moment, Comey pops up with this letter about new emails that surfaced Oct. 28. Trump and his followers were ecstatic. The system “might not be as rigged as I thought!” Trump said after the Comey letter dropped. TrumpWorld assumed that Comey would not have come forward the way he did unless he knew something big — an assumption that wasn’t entirely illogical, even if it was built on a foundation of self-serving hypocrisy. “

So put yourself in the position of a Trump supporter for a moment. You’ve been fed a steady diet of vitriol about the FBI’s compromised investigation against Clinton, and then all of the sudden here’s the agency director sending a strong hint that another shoe is about to drop. Not only that, he’s doing it mere days before the election. Something is happening, the corruption is about to exposed, the Democratic candidate is about to receive the justice you believe she has unfairly alluded.

It all deflates in an instant as Comey, who endured a week of stinging criticism from Democratic officials and liberals (and more than a few Republicans, I must note), announces that there is no shoe, and it will not be dropping after all.

The reaction from the Trump-osphere was predictable: The system, after spending a few brief days as potentially un-rigged, was back to being rigged again. And Trump supporters, already coached to believe that a conspiracy was afoot, fell back hard onto the idea that Comey’s brief fit of conscience was knuckled under by the Clintons or Barack Obama or both.

These developments don’t bode well for the political environment in the (far-likelier-than-not) event of a Trump loss on Election Day. Comey had already earned the ire of anti-Clinton people for declining to pursue charges over the summer, but by going in for another kick at the hornet’s nest so close to the election, he sent Trump supporters off on an expectant emotional high before disappointing them once again.

That’s why Comeygate will enjoy life long after the voting is done. Comey has turned himself into a focal point for people who want to believe that the 2016 presidential election is shot through with conspiracy and fraud. Whatever Comey’s motivations, this group of people who already distrust the “system” are now angrier than they otherwise would have been heading into Election Day.

Trump supporters have been encouraged by the candidate to believe there was a government conspiracy to aid Hillary Clinton and keep her presidential candidacy alive, and Comey’s blundering, intentionally or otherwise, has only served to validate those dark suspicions.